WITH more than 600 muscles and approximately 206 bones – there are a ton of parts to the human body that go into keeping a person alive.

And organs are at the centre of all this action – with each one having a specific purpose that allow us to perform many of life’s basic functions. 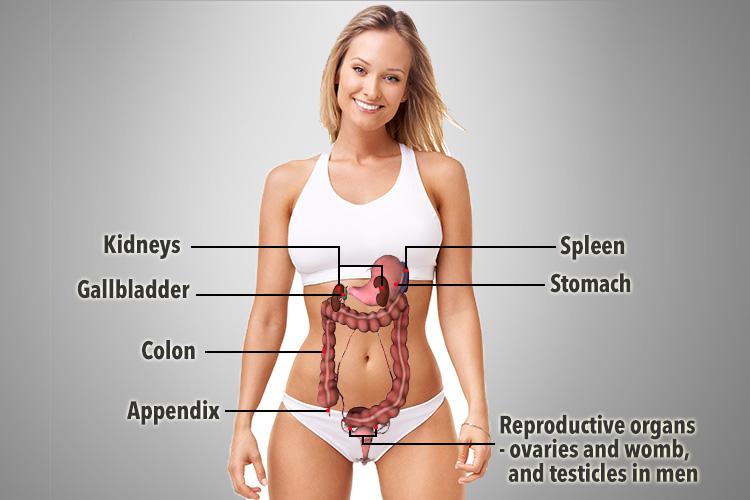 Despite this, there are some organs that the body is perfectly capable of carrying on without.

And thousands of people worldwide have or are currently living without organs that were once considered vital – due to a combination of evolution and medical advancements.

Here Adam Taylor, Director of the Clinical Anatomy Learning Centre at Lancaster University, writes for The Conversation about which organs can be considered as “non-vital”.

This organ sits on the left side of the abdomen, towards the back under the ribs.

It is most commonly removed as a result of injury.

Because it sits close the ribs, it is vulnerable to abdominal trauma.

It is enclosed by a tissue paper-like capsule, which easily tears, allowing blood to leak from the damaged spleen.

If not diagnosed and treated, it will result in death.

When you look inside the spleen, it has two notable colours.

A dark red colour and small pockets of white. These link to the functions.

The red is involved in storing and recycling red blood cells, while the white is linked to storage of white cells and platelets.

When the stomach is removed, surgeons attach the oesophagus (gullet) directly to the small intestines. With a good recovery, people can eat a normal diet alongside vitamins

You can comfortably live without a spleen.

This is because the liver plays a role in recycling red blood cells and their components.

Similarly, other lymphoid tissues in the body help with the immune function of the spleen.

The stomach is sometimes surgically removed as a result of cancer or trauma.

In 2012, a British woman had to have her stomach removed after ingesting a cocktail that contained liquid nitrogen.

When the stomach is removed, surgeons attach the oesophagus (gullet) directly to the small intestines.

With a good recovery, people can eat a normal diet alongside vitamin supplements.

The primary reproductive organs in the male and female are the testes and ovaries, respectively.

These structures are paired and people can still have children with only one functioning.

The removal of one or both are usually the result of cancer, ovarian cancer for example, or in males, trauma, often as a result of violence, sports or road traffic accidents.

In females, the uterus (womb) may also be removed.

This procedure (hysterectomy) stops women from having children and also halts the menstrual cycle in pre-menopausal women.

Research suggests that women who have their ovaries removed do not have a reduced life expectancy.

Interestingly, in some male populations, removal of both testicles may lead to an increase in life expectancy.

4. The colon or large intestine

The colon is a tube that is about six-feet in length and has four named parts: ascending, transverse, descending and sigmoid.

The primary functions are to re-absorb water and prepare faeces by compacting it together.

The presence of cancer or other diseases can result in the need to remove some or all of the colon.

Most people recover well after this surgery, although they notice a change in bowel habits.

A diet of soft foods is initially recommended to aid the healing process.

The gallbladder sits under the liver on the upper-right side of the abdomen, just under the ribs.

It stores something called bile.

Bile is constantly produced by the liver to help break down fats, but when not needed in digestion, it is stored in the gallbladder.

However, excess cholesterol in bile can form gallstones, which can block the tiny pipes that move bile around.

When this happens, people may need their gallbladder removed.

The surgery is known as a cholecystectomy. Every year, about 70,000 people have this procedure in the UK.

Many people have gallstones that don’t cause any symptoms, others are not so fortunate.

The appendix is a small blind-ended worm-like structure at the junction of the large and the small bowel.

Initially thought to be vestigial, it is now believed to be involved in being a “safe-house” for the good bacteria of the bowel, enabling them to repopulate when needed.

Due to the blind-ended nature of the appendix, when intestinal contents enter it, it can be difficult for them to escape and so it becomes inflamed. This is called appendicitis.

In severe cases, the appendix needs to be surgically removed.

A word of warning though: just because you’ve had your appendix out, doesn’t mean it can’t come back and cause you pain again.

There are some cases where the stump of the appendix might not be fully removed, and this can become inflamed again, causing “stumpitis”.

People who have had their appendix removed notice no difference to their life.

Most people have two kidneys, but you can survive with just one – or even none (with the aid of dialysis).

The role of the kidneys is to filter the blood to maintain water and electrolyte balance, as well as the acid-base balance.

It does this by acting like a sieve, using a variety of processes to hold onto the useful things, such as proteins, cells and nutrients that the body needs.

More importantly, it gets rid of many things we don’t need, letting them pass through the sieve to leave the kidneys as urine.

There are many reasons people have to have a kidney – or both kidneys – removed: inherited conditions, damage from drugs and alcohol, or even infection

There are many reasons people have to have a kidney – or both kidneys – removed: inherited conditions, damage from drugs and alcohol, or even infection.

If a person has both kidneys fail, they are placed onto dialysis.

This comes in two forms: haemodialysis and peritoneal dialysis.

SPLEEN TO BE BELIEVED


Your stomach… and six other major organs you can survive WITHOUT


Hospital staff form guard of honour for dying girl, 2, about to donate organs


My baby needs a new heart… without it, he will die before he turns two


Dad, 28, who died of brain tumour has saved 5 lives after donating organs

Both methods draw waste out of the body.

If a person is placed on dialysis, their life expectancy depends on many things, including the type of dialysis, sex, other diseases the person may have and their age.

Recent research has shown someone placed on dialysis at age 20 can expect to live for 16-18 years, whereas someone in their 60s may only live for five years.

Adam Taylor is a lecturer in anatomy at Lancaster University and the piece originally appeared on and is republished here with the permission of The Conversation.

Who was Tony Britton, how was he related to Fern Britton and what were...

When are the Rugby World Cup quarter-finals? Fixtures and schedule | Rugby | Sport

Three’n’wheezy as Great Britain huff and puff in defeat

CRIMINALS are free to commit fraud because cops are inadequately equipped to probe it, a report claims. No police force can cope with the...

‘Unhealthy’ curry houses are being shunned by millennials with half of Indian takeaways predicted...

TRADITIONAL Indian restaurants are failing to curry favour with millennials, a top chef warns. He says they need to be korma chameleons to cope...

‘Red Wall’ MPs appear in video telling PM how they could use HS2 funds...

New ‘Red Wall’ MPs have appeared in a Youtube video telling the Prime Minister where they can spend cash saved from HS2 in...

Limassol is a Cypriot city fit for a king with its stunning scenery and...

SOAKING up the sea views from the top of Limassol Castle, I could see why this was the hottest ­destination wedding venue of...

Bexley pool: Mum barred entry because she had three kids under...

Spanish press hail Rodrygo as a gift ‘from the sky’ after...

‘Unhealthy’ curry houses are being shunned by millennials with half of Indian takeaways predicted...