DEONTAY WILDER will defend his WBC world title against Luis Ortiz for a second time this Saturday night.

The two faced off in March 2018, with Wilder coming out on top with a 10th-round TKO to keep hold of the belt – but the Bronze Bomber was ROCKED in the eighth round for the first time in his career.

Following a draw against Tyson Fury and victory over Dominic Breazeale, Wilder is back in the ring with the Cuban, defending not only his title but also a 42-fight unbeaten record.

The American is then expected to complete his tenth defence of the WBC heavyweight crown with a rematch against the Gypsy King set for 2020.

When is Wilder vs Ortiz 2?

Most Read In Boxing


Floyd Mayweather says he is 'coming out of retirement in 2020'

What TV channel is it on and can I live stream it?

Wilder vs Ortiz will be shown live on Sky Sports Action, with coverage underway from 2am on Sunday.

Sky Sports customers can live stream this fight via the app on their computer, tablet and mobile devices.

Alternatively, you can purchase a Sky Sports Day Pass from NowTV for £9.99.

How do the fighters compare? 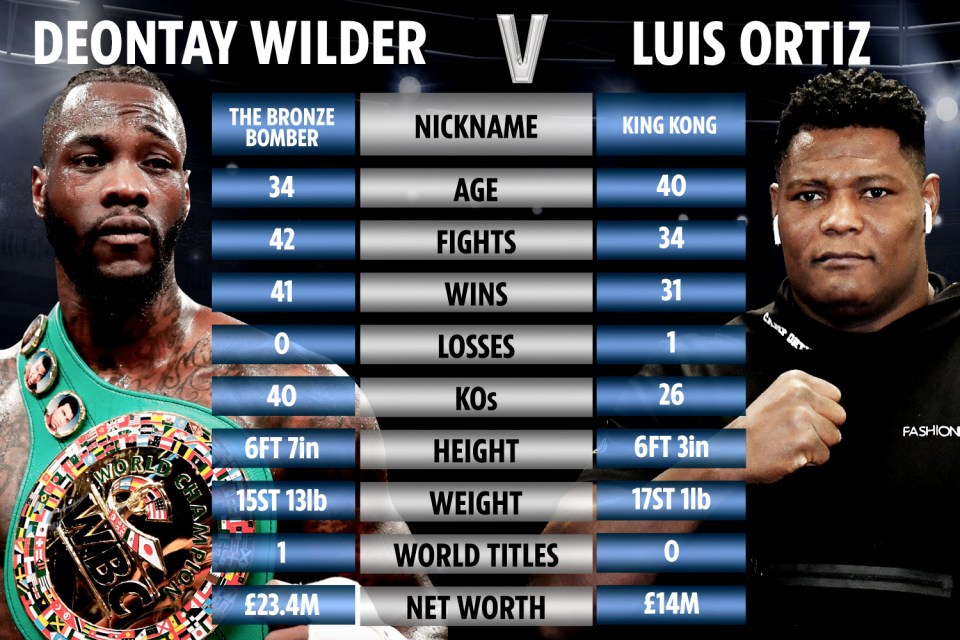 Who is on the undercard?

Before that, Leo Santa Cruz and Miguel Flores battle it out for the vacant WBA super featherweight crown.

Cheltenham Betting Offers and Free Bets: Get the best free bets for the Cheltenham Festival 2020

Woman stunned as she watches ‘cheating’ boyfriend agree to have sex with her MUM...

IF YOU suspect your partner of having strayed, it can often be difficult to prove your instincts are right. But one woman was left...

Eczema treatment: How to prevent a flare-up during exercise – key tips

Eczema comes in many forms but the most common type is atopic eczema, a condition that is characterised by dry, itchy, cracked skin....

MAN CITY defender Aymeric Laporte parked his £100,000 Range Rover on double yellow lines before dancing with his pals on the pavement. The Frenchman...

Cheltenham Betting Offers and Free Bets: Get the best free bets for the Cheltenham...

WHAT better way to start the festival than with lots of free bets. We have done the hard work for you and gathered the...

Parkinson’s disease symptoms: Small handwriting could be a sign of the condition

Woman stunned as she watches ‘cheating’ boyfriend agree to have sex with her MUM...

Eczema treatment: How to prevent a flare-up during exercise – key tips