Home News Tottenham’s incredible slump revealed with most losses in 2019 out of any...

THE STUNNING 7-2 defeat to Bayern Munich on Tuesday meant no Premier League side has lost more games than Tottenham in 2019.

A difficult calendar year comes in great contrast to their solid start to last season, where they won 15 of their opening 20 Premier League games. 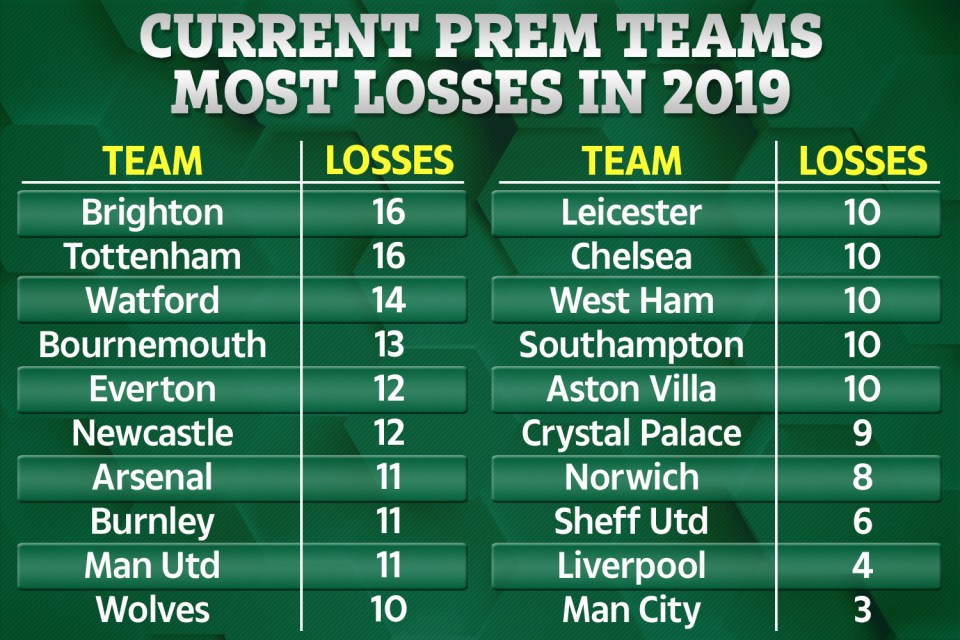 The turn of the year has seen a dramatic downturn for Mauricio Pochettino’s side with a whopping 16 matches lost in all competitions.

Things got off to a bad start with a January 13 defeat to Manchester United in the league before being knocked out of both the League and FA Cup in the proceeding fortnight.

February and March featured a pair of defeats each before a dismal four losses arrived in April, in spite of them progressing through the Champions League knockout rounds.

A plethora of teams managed to get one over Spurs as the season came to a close, from away days at Manchester City and Liverpool to home games against Ajax and West Ham.

Spurs still managed to finish fourth amid their rivals’ similar collapses as well as reaching the Champions League final.

But things didn’t improve much after the summer. 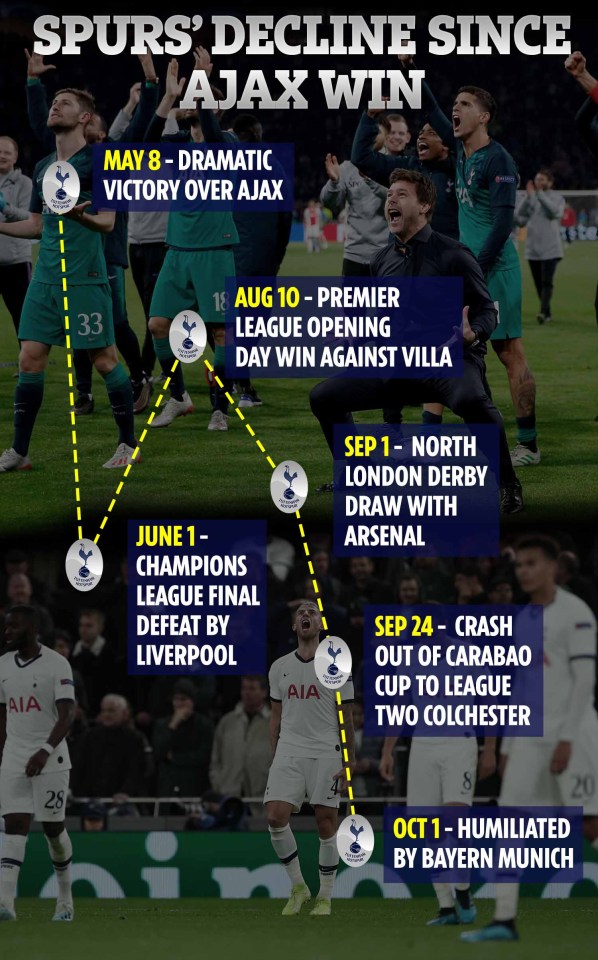 Newcastle, Leicester and Colchester have all claimed victories over Tottenham by October as Poch feels the pressure.

A record of three victories, three draws and four defeats in 2019/20 is hardly that of an ambitious team – with no wins claimed on the road so far.

Interestingly, Saturday sees Spurs rock up at Brighton, the only other Premier League team with 16 losses to their name this year.

Graham Potter’s side have failed to win since their opening day thrashing of Watford and defeat for Spurs could send shockwaves through the club.


Why is Arsenal's match against Vitoria being played on a Wednesday?


Transfer News LIVE – All the latest updates and gossip

The podium is also filled with the usual suspects, Manchester City being beaten just three times in ten months.

Liverpool aren’t far behind, on four defeats, before newly-promoted sides Norwich and Sheffield United show how their strong form has carried into the top-flight, with six and eight respectively.

Daily horoscope for Saturday January 25 — here’s what the stars have in store...

ARIES March 21 to April 20 The most rewarding and thrilling part of your weekend could be a get-together you think is routine. Because it...

"We are profoundly saddened to announce the passing of our friend and founder, Clayton Christensen. We are better people for knowing him," the...

911 calls of men ‘chained in basement’ of ‘Grindr killer’ who claims he ate...

HYSTERICAL 911 calls made by men fleeing the home of accused Grindr murderer Mark Latunski – months before he ‘killed a man and...

Sense at last LIFE must be bewildering for Remain ­diehards still convinced Brexit was a ­racist vote to keep foreigners out. Our “Vote Leave” Government...

GYMNASTICS is a multi-skill sport that requires an immense amount of strength, flexibility, balance and coordination. It also requires a lot of practice: to...

Stomach bloating: The red flags that your bloating could be celiac...

Daily horoscope for Saturday January 25 — here’s what the stars have in store...

911 calls of men ‘chained in basement’ of ‘Grindr killer’ who claims he ate...