Who is the guy from the Subway advert? Meet the Kiwi actor in new campaign
Kim Kardashian is her own best advert as she shows off hourglass figure in Skims ensemble
Maura Higgins sets pulses racing as she slips into sexy lingerie for new Ann Summers advert

He quit the cast of Neighbours last year ahead of the arrival of his first child.

And three months on, Tim Robards is back to work as an actor – this time taking on the role of the iconic Tim Tam genie in a new advertising campaign.

The former Bachelor, 38, who played Pierce Greyson on Neighbours, flaunts his Adonis-like physique in a TV commercial which debuted this week.

The advert begins with Tim magically appearing in a glamorous woman’s lounge room, then asks her: ‘What will it be tonight?’

He leans against the banister of a fireplace as he awaits the woman’s reply.

‘I just want a relaxing night on the couch,’ she responds, before Tim snaps his fingers and a knight in shining armour appears on the sofa next to her. 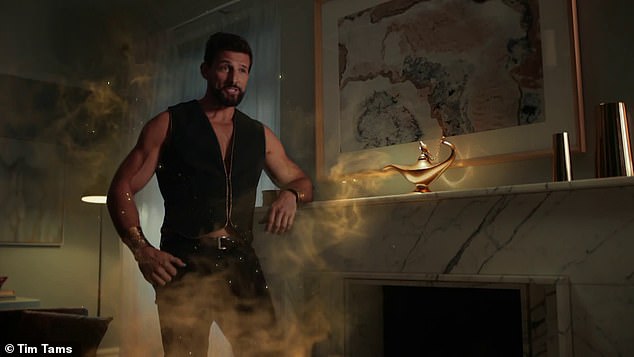 New gig: Tim Robards (pictured), 38, is starring on latest reincarnation of Tim Tam’s genie ad, where he flaunts exactly what he’s worked so hard in the gym for. His biceps and chest is on show after magically appearing in the loungeroom of a woman when she exclaims ‘I’m home’ 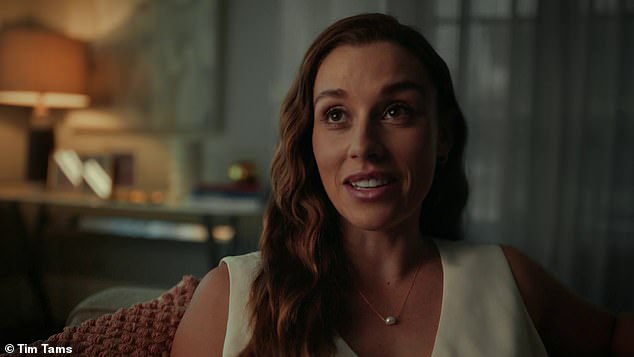 Who’s in the ad with him? Tim is dressed in a short black vest, matching jeans, belt and gold cuffs – and sensually looks at the woman (pictured) before asking: ‘What will it be tonight?’

‘Perhaps something a little bit more irresistible?’ the woman adds.

Tim snaps his fingers again and the knight’s knight disappears to reveal a handsome blond-haired man underneath.

‘Not bad,  but…’ the woman says, as she pushes an empty packet of Tim Tams on the coffee table in front of her. 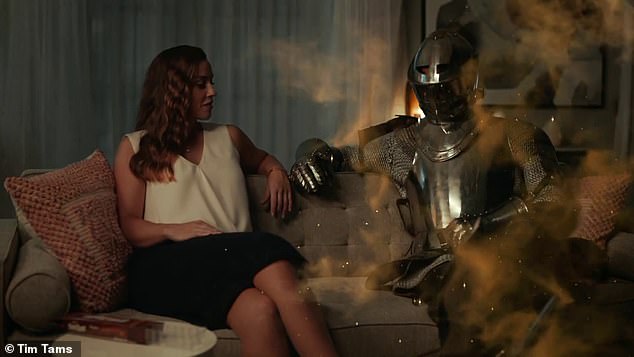 ‘I just want a relaxing night on the couch,’ she responds, before Tim snaps his fingers and a knight in shining armour appears on the sofa next to her 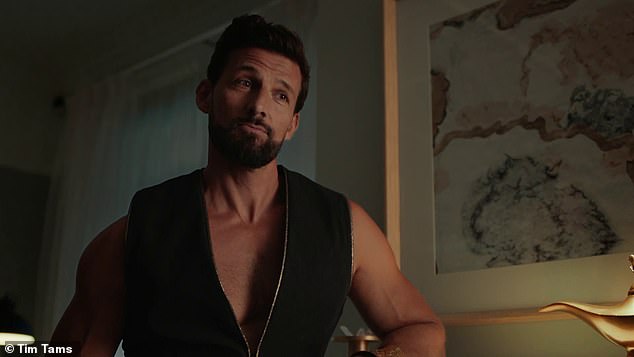 Another wish granted: Inquisitively looking at her, Tim snaps his fingers again and the helmet of the knight disappears – unveiling a handsome blonde man underneath

She eats the biscuits and a tagline reads, ‘What more could you wish for?’

Tim is the latest celebrity to star in the Arnott’s Biscuits ad, following in the footsteps of Bachelor contestant Apollo Jackson in 2018 and actress Cate Blanchett in 1994. 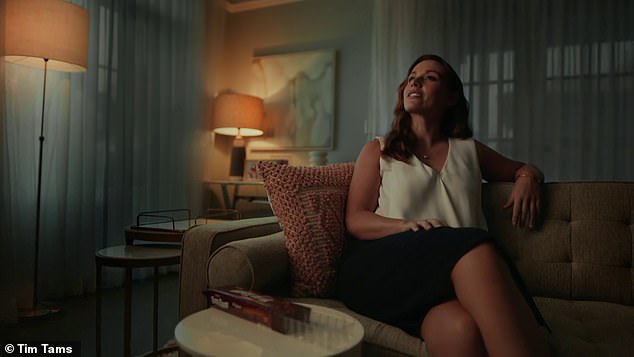 ‘Not bad… but,’ the woman says, while pushing an empty packet of Tim Tams on the coffee table forward. Tim clicks his fingers again, granting the third wish of the woman and re-filling the Tim Tam packet 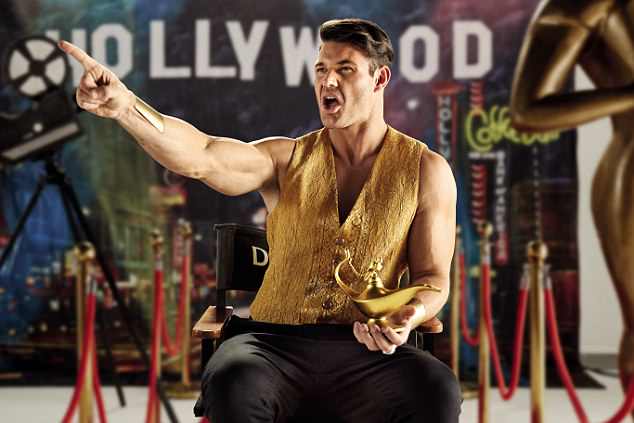 Who else has starred? Tim is the latest celebrity to star on the Arnott’s Biscuits ad, following former Bachelor In Paradise star Apollo Jackson (pictured) in 2018 and Cate Blanchett in 1994

Grandma chases down, tackles thief who stole her purse 0

Italy on brink: Crisis hits Rome as ex-PM orders ALL ministers to resign from coalition 0