Who, in soapland, won’t be glad to see the back of 2020? They (like the rest of us) aren’t out of the woods where Covid is concerned, but there’s a

Amy Schumer splashes about in black as she enjoys Christmas at the beach with family in St. Barts
Shilpa Shetty Is Drooling Over This Decadent Dessert In Goa, Guess What It Is! (See Pic)
EastEnders viewers cry after soap airs touching tribute to Dame Barbara Windsor


Who, in soapland, won’t be glad to see the back of 2020? They (like the rest of us) aren’t out of the woods where Covid is concerned, but there’s a glimmer of light in what has been a very dark tunnel.

At least some people had a merry Christmas – Emmerdale’s Chas and Paddy, Corrie’s David and Shona, EastEnders’ Jay and Honey… up to a point. It was a festive time for couples, and as the New Year approaches, can we expect more of the same? Will Corrie’s Sarah and Adam get back together (and will Sarah realise someone stole Harry months ago?).

Will EastEnders’ Max persuade Linda to leave Mick? (What would it take… a Mars bar?) Is love in the air for Emmerdale’s Marlon and Rhona? (Fifth-time lucky marriage for Marlon, or is he heading for dead wife number three?)

My romantic hopes for 2021 are pinned on EastEnders’ Kat and Phil – yes, seriously. My guess is their animosity will turn to grudging respect, and then a romp on a dodgy sofa.

With Davood Ghadami (Kush) leaving the show, Kat will need a replacement. Heaven forbid she could go a week without a man. 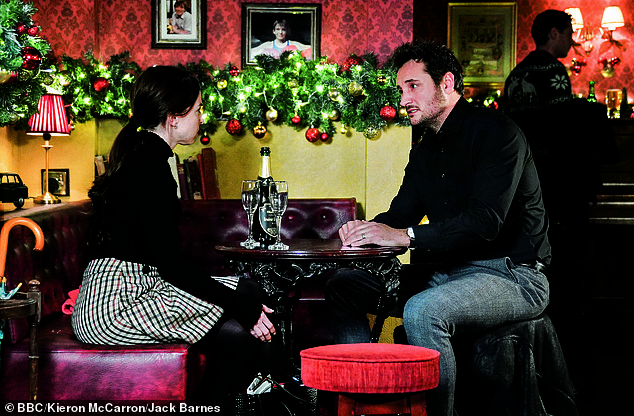 When you spend Christmas with your ex, it’s going to take a lot more than a bottle of cheap Champagne to placate your current wife, surely? A vineyard in the Champagne area of France would be a start; maybe two, if Ruby finds out Martin lingered just a little too long when Stacey kissed him (social distancing, people!).

Still, with the mix-up over the presents sorted and Stacey suitably humiliated, it looks as if Martin and Ruby are back on track – until she drops a bombshell.

Order that second bottle, Martin; you’re going to need it. And when you tell Ruby you want to be friends with Stacey because she understands you, forget bottles; Ruby will need hooking up to the vine.

Scary as Denise finds Lucas, it’s great to see Don Gilet back on the show. Yes, the character is an ex-druggie and serial killer, but who isn’t in soapland these days; everyone has their faults.

Will Jack come over all protective, when Denise confesses she’s terrified of her ex? He may not get the chance, because he’s suddenly called to the Vic on an urgent mission.

Has there ever been a more busy, industrious copper? Has the Walford force never heard of back-up? 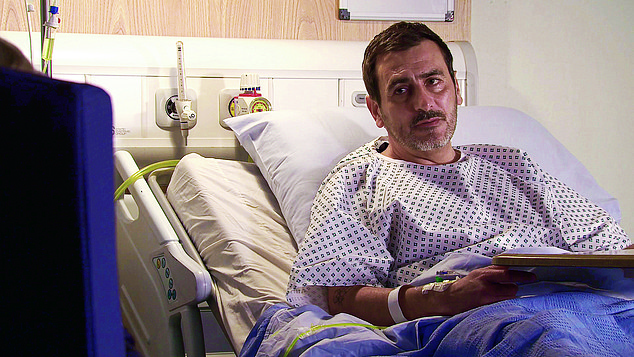 Ken rushes Peter (pictured) to the hospital, after Daniel finds him covered in blood and vomiting after a serious relapse in Coronation Street

Talk about milking a set! With Oliver’s sad demise, a hospital is the last place we want to see. But we’re back there, this time with Peter who, after a serious relapse, appears to be in the throes of liver failure after Daniel finds him covered in blood and vomiting.

Ignoring Daniel’s instruction not to tell anyone (a red rag to get your megaphone out in Weatherfield), Adam informs Ken, who rushes to the hospital (pictured). Ken is devastated when Peter tells him he is sure he is at death’s door (Dry January, anyone?).

He’d have been there a lot sooner if he’d discovered how much cheaper the local Co-op’s booze is compared to Dev’s. At least on Monday, David the dog proved he was still alive.

There’s good news when the planning officer rules against the development. Just as well. Did you see the size of that bulldozer that arrived at the brewery? It was bigger than the set, which it looked in danger of knocking down. Suffice it to say the operator was no Lewis Hamilton.

Todd continues to cause friction between Billy and Paul and manoeuvres events to get Paul arrested.

Fooled, Billy clearly thinks his ex walks on water – but if you’ve fallen for that story once, you will do again. Just get him to turn water into wine; that’s the real test (and the only one that matters. Ask Peter).

EMMERDALE: SPANNER IN THE PERKS 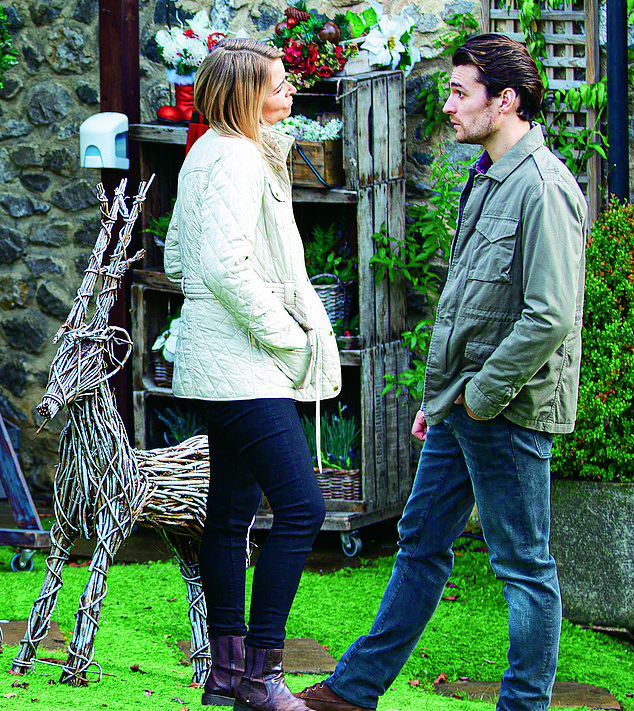 Desire overcomes people in the strangest places in this village. Take Charity. There she is, happily trying to conduct a robbery with sidekick Mack, when she is forced to knock the driver out with a spanner.

Does she panic? No. She and Mack start going through the loot, flirting, and lean in for a kiss. She’s really not fussy, is she?

Elsewhere, are we about to witness a resurrection of Vestrygate, when Charles the vicar turns up looking for Harriet? Keep your dog collar on a tight leash, mate; she has form. Stay away from the vestry; the chalice and hymn books have seen enough.