There are many ways to make a body ‘disappear’ in soapland, and burying someone underground is the most popular.EastEnders’ Dirty Den was deposited


There are many ways to make a body ‘disappear’ in soapland, and burying someone underground is the most popular.

EastEnders’ Dirty Den was deposited under the Queen Vic cellar floor, but given that the show had already resurrected him once, we couldn’t be sure dead actually meant dead. Then there was Owen Turner, buried under a memorial tree.

Brookside’s Trevor Jordache was left lurking under a patio after being stabbed to death, and to this day I am suspicious of anyone without a spouse who has a nice terrace.

Corrie’s John Stape buried Colin Fishwick, the man whose identity he had stolen, beneath Underworld as it was being rebuilt, and Patricia Hillman – wife of serial killer Richard – was buried under wet concrete at a building site.

More recently, Callum Logan endured a spell under the floor in Gail’s granny annexe (far preferable to being above it, in my book), and now we wait with bated breath to see if Rick Neelan’s body will be found in the woods where Gary buried it.

Yes, Corrie wins hands down for buried bodies. Did the Granada props department get a job lot of shovels going cheap? 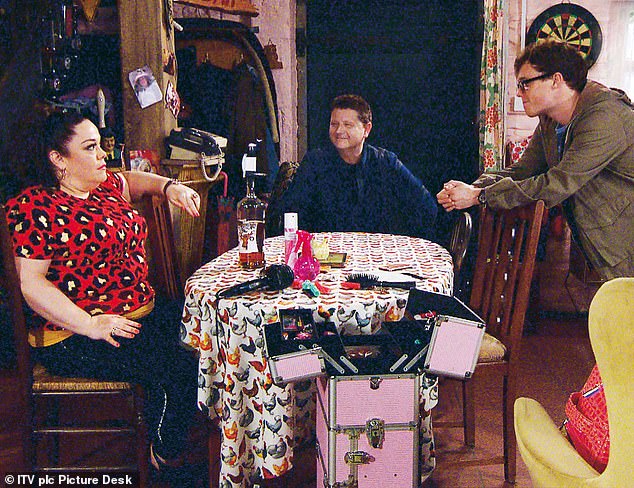 Mandy, Paul and Vinny (pictured) bond, as well as Tracy discovers she’s pregnant while getting her wrist checked out in this week’s Emmerdale

Mandy, Paul and Vinny make a rather pleasing little trio. I mean, I’m not saying they should form a band or anything, but it’s good to see Mandy in a family setting other than the usual Dingle one that involves breaking the sound barrier with non-stop yelling.

This new domestic… er, bliss would be pushing it a bit… contentment, shall we say, also gives Mandy a decent love interest who seems relatively normal compared to the psychos and muppets in the village of late.

Sometimes, you can’t help feeling they should rename the show Fraggle Rock. Alas, it looks as if a spanner is about to be thrown in the works when Gabby hears that Bernice is selling the salon.

We know that in this village, a spanner is never a spanner; it’s a storm of toolboxes falling from above, and now Mandy is worried about losing her job.

There’s also a shock for Nate and Tracy when, getting her wrist checked out at the hospital, Tracy discovers she’s pregnant.

For a young man, Nate really gets himself into complicated relationships. Ever thought about just hopping on a plane and going to Vegas with your mates, Nate? 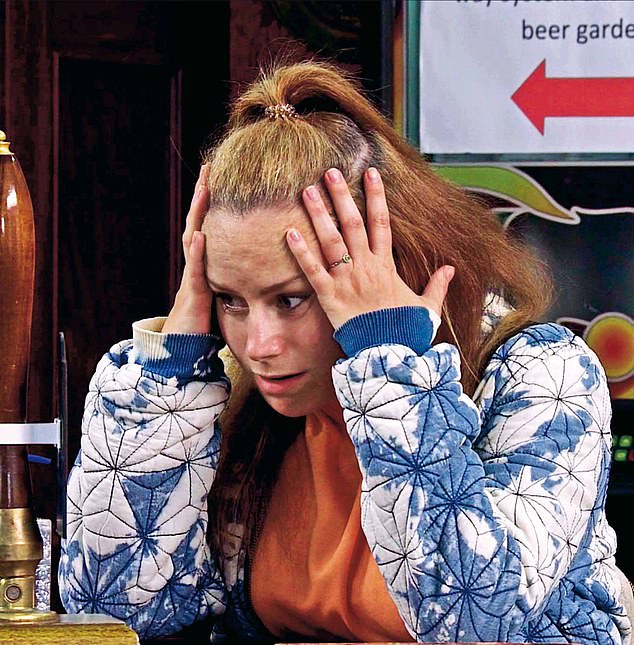 The signs of coronavirus are everywhere – Sally’s rubber gloves, Jenny’s hand sanitiser, the B&B being shut, social distancing in the Kabin, pointed references to the great work being done by the NHS, and not a character over 70 in sight.

The biggest noticeable change, however, is no quads. Presumably, most young children are considered too vulnerable to be on set and incapable of keeping six feet apart from anyone.

So, for the moment, we are not subjected to the usual cacophony of screaming infants, while Gemma’s not tearing her hair out and is now having a very nice time in her new role as a mum.

On Monday, she even managed to have a laugh with Bernie while hanging out the washing (when will someone tell her that she needs at least one more line, by the way? That one is barely long enough for a couple of flannels, let alone the laundry for four babies).

When Abi is upset that her twins are bound for Australia, Gemma insensitively tells her that it would kill her to be separated from her quads. It’s not that long ago she was talking of killing them, so it’s quite a turnaround.

Abi is understandably upset, and when Gemma later apologises, Abi explains she’s trying to put the twins first and not be selfish.

At least she still has Seb, though if he keeps hanging round Alina like a limp lettuce leaf, Abi might be setting up a Go Fund Me to get him a one-way ticket to Sydney, too; at the moment, I’d be happy to contribute. 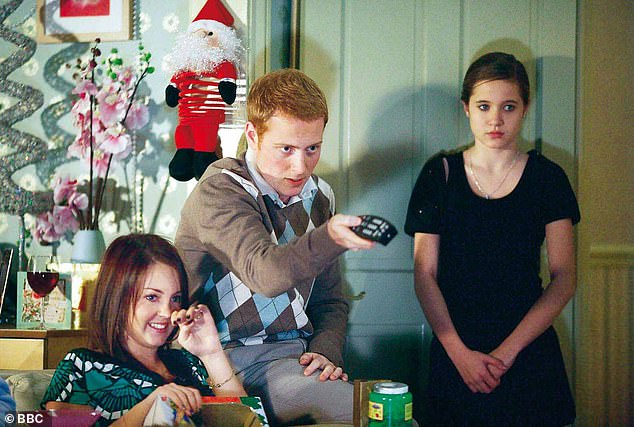 Bless him, it wasn’t hard for Bradley to see red – every time he looked at his hair and permanently blushing cheeks in the mirror, in fact.

And the day is going so well… after Bradley excitedly opens his cufflinks from Stacey (he’s easily pleased – his choice of wife tells you that), she has the ultimate gift.

‘I know what I’m gonna give you next year,’ she coos. ‘A bair-bee.’ Thankfully, the intervention of the DVD saves us from having to see them try for one.

Elon Musk says 'China rocks' while the U.S. is full of 'complacency and entitlement' 0

Twitter users mock CNN over story on cancer screening for 'individuals with cervixes': 'You mean women?' 0

X-Men: Days Of Future Past arrives on Disney+ with nudity and profanity UNCENSORED 0