They claim a blunder by probation officers meant he was let out of jail early — and free to attack them.

It means taxpayers would be left to foot the bill after McCann, 34, unleashed a two-week campaign of sex attacks.

There were 11 victims in all. Farleys Solicitors, in London, are representing five, with the possibility of each getting around £100,000 minimum compensation.

The firm also wants to help the six other victims, meaning they could sue for more than £1million in total.

They are claiming negligence, breach of duty and breach of the Human Rights Act. Farleys’ Jonathan Bridge said: “What happened to the victims could have been prevented.”

McCann was caged in 2008 with a sentence of Imprisonment for Public Protection (IPP).

He was freed on licence in 2017 and committed a burglary. 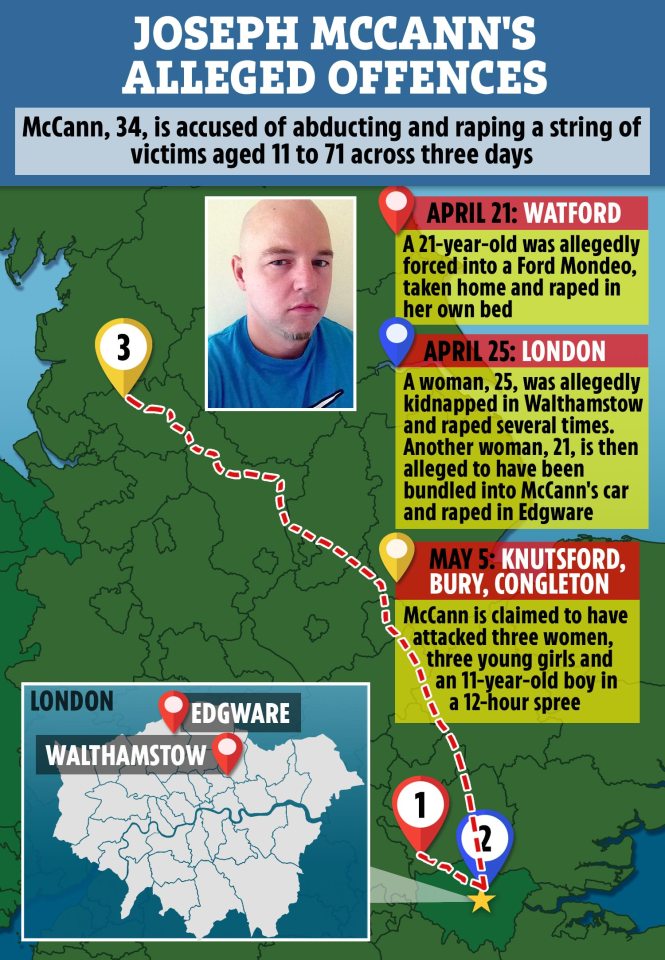 most read in news

That offence should have triggered a recall to jail under the terms of his IPP sentence. But he was given a determinate sentence — meaning he was released in February 2019, halfway through a three-year term. Two months later his sex attacks began.

If probation officers had referred McCann to the Parole Board, it is unlikely he would have been released.

Last month he was given 33 life sentences.

Labourer’s privates grabbed by supervisor who asked ‘is it true what they say about black men?’

Labourer’s privates grabbed by supervisor who asked ‘is it true what they say about...

A BLACK labourer who was taunted over the size of his manhood is set for a massive compensation payout. Alwayne Thompson, 39, had his...

KIM Kardashian was whisked away to an exotic oceanside villa in Mexico by husband Kanye for an epic Valentine’s day surprise. The Skims founder,...

Man City failing to get Uefa ban lifted could set Citizens back YEARS in...

MANCHESTER CITY’S appeal is about more than just staying in the Champions League — it is about stopping the break-up of their brilliant...

JUVENTUS legend Alessandro Del Piero claims it is Pep Guardiola’s destiny to boss the Italian club. But they face a fight to get him...

Vitamin B12 deficiency: Symptoms include irritability and depression

Cashed up schools: how does your child’s compare?

Labourer’s privates grabbed by supervisor who asked ‘is it true what they say about...