SCIENTISTS have worked out the safest places for you to be if a sudden global pandemic threatens to wipe out humanity.

They focused on islands because they are naturally isolated from the spread of contagion and used a variety of criteria to rank where humans could best ride out the storm and rebuild civilisation. 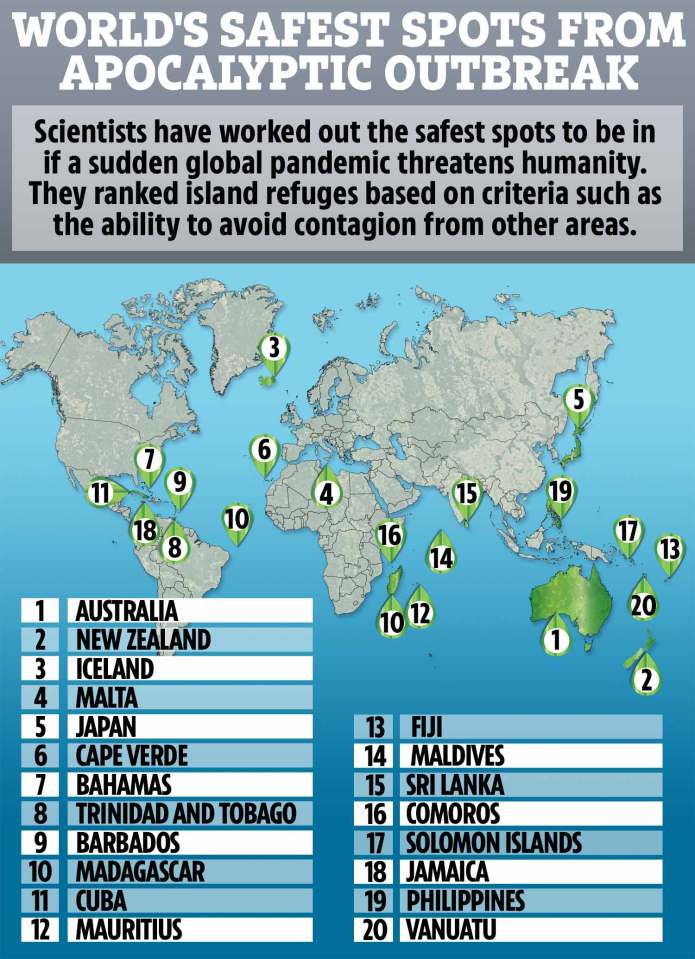 Nations were scored from 0-1 based on whether they had features that could make them a doomsday refuge, such as a good physical location, natural resources and political harmony.

The authors concluded in their paper: “The island nations of Australia (0.71) followed by New Zealand (0.68) and Iceland (0.64), appear most likely to have the features required to act as an effective refuge in the face of a catastrophic global pandemic, from which large-scale technological society can be successfully rebuilt.”

The other 16 countries ranked less than 0.5 so were less suitable for securing humanities survival.

If a viral, bacterial or fungal apocalypse was to break out right now, the places listed are probably your best bet at safety[/caption]

Public health physician Nick Wilson from the University of Otago in New Zealand explained: “Discoveries in biotechnology could see a genetically-engineered pandemic threaten the survival of our species.

“Though carriers of disease can easily circumvent land borders, a closed self-sufficient island could harbour an isolated, technologically-adept population that could repopulate the Earth following a disaster.”

Small island populations weren’t considered in the study because, although they may survive without assistance, the researchers think a diverse range of technical experts would be needed on an island in order to rebuild humanity.

This is why only independent sovereign states recognised by the United Nations with populations of over 250,000 people were considered.

The researchers said: “Somewhat unsurprisingly, it was nations with high GDP (gross domestic product), that are self-sufficient in food and/or energy production, and are somewhat remote, that fared best.”

Countries could improve their ranking by increasing their food and energy production and resolving any political instability.

The researchers did note that their methodology probably isn’t perfect and that further research could refine it.

They think the potential consequences of climate change on different nations also need to be considered.

But if a viral, bacterial or fungal apocalypse was to break out right now, the places listed are probably your best bet at safety.

The findings have been reported in the journal Risk Analysis.


Asteroid to fly closer to Earth than the Moon tomorrow, Nasa warns

In other news, a simulation reveals nuclear war between US and Russia ‘killing 34million immediately’.

This shocking clip reveals what a 500km asteroid hitting Earth would look like.

And here’s all the enormous doomsday asteroids Nasa thinks might crash into Earth.

What would you do in an apocalyptic situation? Let us know in the comments!

O2 to hike mobile bills by 2.7% charging millions of customers up to £32 more a year

Coal to get toppled by solar, wind and other renewables in 2021

Emmerdale fans spot blunder as kidnapped Vanessa ‘hasn’t been to the loo’ in eight...

EMMERDALE fans have noticed Vanessa Woodfield has not been to the toilet in an astonishing eight days. She has been kidnapped by the deranged...

IN one corner you have Essex boy Eddie Hearn, representing the clean cut, advertiser’s dream in Anthony Joshua. And in the other, there’s old-school...

MILLIONS of O2 customers will be hit with 2.7 per cent price hikes from April, the mobile network has confirmed. The increase is in...

THE grandfather who allegedly dropped toddler Chloe Wiegand from a cruise ship window in a tragic death plunge has requested a bench trial. Salvatore...

Pancake Day recipe: How to make the PERFECT pancake

How do I make a pancake?1. Put the plain flour, salt and sugar in a large mixing bowl, make a well in the...

Daily horoscope for Monday February 24 — here’s what the stars...

Arsenal legend Ian Wright calls on Emery to be sacked as...

Emmerdale fans spot blunder as kidnapped Vanessa ‘hasn’t been to the loo’ in eight...