Cindy Crawford dons a chic yellow dress as she enjoys lunch with female pal at Soho House in Malibu
Tyrone Crawford: Cowboys given 'green light' to protest during anthem, want to do something eye-catching
Cindy Crawford and Rande Gerber list their mid-century modern home in Beverly Hills for $16 million

The TV presenter, 37, welcomed her first child with her other half Brian Barry-Murphy at London’s Portland Hospital on August 3, weighing 8lb 2oz via Caesarean.

Finally revealing her newborn’s name, Sarah explained that the name is a reference to the couple’s experience of ‘darker times’ after she suffered a miscarriage last year. 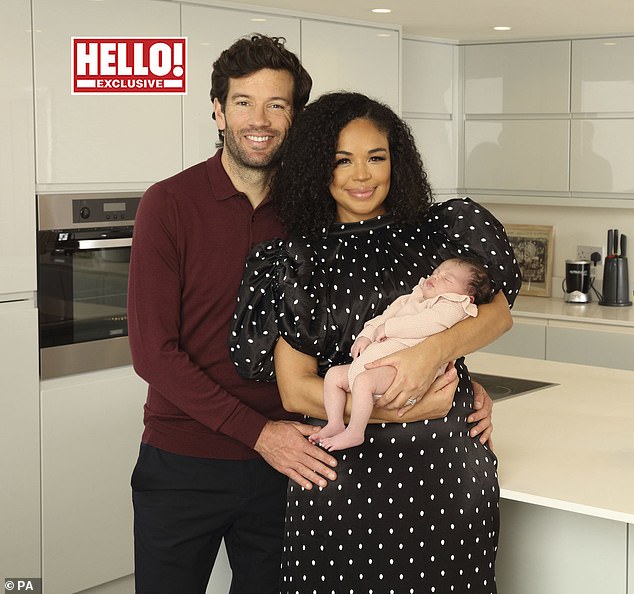 Explaining the heartwarming meaning, the Hits Radio host told Hello!: ‘Summer’s name is a reference to having sunshine after going through darker times.

‘It has been a journey of finally reaching this optimistic season of everything coming into bloom.

‘I cried tears of joy. It felt like we bonded with her straight away.’

Sarah, who is taking August off work following the birth, also explained that her little girl was born to the sound of Stevie Wonder’s song Isn’t She Lovely. 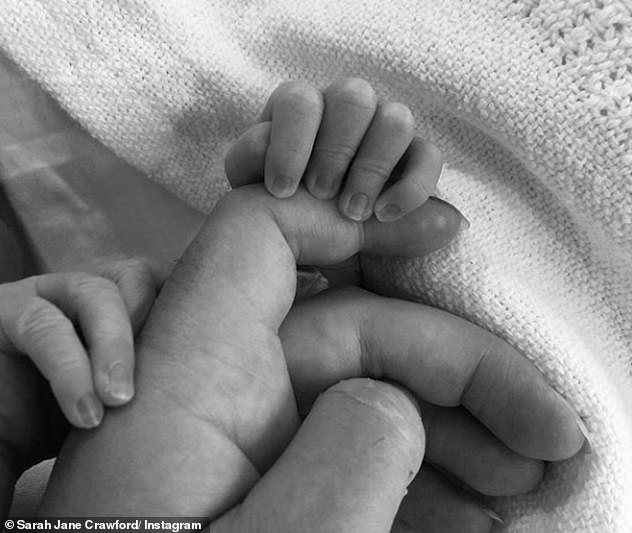 Happy news! She welcomed her first child at London’s Portland Hospital on August 3

She added: ‘I made a birth playlist of songs I’ve loved for years, which made me think about what it means to bring a life into the world.

‘Some people do that with birthing pools or hypnobirthing, but music was my personal stamp on things.’

Earlier this month, the TV star took to Instagram to announce she and her football manager partner, 42, had become parents a year after suffering a devastating miscarriage.

Sarah shared an adorable black and white first snap as her tiny newborn held onto one of her fingers, telling her followers ‘now I know paradise’, while describing the birth as ‘miraculous’. 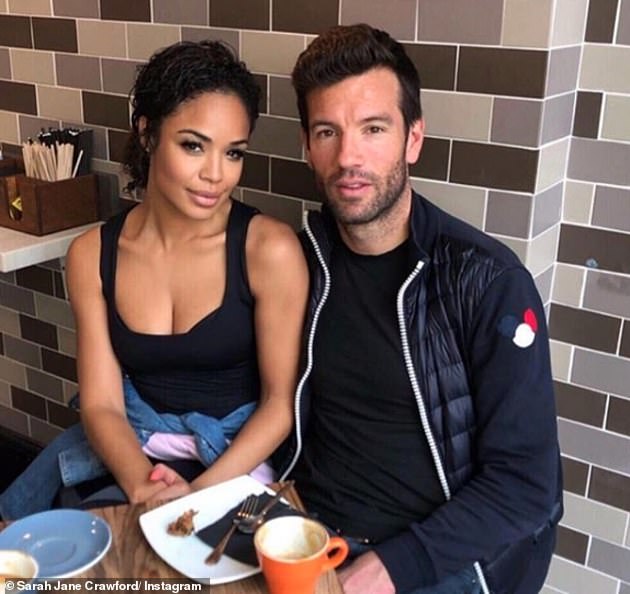 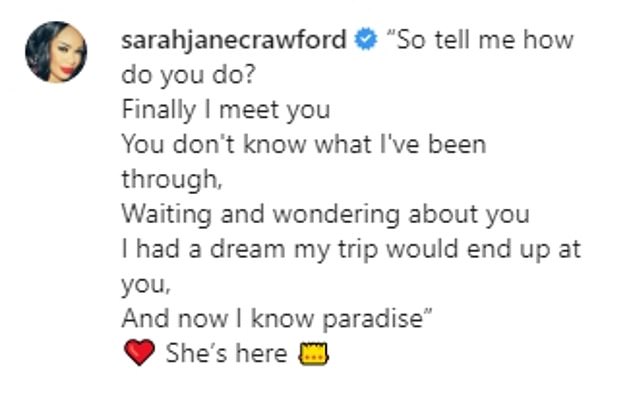 So sweet: Referencing the lyrics to Kings Of Tomorrow track Finally, Sarah told her followers ‘now I know paradise’

Referencing the lyrics to Kings Of Tomorrow track Finally, she captioned the sweet snap: ‘So tell me how do you do? Finally I meet you. 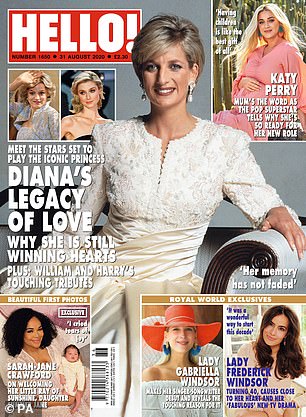 Read the full interview in Hello! magazine, out now

‘You don’t know what I’ve been through, Waiting and wondering about you I had a dream my trip would end up at you, And now I know paradise. She’s here.’

Before falling pregnant with her baby daughter Sarah suffered a miscarriage last year, which she admitted made her little girl’s arrival even more special.

In June, Sarah shared a sweet gender reveal video for her followers and friends, as she revealed they were expecting a little girl.

The media personality took to Instagram to post a clip of herself popping a party cannon which showered her with pink confetti.

Sarah-Jane appeared delighted over the news as she started dancing and giggling over the exciting news.

She penned: ‘Am I having a boy or a girl ??? Garden #genderreveal nearly took my head off with this.’ 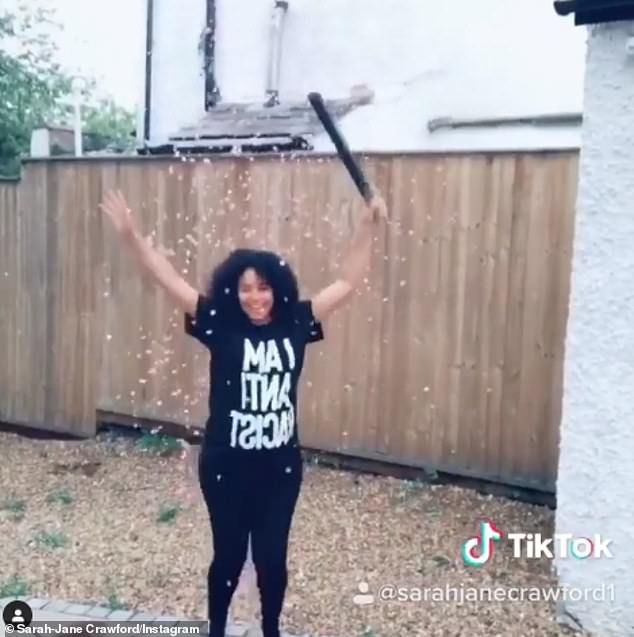 So lovely: At the time, the host of the Sunday Chart Show on Hits Radio took to Instagram to post a clip of herself popping a party cannon which showered her with pink confetti

Exciting: She penned: ‘Am I having a boy or a girl ??? Garden #genderreveal nearly took my head off with this.’

The star revealed earlier this year that she was expecting her first child with football manager Brian, his second.

The host of the Sunday Chart Show on Hits Radio discovered she was pregnant before Christmas, and announced her pregnancy in May.

After a difficult first trimester, Sarah said she was feeling ‘more energised’ as she prepared to enter the final stage.

Read the full interview in this week’s Hello! Magazine out now. 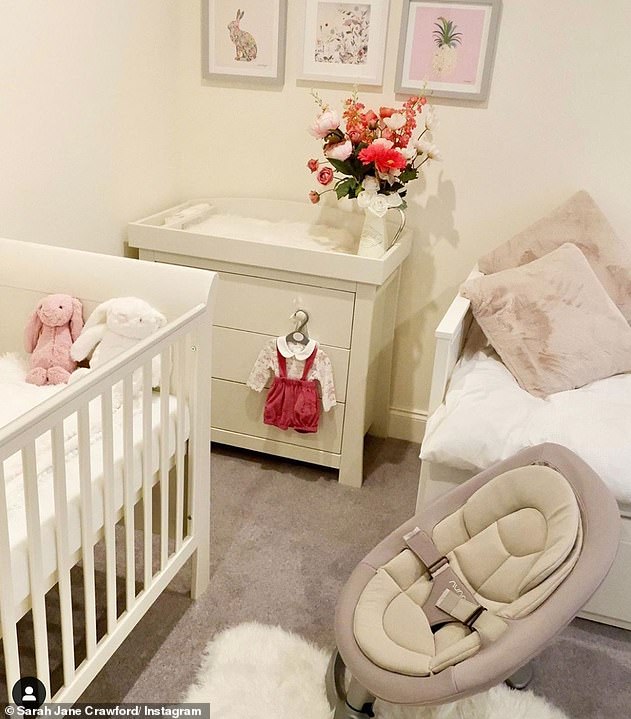 Cute: In the lead up to her daughter’s birth, Sarah also revealed what her baby’s nursery looked like, which boasted neutral tones with touches of dusty pink

Real Housewives of New York: Dorinda Medley opens up about her anger issues 0

Michigan to give clerks more time to handle absentee ballots 0

The Masked Singer: fans take aim at the Cactus as they pan her performance 0

MSNBC hosts gush over Michelle Obama's DNC speech: 'None of us breathed for 18 minutes' 0

Sunburn treatment: How long does sunburn take to heal? 0