Ruth Langsford was terrified when she went to the loo on This Morning only to be confronted by a life-size cutout of Piers Morgan.

The presenter, 60, was pranked by a member of the crew during Friday’s episode.

When she returned, husband and co-presenter Eamonn Holmes joked: ‘She squealed out loud in a dark corridor there.’ 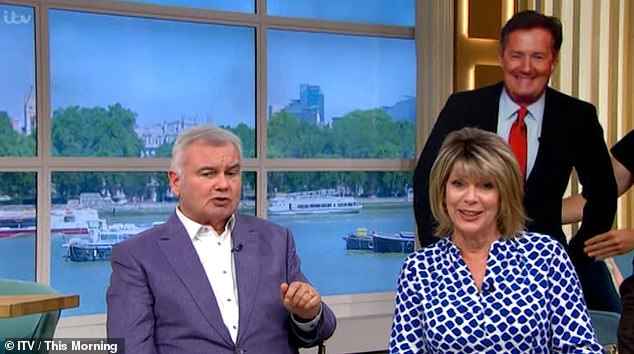 Having a laugh: A member of the crew on This Morning pranked Ruth Langsford by hiding a life-size cutout of Piers Morgan outside the toilets

Ruth replied: ‘Somebody, and he knows who he is – Elliot, has propped up a life-size cardboard cutout of Piers Morgan in the dark. It’s never been there before.

‘I whizzed to the loo and came back through that dark corridor at the back of the studio and there was this face looming.’

She then turned to Eamonn and said: ‘I thought it was you because it’s the kind of thing you do to me.’ 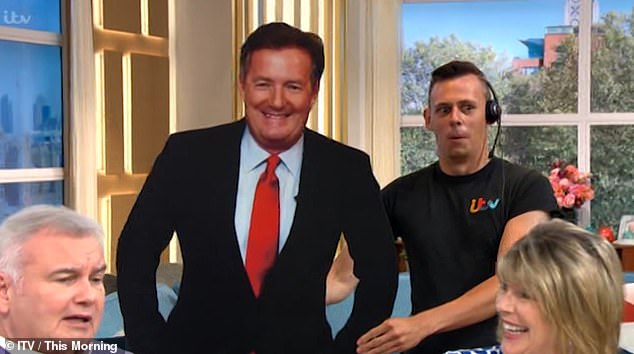 Terrifying: The TV presenter screamed in terror when confronted by the large cutout during a break 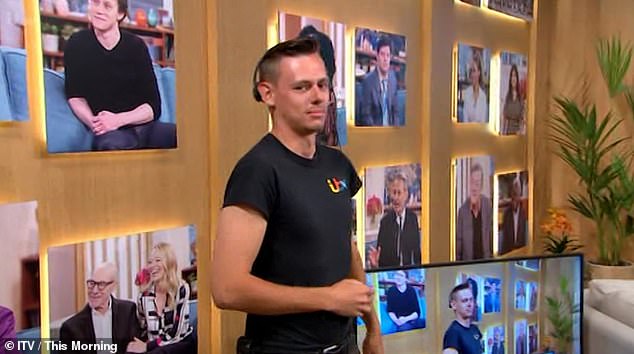 He replied: ‘You think I look like Piers Morgan? He should be so lucky. You calm down now.’

The cutout was later brought on to the set, prompting Eamonn to comment: ‘I’m just still upset for my poor wife on her wedding anniversary.

‘This is what she bumped into in a dark corridor. Now that would frighten children.’

He then ordered for it to be returned to Good Morning Britain, saying: ‘He’s on TV quite enough I would think.’ 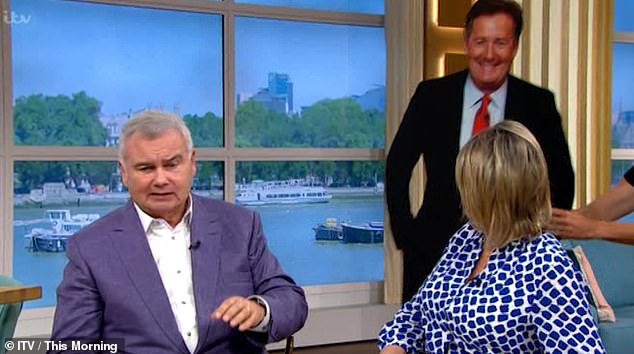 Mistaken identity: Ruth said she initially thought it was husband Eamonn hiding because it’s the kind of thing he does 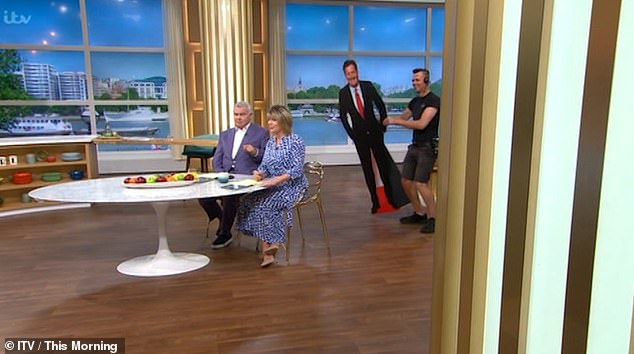 Surprise: Eamonn joked that Piers should be so lucky to look like him during the segment on This Morning

The presenting couple, who have been together for 24 years, shared the secrets behind their special day.

They revealed their first dance was to Crazy Love by Michael Buble and it took place on the hottest day of the year. 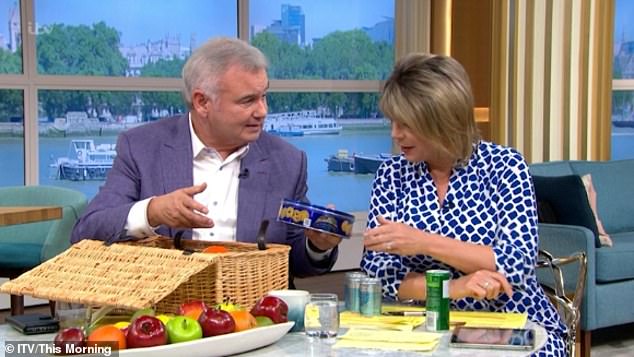 Eamonn, 60, said: ‘Darling, happy anniversary. On this day 10 years ago we tied the knot it was the hottest day of the year and Ruth couldn’t believe her luck!’

Ruth then joked that even though Eamonn was smiling in the wedding photos, he was baking in his suit.

Eamonn then presented a hamper of tinned gifts to his wife for their special anniversary. 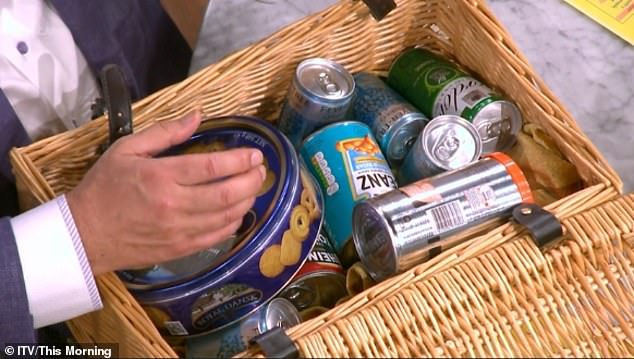 Good haul: In the hamper of gifts offered by Eamonn were a tin of biscuits, canned gin and tonics and baked beans

Tin is the traditional present to mark a decade together and Eamonn bought Ruth a tin of biscuits, cans of gin and tonic, and tins of baked beans and soup.

Ruth also shared a touching tribute to her husband on Twitter with a series of throwback snaps to their happy day.

She said: ‘Loving & laughing for 24 years…Happy 10th Anniversary my darling.’ 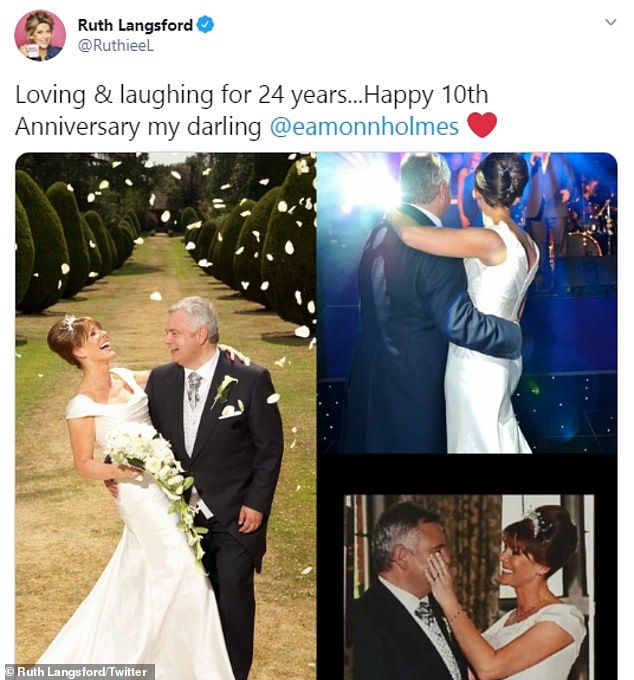 Happy together: Ruth shared adorable throwback snaps of their wedding which was the hottest day of the year 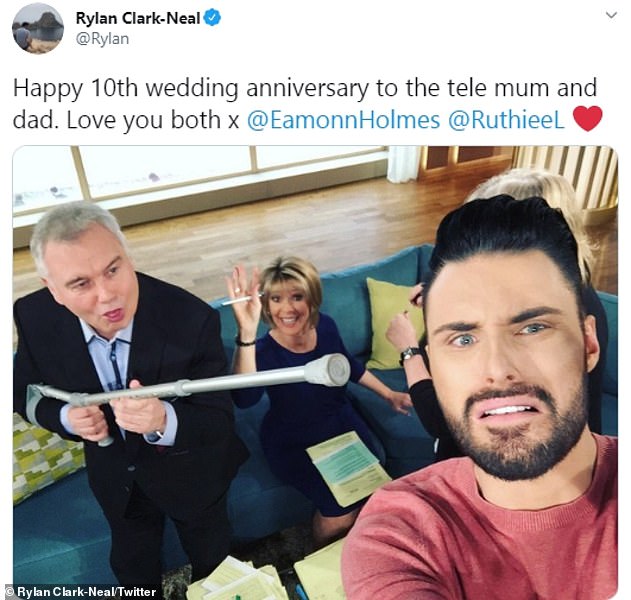 Touching tribute: Rylan Clark-Neal shared a nice message to his ‘tele mum and dad’ with a post on Twitter

The new Apple Watch Series 6 is the best all-around smartwatch, but don't buy it just for the blood oxygen sensor 0