They been leading quite the jet-setting lifestyle as they've spent the last few months between London, Florida and Croatia.And Rod Stewart and his


They been leading quite the jet-setting lifestyle as they’ve spent the last few months between London, Florida and Croatia.

And Rod Stewart and his wife Penny Lancaster kept the good times rolling as they enjoyed some quality time together during their holiday in Venice on Saturday.

The music legend, 75, and the Loose Women panellist, 49, proved safety comes first as they coordinated in equally-vibrant face masks while enjoying a refreshing walk along the capital of northern Italy’s Veneto region. 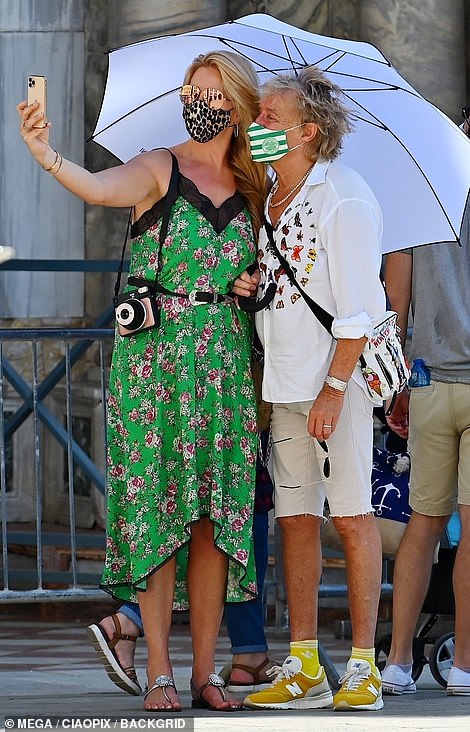 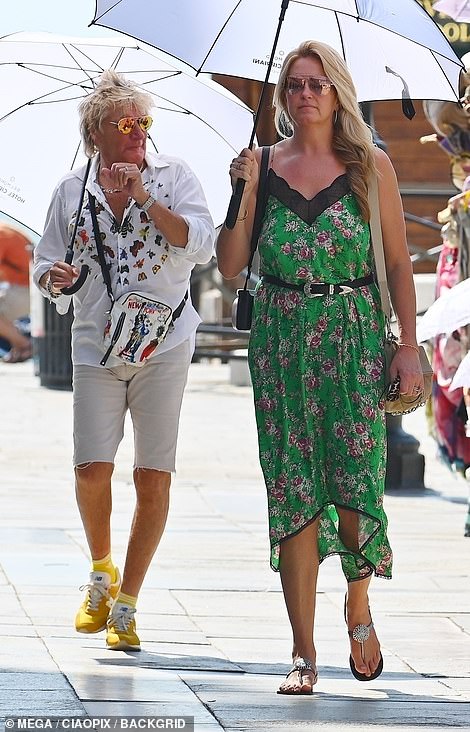 Say cheese! Rod Stewart and his wife Penny Lancaster kept the good times rolling as they enjoyed some quality time together during their holiday in Venice on Saturday

The loved-up pair, who have been married since 2007, were every inch the eager tourist as they documented their time in the European country on their mobile phones and digital cameras.

Former model Penny looked typically radiant in a green floral print midi dress, which she teamed with a complementary belt to cinch her waist.

Opting for comfort when it came to the footwear department, the presenter wore jewelled sandals, which worked well with her dainty jewellery.

Her stunning appearance was rounded off with mirrored, aviator-style sunglasses, wavy tresses and a leopard print covering. 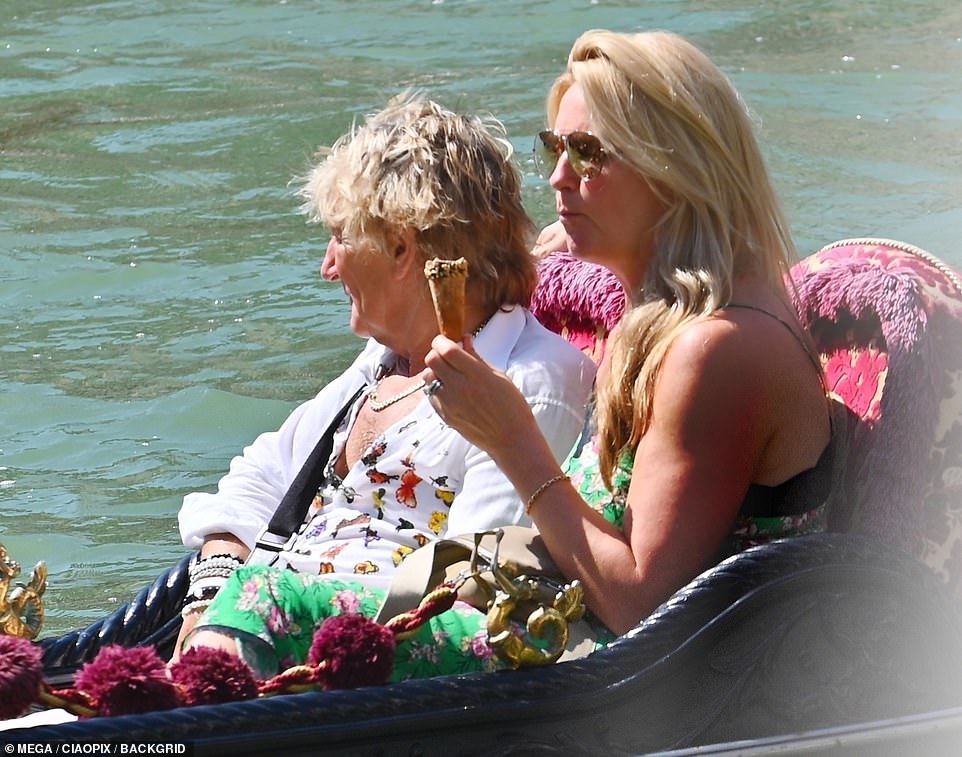 Tasty! The music legend, 75, and the Loose Women panellist, 49, tapped into full relaxation mode as they tucked into ice cream cones while soaking up the sights of Italy on a gondola 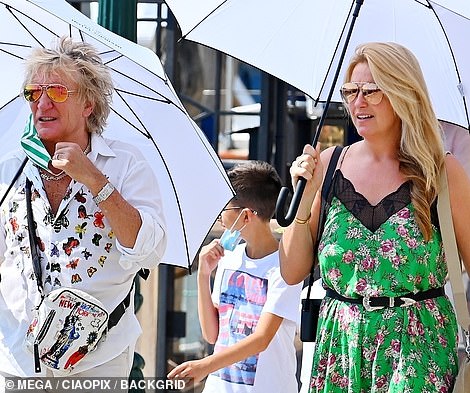 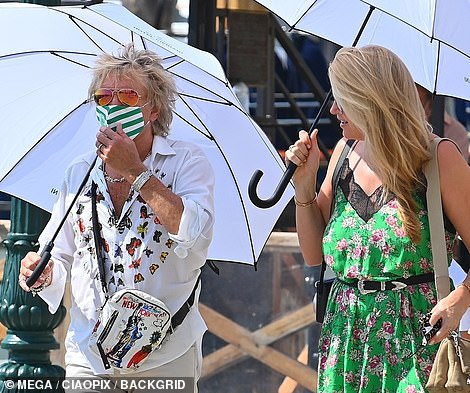 Out and about: At one point, singing sensation Rod was seen temporarily removing his Celtic F.C. face mask as he continued to take in the atmosphere 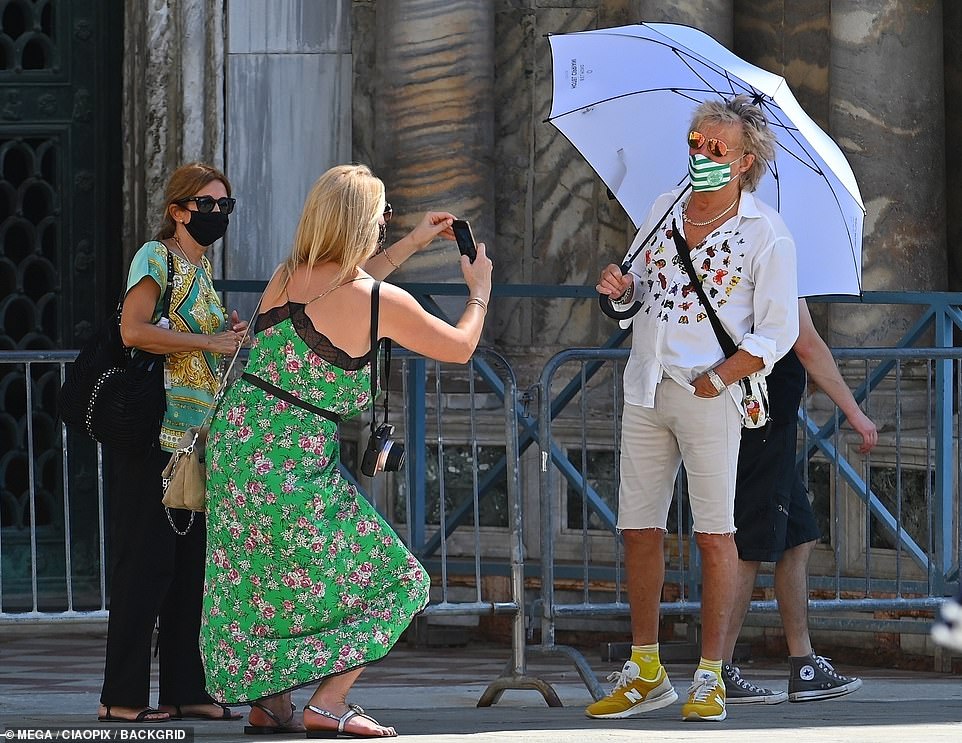 Tender moments: The loved-up pair, who have been married since 2007, were every inch the eager tourist as they documented their time in the European country on their mobile phones and digital cameras

Showing his support for his favourite sports team Celtic F.C., Rod protected himself in a varsity face mask with the group’s signature green and white colour pattern, and shielded his eyes from the sun in orange-tinted shades.

Appearing in great spirits, the couple tapped into full relaxation mode as they tucked into ice cream cones while soaking up the sights of Italy on a gondola.

Penny recently spoke about her experience of the menopause, revealing she first experienced symptoms during lockdown.

The TV star admitted she has found the past few months extra tough because of her symptoms, but gushed that her rocker husband and their two sons Alastair, 14, and Aiden, nine, have been very understanding.

Speaking from her home, she told her Loose Women co-stars: ‘Rod and I have a very close and intimate, open relationship about all sorts of things.

‘I talk to him about how I’m feeling in the lead up to my period, feeling a little down or sad or… I always say, “Darling give me space today, it’s the time of the month.” I’ve explained to them [my family] about the hormones I’m experiencing since March, my last period.

‘I’ve been having the really hot sweats, and then freezing cold… my body temperature is fluctuating all over the place. It affects your mood swings, I’ve been putting on more weight.’

The blonde then recalled a particularly tough day, explaining: ‘I was in the kitchen, cooking dinner, it had been one of those days where everything had been going wrong and I’d had enough. I ended up throwing the dinner across the kitchen.’

‘I just screamed and burst into tears. The boys came and hugged me. Rod said, “Just give mummy a minute”. So, we’re lucky that we’ve got that open discussion.’

Speaking of feeling there’s a lack of information available, she said: ‘What’s really confusing for me, I’m trying to explain to my husband and the boys what’s going on, but I don’t really know myself…’

‘I don’t know what’s happening. My younger friends are saying to me, ‘Are you going to do HRT, what symptoms have you got?’ I’m saying, ‘I don’t know!’

Penny, Rod and their sons have split lockdown between their homes in Florida and London, as well as enjoying a recent break in Croatia.

Rock star Rod has eight children in total, with the singing sensation sharing Sean, 39, and Kimberely, 40, with his first wife Alana Stewart, Ruby, 32, with model ex Kelly Emberg, Renee, 26, and son Liam, 24, from his second marriage with Rachel Hunter, while his first child – Sarah Streeter, 55, from his romance with then-art student Susannah Boffey – was given up for adoption after he fathered her at age 18.

NASCAR's Bristol playoff race is sold out, may have largest US sports crowd since pandemic began 0