Lili Reinhart opened up about the difficulty she had revealing her body in intimate scenes for her CW series Riverdale in a Los Angeles Times interview published Monday.

The 23-year-old actress said she felt ‘insecure’ filming scenes in just a bra and panties because she didn’t think she had the typical ‘CW girl body.’

But despite having trouble accepting her own body, she still filmed the scenes in hopes they would inspire her fans and viewers. 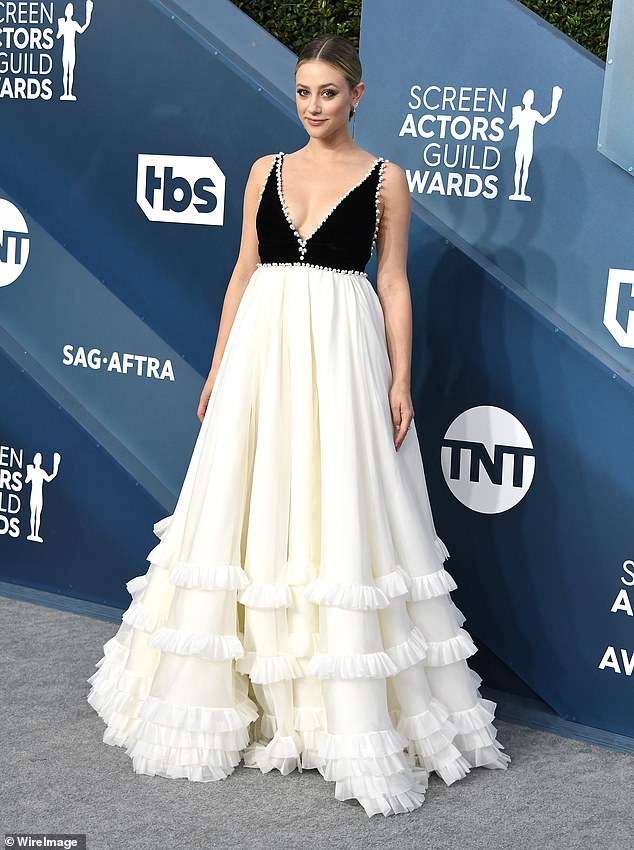 Body issues: Lili Reinhart, 23, admitted that she felt insecure about her body while filming scantily clad scenes on her popular CW series Riverdale; pictured in January

Lili said she had seen some of her costars going up to 12 hours without eating before filming scenes in their underwear, but she wanted fans of the series to see a more ‘average’ body, at least by her definition.

‘I had to do a bra and underwear scene in this last season and I felt really insecure about it. I really, really didn’t want to do it,’ she continued

‘I didn’t tell anyone this. I wasn’t pressured into doing it. I did it because it was my job. But I felt bad about myself doing it. I really did. 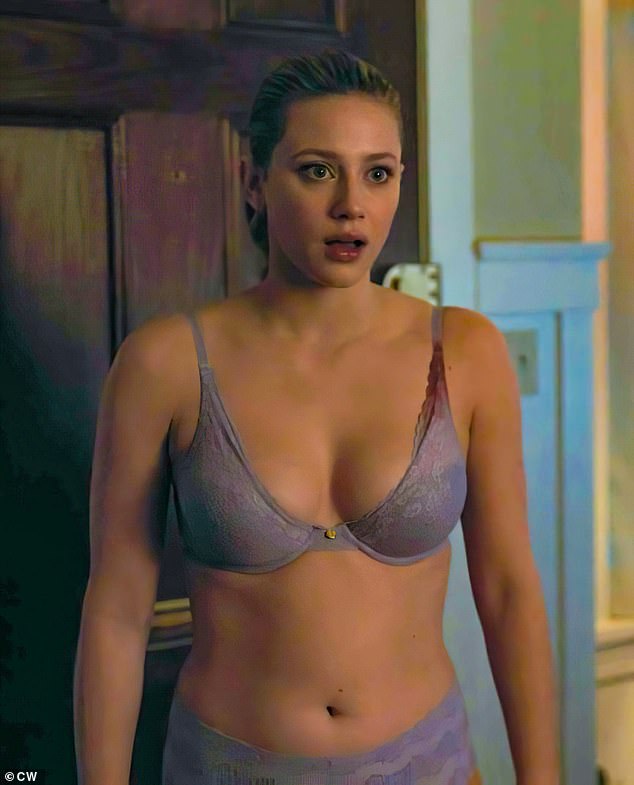 Different shape: ‘I don’t have the CW girl body — tiny waist, nice-shaped legs, skinny, small, tiny,’ she said, adding that she felt insecure about appearing in a bra and panties; still from Riverdale 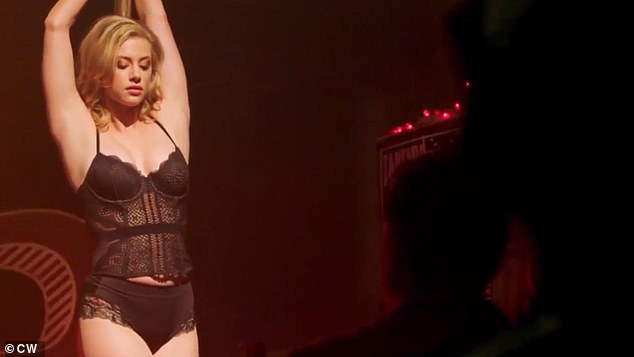 ‘I felt it was important for me to do the scene anyway in my bra and underwear so people could see my body as it was,’ she said; still from Riverdale

‘And this is where it gets complicated. I can’t preach body positivity if I don’t practice it,’ she continued.

‘So even if I’m not feeling amazing about my body, I felt it was important for me to do the scene anyway in my bra and underwear so people could see my body as it was. I did it for the people who feel like they need to look a certain way,’ she said.

Lili grew angry during the interview when the subject of trolls who ‘hide behind a fake Twitter account and call [her] fat’ came up, and she said she doesn’t take anyone seriously who comments on someone else’s body. 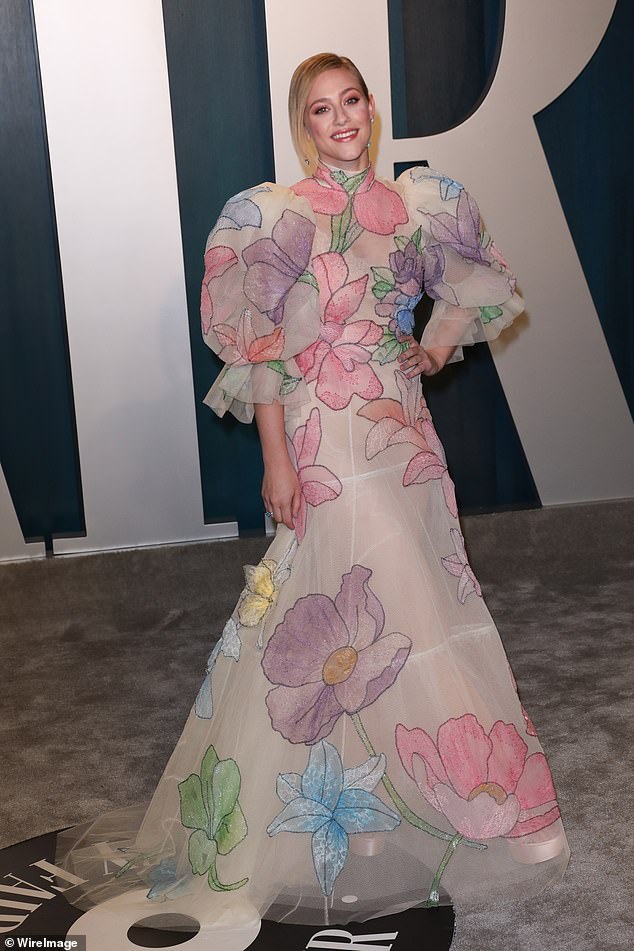 The Hustlers star said she first wondered if she might be bisexual at a bus stop in fifth grade. ‘As I’ve gotten older, the answer has become “Yes. Clearly, I do [like girl]”‘; shown in February

The Hustlers star also delved into her sexuality, after coming out as bisexual in June.

She recounted how she first questioned if she might not be straight while waiting at a bus stop in fifth grade.

‘I thought: “Do I like girls? I don’t know,”‘ she said.’As I’ve gotten older, the answer has become “Yes. Clearly, I do.” … I think I just felt at this point in time: Why not? If suddenly I started dating a girl publicly, I didn’t want people to be, like, what the …?

‘Not that I would even owe anyone an explanation. Because I don’t,’ she added. 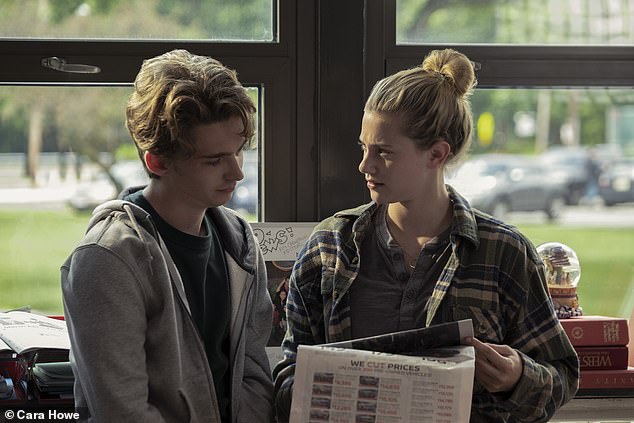 New role: Lili stars in the Amazon original Chemical Hearts as a high schooler who becomes depressed while starting a new relationship after her previous boyfriend was killed in a car accident

Lili is starring in the Amazon original film Chemical Hearts, in which she plays a high schooler dealing with the aftermath of surviving a car crash that killed her boyfriend.

But as she begins to fall in love with a new boy (Austin Abrams), she’s engulfed by waves of sadness and depression that threaten to derail their burgeoning relationship.

The actress has previously spoken about her history with depression, which aided her in the role.

‘I’ve lived with depression for a long time now, so playing a girl who is clearly feeling somber and going through heartache and grief wasn’t so foreign to me. It wasn’t that hard for me to access,’ she said.

In March, Lili split up with her boyfriend and co-star Cole Sprouse, who plays Jughead on Riverdale.

She brought up her depression on Twitter after the split to correct a report about her mental state after the break-up to clarify that she felt ‘like she was going to die’ because of her depression and not the separation. 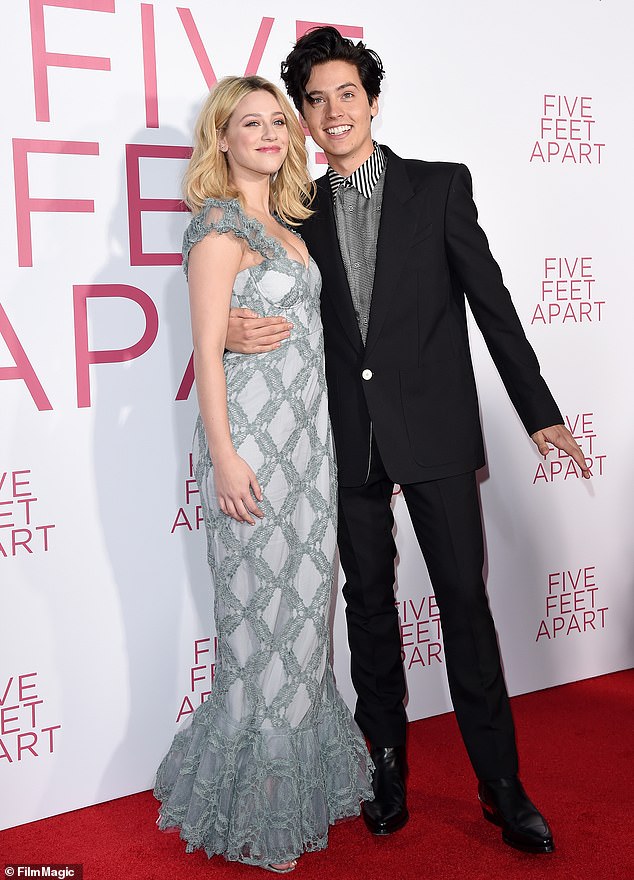 Rough time: In March, she split from her Riverdale costar Cole Sprouse. Lili called out reports of her sadness and said it was because of her depression, not the breakup; shown in March 2019

It's a girl! Married At First Sight father announces birth of baby daughter and her sweet name 0