Bryant, 41, and 13-year-old daughter Gigi were just two of the nine people killed in a helicopter crash in California on Sunday.

Ever since the horror news, tributes have been pouring in from the world of sport and beyond.

And Real Madrid are just the latest team to pay tribute, as they observed a minute’s silence at training on Monday morning.

Los Blancos stars huddled in a circle, bowed their heads and paid their respects to a fallen legend.

After the news of Bryant‘s death broke on Sunday night, fans, former team-mates and fellow sporting stars have paid tribute to “the Black Mamba”.

The NBA were the first to do so, having been forced to play through the emotional pain just hours after his death.

LeBron James found out about Bryant’s passing after landing at Los Angeles airport and was seen in tears on the runway.

Basketball stars across the USA scribbled tributes to Kobe on their sneakers for Sunday night’s action.

Golf legend Tiger Woods revealed he was “incredibly sad” at the news, while Nick Kyrgios warmed up for his Australian Open clash with Rafa Nadal in a Bryant jersey.


Salah's cars include a £160k Bentley, Mercedes-Benz, Lamborghini.. and a Toyota

Mourners flocked to the Staples Center – Bryant’s home for two decades – on Sunday evening to lay flowers and letters.

The arena was hosting the Grammys, with Alicia Keys leading the tributes from inside with her own song for the legend.

Elsewhere, the ferris wheel on Santa Monica Pier, California turned purple and gold for the night – with Bryant’s No24 lit up in the heart of it. 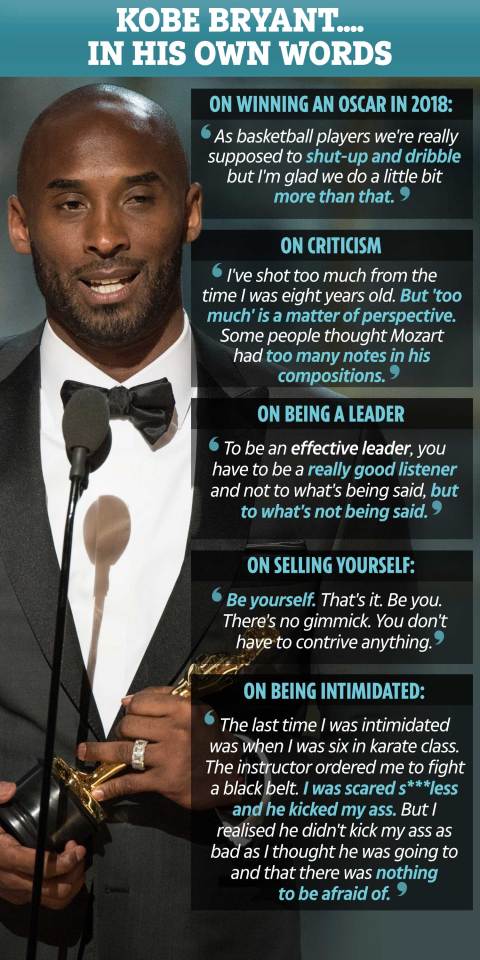 ANT and Dec’s Saturday Night Takeaway fans were in tears tonight after the lads built a HOUSE for a family who lost their...

TYSON FURY vs Deontay Wilder in a massive heavyweight rematch is on! And we’ll be bringing you all of the build-up from Las Vegas...

IN-FORM Cristiano Ronaldo marked the 1,000th senior match of his career with a goal… and a Serie A record to boot. The 35-year-old’s strike...

My ex cares for my daughter but she may be my pal’s after sex...

DEAR DEIDRE: I HAD wonderful, loving sex with my best friend and now I’m not sure whether my daughter is his or my ex-partner’s. My...

DEAR DEIDRE: OUR home is like World War Three because my son and husband get on so badly. I’m 41 and I got together with...