'It has bothered me': Pregnant Ashley James cradles her blossoming stomach as she discusses being bump-shamed in candid postBy Lisa Mc


‘It has bothered me’: Pregnant Ashley James cradles her blossoming stomach as she discusses being bump-shamed in candid post

By Lisa Mcloughlin For Mailonline

She has been documenting the ups and downs of her first pregnancy with on Instagram.

And Ashley James shared the realities of bump-shaming as she posted a radiant photo of her cradling her growing stomach in her underwear.

The 33-year-old star – who is half way through her pregnancy – is having a baby boy with her boyfriend of nine-months Tom Andrews and admitted that she’s been left worried about ‘people commenting on the size of her bump’. 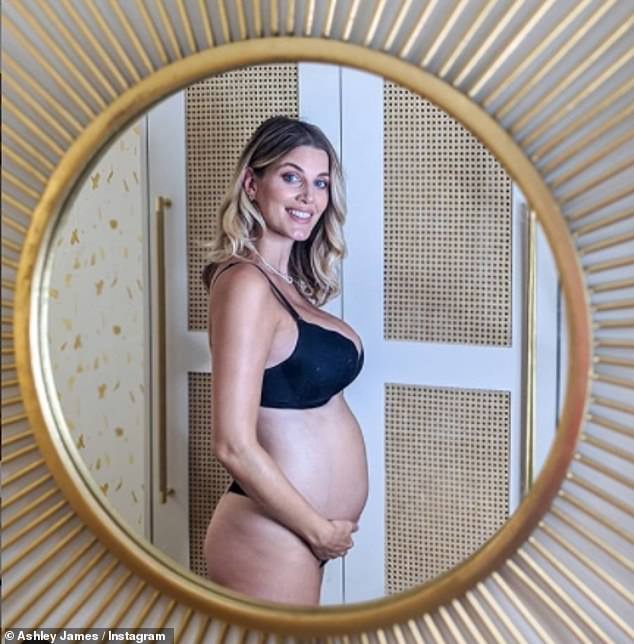 Radiant: Ashley James shared the realities of bump-shaming as she posted a radiant photo of her cradling her growing stomach in her underwear

The Made in Chelsea star reflected: ‘I’ve been pretty chilled throughout my pregnancy, but one thing that has bothered me and caused me to worry is people commenting on the size of my bump.

‘My bump looks completely different depending on the time of day, or the position my body is in, and people have commented on how small my bump is pretty much from the moment I announced I was pregnant.

‘I started comparing my bump to others and worrying my baby wasn’t growing properly, so much so I asked my midwife to check everything was ok.’

Ashley went on to explain that she has found support during the shaming by using social network Peanut to connect with other women across fertility and motherhood. 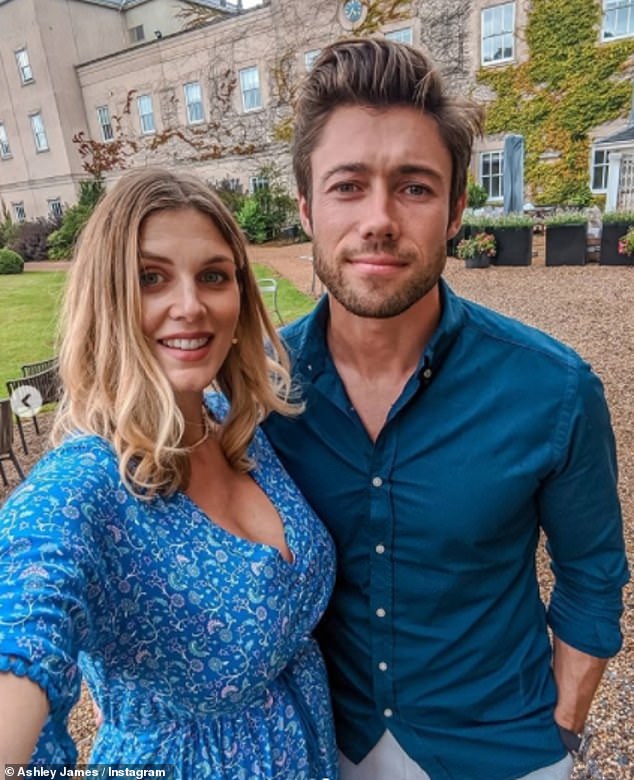 Baby on board: The 33-year-old star is having a baby boy with her boyfriend of nine-months Tom Andrews 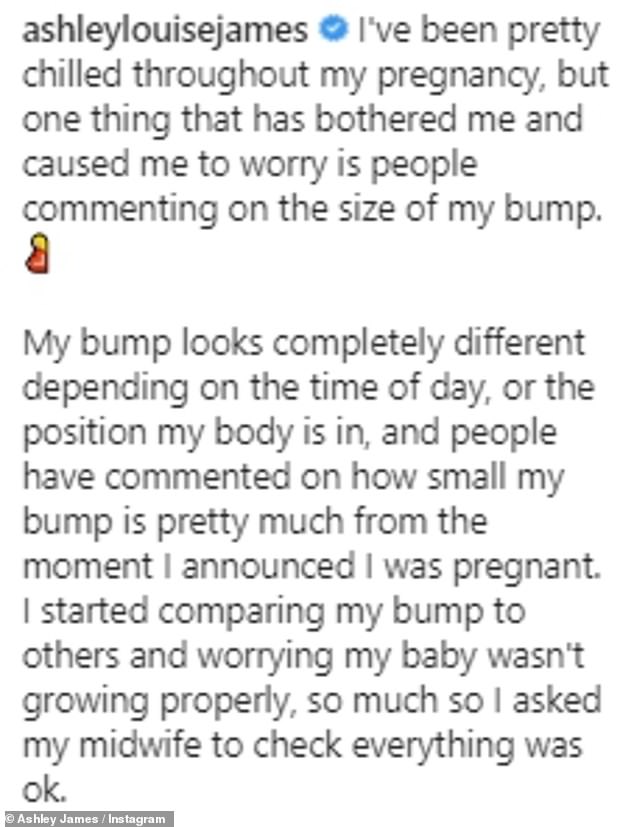 Worry: the TV star admitted that she’s been left worried about ‘people commenting on the size of her bump’

Her candid post comes as she shared an adorable selfie with her other half Tom as they enjoyed a Sunday at Down Hall Hotel & Spa on the Hertfordshire and Essex border.

Elsewhere, Ashley gave her fans an update on her pregnancy journey on Sunday, when she opened up about the realities of stretch marks and how women should not be ashamed of their changing bodies.

Taking to Instagram, the TV star shared a snap of herself lying in underwear as she caressed her bump.

Cradling her baby bump as she said: ‘What if we stopped seeing stretch marks as bad, and started seeing them as a gift from mother nature, like a tattoo or intricate stitching to document the tapestry of our lives? 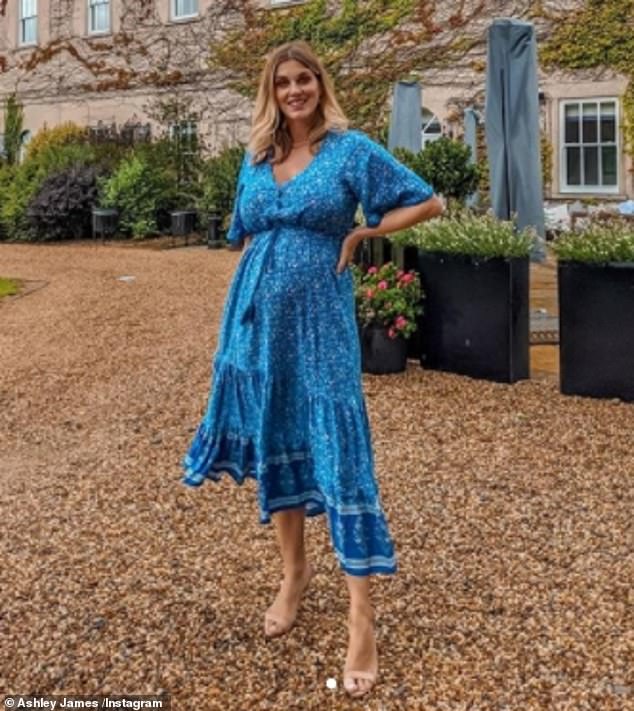 Glowing: She donned a blue midi dress for her outing on Sunday 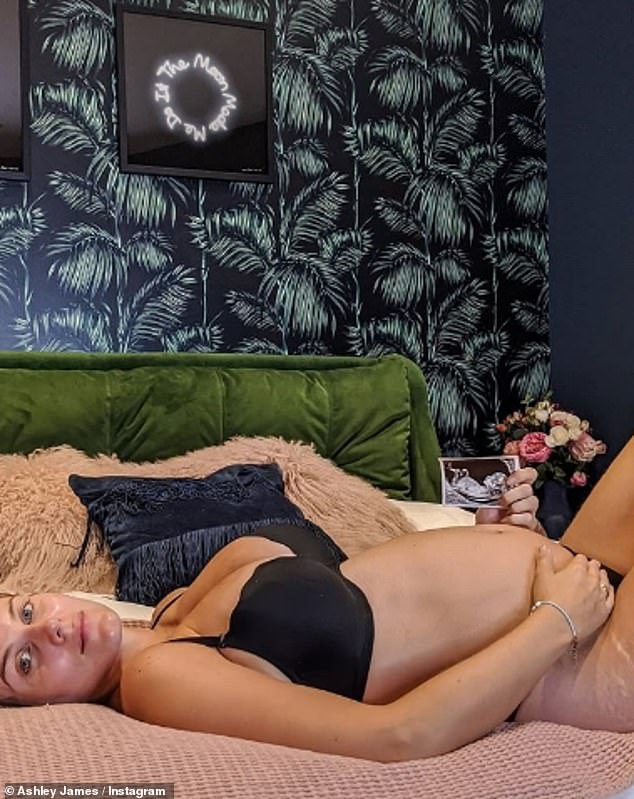 Candid: Ashley recently discussed stretch marks and how women should not be ashamed of their changing bodies

‘I’ve had stretch marks around my boob since I was 15, and around my bum from, well I don’t quite know what age. Now as my baby develops, I’m noticing them appear more across my bum and thighs.

‘It’s interesting that there’s so many pregnancy products aimed at helping you get rid of your stretch marks. Pregnancy books telling you how to do everything to avoid them, inferring that we should dislike these appearing stretches in our skin.’

She continued: ‘I’m not going to sit here and tell you that you should LOVE your stretch marks, but you could learn not to hate them either.

‘We might all have stretch marks in varying amounts, but we nearly all have them, no matter what our body type. But each one tells a story: We might have grown quickly as teens, survived lumps, or be growing new life inside us… They all sound like wonderful stories to me.

‘It’s our marks and scars that tell a story, that add character to our bodies, and that make us perfectly unique.’ 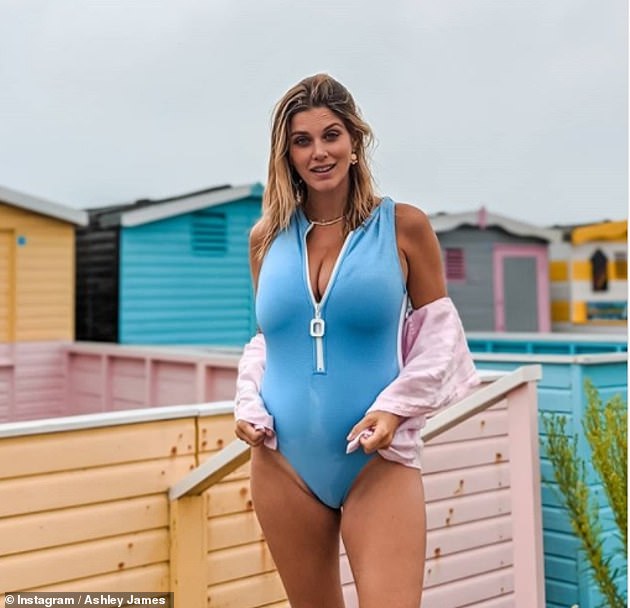 First time mum: Ashley is half way through her pregnancy

Loading...
Newer Post
US Marine lands deal with Patriots after putting football career on hold to serve
Older Post
Banana Apricot Smoothie Can Be A Part Of Your Weight Loss And Immunity-Boosting Diet