By Christine Rendon and George Stark For Dailymail.com

She is back on the market after reportedly splitting from boyfriend and band mate Gabriel Glenn.

But Paris Jackson was throwing herself into work on Wednesday.

The singer, 22, was spotted heading to the music studio in Los Angeles with a friend. 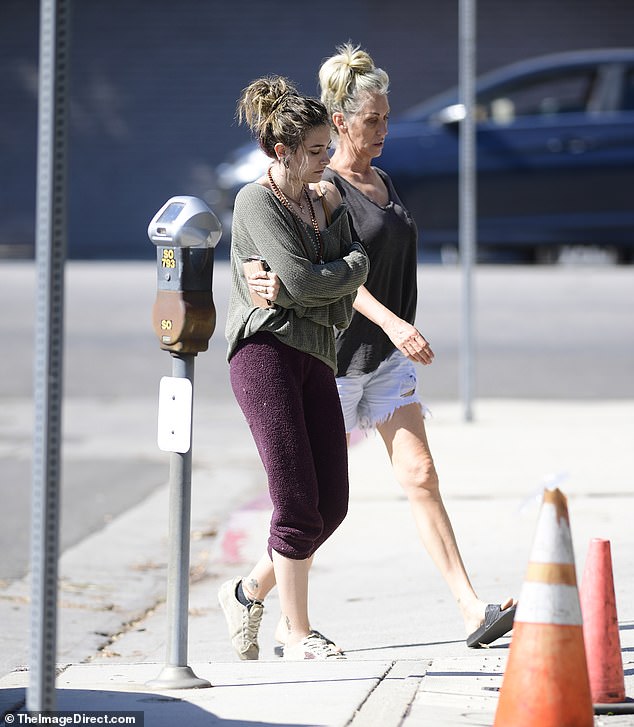 Solo artist: Paris Jackson threw herself into her work as she headed to the studio in Los Angeles on Wednesday

Paris briefly kept her head down as she walked towards the studio with her arms wrapped around herself.

The daughter of the late Michael Jackson wore her usual laid-back attire, with her latest look consisting of an off-the-shoulder top and maroon sweatpants.

She pulled her hair up into a messy bun, and adorned her look with several long, beaded necklaces. 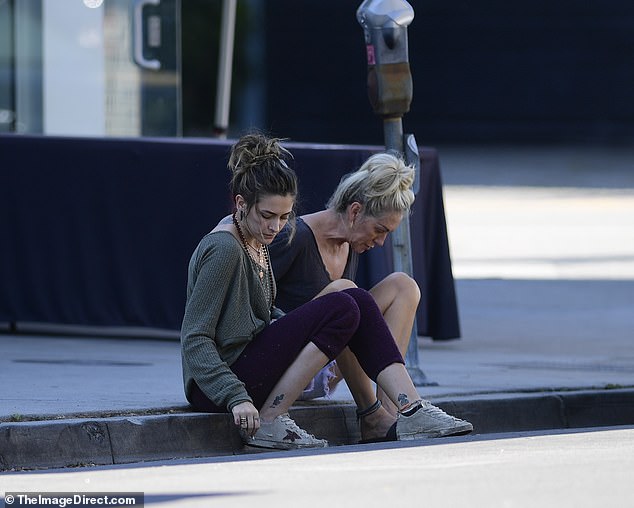 Take five: The daughter of the late Michael Jackson sat on the curb, where she appeared to be taking a smoke break 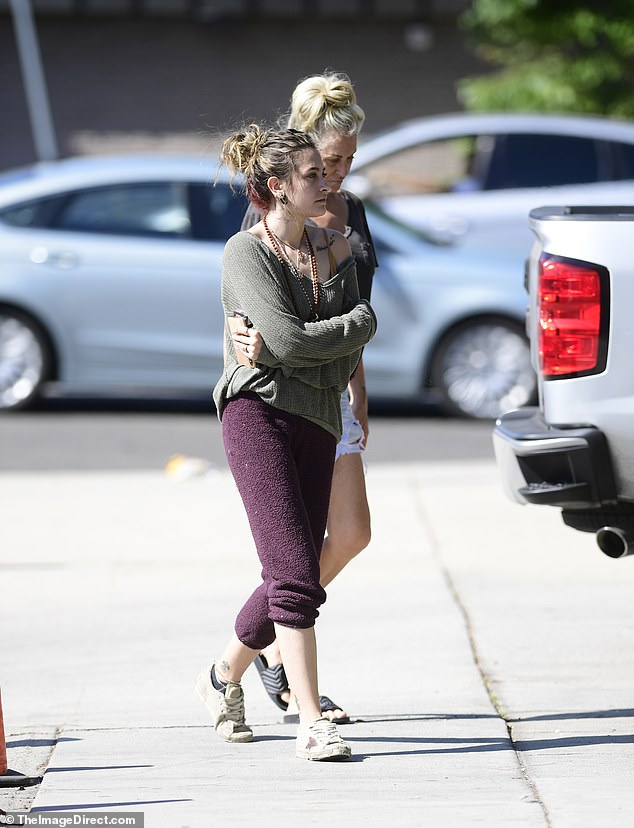 Low-key: She pulled her hair up into a messy bun, and adorned her look with several long, beaded necklaces

Paris entered the studio alongside a friend, and at one point the pair headed back outside for a quick break.

The daughter of the late Michael Jackson sat on the curb, where she appeared to be taking a smoke break.

Paris has not yet addressed her reported split from Gabriel, though on Wednesday she did share a poignant message about the ‘rough’ year the world had been facing.

‘This year has been a rough one for all of us, as a collective consciousness and individually. here’s a friendly reminder that “out of suffering have emerged the strongest souls.” – kahlil gibran. we will heal,’ she wrote, along with a meditative photo. 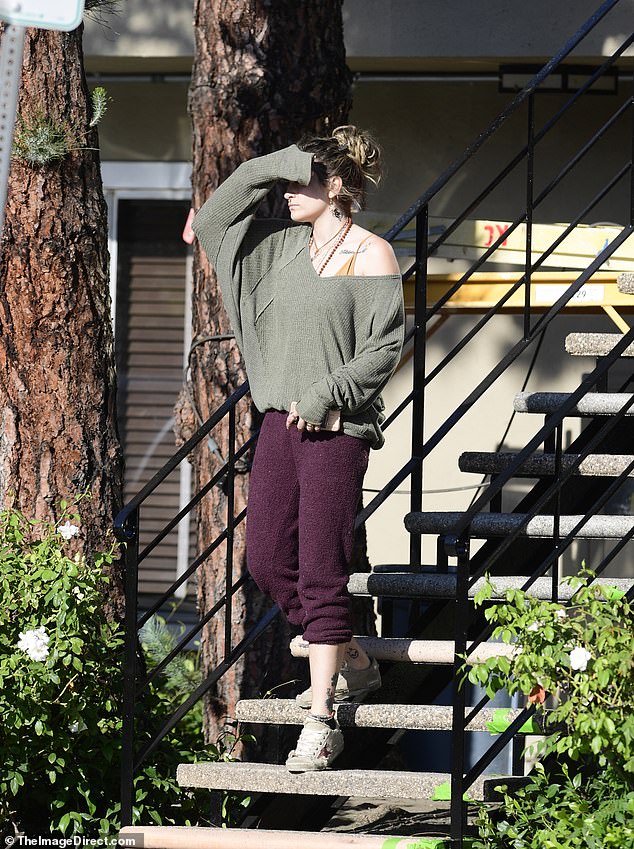 Newly single: News broke about Jackson’s split in a Tuesday report from TMZ

News broke that Paris and Gabriel split after more than two years together in a Tuesday report from TMZ.

The break-up between Paris and the 23-year-old musician is said to have been ‘amicable’.

The pair attracted attention after appearing in her Facebook Watch series ‘Unfiltered: Paris Jackson and Gabriel Glenn’ – which wrapped this week – and revealed that she once lived in a van with her now ex boyfriend Gabriel shortly after meeting him.

It was also revealed in an episode of the series that the pair were ‘constantly butting heads’ but sources tell TMZ the split was amicable and ‘neither holds any anger or ill will.’

Per the report, it was Paris who made the decision to separate, and now wants to concentrate on her music career. 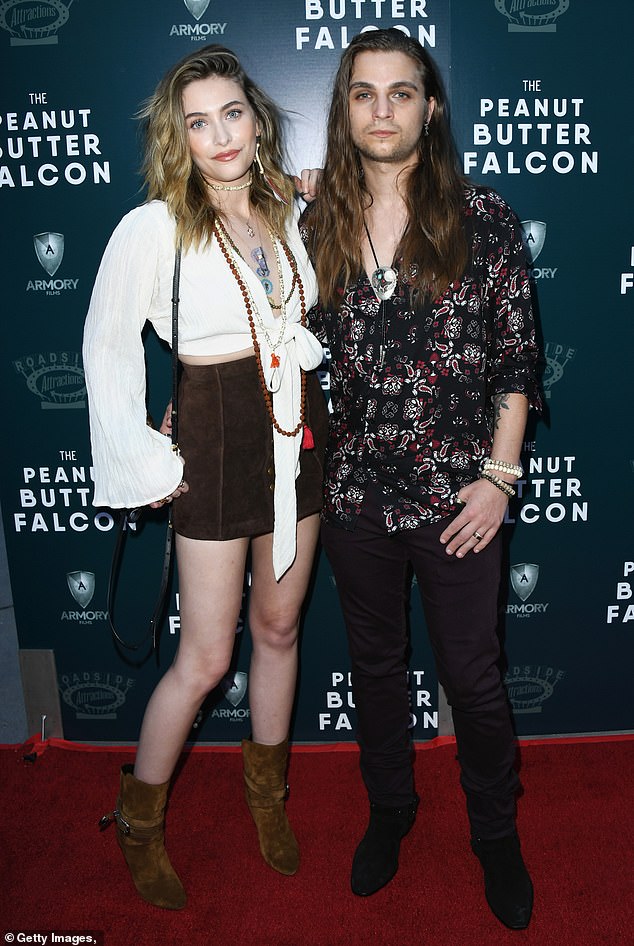 Happier times: The couple were dating for two years before their reported split, which is said to have been ‘amicable’ (pictured 2019)

Loading...
Newer Post
NFL partners with three organizations to get out the vote
Older Post
Keto diet: What is the keto diet? Does keto help you lose weight?

Timm Hanly: It was 'difficult' to keep my relationship with Briana a secret during BIP 0