She recently criticised her influencer pals who said they are 'working abroad' amid the coronavirus crisis, before asking fans to stop trolling the

Nissan designs mobile office van for 'work from home' age
Federer out of Miami Open; will train to 'work his way back'
TOWIE's Chloe Sims wows in white bikini on extended 'work trip' to Mexico


She recently criticised her influencer pals who said they are ‘working abroad’ amid the coronavirus crisis, before asking fans to stop trolling them.

And Olivia Attwood seemed to be moving on from the drama as she flaunted her incredible figure in a lacy black bra on Thursday.

The Love Island star, 29, looked sensational as she showcased her ample assets in the busty lingerie set and worked all her angles for the camera. 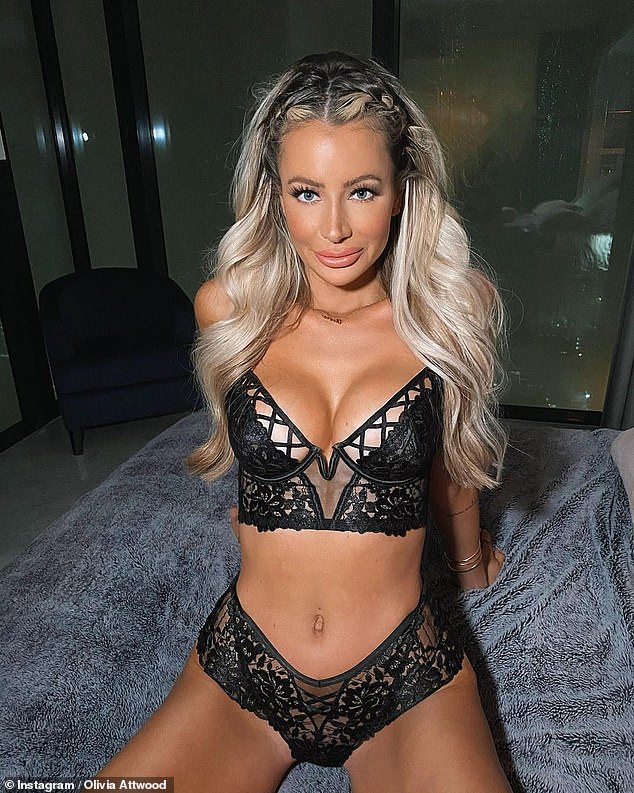 Olivia exuded confidence as she posed on a bed in the sultry two-piece from Ann Summers.

She highlighted her cleavage in a plunging longline bra with an intricate floral lace detailing and a semi-sheer paneling in the middle.

The blonde beauty wore her long locks braided back from her face and let the rest of her long tresses cascade over her shoulders as she smouldered for the camera. 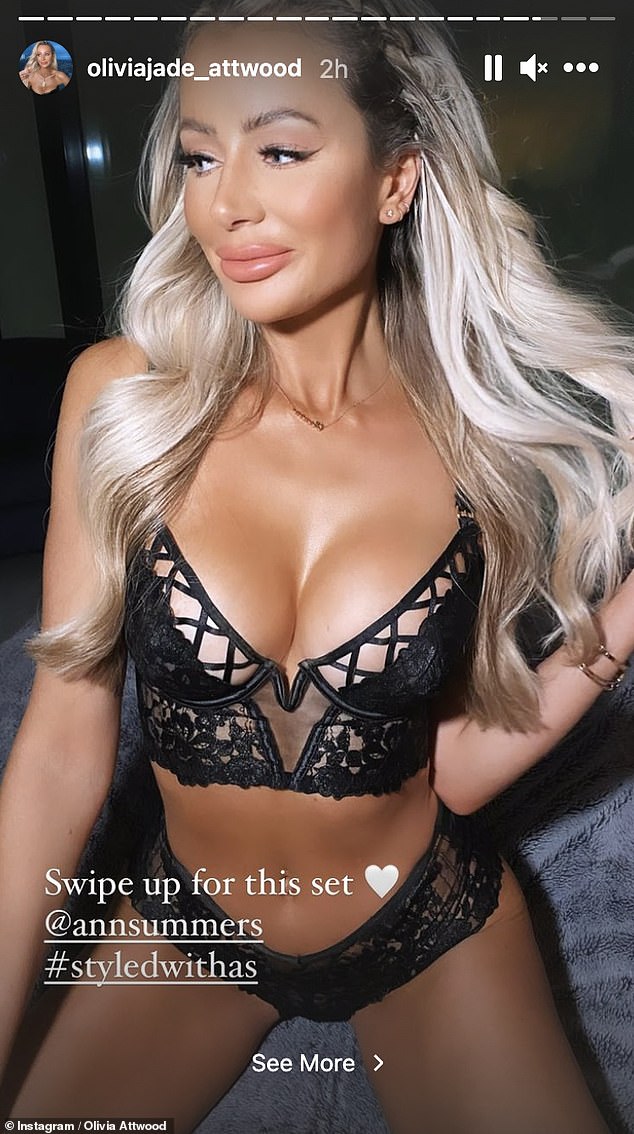 Work it: The Love Island star, 29, exuded confidence as she showcased her toned physique

She also shared several glimpses into her sexy photoshoot to Instagram Stories, including a snap of her flaunting her toned physique in the mirror.

It comes after Olivia told people to stop trolling influencers following her own rant slamming those ‘working’ abroad during the global pandemic.

On Tuesday, the beauty took to her Instagram Stories from her Manchester home to criticise her reality star and influencer pals, who remain in Dubai, for claiming they are ‘working abroad’ amid the coronavirus crisis.

Addressing the furore over her comments on Wednesday, Olivia insisted that she doesn’t want to encourage any ‘hurtful behaviour’ and told any of her angry followers to instead ‘unfollow’ people. 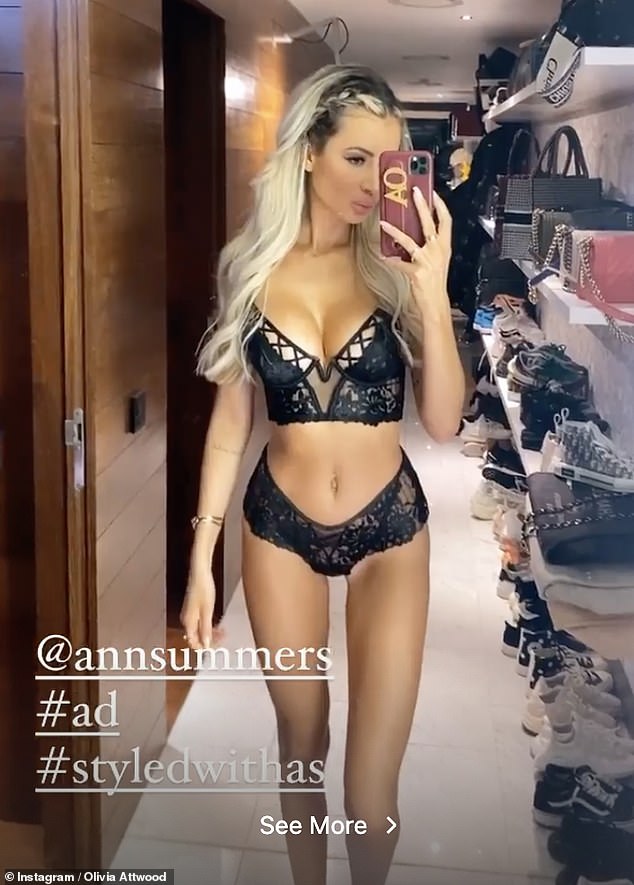 Toned: She accentuated her cleavage in a plunging longline bra with a semi-sheer panel 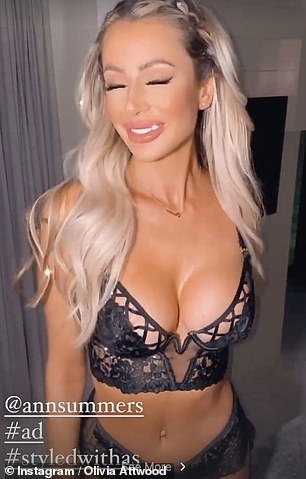 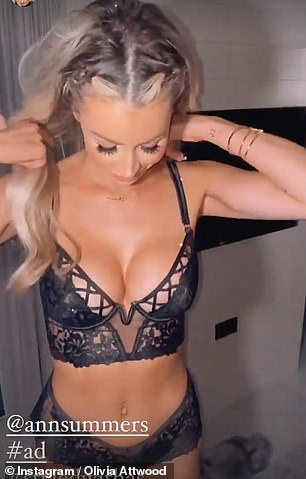 Stunning: Olivia let her long blonde tresses cascade over her shoulder as she worked her angles for the camera

Cheeky! The star referenced her beau Bradley Dack as she captioned her snap, ‘today’s attempt in distracting Bradley from the PlayStation’

Filming a make-up tutorial for her fans, the former TOWIE star said: ‘What I will quickly say is that after yesterday’s rantings, my phone, I mean it literally nearly blew up in my hand.

‘So I think… even though I was rambling, I think what I said is probably what a lot of people are thinking or feeling. Well, that’s what people have said to me anyway. But I’ve said it now.

‘One thing I will say today, I don’t want to encourage any hateful behaviour. Don’t write strangers on the Internet mean messages.

‘So you don’t need to write them a hurtful message, just unfollow, don’t look. Everyone is fighting something we don’t know about.’

Olivia added that she is following her own advice as she is going to unfollow and mute any influencers annoying her. She didn’t name any specific accounts.

Listing a range of activities people could do rather than troll, she continued: ‘Message a friend, talk to your dog, just deep breath.’

On Tuesday, Olivia hit out at her influencer pals for claiming they are ‘working’ in sunnier climes during the global pandemic.

As a long line of her Love Island co-stars and other Instagram influencers remain in Dubai, Olivia took to her Instagram Stories from her Manchester home to criticise them for claiming they are working abroad. 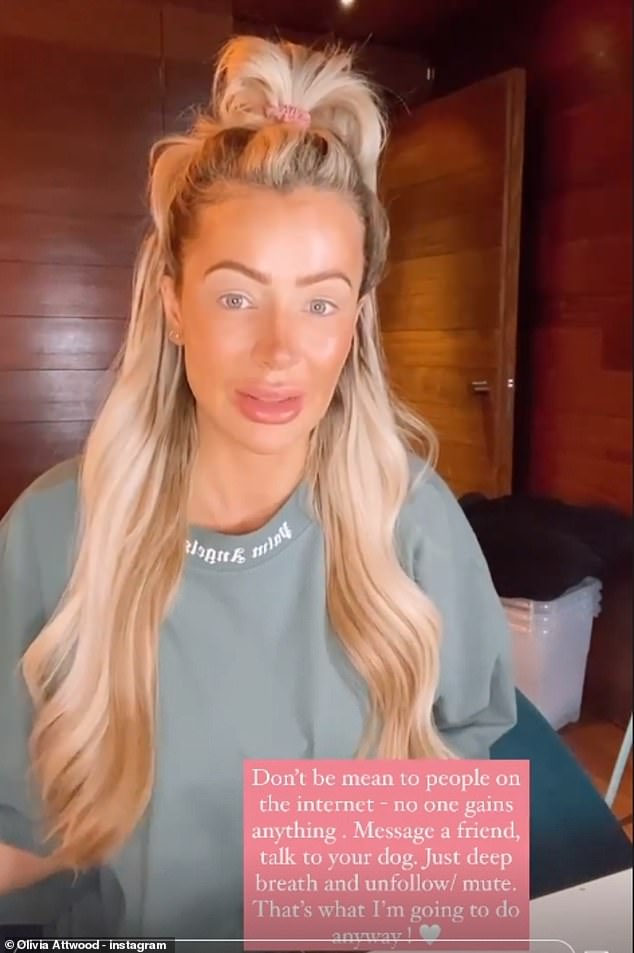 Important: It comes after Olivia told people to stop trolling influencers following her own rant slamming those ‘working’ abroad during the global pandemic 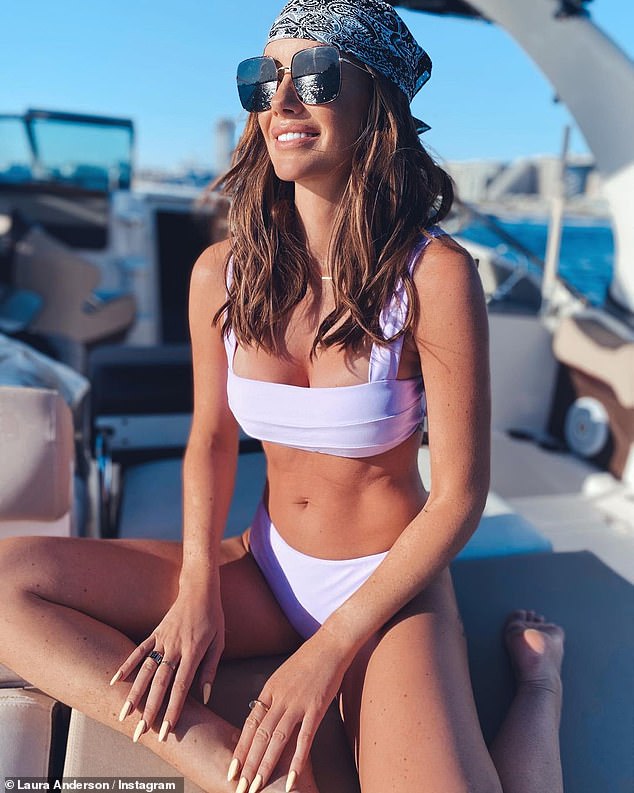 Abroad: As a long line of her Love Island co-stars and other influencers remain in Dubai, Olivia took to her Instagram Stories on Tuesday from her Manchester home to crticise those ‘working abroad’ (pictured fellow Love Islander Laura Anderson who is currently in Dubai)

Olivia’s video comes as it was revealed that travellers returning to the UK from the UAE will have to quarantine following a 52 per cent surge in the number of COVID -19 cases there – an undoubted shock for the influencer-packed city.

Celebrating the first sunny day in her home city in weeks, the Love Island star joked she would have to go on holiday to shoot content for her 1.9m Instagram followers because of the lack of good weather.

‘Being an influencer is actually really hard and I can’t create content for you guys here, so I am going to have to go on holiday but don’t worry I will keep referring to it as “work,”‘ the tongue-in-cheek video began.

Later, Olivia elaborated, telling her followers: ‘Oh my god I sound like an actual hater. Do you know what it is right, it’s just this meme that’s been going around which is making influencers, and it’s not all of them it’s only a few, look so bad. 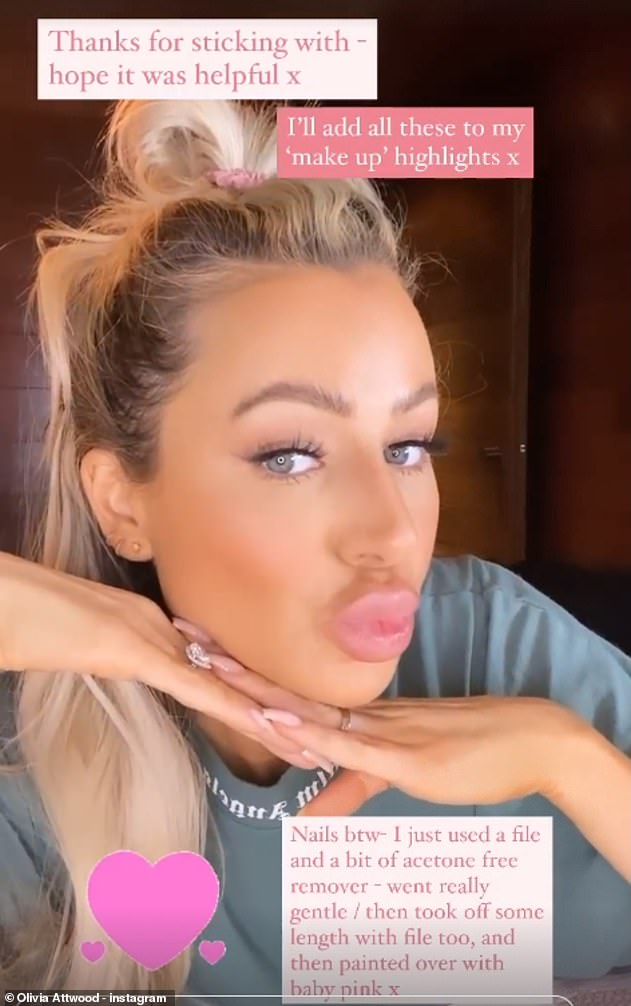 A message! ‘One thing I will say today, I don’t want to encourage any hateful behaviour. Don’t write strangers on the Internet mean messages,’ Olivia insisted

‘It’s the constant “I’m working, not on holiday” shout. There is a difference from being able to earn money wherever you are are to being there for work,’ the star pointed out.

Olivia explained that she has never pretended a holiday with her footballer fiancé Bradley Dack, 27, is a work trip, saying: ‘Whenever I go on holiday I’ll post content which I can monetise.

‘I’m still on holiday. I don’t go “Oh me and Brad have had the most amazing week in Portugal but don’t worry I was flat out working”. You just sound so stupid.’

Olivia did admit she would be tempted to escape the gloomy UK weather and the ongoing lockdowns at some point though, explaining: ‘And on top of that you’ve got the ones going “Oh we’re all in this together, this is our struggle”.

‘No it’s not. You’re on holiday and to be fair I don’t f**king blame you. If this goes on for another six months I’m not going to say that I wouldn’t potentially be tempted to take a trip, because I probably f**king would.’ 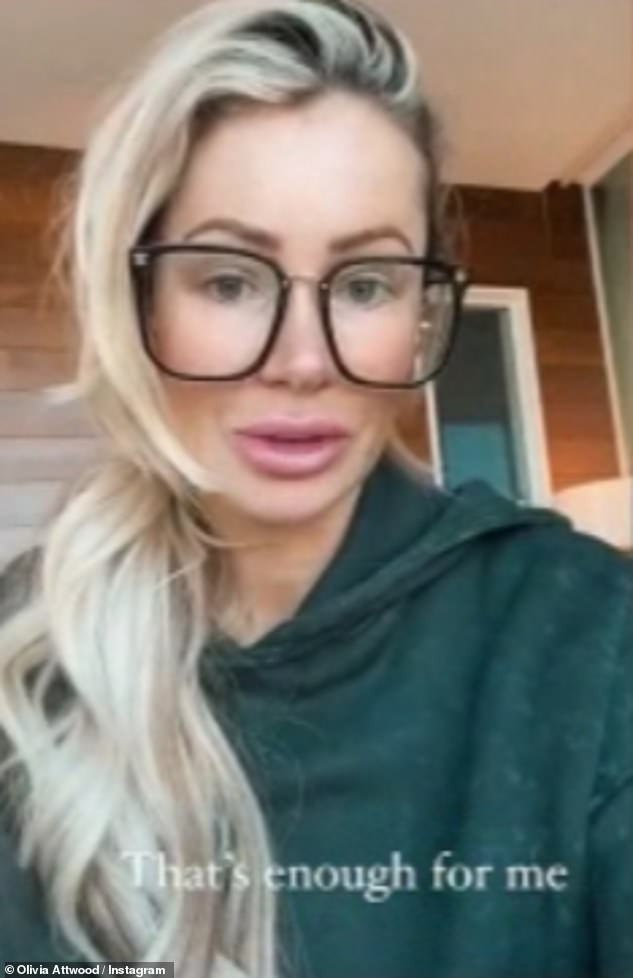 Had enough: On Tuesday, Olivia hit out at her influencer pals for claiming they are ‘working’ in sunnier climes during the global pandemic

But she promised never to deceive her followers: ‘I just feel like it’s giving a whole load of people a bad reputation when actually some people have just gone away and put their hands up and been like, “Yeah, I’m on holiday”.’

‘So many of my friends and family members are away and I’m just like you do you.

‘Nothing about the way they’ve handled it has really triggered me but then some things in the last 24 hours, people legit on their Stories going “you don’t know how hard it is to be an influencer”.

‘People are losing their family members daily, people can’t pay their rent, people’s life-long businesses are crumbling around them and you’re on your Stories on the beach telling us we don’t know how hard it is.’

Touching on her own experiences over the past year, the blonde continued: ‘I’m not saying my pandemic has been a genuine struggle, I still have a roof over my head.

‘If I decide to bail out of this s**tshow in a few months. Don’t all hate on me. I’m not gonna say I’m never going away again, but I won’t be telling you I’m going for work, I’m just gonna be honest.’ 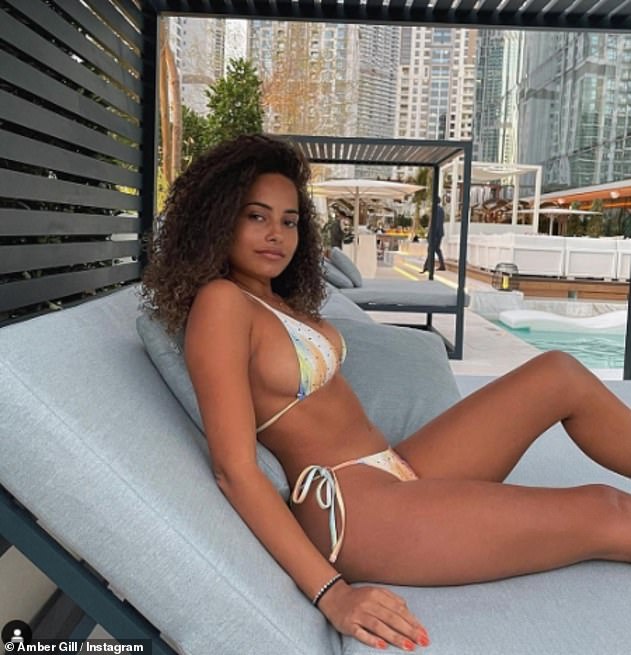 Sunnier climes: Olivia didn’t name any specific influencers but told her followers that ‘in the last 24 hours, people have legit been on their Stories going “you don’t know how hard it is to be an influencer”‘ (pictured Love Island star Amber Gill who is currently in Dubai)

Jennifer Garner is open to 'Alias' reboot: 'Sign me up' 0

Jason Rantz: Big Tech censorship – the Left should be most worried about this conservative purge 0