Home News Nurse, 23, hit her head and drowned after car plunged into river...

A NURSE hit her head and drowned after her car plunged into river as she drove home from night shift, an inquest heard.

After an intense police search, her body was found in her car in a fast-flowing river on Wednesday afternoon.

An inquest yesterday heard the young woman’s provisional cause of death was drowning and a head injury.

Coroner’s officer John Lewis said: “On Tuesday, October 1, 2019, Laurie Jones was reported as a missing person as she had not returned home from the University Hospital of Wales in Cardiff where she was employed as a paediatric nurse.

“Police are continuing their inquiries but do not suspect any third party involvement.”

Paediatric nurse Laurie had worked a 12-hour shift before setting off on the 17 mile journey in terrible weather conditions.

Motorists said the road where the woman’s car entered the river – the B4251 in Wyllie, near Pontllanfraith – was notoriously dangerous and driving conditions were poor.

The tragedy happened on Laurie’s first night back in work after a week’s leave catching up with friends and doing her Christmas shopping.

Jo and her husband Simon said their daughter was used to doing 12-hour shifts and had travelled the road between their home and the hospital “hundreds of times”.

Her dad said: “She was the most caring girl in the world.”

Her mum said she would often chose to do overtime at work as she was so committed to the job.

She said: “It is very demanding but it was all she ever wanted to do.

“She was adamant she wanted to do children’s nursing, she knew it was a lifetime commitment.

“Laurie was dedicated to looking after people, she looked after us as well.”

After passing A-levels in biology, chemistry, maths and history she went to Bucks New University in Uxbridge to study paediatric nursing.

She later spent 18 months training at London’s Great Ormond Street Hospital where she was so highly thought of she was offered a job.

But Laurie returned home to work in the paediatric accident and emergency department of the University of Wales.

Mum Jo said: “She loved it there and the children loved her – we’ve had so many messages from families she cared for.”


Obese man 'raped Match.com date who rejected him for being too fat'

Officers said they are not treating her death as suspicious.

A Gwent Police spokesperson said: “Laurie’s family would like to thank everyone for their kind words and support, and for sharing the appeal to help find Laurie when she was reported as missing.

“Our thoughts remain with the family and friends of Laurie Jones at this tragic time.” 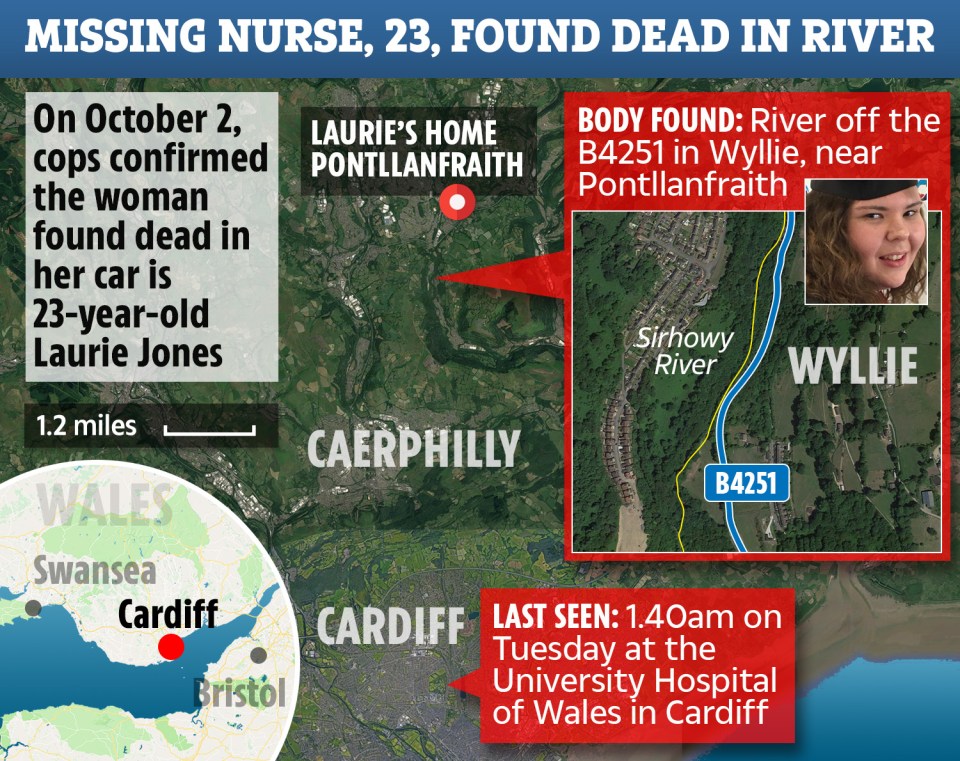 IT IS ALL OVER! Conor McGregor has beaten Donald ‘Cowboy’ Cerrone in seconds with a ferocious first-round knockout. Fight stopped in first round A knee, then...

NOT managed to pick up your copy of The Sun today? Fear not. You can catch all of our top tips right here. Getty Images...

CONOR McGREGOR returns to the octagon at UFC 246 against Donald ‘Cowboy’ Cerrone – and he will do so with some old and...

What is Conor McGregor’s entrance ring walk music he walks out to for fights?

IF previous entrances are anything to go by, Conor McGregor will be making quite the ring walk for his huge clash against Donald...

CONOR McGREGOR will receive a £2.3million guaranteed purse for his UFC return against Donald Cerrone. The Irishman makes his cage comeback in Las Vegas...

Rosie Huntington-Whiteley hasn’t lost her Spark as she shows off some...