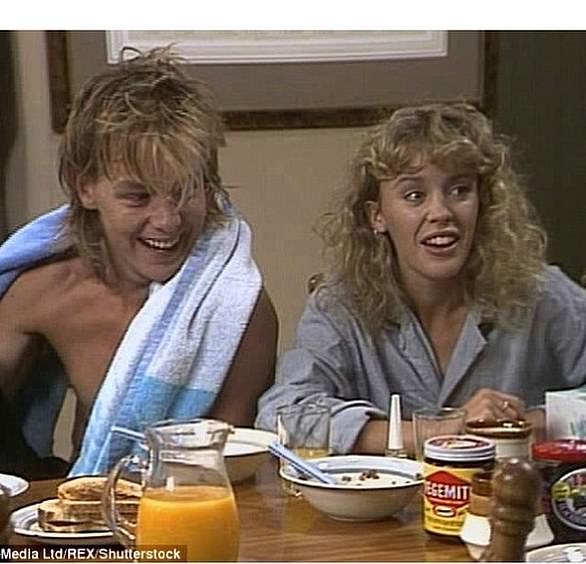 The pint-sized songstress is arguably the show’s most famous exports after finding worldwide fame as a singer when she left the show.

She initially won hearts with her on-screen romance with Scott Robinson, played by Jason Donovan

The Kylie and Jason public obsession reached fever pitch when the couple got together in real life and they had a hit record together, Especially For You.

But superstardom beckoned for Kylie and a new relationship with INXS front man, the late Michael Hutchence, soon put an end to the Kylie and Jason fairy tale. 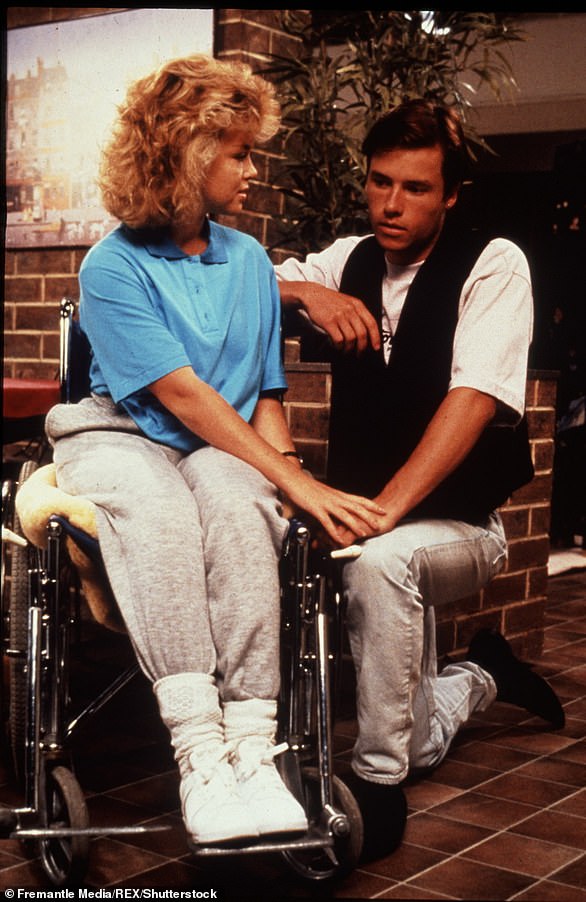 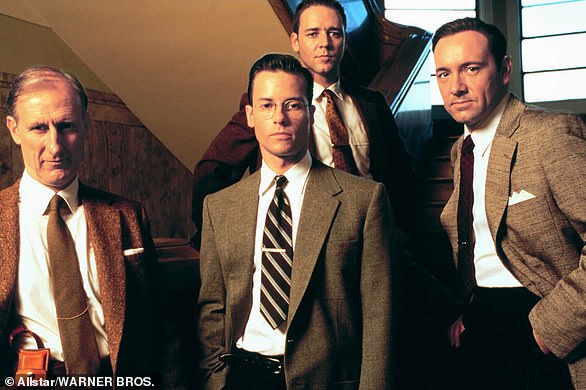 After his stint on Neighbours as bad boy Mike Young (left) Guy Pearce (centre) forged a successful career in Hollywood, starring in films such as Memento and The Hurt Locker

British-born Guy, another original cast member, had a four-year stint as Mike in Neighbours before hitting the big time.

He has appeared in hit films including L.A. Confidential, Memento and The Hurt Locker and has been nominated for Golden Globe Awards.

He also starred in Genius, in which he stars as writer F. Scott Fitzgerald.

In 2015, he split from his wife, psychologist Kate Mestitz – his childhood sweetheart who he married in 1997. 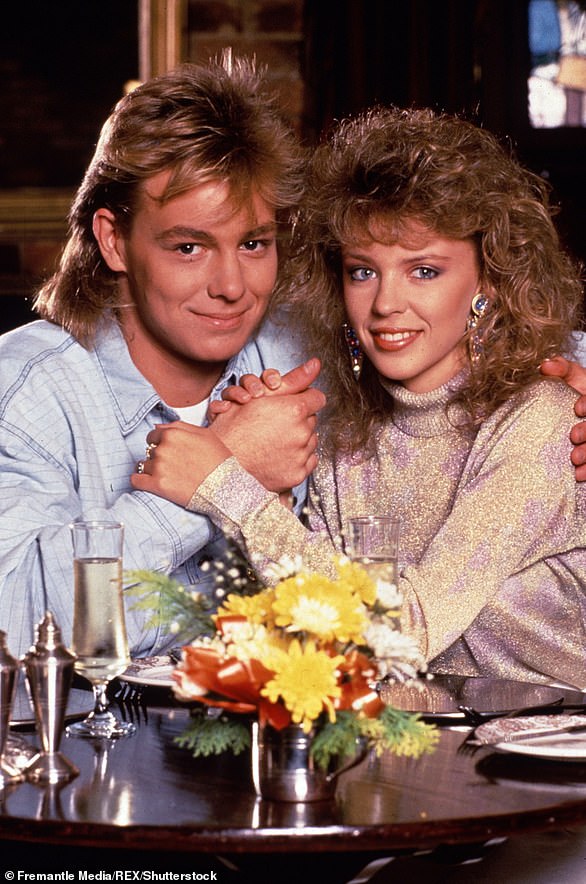 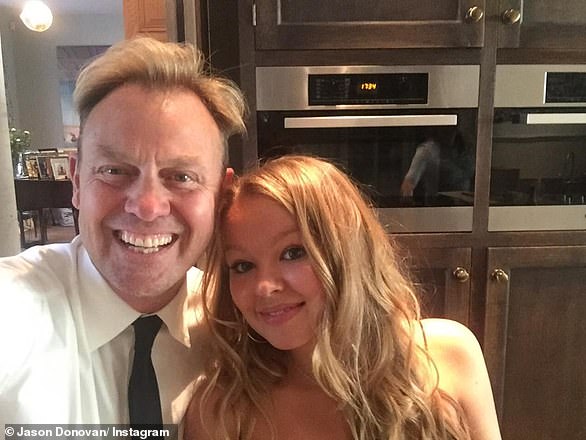 Like his on-screen wife Kylie, Jason left the soap to pursue a pop career and while he may not have been quite so lucky, lucky, lucky with his recording career he too topped the charts in the Eighties.

He’s starred in stage productions such as Joseph and the Amazing Technicolour Dreamcoat and Priscilla Queen Of The Desert.

The actor hit a rough patch due to alcohol and drug abuse, suffering a cocaine-induced seizure at Kate Moss’s 21 birthday party in 1995.

But he has since regained an image befitting of his alter Neighbour’s ego Scott Robinson with a regular DJ gig on Heart FM.

He hasn’t hung up his microphone for good however. He toured the UK with his Ten Good Reasons and Greatest Hits Tour. 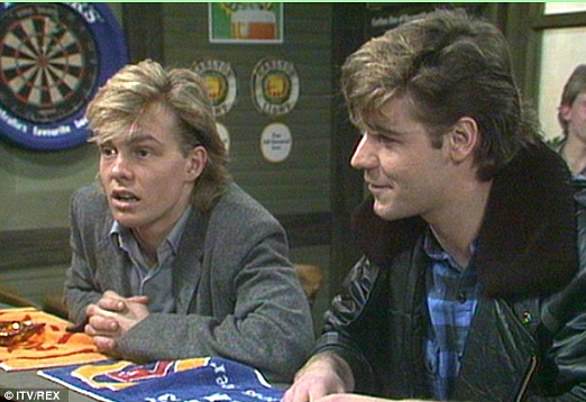 Another Neighbour to hit the big time is megastar Russell Crowe, 50, who won an Oscar for his role in Gladiator.

He is one of Hollywood’s leading male stars but before he was rubbing shoulder with the likes of Ridley Scott, he played ex-con Kenny Larkin in four episodes in the Eighties.

His career shows no sign of slowing down and he’s currently filming The Mummy in which he plays both Dr Jekyll and Mr Hyde. 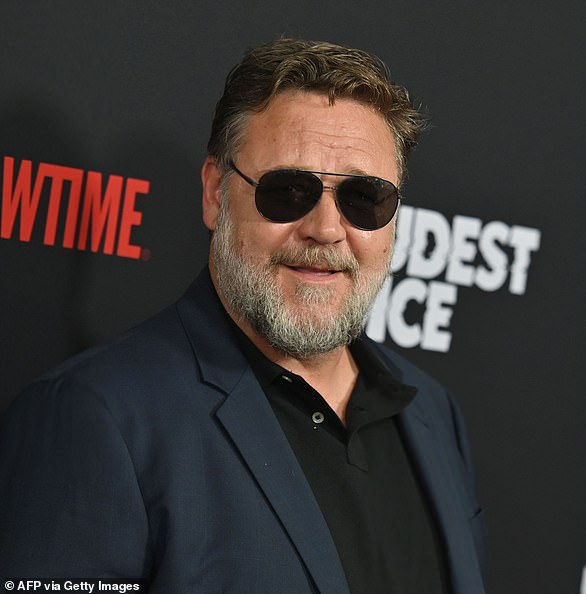 Star of the Hunger Games and Miley Cyrus’s fiance Liam Hemsworth launched his career playing wheelchair-bound hunk Josh Taylor on the street from 2007 to 2008.

He’s since taken Hollywood by storm in his role as Gale Hawthorne and will soon hit screens in Independence Day 2.

Liam’s brother Chris Hemsworth, star of Thor, also made a brief appearance in Neighbours as Jamie Kane before heading for Hollywood.

Margot Robbie, who started her on screen life in Neighbours 2008, has since hit the big time starring opposite Leonardo DiCaprio in The Wolf of Wall Street and Will Smith in Focus and Suicide Squad.

The chemistry between her and Smith was so intense they were rumoured to be having an affair on-set – something they both strenuously denied – but the gossip further elevated Margot’s profile.

She’s now married to British assistant director Tom Ackerley after meeting on the set of Suite Francaise and is in major demands for film roles.

As well as starring as Harley Quinn in a Suicide Squad spin-off, she also starred as Tonya Harding in I, Tonya.

Natalie Imbruglia left her role as Beth Brennan and kissed goodbye to her onscreen surfer-dude husband Brad Willis to launch a singing career in 1997.

The album Left In The Middle sold seven million copies and her single Torn became an instant hit.

Other albums followed other they weren’t as commercially successful as her first.

In 2015, she made a comeback with the album Male, featuring cover versions of songs made famous my male lead singers, which reached number 20 in the UK album charts.

The London-based star divorced her Australian husband of five years, Silverchair frontman Daniel Johns in 2008 saying the distance between them was too much.

Delta Goodrem played Nina Tucker, is now a coach on Australia’s The Voice.

She’s had eight number one singles and three number one albums in Australia and sold over six million albums worldwide.

However, she’s often hit the headlines for her love life thanks to relationships with a number of high profile men.

In 2004, she dated Australian tennis player Mark Philippoussis and then had a long-term relationship with former Westlife singer Brian McFadden.

They got engaged but split up in 2011 after which Delta than had a year-long relationship with singer Nick Jonas of boy band the Jonas Brothers.

She’s been dating he musician beau Matthew Copley for more than two years.

Holly Valance left her role as Felicity ‘Flick’ Scully in 2002 to pursue a music career and scored a hit with Kiss Kiss.

She had a role in popular U.S drama Prison Break but has not yet managed to crack America like Margot Robbie.

In 2011, she impressed with her dance moves on Strictly Come Dancing, where she finished in fourth place.

She is now married property mogul Nick Candy and they had a daughter in 2013, Luka Violet Toni Candy.

Her billionaire husband treated Holly, 33, to a £26 million luxury yacht and drafted in hypnotist Paul McKenna to cure her of her seasickness.

Jesse Spencer. who become a teenage heart throb when he played Billy Kennedy in the soap from 1994 to 2000, left the show with high hopes to crack Hollywood.

He went on to star in hit U.S series House alongside Hugh Laurie and is now plays a leading role in Chicago Fire as well as taking on film parts.

The star is also a keen musician and plays violin in the group Band From TV, with his former co-star Hugh Laurie

He had a Number Two hit, Mona, and appeared in Grease on the West End stage.

But he went back to his first love of soap by playing school teacher Grant Mitchell on rival Oz show Home & Away and remains on TV screens down under in The Dr Blake Mysteries.

Alan Dale, played Jim Robinson from when the first show aired till his departure in 1993 when his character famously suffered from a heart attack. He appeared in 869 episodes and was the head of one of the show’s most popular families.

He took a few years to him to put Jim behind him and resurrect his acting career but in 2000 he found success in the U.S. in hit shows The OC and then Ugly Betty.

He also appeared in 24 and Lost and most recently worked on Dominion and NCIS.

Stefan Dennis is the only original cast member still on the show playing Paul Robinson.

He took a break from the part in the Nineties for a stab at a pop career with one hit song – Don’t It Make You Feel Good.

He then returned to Ramsay Street in 2004 where he has featured in a number of their most successful storylines including a who-dunnit when he was pushed off the roof of Lassiters.

His real-life son, Declan,  will soon be joining him on the soap

As Harold Bishop, Ian Smith became one of the show’s most legendary characters.

He was there from day one and his relationship with Madge Bishop was a focus of numerous plots while his friendship with Lou, who nicknamed him ‘jelly belly’, often added comedy to the show.

He was famously killed off in 1991 – or so we thought – as he then made a miraculous return to appear in the show on and off from the Nineties to today.

Anne Charleston is another Neighbours legend after playing Madge Bishop from 1985 to 1992.

She has appeared in various other shows and stage productions since leaving the soap but thanks to her long-enduring appeal, she’ll always be now known as Madge.

She’s appeared in the 30th anniversary episode as a ghostly apparition.

Loading...
Newer Post
Gary Kemp wants a Spandau Ballet reunion – but only if singer Tony Hadley agrees
Older Post
How to find everything Microsoft knows about you

With childrens' vaccinations down amid coronavirus, doctors get creative 0