She has been showing off her incredible sense of style during her daily commutes to work.

And Myleene Klass, 42, was at it once again on Friday as she headed to the Smooth FM radio studios.

The pretty brunette looked incredible wearing a black satin camisole which had a lace trim and a pair of loose fitting polka dot trousers as she headed to work after a very restless night’s sleep. 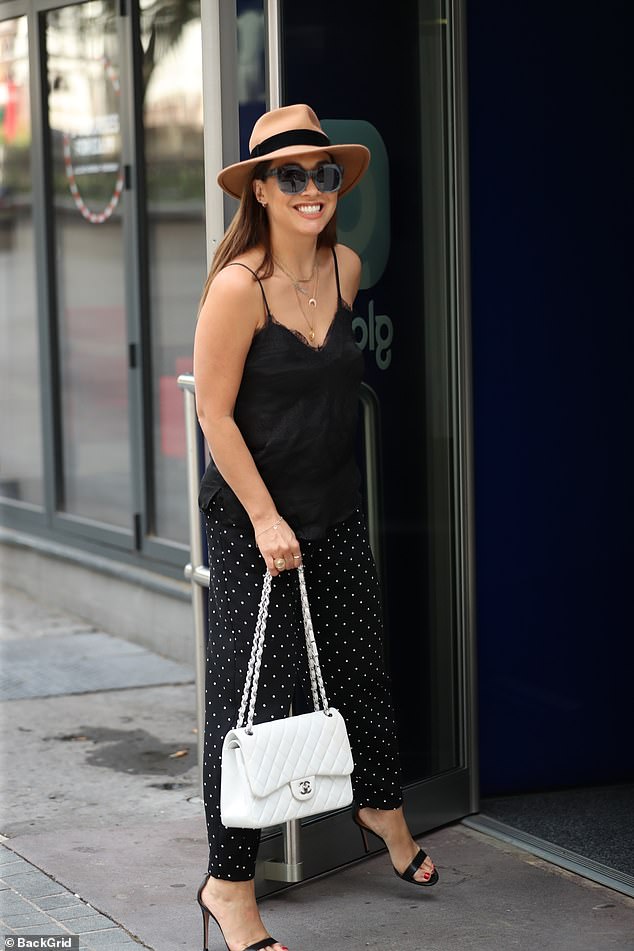 Well-heeled: Myleene Klass looks stylish in a satin camisole and polka dot trousers as she arrived at work at Smooth FM on Friday carrying a white Chanel bag

She carried a white quilted Chanel bag on her arm and completed her look with a tan coloured hat.

Adding some extra inches to her height, she wore strappy black sandals and vintage-style oversized sunglasses.

Myleene shared an update on Instagram Stories as she celebrated having the luxury of an air conditioned workplace during the UK heatwave.

The mum of three revealed in a video that she was exhausted as no one in her family has been able to sleep in the scorching temperatures. 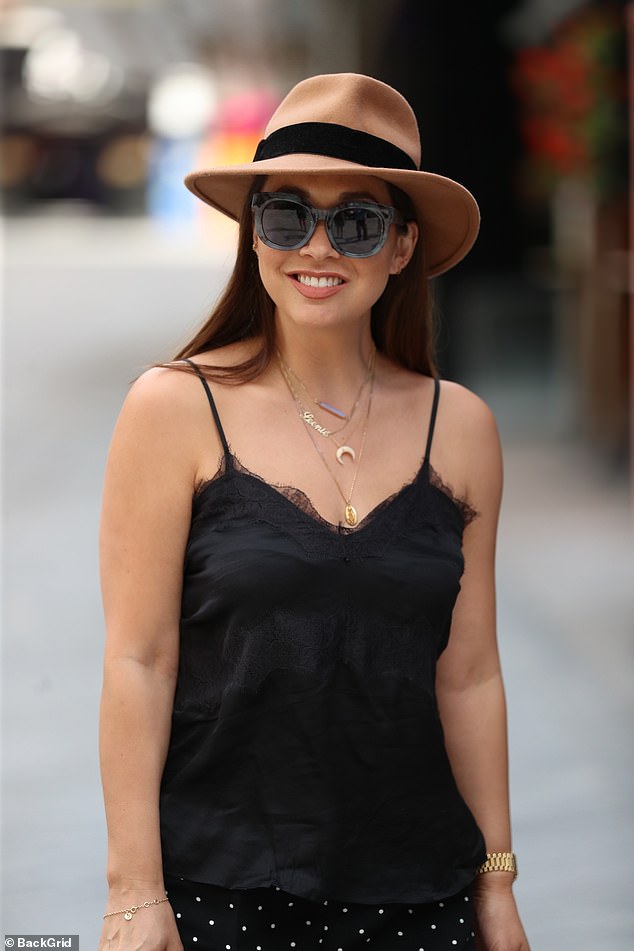 Hats off to her: Myleene recently admitted that like the rest of the nation, she is looking forward to July 4, when salons reopen once again following the coronavirus pandemic

‘I feel like I’ve won the lottery, there’s aircon in the studio,’ a delighted Myleene told her fans, quipping: ‘Now if I could just bring my baby in here to sleep at night.’

The video was captioned ‘No one has slept in my house for 3 days. Apollo has been soooooo sweaty and bothered. Moving the famalam into @smoothradio studios if this weather continues.’

Myleene recently revealed she would like to have another baby and hopes to marry her beau Simon, 45, in 2021, after they welcomed their baby boy Apollo, ten months. 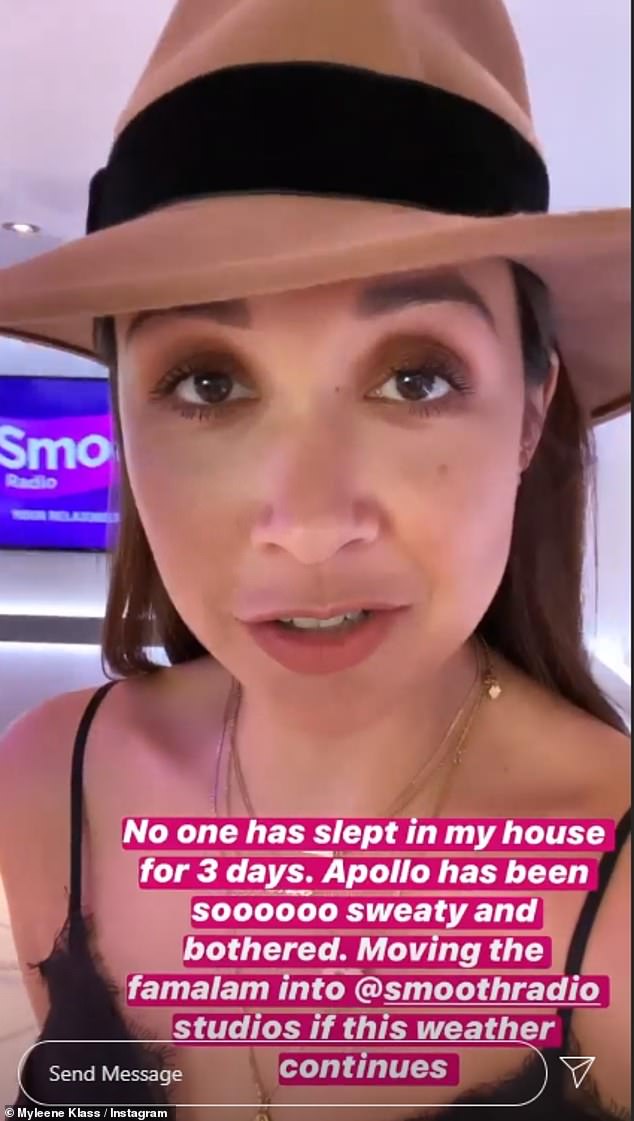 Exhausted: The mum of three revealed in a video that she was exhausted as no one in her family has been able to sleep in the scorching temperatures

She has two daughters, Ava, 12, and Hero, nine, from her previous marriage, while Simon has a son and daughter the same age as Myleene’s girls with his ex-wife.

Speaking in an interview with Hello! magazine earlier this month, she said: ‘I would not say no to another baby. I don’t want to tempt fate. Who knows what life has got planned for you?

‘We didn’t know we would even get him [Apollo]. The kids would love it if we had another baby. Simon is raring to go.’ 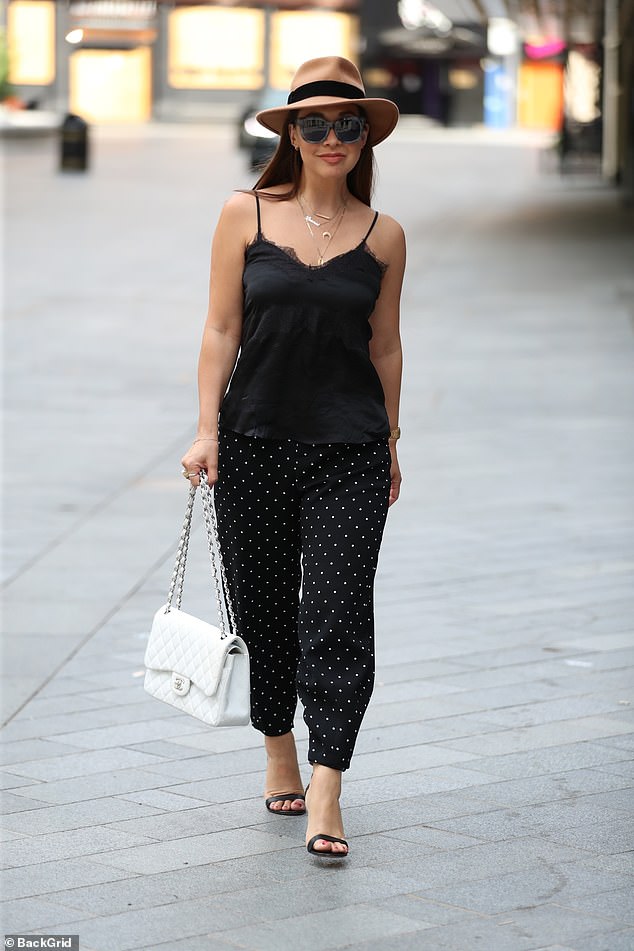 Myleene also joked that her girls have been ‘on Simon’s case’ to propose and said they’ve already got the nuptials ‘all planned out’.

She added: ‘My girls are definitely on Sim’s case about it [marriage]. I suppose it’s just children’s way of solidifying what’s around them.

‘The kids just want a party. Sim doesn’t get a say in it either. It’s genuinely down to the children.

‘They’ve got their own conflab going on between them and have planned it all out.

‘They have even decided the baby will be the ring bearer! There are no weddings this year. But 2021? They would love that!’

The classically-trained musician was previously married to Graham Quinn, but the celebrity bodyguard left her heartbroken when he walked out of the family home on her 34th birthday in April 2012.

The incident came just six months after the couple’s wedding, but they had been together for 11 years at the time, after meeting when Graham became the bodyguard for Myleene’s pop group Hear’Say in 2001. Love: Myleene recently revealed she would like to have another baby and hopes to marry her beau Simon, 45, in 2021