A BRIT tourist who vanished into the Australian bush after hitting his head while camping has been found dead.

Police officers today found the body of Aslan King, 25, days after he disappeared while on a road trip with friends along the famous Great Ocean Road in Victoria.

The group were camping at Princetown, near the famous Twelve Apostles in Victoria, when he went missing.

The body was found in a creek just over half a mile from where Mr King was last seen.

A statement from Victoria Police said: “Officers are yet to formally identify the body; however, it is believed to be Aslan King who was last seen at a camping ground on Old Coach Road about 2am on November 23.”

A report will be prepared for the coroner.

Mr King, an illustrator from Bristol, had only moved to Australia two weeks before he disappeared.

At the time of his disappearance, The Age reported Mr King had been having some drinks with friends when his face went blank.

His friends tried to restrain him after he appeared to have a seizure but he then ran into bushland. 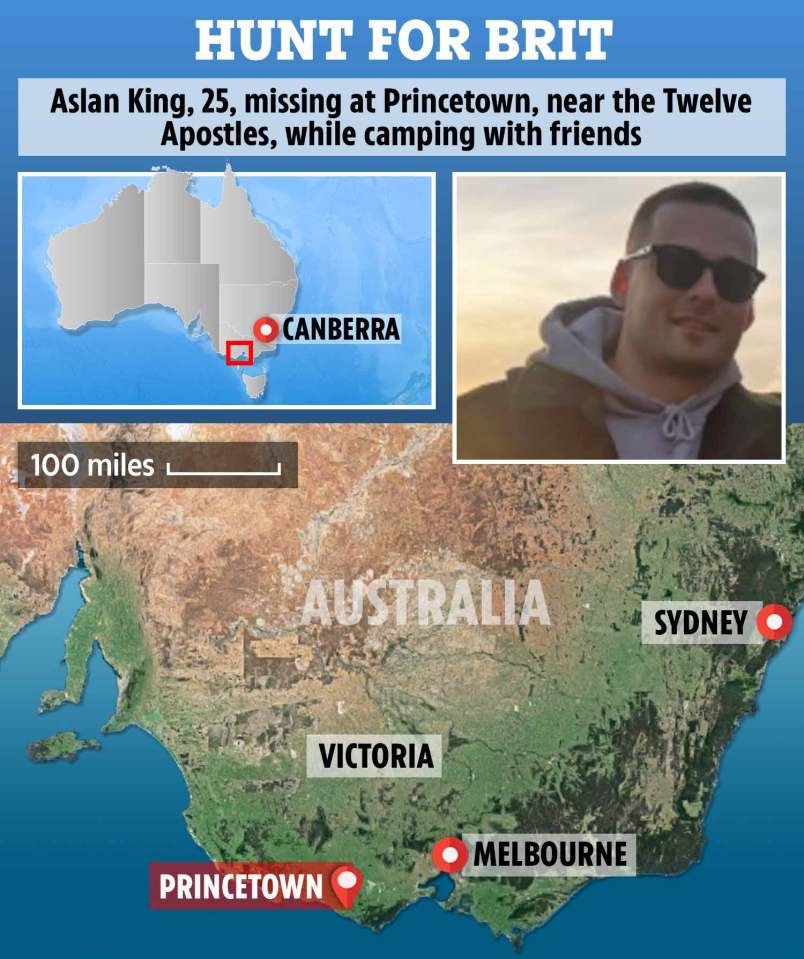 SWING THEN YOU'RE WINNING


My blood turned to ice when I found my girl, 13, was raped & killed by a monster

The young man had previously shared photos and clips from his trip Down Under.

In one video, he can be heard yelling out excitedly during the road trip.

In a statement, the Foreign Office said: “Our staff are seeking further information following the disappearance of a British man near Princeton, Australia, and are in contact with the Australian police.”

Man Utd fans over the moon with young team to face Astana as Chong...

I am stressing about exams and having panic attacks and don’t want to tell...

KFC is giving away free gravy to all customers this Monday to help beat the January blues. All you need to do is visit...

Both teas are thought to have originated from China, as far back as 2737 BC.And, as time went on, tea reached Portugal, where...

RHONJ’s Joe Giudice insists there’s ‘no competition’ between him and ex Teresa for daughters’...

REAL Housewives of New Jersey star Joe Giudice has hit back at claims he’s in ‘competition’ with ex Teresa for their daughters’ love. The...

Vitamin D warning: Stomach pain could be a sign you’ve taken too many supplements

It says: “Taking too many vitamin D supplements over a long period of time can cause too much calcium to build up in...

ROMELU LUKAKU has made a huge impact at Inter Milan – and now he has a bed to match. The Belgian striker, 26, showed...

Bank Closures Taking their Toll on Businesses Across Greece

KSI vs Logan Paul 2 rules: How many rounds was fight...

RHONJ’s Joe Giudice insists there’s ‘no competition’ between him and ex Teresa for daughters’...