'What you wear reflects how you feel': Millie Mackintosh puts on a colourful display in a rainbow tie-dyed tracksuit for a series of p


‘What you wear reflects how you feel’: Millie Mackintosh puts on a colourful display in a rainbow tie-dyed tracksuit for a series of playful snaps

By Nicole Conner For Mailonline

Millie Mackintosh put on a colourful display in a rainbow tie-dyed tracksuit in a series of snaps to reflect how she feels.

The former Made In Chelsea star, 30, looked radiant as she posed for a series of pictures that shared with her 1.4million Instagram followers on Friday.

She struck a casual pose with her hands in the pockets of her rainbow yellow, pink and blue co-ord in one snap, joking that the print ‘hid stains’ caused by her baby. 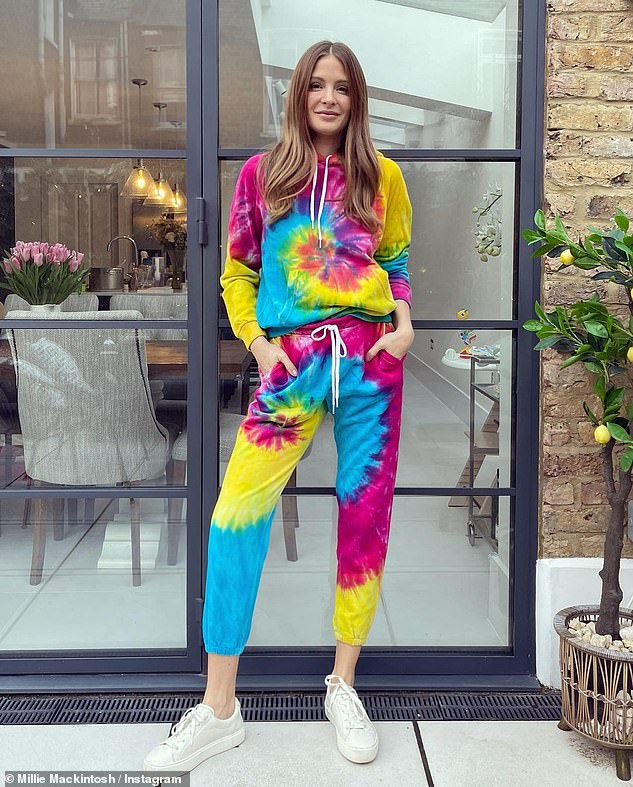 Colours of the rainbow: Millie Mackintosh, 30, put on a colourful display to reflect how she was feeling in a rainbow tie-dyed tracksuit in a series of snaps she shared on Instagram on Friday

Millie then wore the yellow hood up and pulled a series of silly poses as she showed off her bright ensemble.

In one picture she balanced on one leg as she beamed for the camera.

The mother-of-one kept her outfit casual and styled the look with a pair of white trainers for comfort. 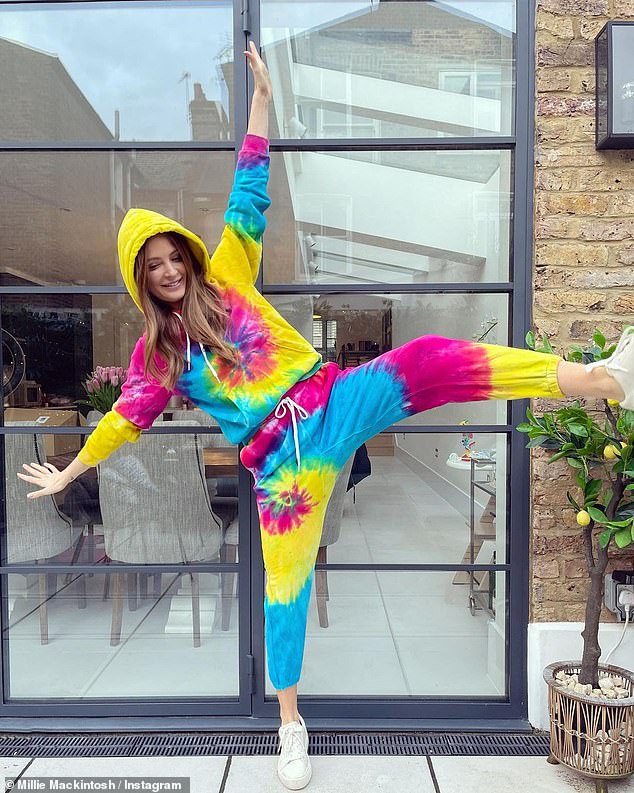 Playful pose: The former Made In Chelsea star balanced on one leg as she showed off her yellow, pink and blue tie-dye tracksuit

Her sleek chestnut tresses hung in a loose wave and framed her face and she opted for a natural makeup palette.

She captioned the snaps: ‘The rain has finally gone, the sun is shining, and it’s Friday! I’m taking a break from my usual black, cream and beige and dressing up like a rainbow, I always think that what you wear reflects how you feel and vice versa.

‘Also wearing tie dye is a great way of hiding all the stains you get from having a bubba – mums out there I would recommend!

‘What’s your go to outfit, when you’re looking to brighten up your day?’

Recently, Millie revealed she’s tried be more ‘honest and candid’ on social media since giving birth to her daughter Sienna. 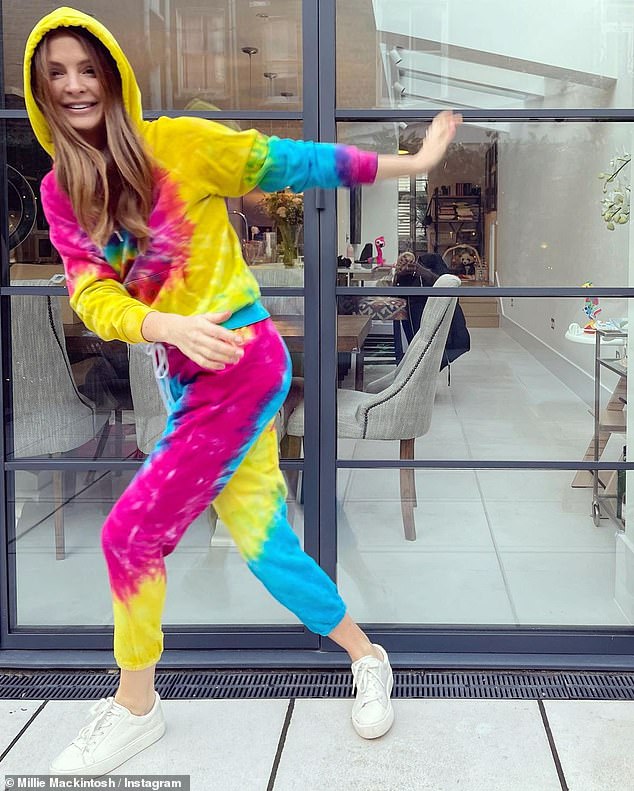 Tie-dye: The mother-of-one wore the yellow hood up as pulled a series of silly poses and showed off her bright ensemble

Hiding stains: Millie shared the snaps with her 1.4million Instagram followers, writing that she thinks ‘what you wear reflects how you feel’

She welcomed her first child with husband Hugo Taylor, 34, in May, said she’s received a positive response from other parents for her open discussions of motherhood.

However Millie added that she has found it ‘hard’ juggling her social media presence with taking care of her daughter, but ‘doesn’t feel any pressure’ to present a perfect depiction of her life online.

Speaking on the Scummy Mummies podcast, Millie explained: ‘I try not to think about every time I post how many people are gonna see it because the pressure of it makes you not want to post anything at all.

‘But since becoming a mum and when I was pregnant I wanted to share in a more honest candid way and not just nice photos. 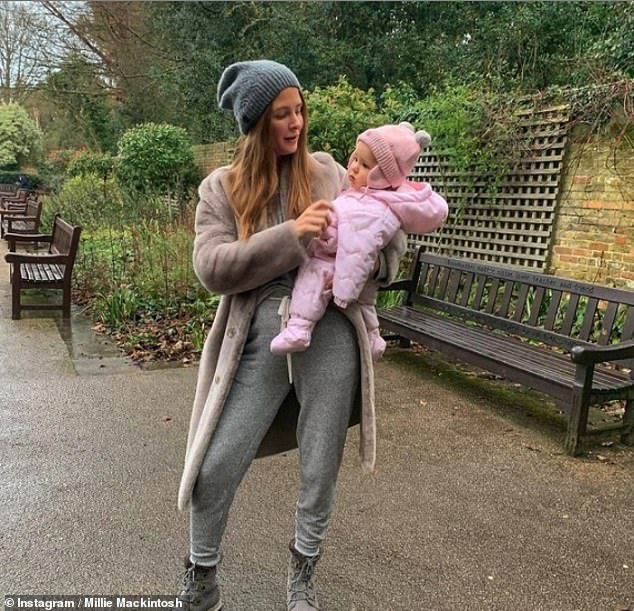 Speaking out: The star said she’s received a positive response from other parents for her open discussions of motherhood (pictured with Sienna, nine months)

‘I found I had a really great response from other mums and I’ve found it as a really good platform for connected with other people.’

Millie added: ‘I don’t feel that much pressure to show my life is perfect because I try to be more honest and share more experiences on my motherhood journey, it’s a weird time right, we’re not going anywhere we’re not getting dressed up, and I don’t feel particularly Instagrammable.

‘People really love it when I show a day with Sienna, like the ins and outs. What I find hard is the balance of time and energy it takes having an account especially when you’re posting a lot yourself, being a mum and the balance of time I spend using social media.

‘When I’m with Sienna I want to focus on her, that’s something I find as part of the juggling act of parenthood and trying to find a good balance with.’ 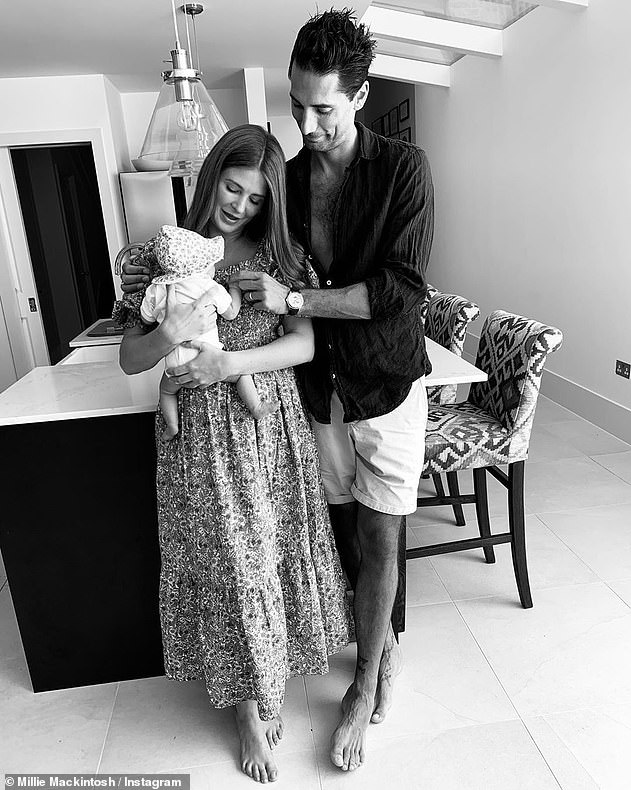 First-time parents: Millie and her husband Hugo Taylor, 34, welcomed Sienna to the world last May

Cameron Diaz says she has 'no idea' if she will ever act again: 'Never say never' 0

Traveling without quarantine? It may soon be possible with new airline industry app 0