She became a first-time mother last month, when she and her husband Hugo Taylor welcomed their daughter Sienna into the world.And Millie Mackintosh


She became a first-time mother last month, when she and her husband Hugo Taylor welcomed their daughter Sienna into the world.

And Millie Mackintosh, 30, gave her Instagram followers a glimpse into how busy her life has become as a new mother on Thursday, when she shared a hilarious post.

The Made In Chelsea star uploaded a snapshot of herself cradling her offspring in one arm, while using her other hand to fed herself from a bowl of pasta. 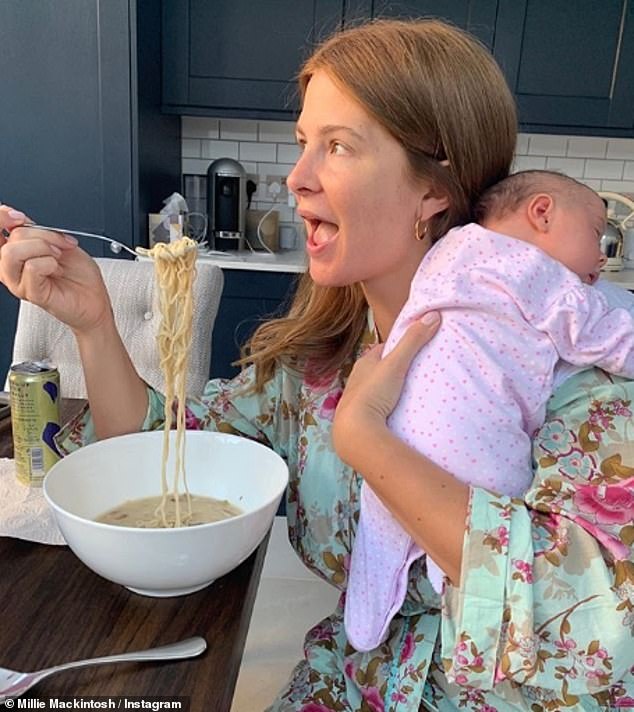 Multitasking mama: Millie Mackintosh shared a shot of herself crading her newborn daughter Sienna while indulging in a bowl of pasta on Thursday

Posing with her mouth open as she lifted the spaghetti-wrapped fork to her mouth, the reality star still managed to retain her usual glamour amid the multitasking.

Going makeup-free for the snapshot, Millie donned a floral green kimono, while she opted to accessorise with a pair of gold hoop earrings.

With her sandy brown tresses swept to one side, she kept a hand on Sienna, who relaxed on her mother’s shoulder while wearing a patterned pink baby grow. 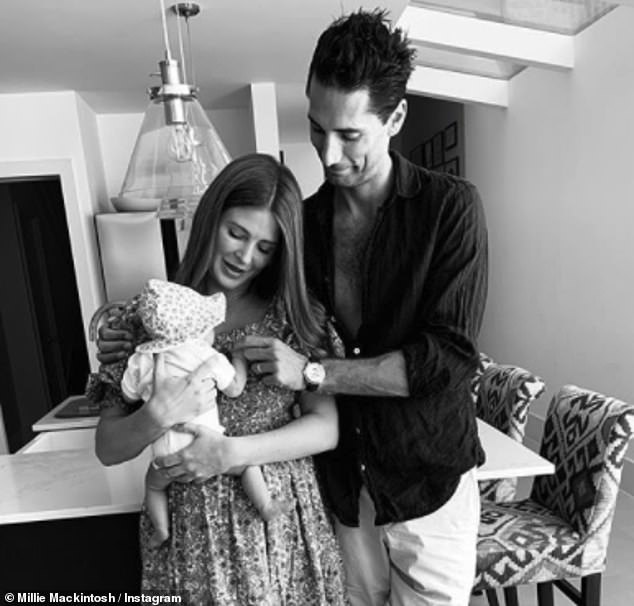 Proud new parents: On May 1, Millie and husband Hugo Taylor welcomed their first child, daughter Sienna Grace and the blogger gushed she was ‘on cloud nine’ following the birth

Captioning the post, which garnered more than 50,000 likes in two hours, Millie wrote: ‘Who can relate? #mumlife.’

Her post comes two days after she and Hugo returned to the venue where they tied the knot, this time as proud new parents.

The MIC stars visited the estate Tuesday for the second anniversary of their big day, but this time with seven-week-old daughter, Sienna.

Posing on the front steps, the couple recreated their wedding snaps, but with their adorable daughter in tow. 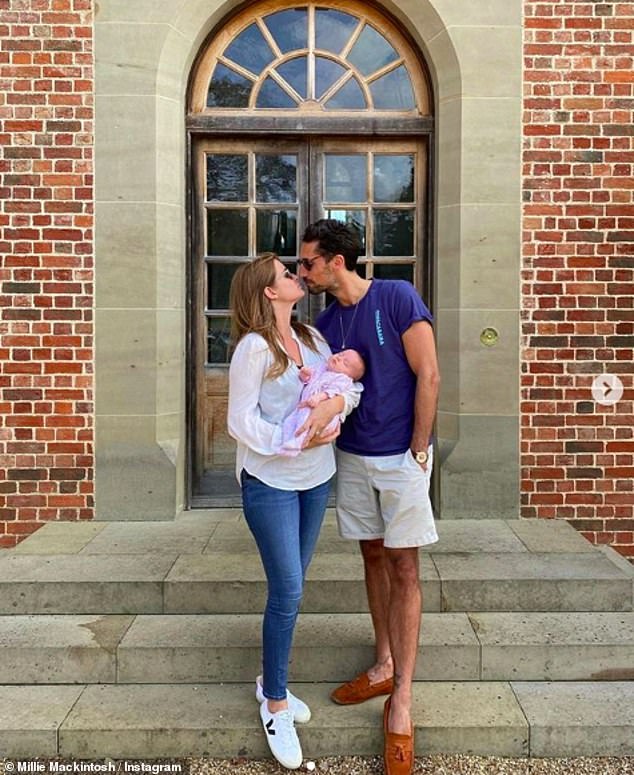 Family: They tied the knot at Whithurst Park in a lavish ceremony back in 2018. And two years on, Millie and Hugo returned to the venue, this time as proud new parents

The reality starlet cradled daughter Sienna in her arms and leaned forward to pucker up to Hugo, who looked dapper in navy top and cream shorts.

Sharing the sweet snap on Instagram, Millie penned: ‘Standing on the steps where we said “I do” feels even more special now we have you’.

Millie and Hugo tied the knot in an elaborate ceremony at Whithurst Park on June 22, 2018, but had their intimate official wedding service at Chelsea Town Hall earlier in the month. 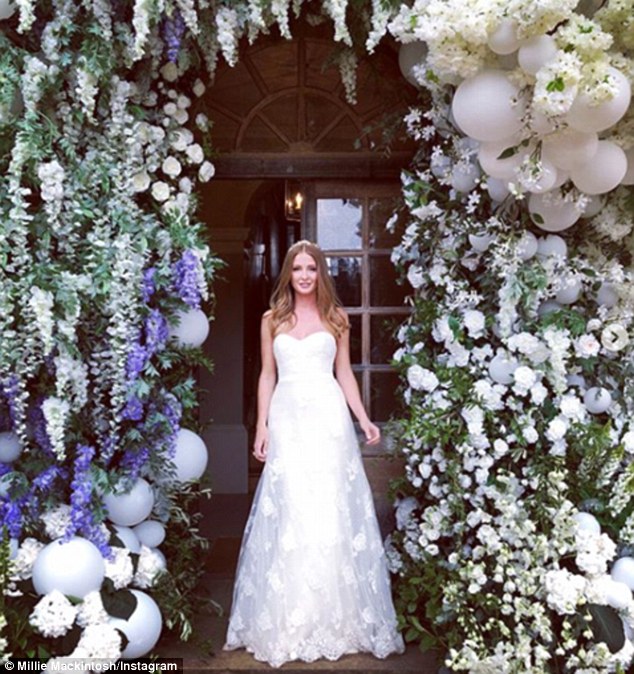 Bridal bliss: Millie and Hugo tied the knot in an elaborate ceremony at Whithurst Park – which is owned by Hugo’s uncle – in front of their nearest and dearest on June 22, 2018

On May 1, Millie and Hugo welcomed their first child, daughter Sienna Grace.

She also praised sunglasses entrepreneur Hugo for being present during labour amid the coronavirus pandemic, which has caused most hospitals in the UK to allow only one birthing partner.

Revealing they settled on Sienna Grace’s name ‘months’ before the birth, Millie added of their first weeks of parenthood: ‘We’re on cloud nine; it’s gone so quickly.’

She continued: ‘We’ve been in our little love bubble at home, cherishing those newborn moments, whether that’s her sleeping on me or just lapping up all the cuteness.

‘Time has gone so quickly. She is so adorable, even down to the little noises she makes.’

Hugo added: ‘Sienna has turned our world upside down. It’s like first love all over again – that wondrous feeling of excitement, joy and endless possibility for the future. I can’t wait to watch her grow.’ 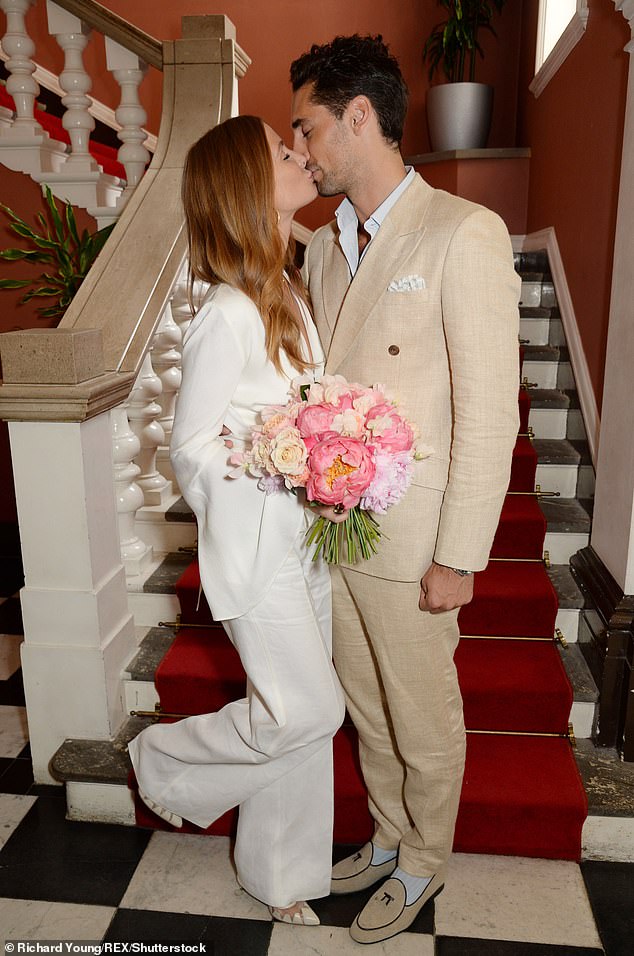 Twice as nice: Prior to their ceremony at the Sussex estate, Mille and Hugo had their intimate official wedding service at Chelsea Town Hall

Stomach bloating: One relaxing pastime could ease the discomfort of a bloated belly 0

Donna Brazile: Biden would benefit by picking a Black woman for VP — and so would America 0

Kelly Osbourne reveals she had gastric sleeve surgery two years ago amid weight loss: 'It’s not a quick fix' 0

Full moon 2020: When is the next full moon? How does the lunar cycle affect YOU? 0