'Desperate for a new connection': Miley Cyrus shows off her abs in a ripped crop top and skeleton pants as she poses for some sassy sn


‘Desperate for a new connection’: Miley Cyrus shows off her abs in a ripped crop top and skeleton pants as she poses for some sassy snaps

By Nicole Conner For Mailonline

She  has never been known to be shy about her body.

And Miley Cyrus took to her Instagram Stories to show off her sensational abs and in a series of snaps she posted on Tuesday.

The singer, 28, opted for a grunge look as she posed in a tiny cropped black vest which had a ripped hem and a pair of skeleton-print pants. 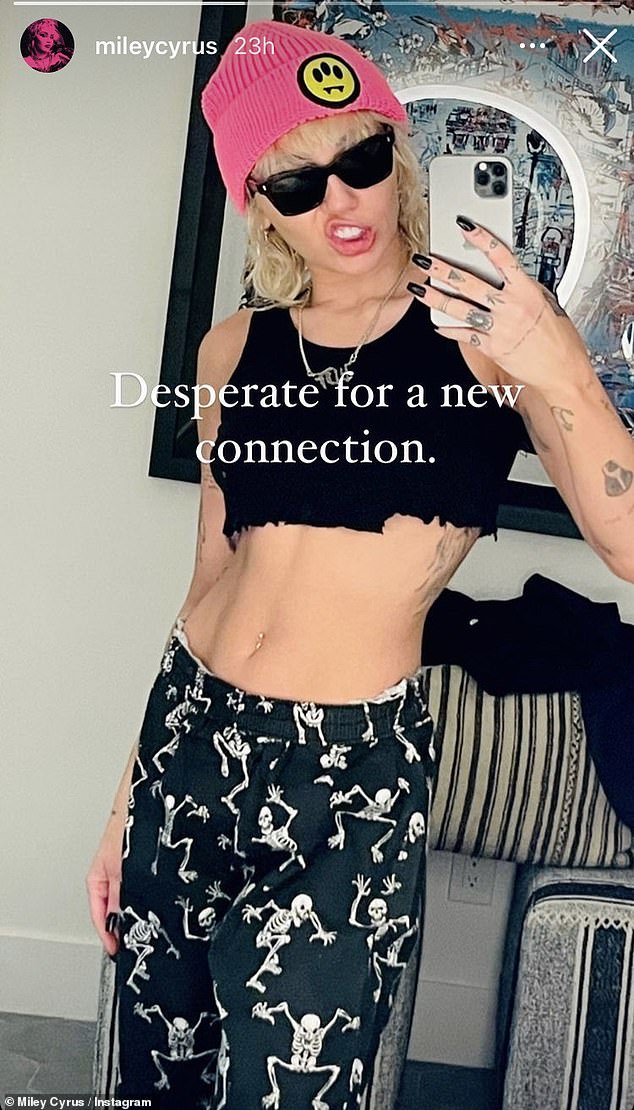 ‘New connection’: Miley Cyrus, 28, took to her Instagram Stories to show off her sensational abs in a cropped black vest with a ripped hem in a series of snaps she posted on Tuesday

Miley covered her blonde tresses with a neon pink hat featuring an alien emblem on the front, and captioned the snap: ‘Desperate for a new connection.’

She turned her petite frame slightly to show off her tiny waist as she flashed her dazzling white teeth for the camera.

The hitmaker accessorised her look with a pair of sunglasses and a single silver chain in the mirror selfie.

She uploaded another picture, this time showcasing her slender legs in a pair of cycling shorts. 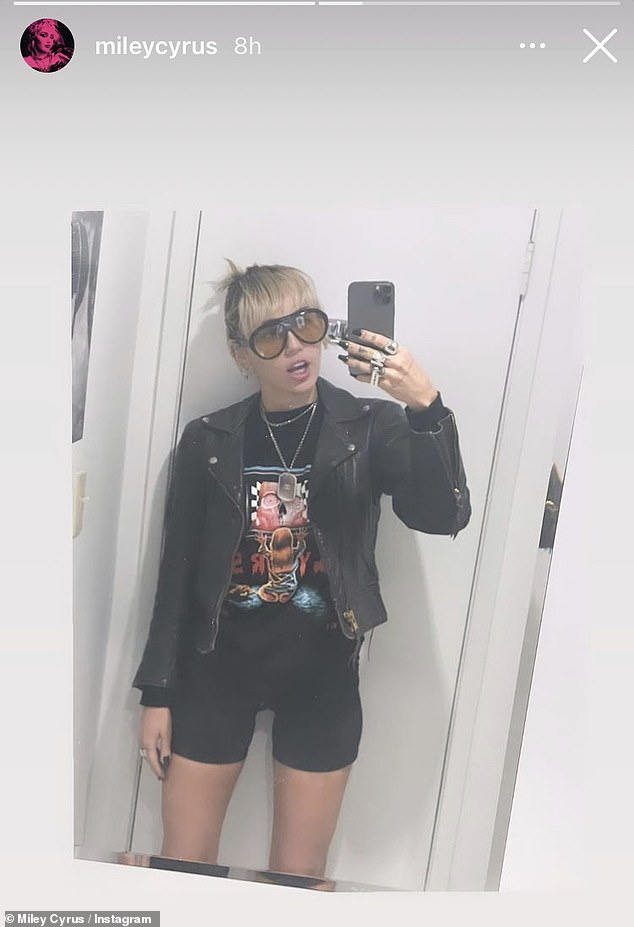 Grunge chic: The singer showcased her slender legs in a pair of cycling shorts which she paired with a leather jacket and orange tinted sunglasses

The star paired her shorts with a graphic t-shirt and a leather jacket to add to her grunge aesthetic.

Keeping her accessories minimal but bold, she opted for a large pendant necklace and an array of large silver rings, showing off her black manicured nails.

Miley wore a large pair of orange tinted sunglasses to tie her cool look together as she posed open mouthed for the camera.

Her blonde locks were pinned up, leaving her full fringe to cascade down her forehead in the picture. 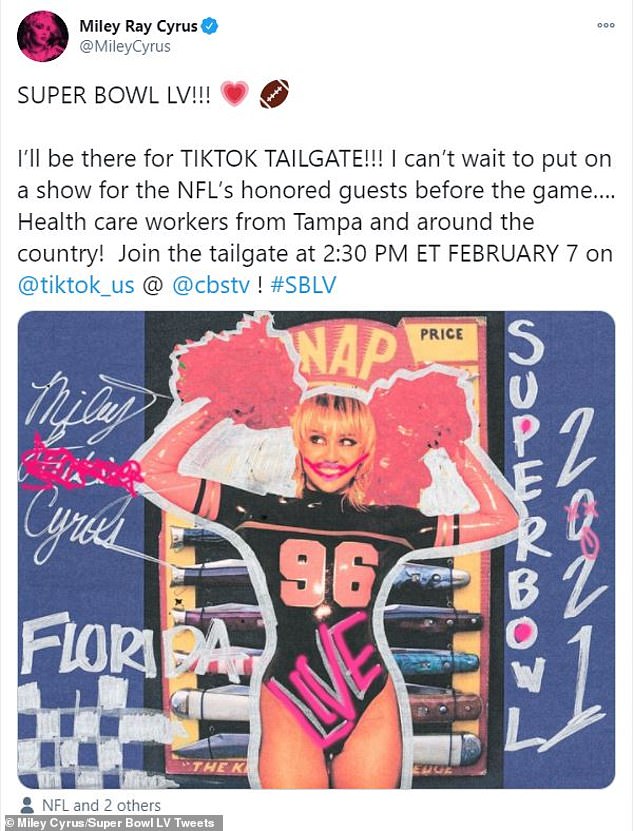 Promotion: Miley Cyrus took to her Twitter account to promote her upcoming appearance at Super Bowl LV on Sunday

On Sunday, the songstress took to Twitter to promote her upcoming TikTok Tailgate scheduled ahead of the Super Bowl kick-off on February 7.

She shared her excitement for the performance, writing: ‘SUPER BOWL LV!!! I’ll be there for TIKTOK TAILGATE!!! I can’t wait to put on a show for the NFL’s honored guests before the game.’

She wowed in the accompany yearbook-style photo, putting on a black latex cheerleading outfit with striped pink sleeves.

The Wrecking Ball singer’s outfit featured a large number 96 in an athletic typeface emblazoned across its front. 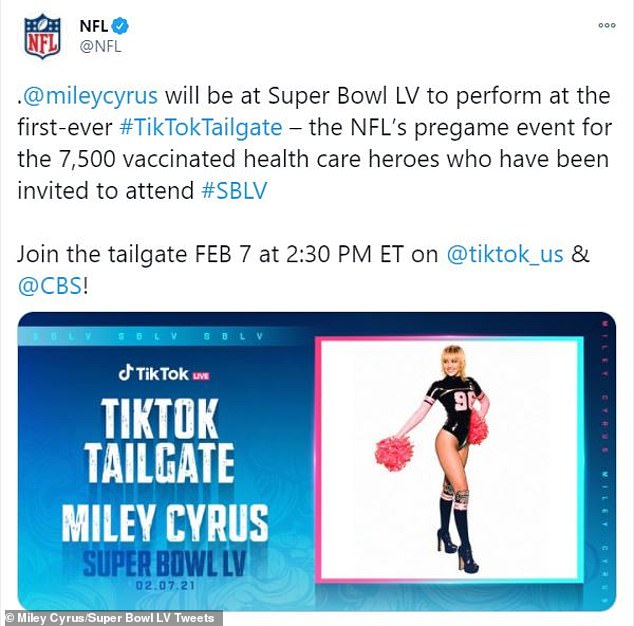 Go team: The Wrecking Ball singer’s outfit featured a large number 96 in an athletic typeface emblazoned across its front

The singer also appeared in a promotional shot that was posted to the official NFL Twitter account, where it was noted that her show would be attended by 7,500 health care workers who had all been vaccinated against COVID-19.

The 55th Super Bowl, which will be held in Tampa, Florida, will also feature a halftime performance by The Weeknd, who was announced as headliner in November of last year.

Rapper Jay-Z has also been announced as one of the show’s producers.

Due to restrictions placed on the sporting event by the coronavirus pandemic, the total stadium capacity will be limited to 22,000 people, which will make the game the lowest attended Super Bowl in history. 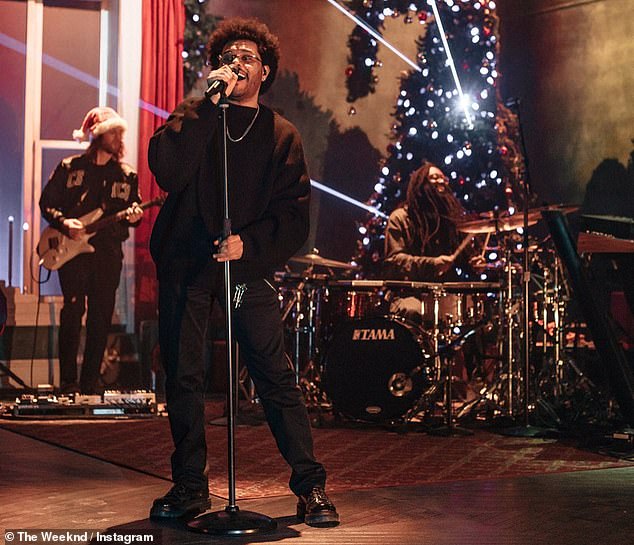 Performances: Other big names on the lineup for the championship game include The Weeknd who will headline the Super Bowl LV halftime show