Katy Perry loves Kanye West as an artist… but says his presidency would be 'a little wild'
Street artist creates outdoor piece to get people drinking again – from a safe distance
Shakira seemingly criticized by J Balvin, her fans skewer artist online: 'Disgusting'

By Paul Chavez For Dailymail.com

Megan Thee Stallion won the BET Award for Best Female Hip-Hop Artist on Sunday after presenting a new Mad Max-like video of Girls In The Hood and Savage.

The 25-year-old singer accepted the award from home due to the coronavirus pandemic during the three-hour show broadcast on CBS. 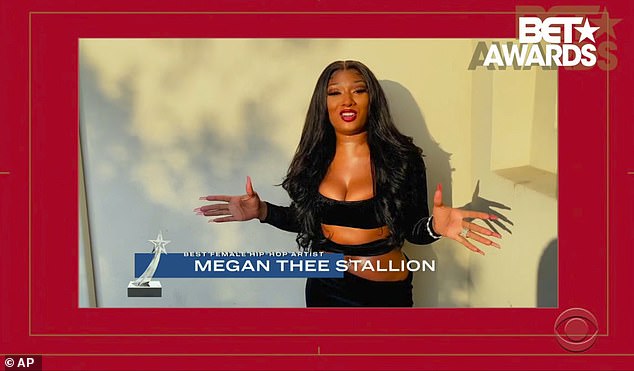 ‘Most importantly, thank you hotties,’ Megan added using her nickname for her fans.

Megan, real name Megan Jovon Ruth Pete, said she used to watch the BET Awards all the time growing up and thought that she could be there one day accepting an award.

‘And now it is. Thank you so much. And hotties, I’m just going to keep going for y’all,’ added the Texas native.

Megan performed her new song Girls In The Hood in a desert music video that opened with a trio of women on motorcycles driving along a barren landscape with one wearing a Black Lives Matter face mask. 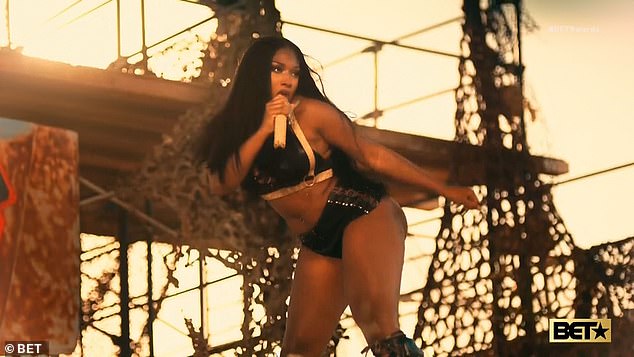 Center stage: The 25-year-old Texas singer performed Girls In The Hood and Savage out in the desert 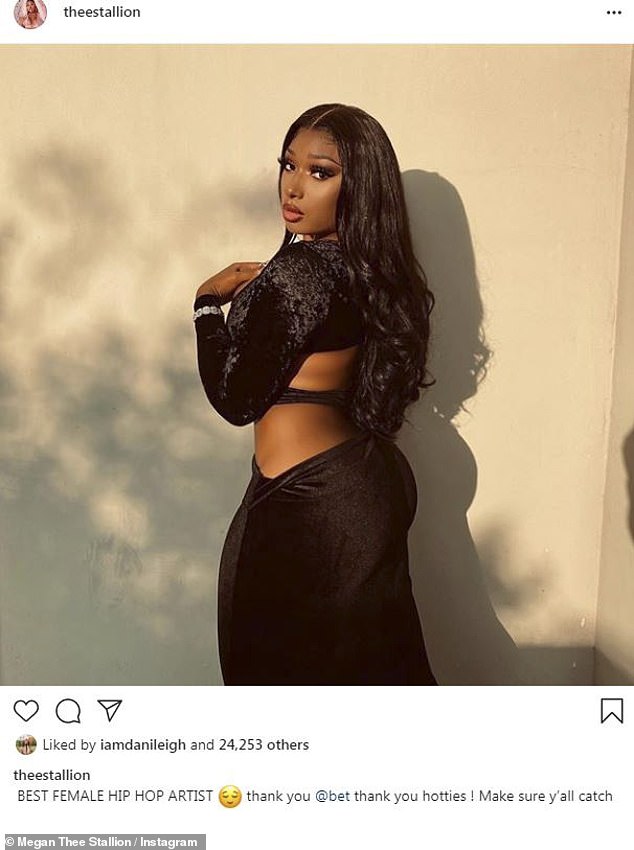 At home: Megan accepted the award at home due to the coronavirus pandemic during the three-hour ceremony broadcast on CBS

They came upon Megan who broke into song while leading a crew of biker women and backup dancers as they paid homage to the Mad Max films by Australian filmmaker George Miller, 75.

‘What’s up BET?,’ asked Megan as Girls In The Hood came to an end and she rode a motorcycle to an empty outdoor stage.

Megan then took center stage to perform Savage with a black power fist symbol as a backdrop and a Black Lives Matter signs amid the scaffolding. 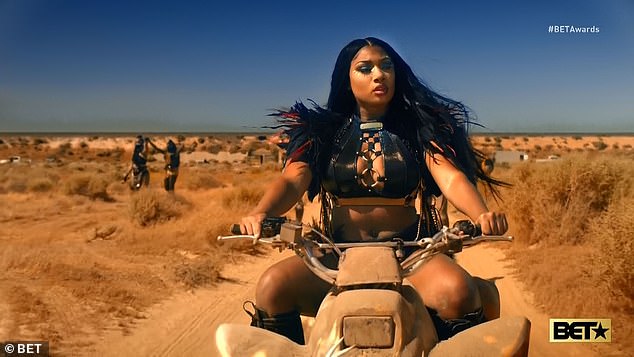 Road warrior: The rapper was leader of a motorcycle gang of women in the video that paid homage to the Mad Max films by Australian filmmaker George Miller 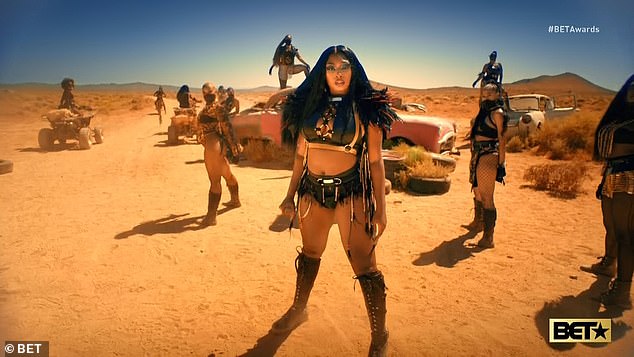 New song: Girls In The Hood was just released Friday by Megan 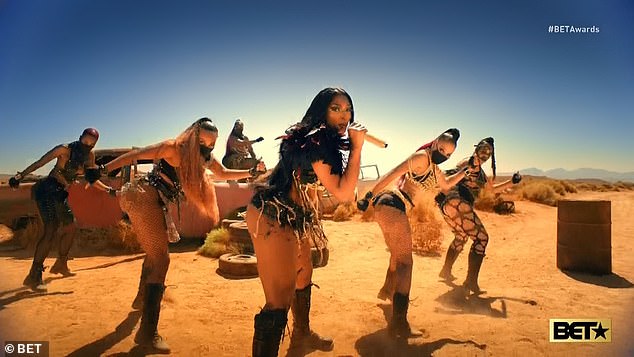 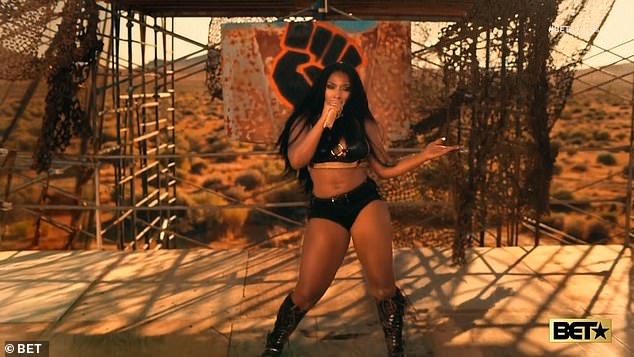 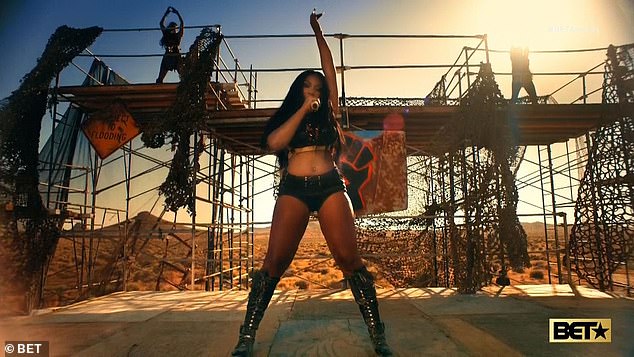 Dance moves: The Houston rapper showed her dance moves on the stage 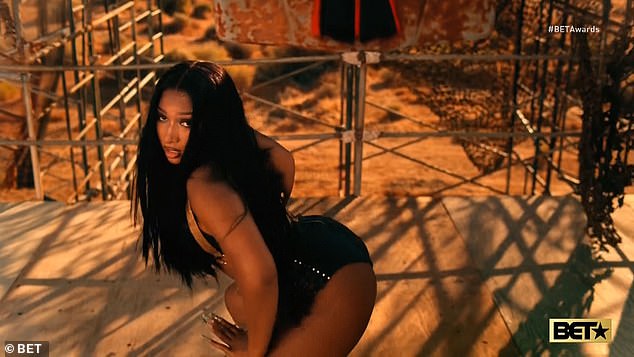 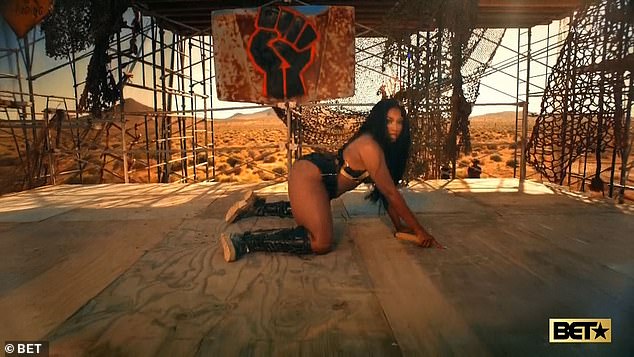 All fours: Megan got down during her performance

She showed her curves and sexy dance moves as stalked the stage and twerked.

Megan then gave her best impression of Lord Humungus from The Road Warrior as she performed atop a chrome off-road vehicle through the desert.

‘Thank you BET!,’ she shouted while riding off into the sunset. 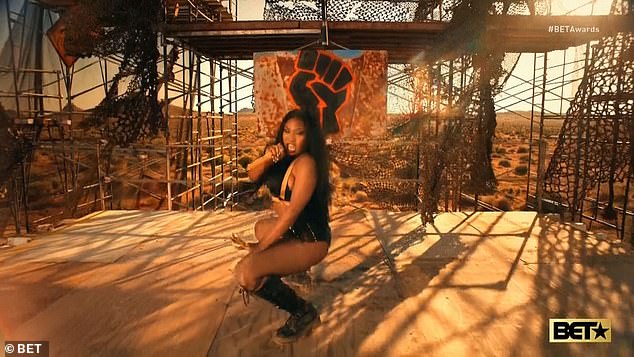 Killed it: Megan killed it with her performances in the desert

Megan’s mother Holly died in April 2019 after a long battle with a cancerous brain tumor.

Girls In The Hood was released on Friday and samples fromm the 1987 rap single Boyz-N-The-Hood by the late Eazy-E. 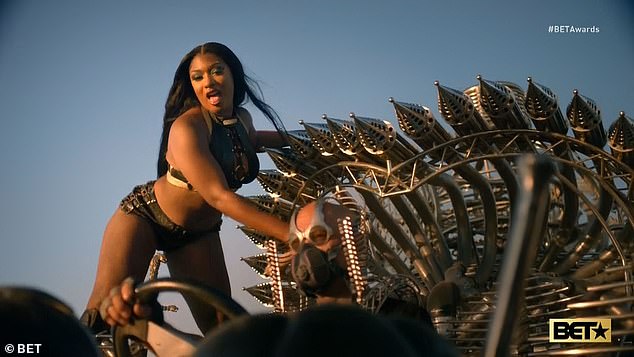 Riding off: The rapper gave her best impression of Lord Humungus from Road Warrior 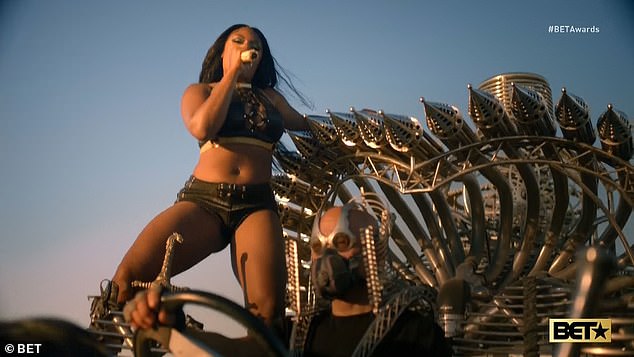 Mask on: The singer was driven around by a man wearing a mask reminiscent of The Road Warrior

Kristina Hernandez: Homeschooling during coronavirus – here's why my kids will be with me this fall 0

'Not banned it at all!' China's latest medicine list STILL includes wildlife ingredients 0

How to get rid of hiccups: The one drink that could stop or prevent your hiccups 0