A FURIOUS granddad has been slapped with a £100 fine – after visiting the same McDonald’s drive-thru twice in one day.

Ian Scates, 62, slammed the fast food giants for the ‘totally ridiculous cock-up’ after he was accused of leaving his dark grey Toyota Yaris in the car park for nearly ten hours.

The pensioner visited the restaurant briefly in the morning and again later that evening and was outraged after receiving a letter in the post whacking him with a £100 fine.

He said: “They say that I was parked there for more than nine hours – I’m not being funny but who is going to sit in a McDonald’s car park for nine hours?

“It’s totally appalling the way it’s been handled. I’ve been using McDonald’s since the 1980s but I won’t be going back.”

The retired gardener has diabetes and visited the Petersfield drive-thru to get a blood sugar boost while on his way to look after his 18-month-old granddaughter Iliyah. He bought a wrap of the day and a Coca Cola at 11am before leaving soon after. 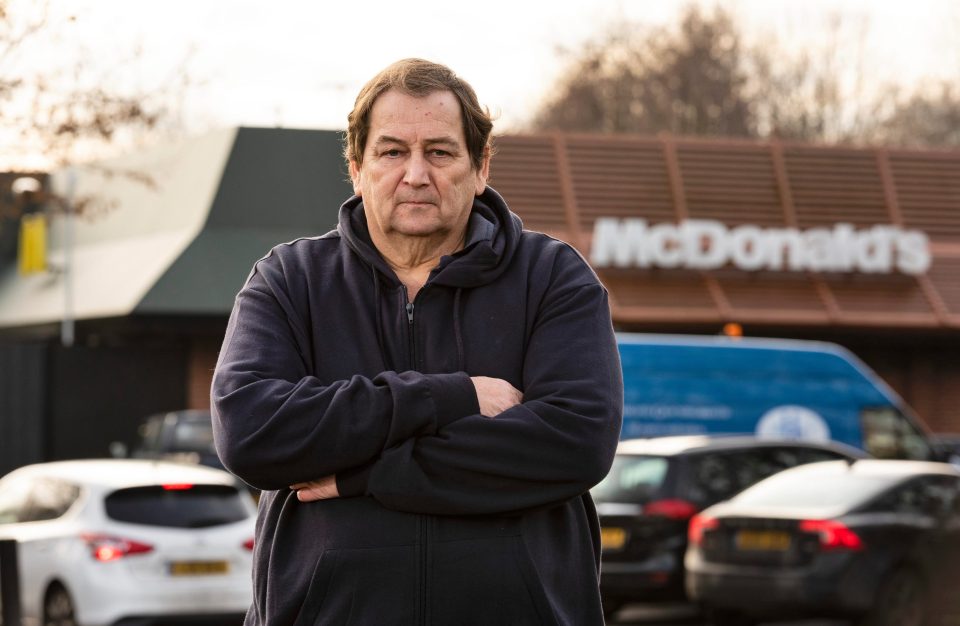 Ian has vowed never to return to the restaurant

He returned around 9pm after a long day and picked up a £1.79 coffee for his journey home.

It is believed a camera error meant his departure was not recorded after his first visit.

The enraged pensioner sent messages and photographs proving he was elsewhere on the day but said he had been told by the restaurant’s management it was not their problem.

He said: “It’s totally ridiculous, their coffee is cheap but this whole cock-up isn’t.”

McDonald’s has denied responsibility and said the car park is operated by ParkingEye.

A McDonald’s spokesman said: “We are aware of this incident and have encouraged the customer in question to contact the car park operator directly with any concerns they may have.

“As our car parks are operated and managed by independent providers, they are always best placed to assist.”

Most read in news


Monster raped 11 victims, aged 11 to 71, after being let out of jail by MISTAKE

Mr Scates has tried to appeal the fine with ParkingEye but claims he cannot reach anyone at the company.

A ParkingEye spokesman said: “ParkingEye is a member of the British Parking Association (BPA) and operate a fully audited appeals process.

“Motorists with mitigating circumstances are encouraged to appeal. ParkingEye has yet to receive a response to our correspondence.”

Cancer-stricken Alex Trebek has ‘rehearsed’ his farewell speech on final Jeopardy! show after 37...

Mom beaten unconscious in front of her screaming kids at roller rink by couple...

Stephen Barclay says HS2 WILL go ahead despite £106bn price -with scrapping it costing...

JUVENTUS legend Alessandro Del Piero claims it is Pep Guardiola’s destiny to boss the Italian club. But they face a fight to get him...

KATE Middleton has unveiled a sweet photo of Princess Charlotte, four, smelling a bluebell. The adorable shot was taken at the family’s Norfolk...

NAOMI Campbell shocked her fans with a topless selfie in an intimate bedroom snap. The supermodel bared it all in the photo with a...

PRESSURE was tonight mounting on the Crown Prosecution Service over its pursuit of fragile Caroline Flack — as horrifying new details of her...

What is a DNA fingerprint and how does DNA profiling help...