Malin Andersson details the painful experience of losing her daughter

'Without hope there is nothing': Malin Andersson details the painful experience of losing her daughterFor support with child bereaveme


‘Without hope there is nothing’: Malin Andersson details the painful experience of losing her daughter

Malin Andersson has detailed the painful experience of losing her daughter before revealing how she found her strength again in an emotional post.

Sharing a picture of herself in a hospital wheelchair at Great Ormond Street last year, the former Love Island star, 27, said that ‘hope’ got her through the toughest times during the short period her baby was alive.

Malin’s daughter Consy was born seven weeks premature on December 23, 2018, but tragically passed away a month later on 22 January. 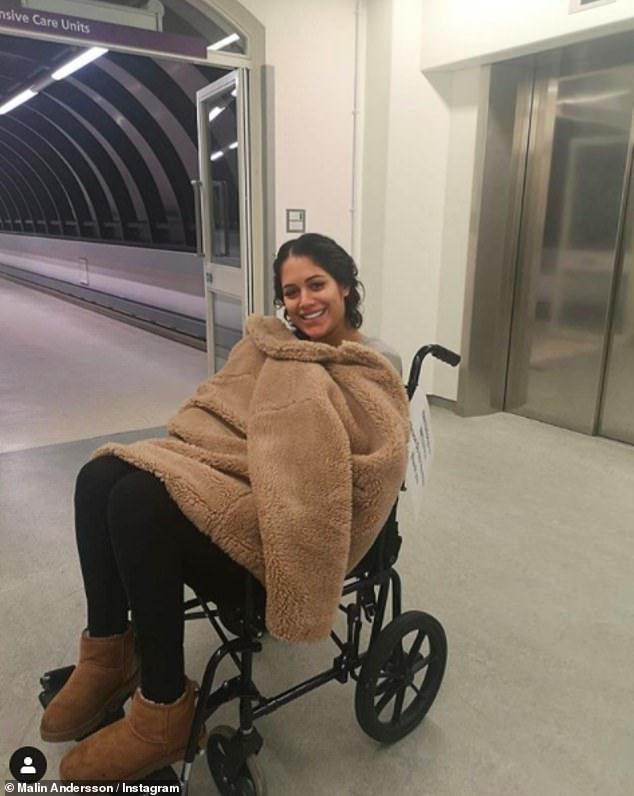 Emotional: Malin Andersson has detailed the painful experience of losing her daughter before finding her strength again as she shared a picture in a hospital wheelchair on Sunday

In the lengthy caption, an emotional Malin penned: ‘There aren’t many words that describe pain. The word says enough itself.

‘Here’s a photo of me at Great Ormond Street hospital. It was Christmas Day and my girl was in her incubator. I was staying at the parents accommodation. I don’t speak much about how I felt in the 4 weeks she was alive.

‘You see I’m smiling here, forcing it for this photo. I couldn’t stand due to my c section being so raw, my hair matted and face pale as anything. My eyes were a representation of sleepless nights and worry. 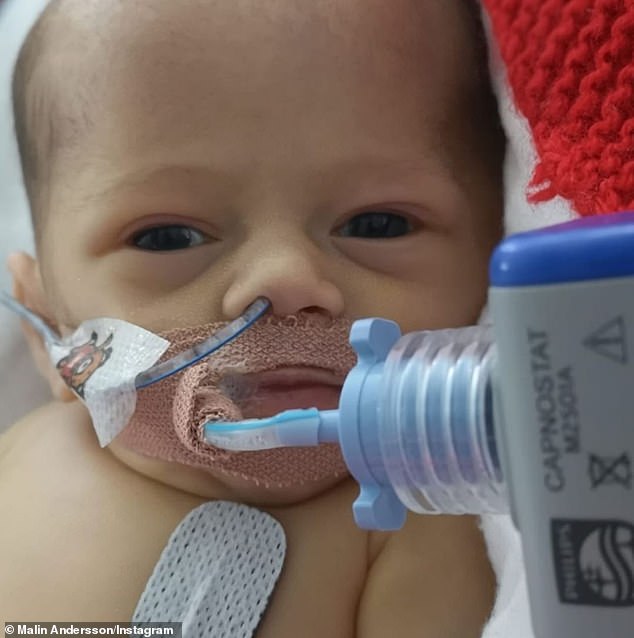 Tragic: Malin’s daughter Consy was born seven weeks premature on December 23, 2018, but tragically passed away a month later on 22 January

‘I know a lot of you that follow me resonate with different parts of my life that I’ve been through. The journey of losing my baby has to be at the top of the list when it comes to my pain.

‘I just wanted to write this post, not to tell you the story of my sorrow – because we all know the outcome. She isn’t with us…’

Determined to stay positive she continued: ‘BUT I’m writing this post to show you all that you NEED HOPE in life. Without hope there is nothing. Each day spent at that hospital I had hope that she would make another day and one of those would be taking her home. 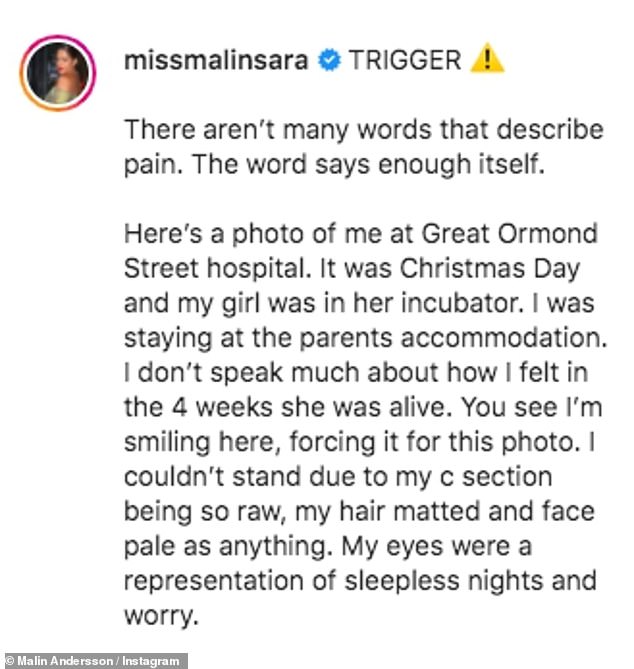 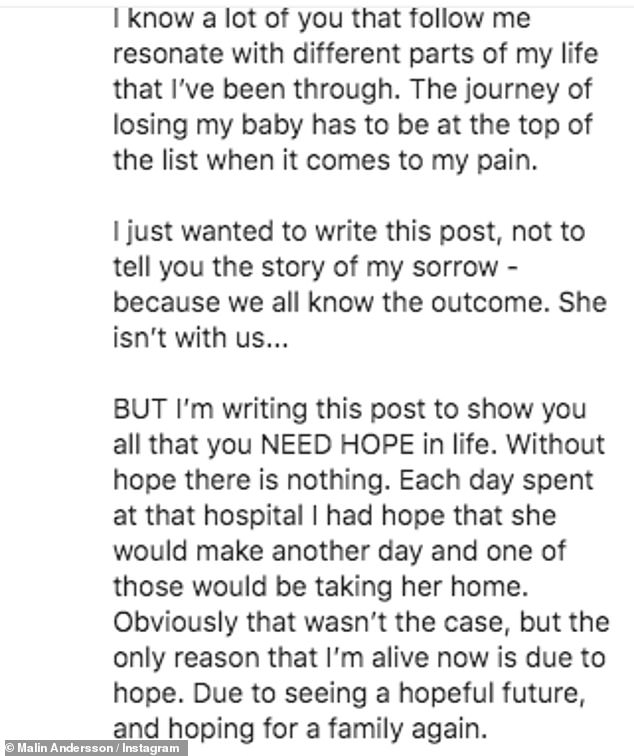 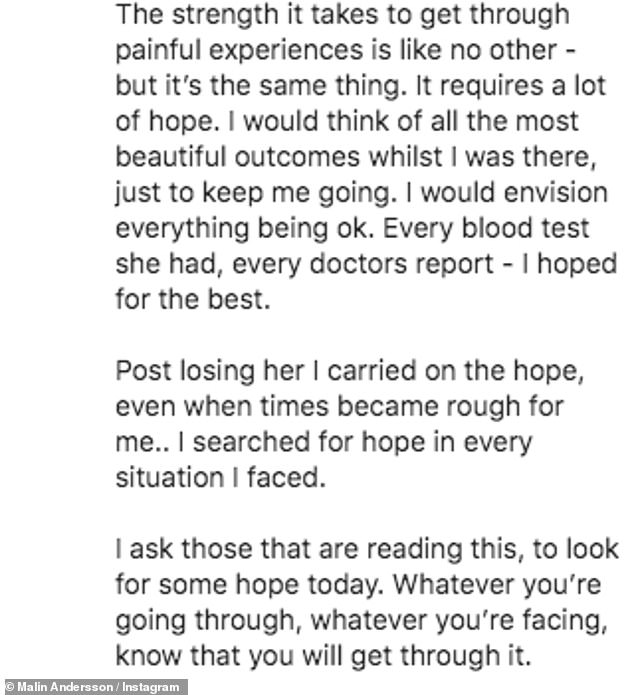 Heartbreaking: In the lengthy caption, an emotional Malin penned: ‘There aren’t many words that describe pain. The word says enough itself’

‘Obviously that wasn’t the case, but the only reason that I’m alive now is due to hope. Due to seeing a hopeful future, and hoping for a family again.

‘The strength it takes to get through painful experiences is like no other – but it’s the same thing. It requires a lot of hope. I would think of all the most beautiful outcomes whilst I was there, just to keep me going. I would envision everything being ok. Every blood test she had, every doctors report – I hoped for the best.’

Signing off the realty star wrote: ‘Post losing her I carried on the hope, even when times became rough for me.. I searched for hope in every situation I faced. I ask those that are reading this, to look for some hope today. Whatever you’re going through, whatever you’re facing, know that you will get through it. Just have a little hope. Ma x’

Her daughter Consy, who she named after her late mother, was born two months premature and Malin spent 23 hours a day by her side in hospital.

However just four weeks later little Consy died and Malin recalled not getting out of bed again for three weeks.

She at the time said she felt angry and questioned: ‘How is this happening to me? Why me?’ I didn’t think it would happen to me again. This isn’t how life is meant to be.’ 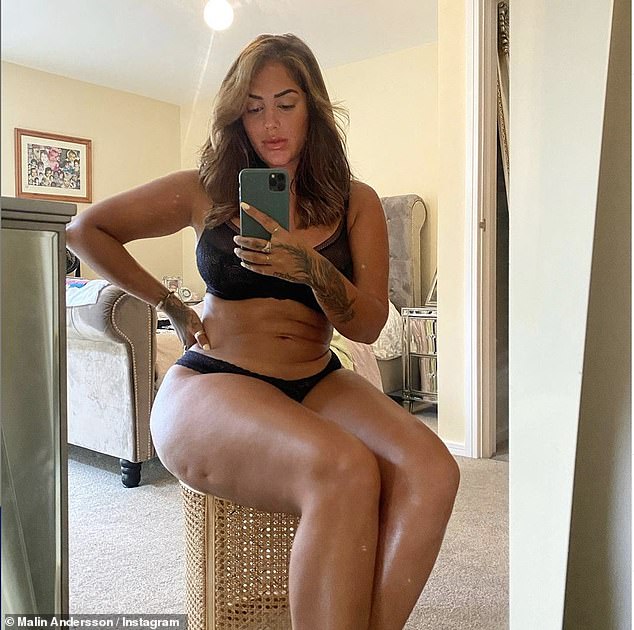 Inspirational: Malin often shares her mental health struggles with her fans on Instagram as well as campaigning for body confidence

In May this year Malin took to Instagram to admit that she has been struggling to manage her grief after losing her baby, mother and father.

The reality star said she has been ‘pushing herself to do tasks that she didn’t want to do’ in order to help others but needs to focus on helping herself.

She shared a picture of her hand entwined in her late mother, Consy’s hand who passed away two years ago from cancer. She also lost her father to skin cancer 26 years ago.

For support with child bereavement, contact The Lullaby Trust charity on 0808 802 6868 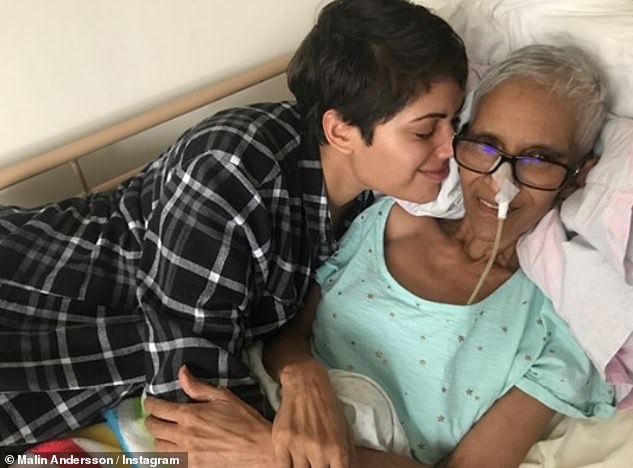 Chocolate Samosa Inside Pav Is The Latest Viral Food Combo. Would You Try It? 0

Jim Daly: Coronavirus pandemic continues on, but faith can still get us through 0