LABOUR voters in the party’s heartlands are revolting against Jeremy Corbyn’s dithering stance on Brexit – which could help Boris Johnson keep the keys to Number 10.

The Tories are now on course to win around 30 seats in the North and the Midlands on December 12 thanks to a swing against their main rivals since the last election two years ago.

That may see the Tories win key seats including Bishop Auckland, Great Grimsby, Stoke-on-Trent North and Workington -all in areas which voted to leave the EU.

The news is revealed in a Survation poll – commissioned by the Daily Mail – carried out after Mr Corbyn unveiled his controversial £83 billion manifesto.

Pollsters discovered nearly four in ten traditional Labour voters would be more likely to vote for the party if they ditched Mr Corbyn.

And around one in four Labour voters asked – 23 per cent – reportedly said they preferred Mr Johnson’s Brexit policy.

The Tories are currently 13 points ahead in Great Grimsby, held by the socialists for more than 70 years.

Labour’s support has dived by 18 points since 2017 to 31 per cent, with many voters appearing to have switched to the Brexit Party, which is now on 17 per cent.

However, the biggest Labour-Tory swing is in the North West, including Manchester and Liverpool, where Labour had a 19-point lead over the Conservatives in 2017.

That has now been cut to just two points, reveals the poll.

Meanwhile the Conservative Party’s advantage over Labour in the East Midlands has risen from ten points in 2017 to 18 points.

And, over the same period, Boris Johnson’s party has also cut dramatically Labour’s lead in Yorkshire and The Humber region.

Damian Lyons Lowe, of Survation, said: “The figures suggest that even with the Brexit Party contesting Labour-held seats, Labour is vulnerable in places it has held for decades.

“The effect of the disproportionate fall in Labour support in this poll will vary from seat to seat.

“However, the Tories will be confident of winning all target seats in the North and Midlands where they need a five per cent swing, many of those where up to a 10 per cent swing is required, and possibly others too.” 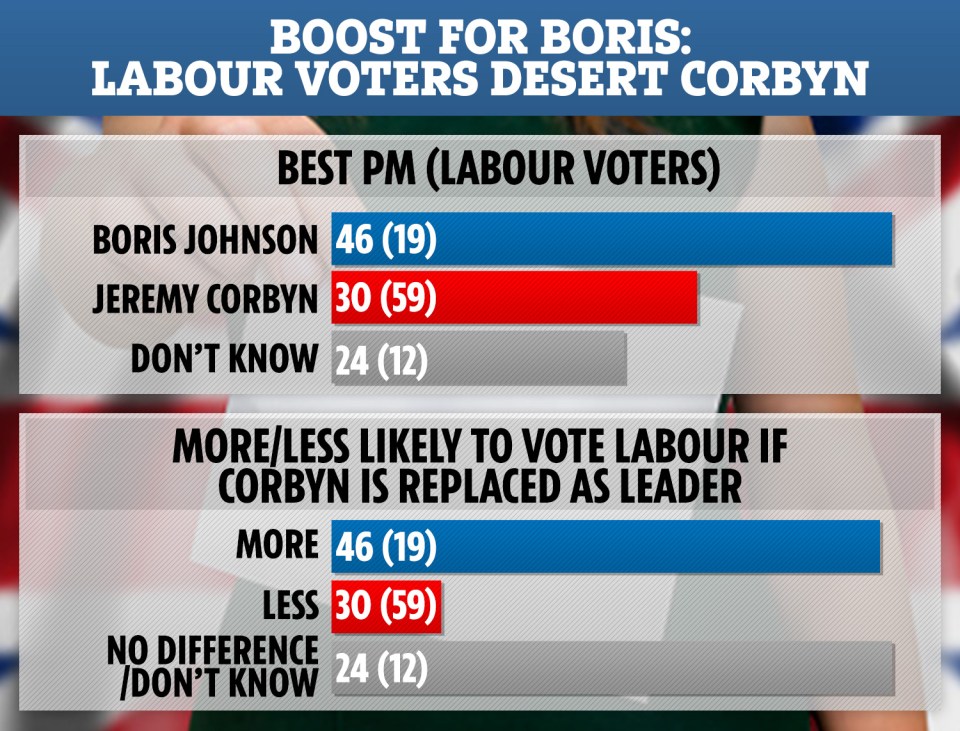 The news comes after pollsters told how Nigel Farage could keep Mr Johnson in Downing Street by pulling key votes away from Labour.

The Brexit Party supremo revealed he would stand down in 317 areas where the Tories won in 2017, to avoid splitting the vote completely for Leave and allowing Labour to get through.

But he refused to go further and step down his candidates in Labour areas as he continues to take the fight to Mr Corbyn ahead of the December 12 general election.

Now, a new stunning poll suggests Labour’s Melanie Onn will lose her Great Grimsby seat to the Conservatives despite a 2,565 majority.

The Labour vote is down 18 per cent according to a Survation poll for the Economist in an area which voted 71 per cent for Leave in 2016, reports The Mail.

And a nationwide poll by Ipsos Mori today showed Boris Johnson’s party has a 16-point lead over Labour with three weeks to go to the election.

Support for the Conservatives stood at 44 per cent, up three points from last week’s poll, and that Labour was up four points at 28 per cent.

It came as Mr Corbyn launched Labour’s general election manifesto in Birmingham as his fantasy spending plans were slammed as “not credible” by an economics expert.

The Labour boss plans to pay for his Marxist vision of 1970s-style re-nationalisation by raising £82.9bn with a series of 12 tax hikes.

But Paul Johnson, director of independent think-tank the Institute for Fiscal Studies, said it was “simply not credible” for Labour to raise the sum by slapping a tough tax on businesses and Britain’s highest earners.

He told ITV: “You cannot raise that kind of money in our tax system without affecting individuals.”

He said: “It’s impossible to overstate just how extraordinary this manifesto in terms of the sheer scale of money being spent and raised through the tax system”.

“Hundreds of billions of additional spending on investment, £80 billion plus per year on spending on day-to-day things; social security, spending on the NHS, students loans and so on.

“Matched by, supposedly, an £80 billion increase in tax. These are vast numbers – enormous, colossal, in the context of anything we’ve seen ever really.”

Mr Corbyn has also slapped businesses with a corporation tax hike of 26 per cent, with wealthy Brits earning more than £125k and £80k also having their pockets hit.

The leftie-leader plans to enforce a new second homes tax, a transaction tax on bankers, reversing inheritance tax cuts and imposing VAT on private schools to pay for his radical regime.

To try and win the green vote, Mr Corbyn pledged to enforce a windfall tax on oil companies to those who have “knowingly damaged our climate will help cover the costs”.


The Lib Dems reveal they would let 169,000 citizens of Hong Kong move to UK


How old is Nicola Sturgeon? First Minister of Scotland & leader of the SNP


General Election polls tracker and odds – who will win in 2019?

HAVE YOUR VOICE HEARD


Where is my polling station?

STILL ON THE FENCE

It also emerged that households face shelling out an extra £216 a year in taxes to cover the cost of Labour’s plans to freeze state pension age at 66.

According to financial provider AJ Bell, it could see the government forking out an extra £6bn a year to meet the increased cost of more people taking their state pension.

And this cost could be passed on to the UK’s 27.8million households.

Shrewsbury vs Liverpool betting tips: Shrews to force a shock replay and under 2.5 goals at the Meadow – FA Cup bets

MANCHESTER UNITED showed there is actually some character within their squad as they banished fears of an embarrassing FA Cup humbling within 45...

Her plea comes as the Alzheimer’s Society demanded the Chancellor’s Budget in March allocates an extra £8billion for adult social care. Ruth became an...

FA CUP fourth round weekend hasn’t disappointed. We’re now well into a packed schedule and it was Oxford United who pulled off the biggest...

MANCHESTER UNITED fans were left rubbing their eyes in disbelief after witnessing goals from Jesse Lingard AND Phil Jones against Tranmere Rovers. The first...

Brad Pitt and Jennifer Aniston SHOULD get back together, say one fifth of Brits

ONE in five Brits hope Brad Pitt will reunite with his first wife Jennifer Aniston after their marriage ended 15 years ago. Despite the...