Madonna and her ex-husband Guy Ritchie seemed to have put their rocky past behind them as they enjoyed a reunion at an art gallery in London earlier this month.

The pop icon, 61, arrived at the event with her toyboy Ahlamalik Williams, 25, and adopted children Mercy and David, both 14, while the film director, 51, showed up with his wife Jacqui Ainsley, 38, and son Rocco, 19.

The former couple have rarely been seen together since their eight-year marriage came to an end in late 2008, but the pair have managed to continue to co-parent their two children, Rocco and David. 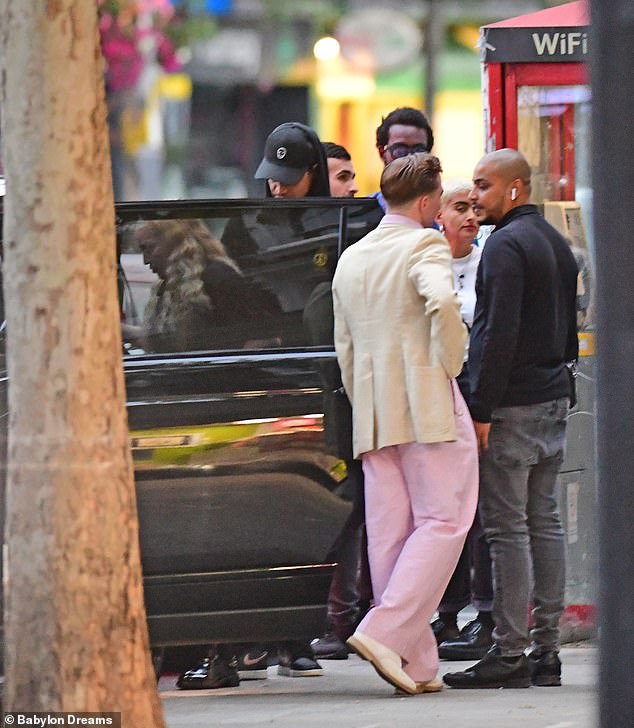 In good company: Madonna and her ex Guy Ritchie enjoyed a reunion at an art gallery in London earlier this month (pictured with toyboy Ahlamalik Williams, 25, and son Rocco, 19)

The family visited the Tanya Baxter Gallery in Chelsea for an exhibition by young artist Rhed who is a new favourite among the wealthy art elite.

An onlooker claimed to The Daily Mail that writer Ritchie looked ‘strained’ when the Like A Prayer hitmaker arrived.

It’s not known if they exchanged pleasantries but if they did, it would have been a short catch-up as she left after half an hour.

Following their split, the award-winning songstress was reportedly required to pay a settlement between £60 million and £73 million, which included giving up her £12 million country mansion in Wiltshire. 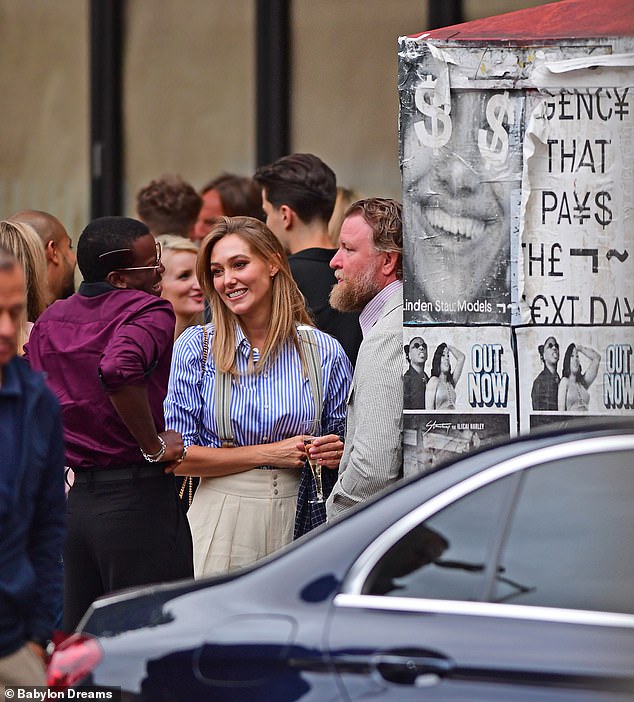 Cheery: The film director, 51, (pictured catching up with his adopted son David Banda, 14) showed up to the event with his wife Jacqui Ainsley, 38, and son Rocco 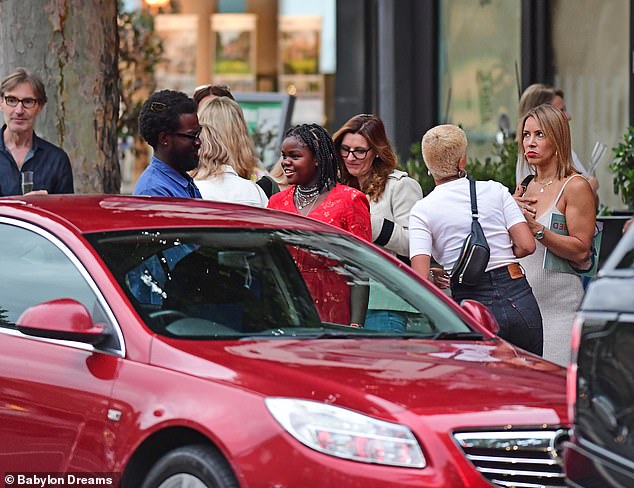 Family affair: The pop icon, 61, arrived at the event with dancer Ahlamalik and adopted kids David and Mercy (pictured centre) and David, both 14 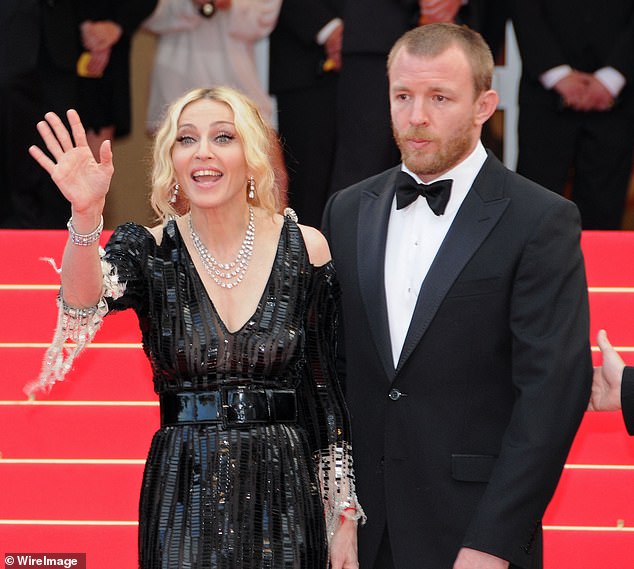 Break-up: The former couple have rarely been seen together since their eight-year marriage came to an end in late 2008 (pictured in May 2008)

The artist previously branded him ’emotionally retarded’ and Sherlock Holmes director Guy revealed he was gripped with pain and worried he would slip into depression during the years when their relationship began to fall apart.

The Mirror reported at the time: ‘He told a friend: ”I’m afraid the laughs in our life together were long gone.”

‘He said to friends all he wanted was an ordinary family life, but Madonna preferred the trappings of a celebrity lifestyle, scuppering the idea they could ever live as a normal couple.

”’It’s silly, she’s a pop star. And some of the advisers around her, some of whom have gone, made it impossible for us to have a semblance of a normal life.”‘

The producer has been in a relationship with model Jacqui since 2010, with the couple tying the knot in their country estate in July 2015. They share three children: Rafael, eight, Rivka, seven, and Levi, six.

Despite appearing to have buried the hatchet by attending the same event, Madonna and Guy had a mystery legal blow up right before Christmas.

DailyMail.com revealed the TV and film star Ritchie a motion in their divorce case asking for the ‘enforcement or execution of a judgment or order’.

The timing of the motion – which was filed on December 23 – suggested that there could be a disagreement over where some of Madonna’s six children should be spending Christmas.

They previously waged a bitter and public custody battle over Rocco in courts in London and New York.

That ended in 2016 with their eldest son being allowed to live in the UK with his father, a director whose films include Lock, Stock and Two Smoking Barrels.

The Like A Prayer hitmaker has a total of six kids; Lourdes Leon, 23, with ex Carlos Leon, Rocco and David with Guy, as well as her other adopted kids Mercy and twins Estere and Stella, seven.

In 2006, the artist adopted David from the Home of Hope in Malawi as he was battled pneumonia and malaria at the time. 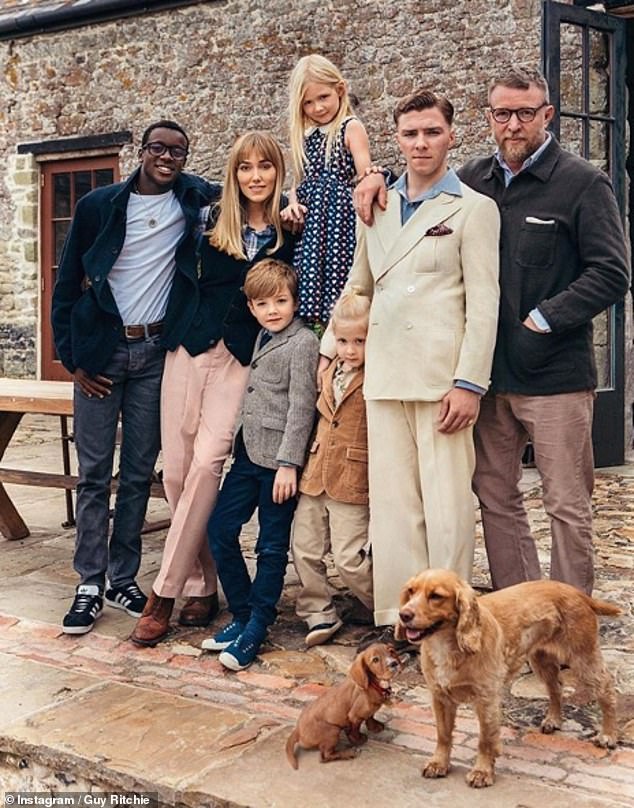 Close: The producer has been in a relationship with model Jacqui for 10 years, and the couple share three children: Rafael, eight, Rivka, seven, and Levi, six (pictured together in 2019)

The award-winning songwriter previously admitted she struggled with the criticism she faced when adopting the little boy she was trying to save.

In an interview with PEOPLE, she said: ‘In my mind, I was thinking, “Wait a minute. I’m trying to save somebody’s life. Why are you all s****ing on me right now?’ I did everything by the book.’

David is a keen footballer and in August 2017, Madonna moved to Lisbon after David joined the Benfica football team youth academy.

Madonna adopted Mercy three years later, before choosing to legally care for twins Estere and and Stella in 2017.

After her marriage to Guy broke down, the blonde has been linked to many men, including Portuguese model Kevin Sampaio, Dutch choreographer Timor Steffens, and French dancer Brahim Zaibat. 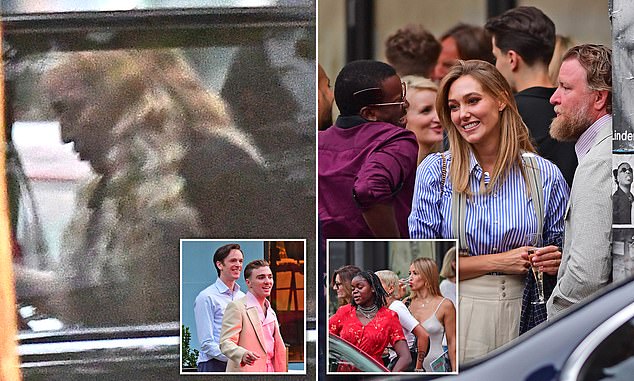 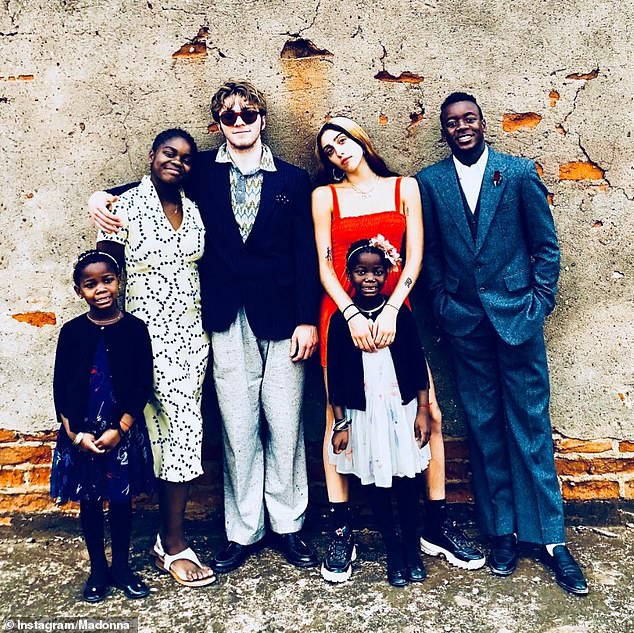 Strong bond: Madonna shared a rare photo of all six of her children spending Thanksgiving in Malawi back in 2018, including Lourdes, 23, and twins Estere and Stella, seven

Glenn Close, 73, shares behind the scene snap from her dressing room on the set of Stepford Wives 0

Portland man, 18, charged with assaulting US marshal during courthouse protest 0