Love Island's Maura Higgins has admitted that seeing her ex Curtis Pritchard move on with dancer Amber Pierson was a 'kick in the teeth'.The realit


Love Island’s Maura Higgins has admitted that seeing her ex Curtis Pritchard move on with dancer Amber Pierson was a ‘kick in the teeth’.

The reality star, 29, split from the professional dancer, 24, in March just eight months after leaving the Love Island villa when speculation surfaced that he was getting overly friendly with Amber, 21.

And now the Dancing on Ice alum claimed that her last two boyfriends had both cheated on her, having previously spoken about her ex before Curtis being unfaithful. 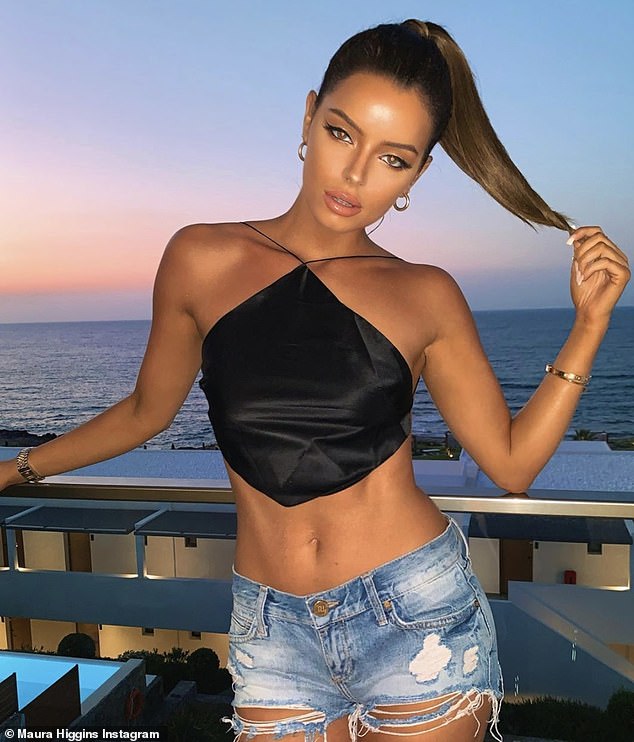 Speaking to The Sun’s Fabulous, she said: ‘Everything happens for a reason and, to be honest, I wish him all the best.

‘I’m in a good place now. It’s not nice to see, but I’m fine. It’s kind of a kick in the teeth that I’ve been cheated on by my last two boyfriends, but I will be stronger for this.’

The Irish beauty explained that their relationship began to crumble hours after her first performance on Dancing on Ice when Curtis was pictured in a clinch with a girl at a New Year’s party.

Reflecting on that time, she wished she had tackled the allegations head-on but was so focused on her first skate that she ‘didn’t want to make it an issue’. 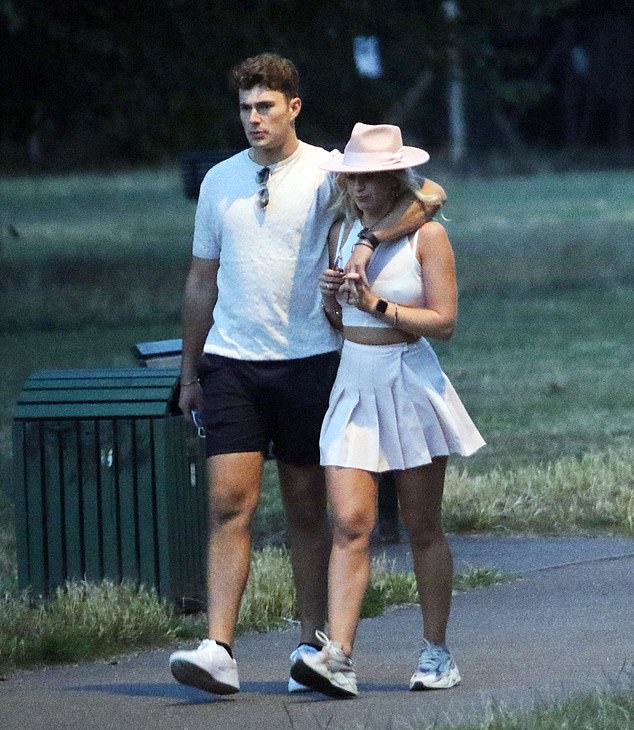 New romance: Curtis has been pictured getting cosy with blonde dancer Amber in recent weeks 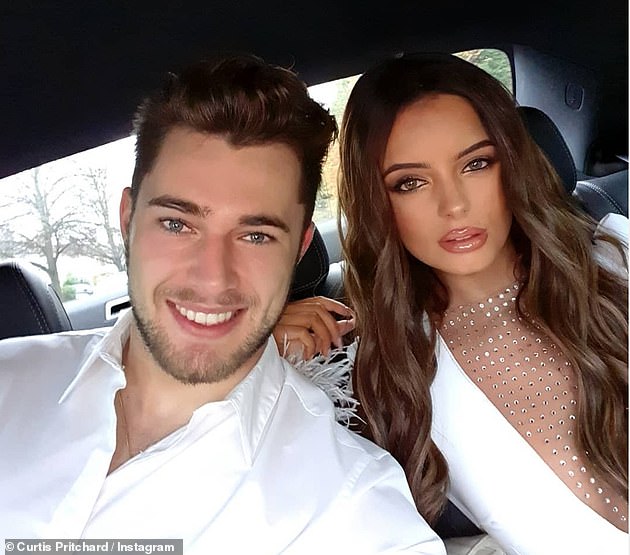 In the past: The reality star, 29, split from the professional dancer, 24, in March just eight months after leaving the Love Island villa (Pictured before their split)

She added: ‘I tried to brush it aside and maybe it was the worst thing that I could have done. If I hadn’t, I probably wouldn’t have performed my first live show as well as I did but, looking back, in my gut I knew that there was something.’

Maura’s comments come after Curtis was pictured putting on a very cosy display with Amber, who he previously denied cheating on Maura with, earlier this month.

The Love Island star and dancer walked arm-in-arm and stopped to share a kiss as the enjoyed an evening stroll.

After the images were revealed, a source close to Curtis’ ex told MailOnline that it was a ‘massive kick in the teeth’.

At the time of their split, friends of the former couple insisted that Curtis did not cheat on Maura with Amber. 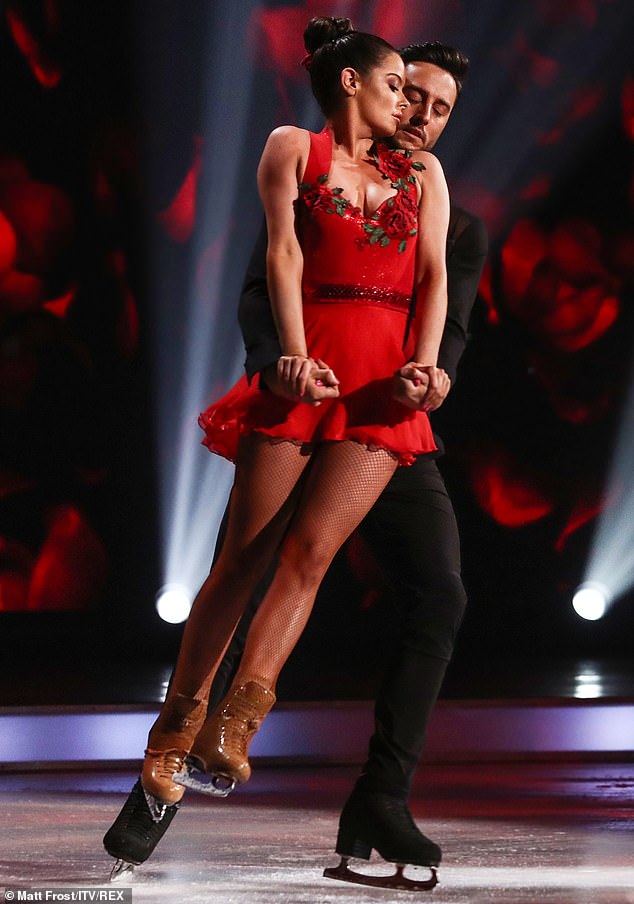 Rumours: Previously a source said the cheating claims are a ‘smear campaign’ by Maura to ‘divert’ from rumours about her relationship with her Dancing On Ice partner Alexander Demetriou

A source close to Curtis and Maura told MailOnline the cheating claims are a ‘smear campaign’ by Maura to serve as a ‘diversion’ from rumours that circulated about her relationship with her Dancing On Ice partner Alexander Demetriou.

At the time, the insider said: ‘The claims earlier this year that Curtis was with Amber whilst still with Maura were simply a tactical diversion by her to take the heat off the rumours circulating about the close relationship she had with her dance partner Alex’.

Alexander and his wife Carlotta Edwards split earlier this year, with Alex admitting she grew ‘jealous’ of his close bond with Maura, saying he ‘didn’t want to lead her on’ anymore.

A friend of Curtis and Maura insisted that there was ‘no overlap’ between him seeing Amber and the reports that Maura and Alex had grown close during their time on the show. 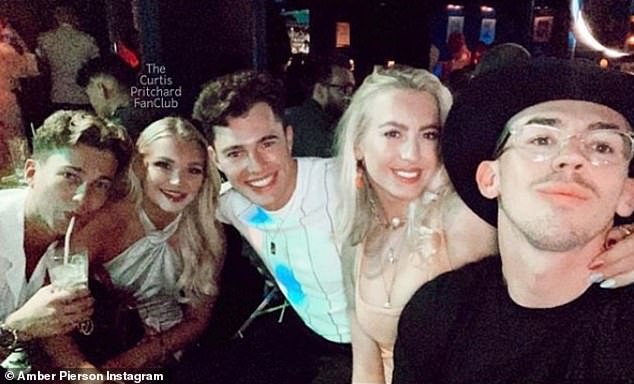 Taking to Instagram at the time, she wrote: ‘I didn’t want to speak out about this, but I feel I have to as I have been receiving a few abusive messages recently regarding what’s been in the papers.

‘To be very clear, Curtis and I have never been together. We are simply friends and dancer partners! There are 13 dancers going on tour, and I am one of them. The ‘cheating’ allegations this week are out of the blue and complete lies.

‘I wanted no part in this but what I will say is Curtis is genuinely a lovely and talented guy, who doesn’t deserve any of this. Hope that’s set the record straight and we can move on. Amber x.’

However since her post, the two have gone public with their romance having been pictured kissing and holding hands. 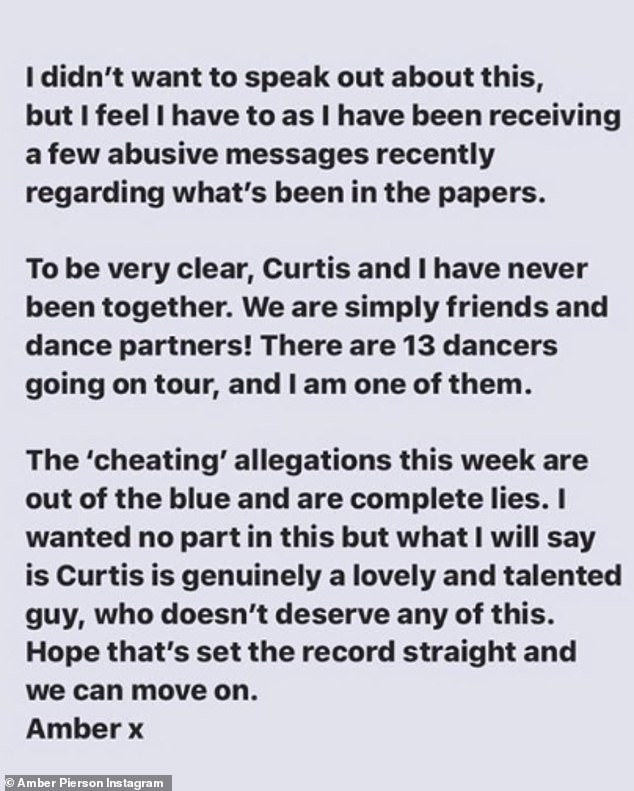 Setting the record straight! Back in March, Amber dismissed claims she’d had a fling with the Love Island hunk behind his ex Maura’s back as ‘complete lies’

Outrage after California bans singing in churches amid coronavirus pandemic 0

Weight loss: Michael Mosley on why sleep could be the key to losing fat 0