She showcased her incredible figure in an array of skimpy bikinis on the 2020 winter series of Love Island.

And Demi Jones turned heads as she displayed her hourglass physique in a pale gold dress as she headed out for dinner with friends in London on Saturday evening.

The reality starlet, 22, looked glamorous in the busty pencil dress as she strutted to Mayfair restaurant, Coya, for a night of fine-dining with pals. 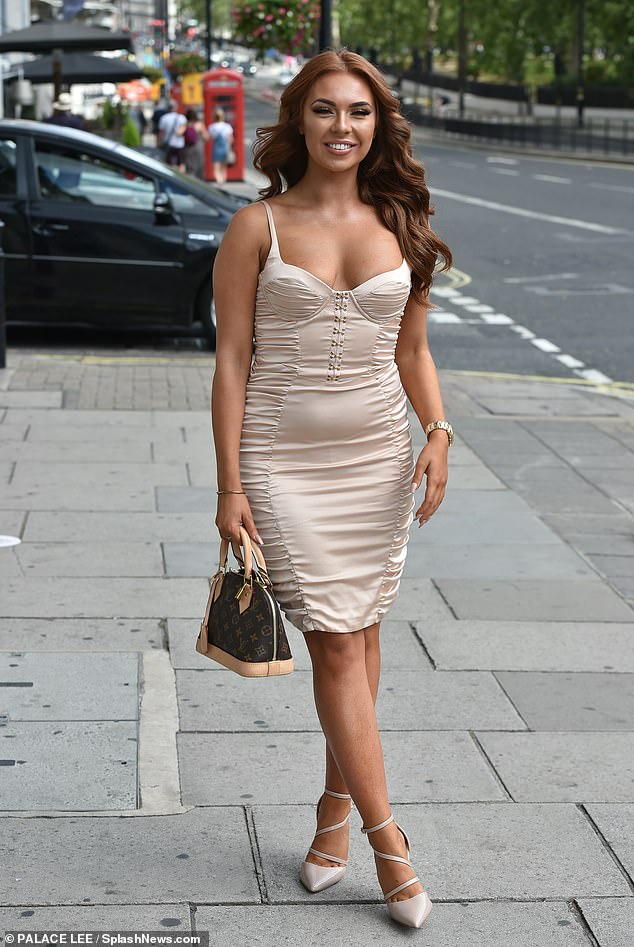 Stunning: Demi Jones turned heads as she displayed her hourglass physique in a pale gold dress as she headed out for dinner with friends in London on Saturday evening

The figure-hugging dress featured hook and eye corset-inspired detailing on the front which enhanced her ample cleavage.

Demi opted for a pair of nude pointed heels that complemented her ensemble. 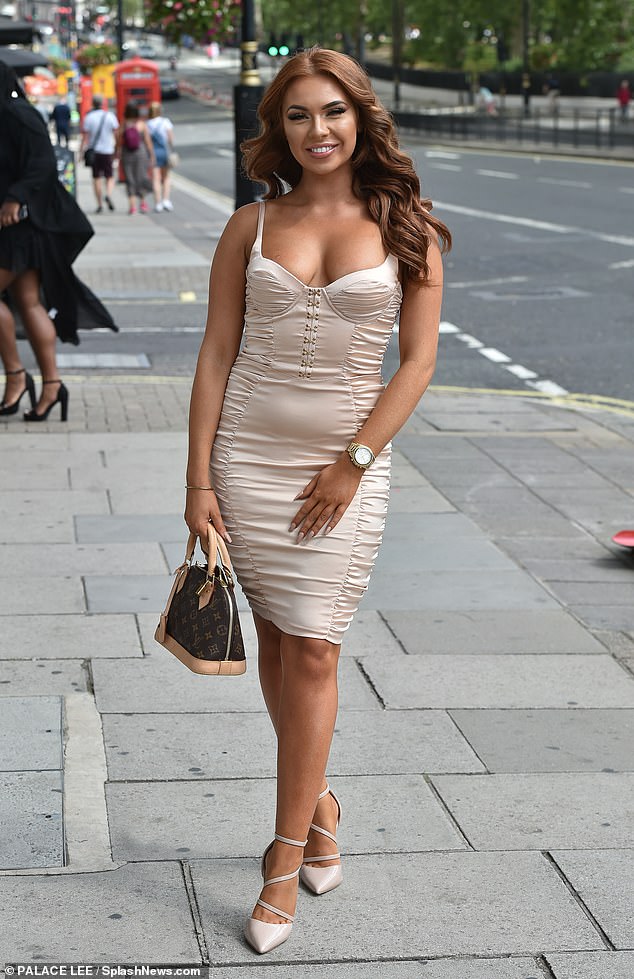 Hourglass: The Love Island beauty, 22, displayed her ample cleavage and pert derrière in her corset-inspired dress that featured hook and eye detailing on the front 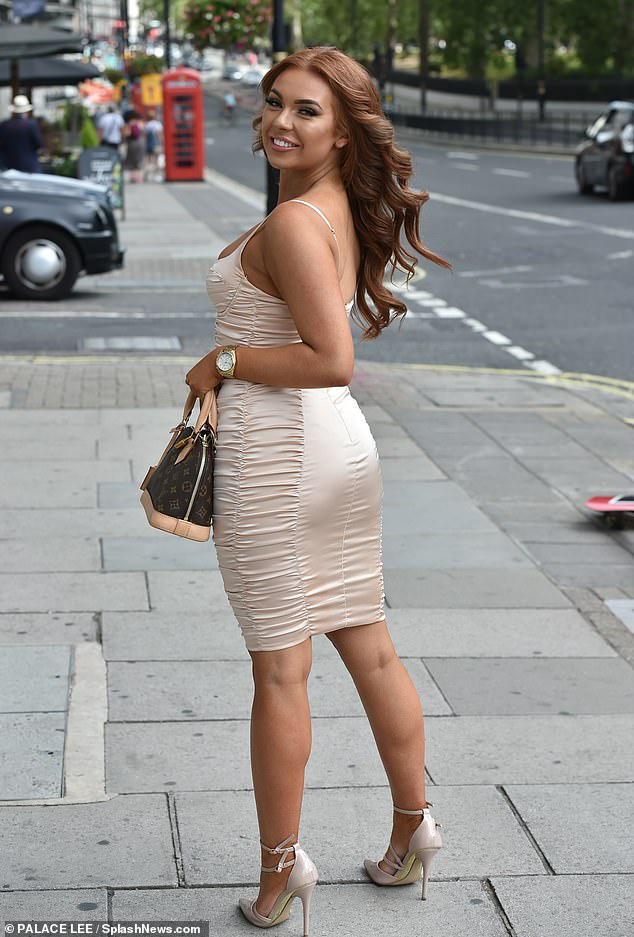 Designer touch: Demi took her outfit up a notch as she held her Louis Vutton handbag in one hand and she also wore a pair of muted pale pink heels that complimented her outfit choice

The reality starlet accessorised with a classic Louis Vuitton handbag and parted her auburn tresses in the middle for a glamorous wavy do.

She opted for a full makeup look which highlighted her incredibly bronzed complexion.

Demi has been happily single since splitting with Luke Mabbott.

Back in June, Demi broke her silence on her split from Luke, four months after they finished in third place on the first-ever winter edition of Love Island.

In an exclusive interview with MailOnline, the reality star confirmed the pair officially called it quits in May, a decision she claims was encouraged by the heating engineer, 25.

The TV personality admitted that while ‘there’s no bad blood’ between the former couple, she doesn’t believe they’ll rekindle their romance in the future. 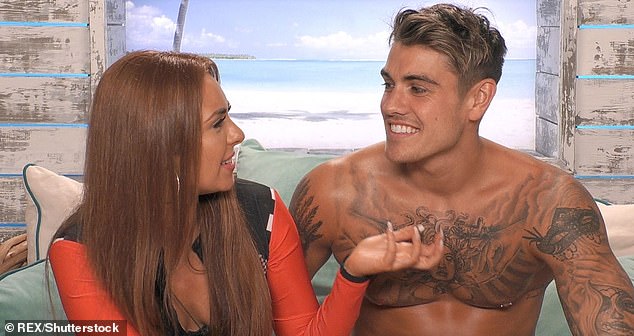 Breakup: Demi made it to the Love Island final with her Justin Bieber-lookalike Luke Mabbott but the pair officially separated in May after the lockdown put a wedge between them

In January, the auburn beauty entered the Cape Town villa as a bombshell, initially embarking on a romance with Nas Majeed.

But once the hopefuls were put to the test with a trip to Casa Amor, Demi was left heartbroken when she discovered her love interest returned with Eva Zapico.

To her surprise, sparks eventually flew with Justin Bieber-lookalike Luke, and the pair went on to land a place in the final. 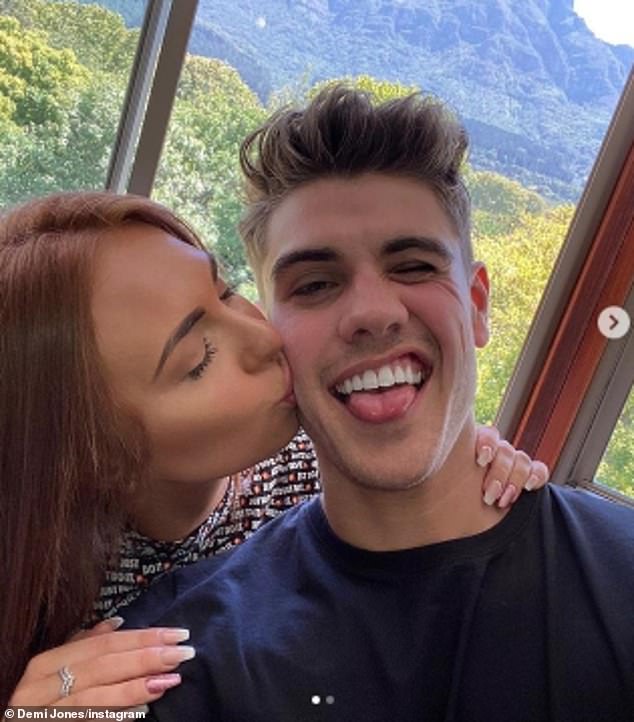 Demi said: ‘With lockdown, it drove us apart and we live so far away from each other. I feel like there wasn’t a lot of effort made with communication, so we drifted as a result. It’s a shame’

Speaking about their split for the first time, the TV star told us: ‘We’ve completely called it off now, I think it was brought about more from his behalf than mine, but we’re mutual and friendly.

‘With lockdown, it drove us apart and we live so far away from each other. I feel like there wasn’t a lot of effort made with communication, so we drifted as a result. It’s a shame and bad timing.’

Admitting she was left disappointed as Luke opted against making them official, the influencer elaborated: ‘I had my hopes that he’d ask me once we came out of Love Island but it never really happened. As lockdown went on, little effort was made so it was called off.’

Luke has since moved on and is now in a relationship with Love Island 2019 contestant Lucie Donlan. 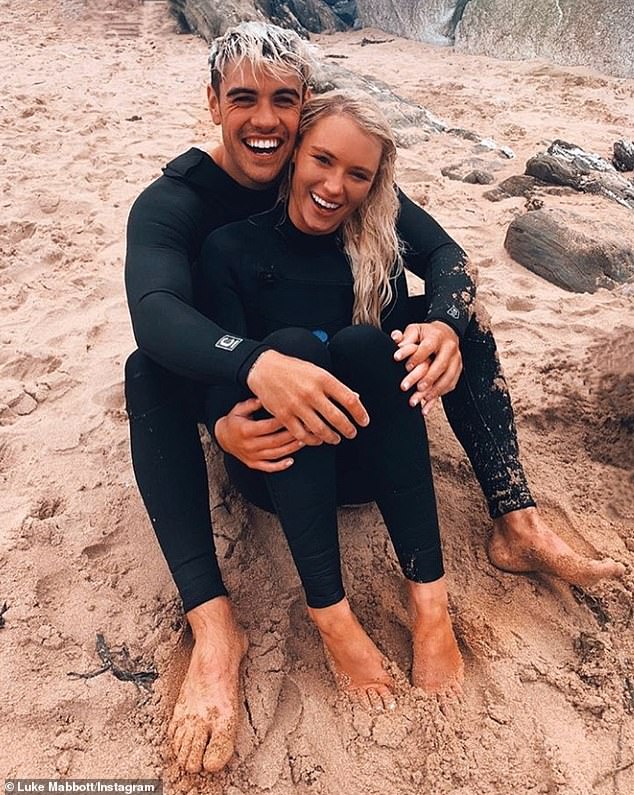 New romance: Her ex-boyfriend has since moved on and has begun dating 2019 Love Island contestant and surfer chick Lucie Donlan

High cholesterol: Major warning sign levels are too high found in a sensation in the legs 0