Home News London Bridge heroes ‘pinned terrorist down and kicked him in the head’...

HEROIC passersby have told how they pinned the London Bridge terrorist down and kicked him in the head after a brave group fought back with a 5ft porpoise tusk.

Fearless tour guide Thomas Gray was one of the brave pedestrians who risked his own life in Friday’s savage attack which left two people dead.

Mr Gray was driving northbound over the bridge with his friend Stevie Hurst when they saw people running in panic and jumped out to help.

He told the MailOnline: “There were three big blokes grappling with another man and had him on the floor.

“I asked what was going on and someone said the man on the ground had just stabbed two women.

“I saw that he had two kitchen knives with blades about 8-inches long. One in each hand. One of the knives appeared to be attached to his hand by duct tape.

“I stamped as hard as I could on his other wrist to make him let go of the knife and as he released it someone else kicked it away.

“He was saying “get off me” but we told him “no f***ing way is that happening”. The police were on the scene very quickly. The knifeman appeared to reach for something in bag and the police warned us to move away saying he had a gun.

“Whether or not he did or whether the police were just trying to get us to move away, I don’t know. I saw the police shoot him three or four times and then heard a dull thud.”

Armed officers surrounded the attacker and shot him dead at 2.03pm, just five minutes after the attack unfolded.

The terrorist has been named as 28-year-old Usman Khan, who was convicted in 2012 for terrorism offences and released from prison in December 2018 on licence.

A woman and a man died in the attack. Three others – a man and two women – were also injured and remain in hospital.

I saw that he had two kitchen knives with blades about 8-inches long. One in each hand. One of the knives appeared to be attached to his hand by duct tape. I stamped as hard as I could on his other wrist to make him let go of the knife and as he released it someone else kicked it away.

Khan, who was living in the Staffordshire area, was attending a prison rehabilitation event at Fishmongers’ Hall when he launched his attack before rushing out on to London Bridge.

He is also believed to have been wearing a tag when he went on his bloodthirsty mission in the heart of London.

Dozens of people, including University of Cambridge students, inmates and academics, were attending the Learning Together event when a tall, bearded man burst in through the doors of the Grade II listed building wielding two blades.
Whitehall sources said the man had been convicted of an “Islamist terrorism-related offence”.
An unnamed hero was seen ripping off a 5ft narwhal tusk from the wall and joining the brave group tackling the terrorist to the ground.

Another passer-by was hailed as a hero after trying to save a woman’s life after he helped disarm the terrorist.

It later emerged that James Ford, 42, is a convicted murderer out on day release who murdered a disabled 21-year-old woman.

The Met Police have confirmed they are treating the incident as a terrorist attack.

Neil Basu, the assistant commissioner, said in a statement that they received reports the suspect “may have had an explosive device” on him, but it was later determined to be “hoax device”.

Police are still searching the area and the cordon will remain in place for some time.

A lorry has been left jacknifed across the bridge as hundreds of panicked civilians ran for their lives.

The attack comes 15 months after the capital was gripped by terror when a man ploughed into cyclists outside the Houses of Parliament in August, 2018 – and two years on from the London Bridge terror attack that killed eight in 2017.

Speaking outside New Scotland Yard, he said: “I want to thank the brave emergency services who responded to today’s horrific attack.

“Every day they put their lives on the line for us, running towards danger to keep us safe.

“I would also like to thank members of the public who risked their own safety this afternoon. They are the best of us.”

One witness applauded the “amazing bravery” of the man who disarmed the terrorist.

He tweeted: “He ran through traffic and jumped the central partition to tackle the attacker with several others. We ran away but looks like he disarmed him. Amazing bravery.”

‘I HID TO PROTECT MY BABY’

A mum also told the BBC how she shielded her one-year-old baby from the terrorist when he was shot.

Karen Bosch said: “The first thing I saw was people starting run into the road and at first I thought it was just annoying London pedestrians, but they looked scared and they were looking over their shoulder and they were filming.

“It looked like there was a tussle or a fight. There were maybe a few men together all with dark jackets and in the end I realised they were three armed police officers.

“Then I saw one guy in a big black jacket and a beard and then the next thing I saw was him lying on the floor.

She added she heard “two loud pops and also saw a spent taser, and then the guy was lying on the floor.

“He then pulled his coat back which showed he had some sort of vest underneath… The police then moved backwards away quickly.

“I thought if he explodes will my baby be okay. So I tried to go behind the stairwell so she was protected.”

A police cordon was still in place on the north side of London Bridge at of 7pm this evening. 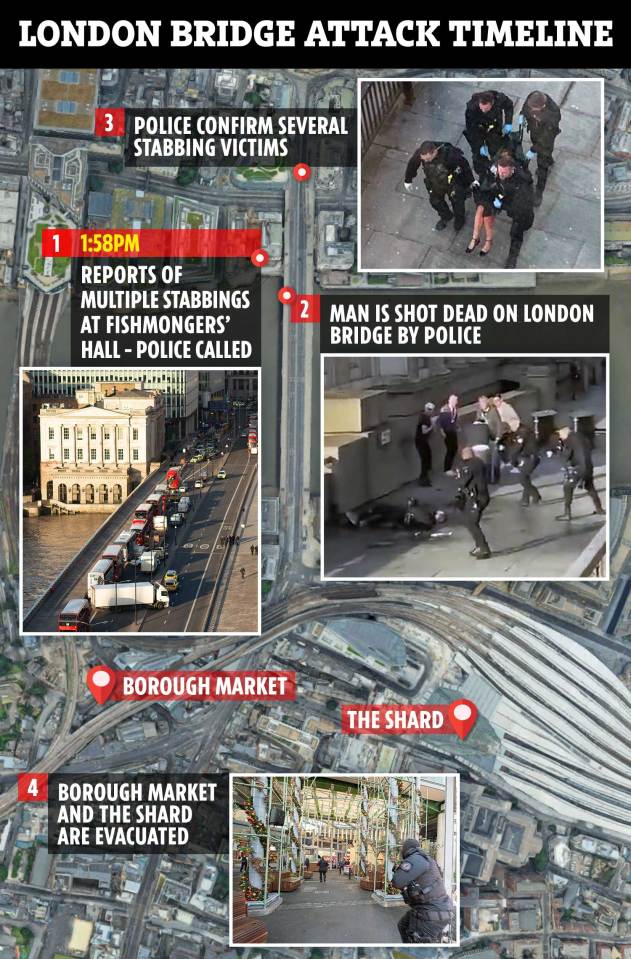 CHAOS ON THE STREET

A witness said she saw a girl running from the scene after being stabbed in the arm.

Coralie said she saw “two, three people stabbed” at Fishmongers’ Hall, saying: “One minor and the other two were proper bleeding. One of our colleagues is in the hospital with three stabs.”

Ambulance crews could be seen giving CPR to one person at the scene.

She said: “I was just on a bus coming from the 21 bus and all of a sudden it stopped.

“And there was a commotion and I looked over the window and I saw three police officers running over to a man who had something in his hand, I don’t know what.

“I saw a police officer shoot him.”

Three terrorists killed eight people and injured 48 as they sped over London Bridge in a van before attacking revellers with hunting knives in June 2017.

The gang, armed with 12-inch blades and knifing innocent bystanders at random, were shot dead after firearms officers arrived at the scene around nine minutes after the rampage began.

One attacker was just 60cm away from an armed officer when he was shot dead. Both PCs Tchorzewski and Balfour were later awarded the Queen’s Police Medal.

Brave onlookers fought back against the terrorists – launching chairs and bottles as business owners pulled down their shutters to protect customers inside.

Another witness claimed she heard two gun shots before running as far away from the scene as possible.

Reem Yousef told Sky News: “I was below the bridge about 30m to one side of it.

“I heard shouting and I looked up and it appeared to be about four or five people in a fight.

“Then I heard someone shouting to get past, which was very difficult because police cars were flooding the scene and people were running obviously away from the scene

“People running down Gray’s Church street. I heard sirens very quickly after the gunshots so I think the emergency response was fairly quick

“And from my perspective I was running away from the scene

“What was going through my mind was just ‘run’. I didn’t know what direction the gunshots were going to be coming from

“So I was just trying to flee the scene and get as far away as I could.”

David Winchester, 57, who is visiting London from the US said he heard around five gunshots on London Bridge before running from the scene.

He said: “I heard five, maybe six shots, and then the screaming.

“I have no idea what it was about but everyone was screaming to run.

“There were people in tears. It was bad. You know when you just have to get out of somewhere.”

The Archbishop of Canterbury tweeted this evening: “The sorrow and shock is heartbreaking for those caught up by the London Bridge attack and for the bereaved.

“The police and ambulance crews are wonderful. May Christ comfort them, and may our nation be given resilience, protecting the weak, strong in facing threats.”

Both Conservatives and Labour have tonight confirmed they have suspended their election campaigns in the wake of today’s attack.

He said: “I want to thank the emergency services and members of the public for their immense bravery in responding to this suspected terrorist attack at London Bridge.


Brit girl, 10, savaged by two dolphins as they 'dragged' her under the water


Heart-stopping new film of heroic struggle to bring down terrorist


Gary Rhodes did NOT fall in the shower, reveals friend

“This is an appalling incident and all my thoughts are with the victims and their families.”

Home Secretary Priti Patel tweeted: “Very concerned by ongoing incident at London Bridge. My thoughts are with all affected.

“I am grateful for the rapid response of our police and I urge everyone to follow their advice.”

The statement said: “President Trump has been briefed on this morning’s attack at the London Bridge and is monitoring the situation.

“The United States strongly condemns all horrific acts of violence on innocent people, and we pledge our full support to our ally, the United Kingdom.”

It comes after the UK’s national terrorism threat was downgraded.”

Anyone who may have information that could assist the investigation should call the Anti-Terrorist Hotline on 0800 789 321. In an emergency dial 999.

My statement on the incident at London Bridge. pic.twitter.com/UDL77f4uMK

I want to thank the emergency services and members of the public for their immense bravery in responding to this suspected terrorist attack at London Bridge.

This is an appalling incident and all my thoughts are with the victims and their families.

Murderous rugby star had string of affairs and was texting ‘hundreds’ of women before killing wife, kids and himself

Joe Giudice says ‘moment Teresa said no to sleeping with me, I had to walk away’ after humiliating moment shown on RHONJ

Murderous rugby star had string of affairs and was texting ‘hundreds’ of women before...

A KILLER dad was having a string of affairs and texting “hundreds” of women before he burned his wife and three kids to...

Britt Ekland, 77, was born in Stockholm, Sweden and grew up with three younger brothers. The star left school as a teenager and...

Joe Giudice says ‘moment Teresa said no to sleeping with me, I had to...

JOE Giudice claimed that the moment wife Teresa refused to sleep next to him during her trip to Italy was the moment he...

When can I get a blue passport?

OLD school British passports are set to be issued after the country quits the EU. The UK is ditching its European Union-style burgundy passports...

For every warped & twisted loner who wages war on our...

Murderous rugby star had string of affairs and was texting ‘hundreds’ of women before...

Joe Giudice says ‘moment Teresa said no to sleeping with me, I had to...