Laverne Cox shared previously unseen bikini videos of herself to Instagram on Friday to celebrate the release of her new film Promising Young Woman with Carey Mulligan.

The 48-year-old actress and LGBTQ+ advocate opted to bare her curves, despite sharing that usually these types of videos ‘have been private,’ as she stunned in a black two piece.

Cox was unafraid to proudly display her figure as she told her followers, ‘here ya go.’ 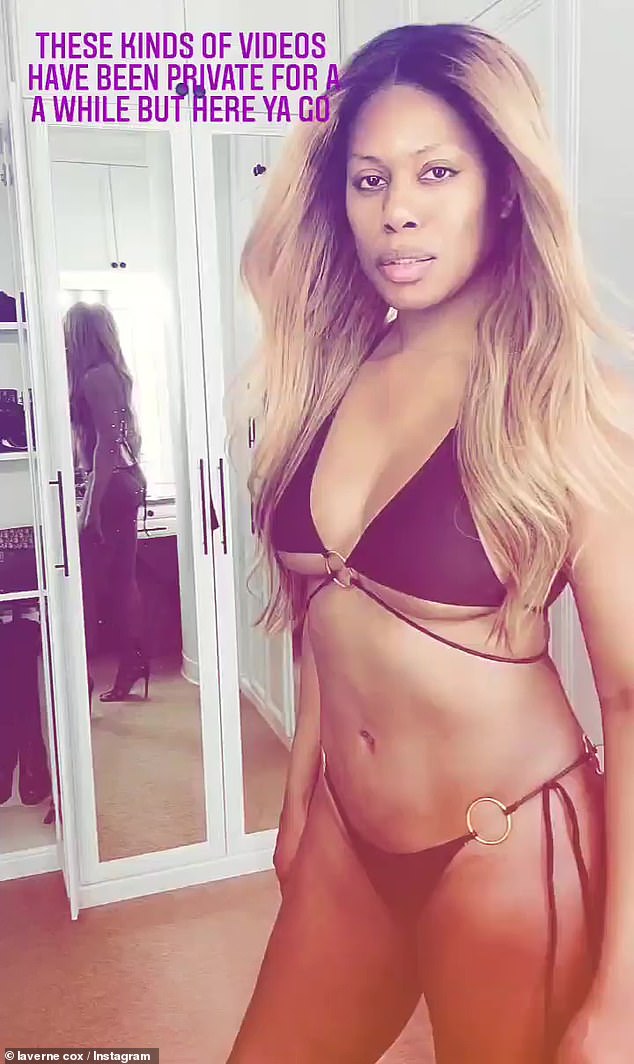 Baring it all: Laverne Cox, 48, looks radiant in a previously ‘private’ video as she bares her curves in a stringy black bikini to celebrate the release of new film Promising Young Woman

Standing in her bedroom, she showed off her incredible body in the stringy black bikini with gold rings on the hips and bust.

She elongated her stature in a pair of black heels that could be seen in the mirror, as she posed makeup free.

Her golden tresses down, she worked her facial angles in the smoldering video. 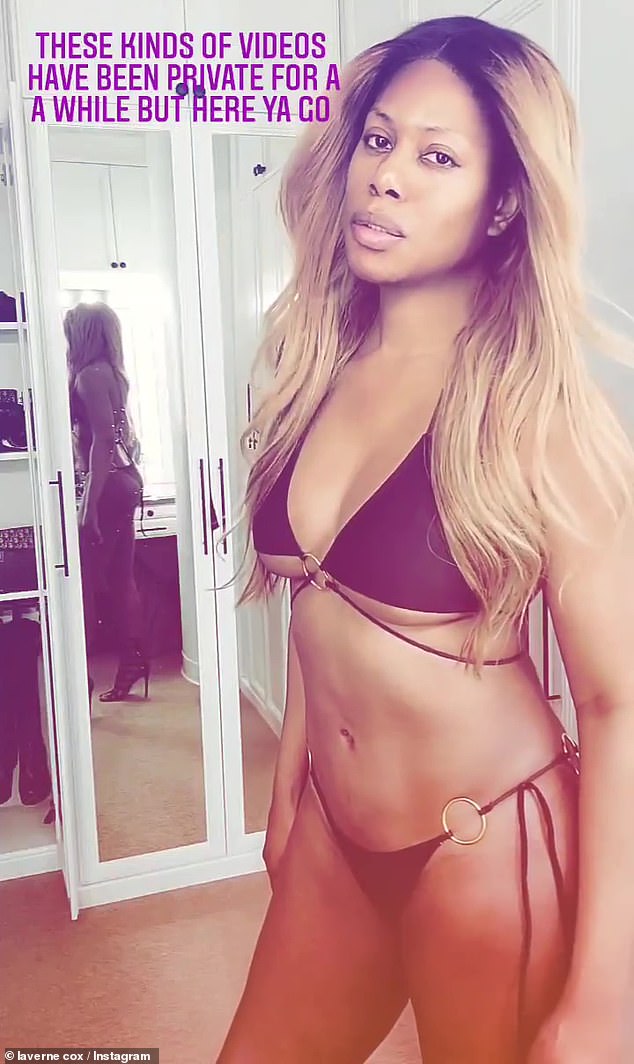 Baring it all: The proud Trans actress wrote, ‘These kinds of videos have been private for a while but here ya go’ 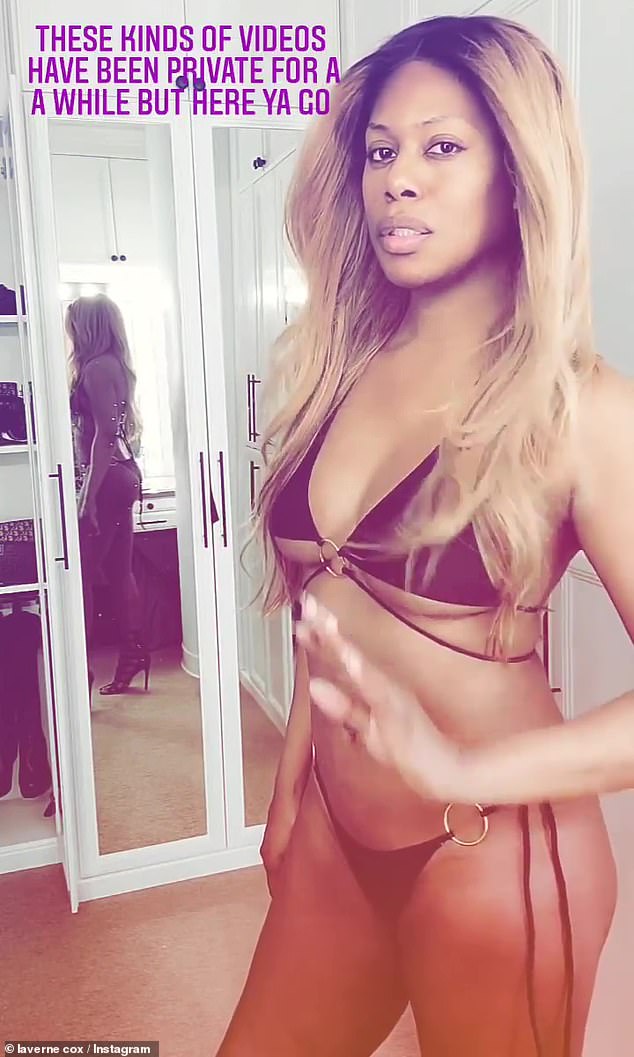 Work it: The black string bikini was adorned with gold rings on the bust and hips as she posed in her bedroom while wearing a pair of black heels

The Orange Is the New Black star wrote, ‘These kinds of videos have been private for a while but here ya go.’

She continued to post the videos to her Instagram grid after storying them as she added, ‘I figured I’d share. @promisingyoungwoman is now on Demand. Right now! Watch it!,’ while adding her signature hashtag ‘#TransIsBeautiful.’

The videos received many comments from fans calling her a goddess and good pal Tracee Ellis Ross simply wrote, ‘gorgeous.’

Goddess behavior: Fans were quick to comment that she was a Goddess and Ellis Ross wrote, ‘gorgeous’

A multi-faceted actress who recently executive produced the Netflix documentary,  Disclosure, about Hollywood’s depiction of the trans community, Cox released an op-ed on Monday about the importance of making the film.

Speaking about her tough upbringing in Alabama, she shared the bullying she endured and revealed she contemplated suicide at the age of 11 before she moved to New York City and met real trans people.

‘The disparity between the trans people I knew and how we were portrayed on screen inspired me to look critically at images in the media. I longed for a film about trans representation.’ 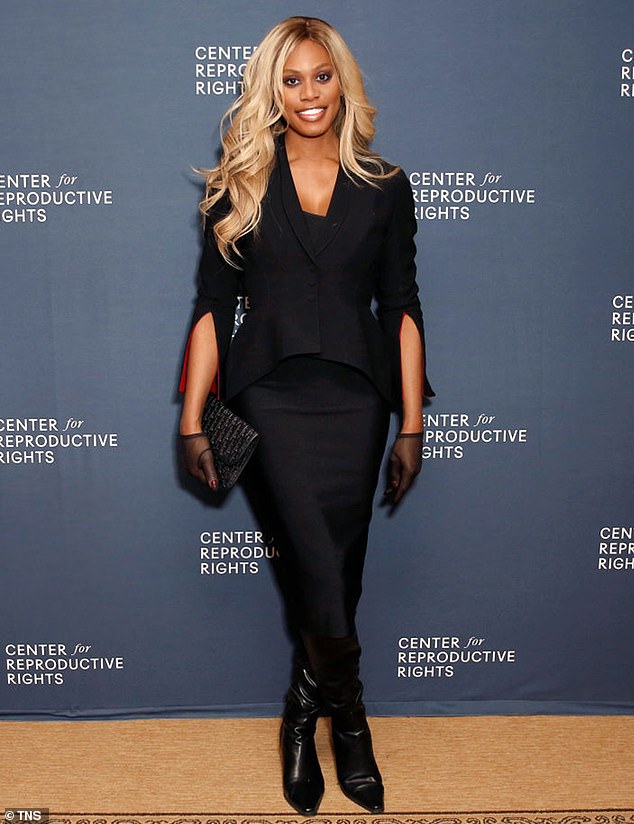 Disclosure: ‘The disparity between the trans people I knew and how we were portrayed on screen inspired me to look critically at images in the media,’ she shared in the Shondaland piece; pictured February 2020

She signed on to the project in 2017 and made it a point to hire trans crewmembers to make a safe space for the all-trans cast who were interviewed, fostering an ‘environment of comfort and trust which inspired them to share very personal experiences.’

Continuing to spread her wings on other types of projects, the Emmy nominated actress recently landed a podcasting series through Shonda Rhimes’ Shondaland Audio and iHeartRadio.

With a current working title of The Laverne Cox Show, which is set to debut in February 2021, Cox will conduct guest interviews that ‘provoke thought and potentially new outlooks.’

‘I can’t wait for everyone to hear the incredibly interesting conversations I have had with my guests,’ she shared. 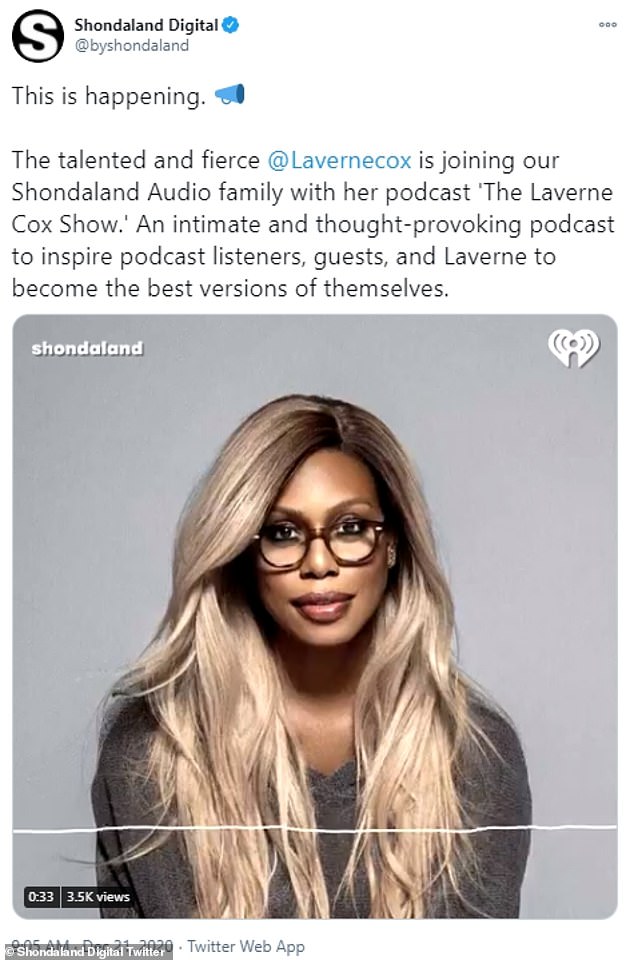 Shondaland: Cox teamed up with Shondaland Audio and iHeartRadio to produce a podcast series set to debut in February 2021, where she will conduct interviews that ‘provoke thought and potentially new outlooks’