Lunching with the Hemsworths! Brothers Chris, Liam and Luke join partners and father for bite to eat
Horsefly bite: How to tell if you've been bitten – what do horsefly bites look like?
Lyme disease: Feeling this sensation in your head could mean an infection by a tick bite

They were first linked last New Year’s Eve and went Instagram official with their relationship in February after the Super Bowl.

And Lady Gaga cut a laid back figure as she grabbed a bite to eat with her boyfriend Michael Polansky in Malibu on Saturday.

The singer, 34, donned an oversized grey crew neck jumper for the outing and a pair of tiny red and white shorts. 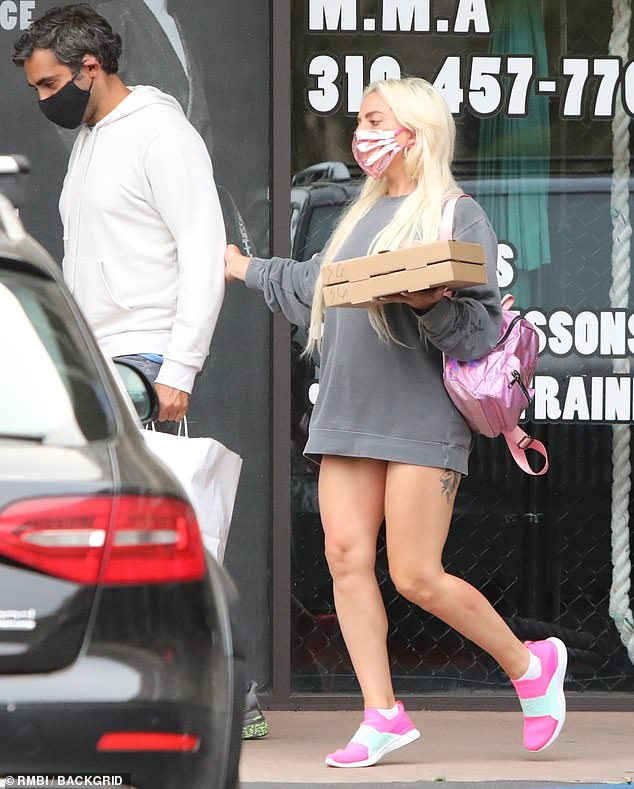 Out and about: Lady Gaga, 34, cut a laid back figure as she grabbed a bite to eat with her boyfriend Michael Polansky, 42, in Malibu on Saturday

The Stupid Love hitmaker put safety first as she sported a pink face mask amid the ongoing coronavirus pandemic, pairing it with a matching bag.

Letting her platinum locks fall loose down her shoulders, Gaga completed her look with a pair of pink and white trainers.

Gaga lovingly put an arm around her boyfriend Michael, 42, as they departed a local restaurant with their takeout meal.

Tech CEO Michael also kept it casual for the day, wearing a white hoodie with a pair of grey jeans and a black face mask. 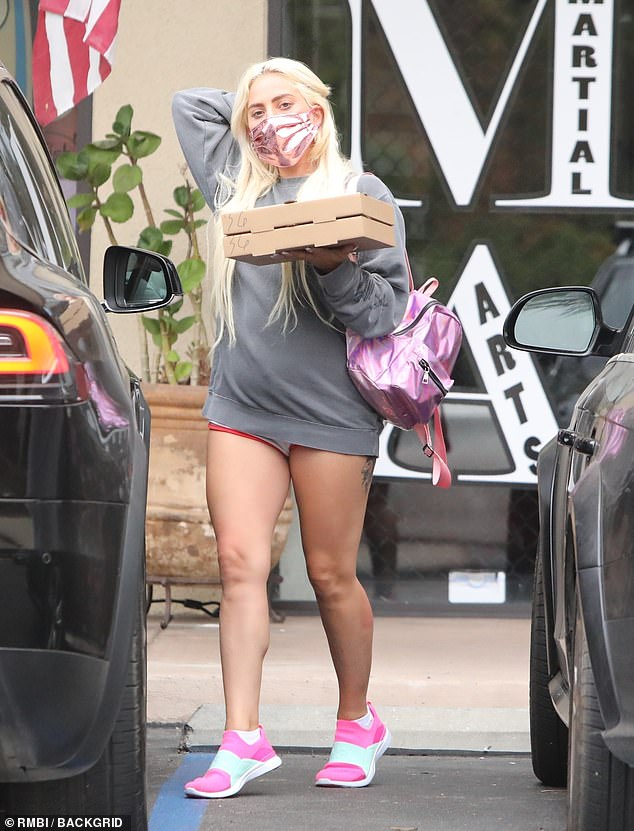 Outfit: The singer donned an oversized grey crew neck jumper for the outing and a pair of tiny red and white shorts

The outing comes after Gaga confirmed she has postponed her Chromatica Ball tour, in support of her sixth studio album, one whole year to summer 2021.

Gaga is taking no chances with the coronavirus and hopes to bypass the pandemic by pushing back the six-date tour so far out.

The Oscar winner took to Instagram and Twitter Friday morning to break the news, including a pink-haired Chromatica visual alongside text listing the new dates and locations for the six-show mini tour across Europe and North America.

‘The Chromatica Ball is officially moving to Summer 2021!’ read the caption. 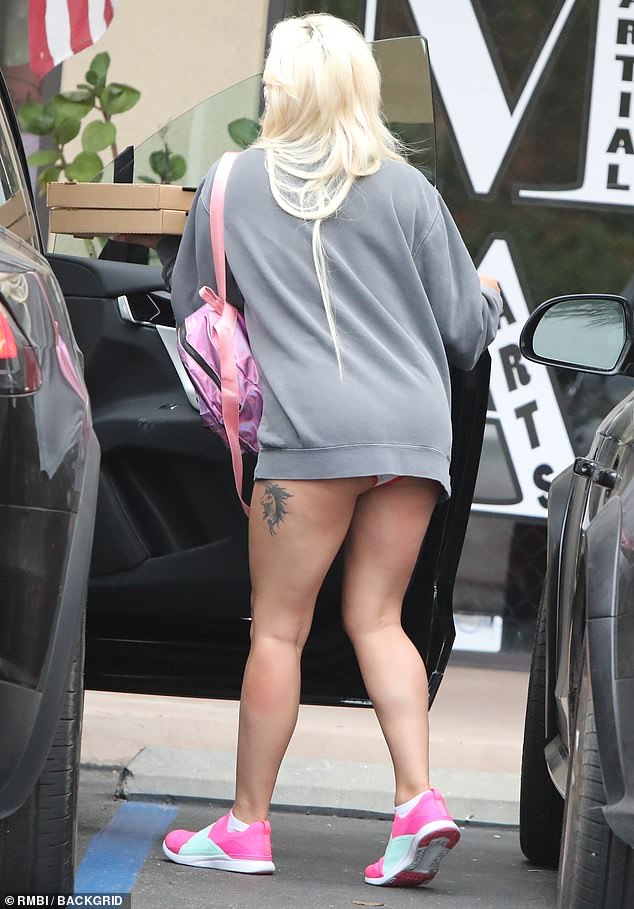 Casual: Letting her platinum locks fall loose down her shoulders, Gaga completed her look with a pair of pink and white trainers

‘We’ve been working hard to figure out the safest and soonest way to bring this show to you, but most importantly want everyone to be healthy and able to dance together at the shows as we always have,’ Lady G continued.

‘If you’ve purchased a ticket already, you’ll find all of the new information in your email inbox. I can’t wait to see you there!

‘Keep dancing at home in the meantime,’ she concluded, adding a kiss emoji.

The Chromatica Ball was initially supposed to launch July 24th of this year in Paris, and is now scheduled to commence July 25th of next year in the French capital. 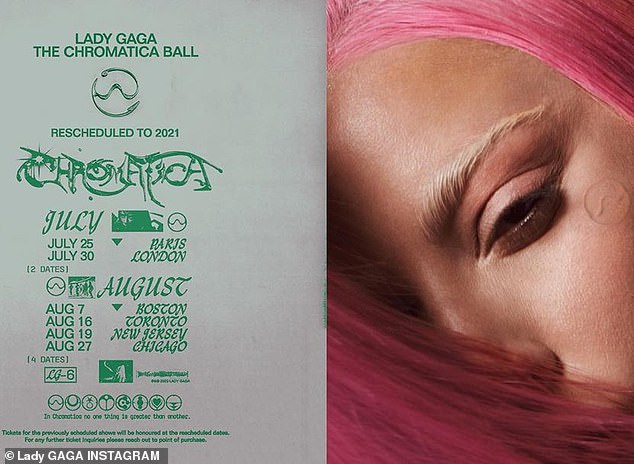 Good things come to those who wait: Lady Gaga’s Chromatica Ball tour in support her sixth studio album has been postponed one whole year, to summer 2021

Following that show, Gaga and her crew will hit up London on July 30, 2021 before coming stateside for shows in Boston, Toronto, New Jersey and Chicago on an almost weekly basis throughout August.

The announcement comes as little surprise, as many artists have made similar moves – Luke Bryan, for example, pushed his Proud To Be Right Here tour from this summer and fall to kick off next spring instead.

Gaga’s decision to delay her shows in Paris and London makes sense especially considering the fact that Americans are currently at risk of being banned from entering Europe altogether in the near future, since this country’s coronavirus rates have been spiking of late as compared to the rest of the world.

The album Chromatica itself was delayed in its release, initially scheduled to drop on April 10.

But with the pandemic peaking at the time, Gaga felt that it was more appropriate to push its release to May 29. 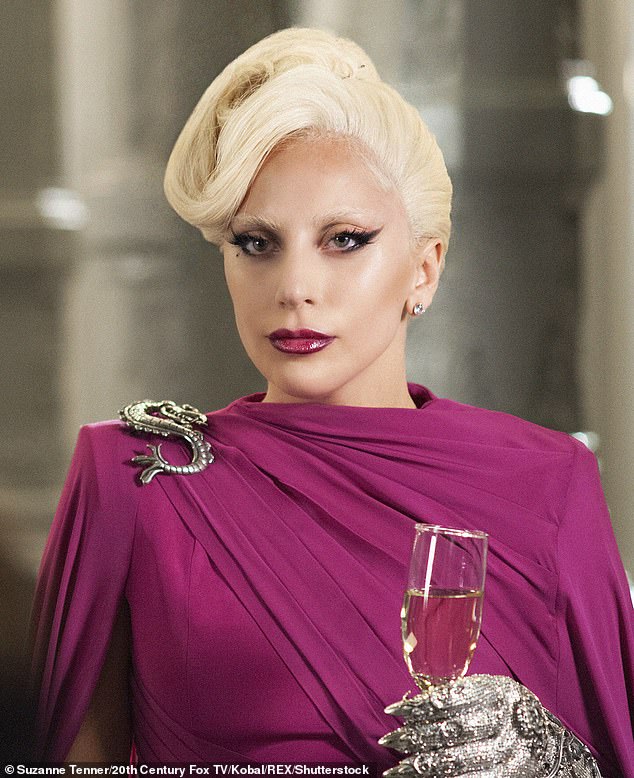 Delay: ‘Most importantly want everyone to be healthy and able to dance together at the shows as we always have,’ Lady Gaga said in the caption to the annoucement; seen here in 2011