Katie Price has received 'devastating' news about her broken feet after paying a visit to a specialist in West London on Wednesday.The reality star


Katie Price has received ‘devastating’ news about her broken feet after paying a visit to a specialist in West London on Wednesday.

The reality star, 42, was pictured being wheeled into the Fortius clinic in West London for a consultation after the freak accident in Turkey, and in an Instagram update revealed she’s ‘gutted’ by the prognosis.

Katie did not elaborate on the state of her feet following a visit to a consultant, but her pals attempted to lift her spirits by later taking her to the Kurobuta restaurant for dinner. 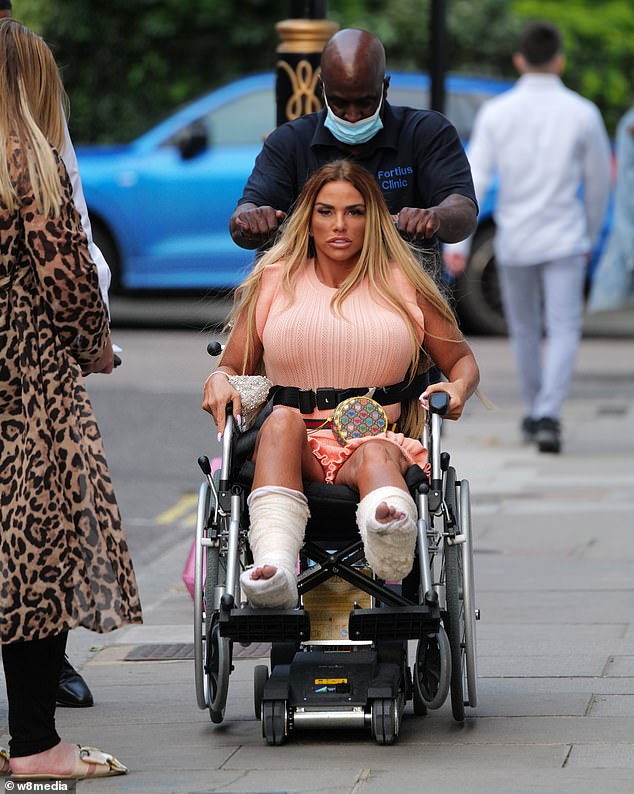 Tragic: Katie Price, 42, has received ‘devastating’ news about her broken feet after paying a visit to a specialist in West London on Wednesday

In the post she shared with fans on Instagram, Katie wrote: ‘Just finished my appointment with my consultant and surgeon about my feet.

‘After further scans, the news is absolutely devastating. I’m gutted.’

The star was seen being wheeled into the doctor’s with the help of clinic staff, before later leaving with new braces to help heal her broken feet. 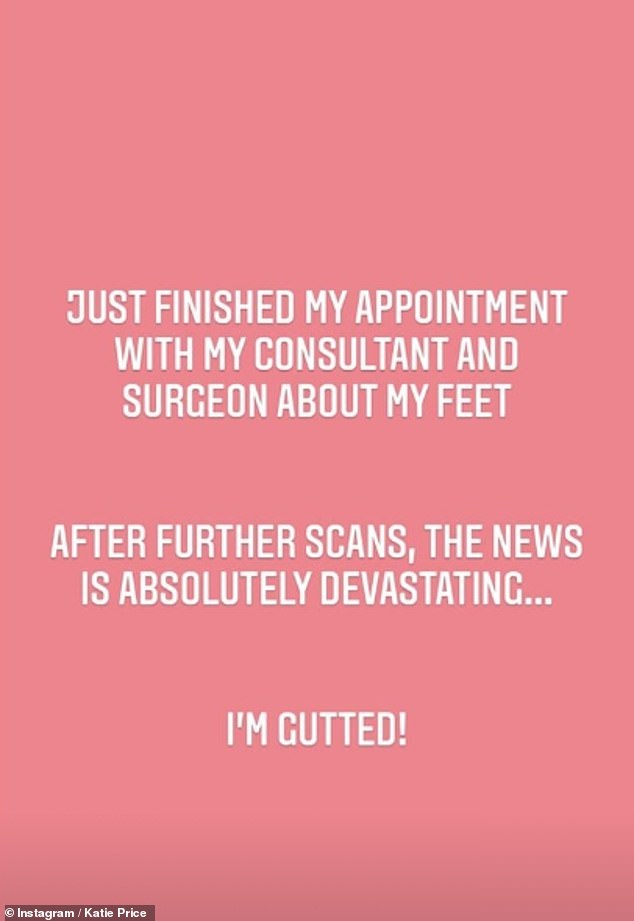 Upsetting: The reality star shared an update with her fans on Instagram, admitting she is ‘gutted’ by her prognosis 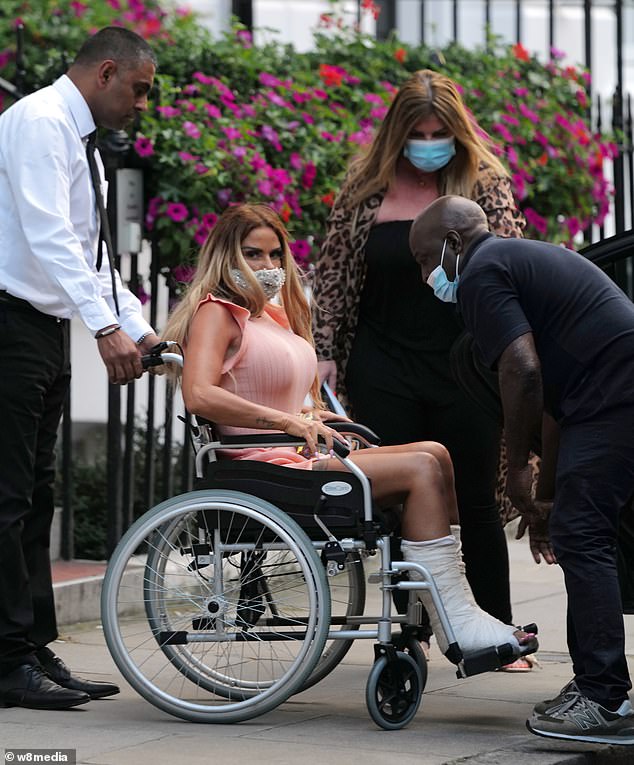 In pain: Katie was pictured being wheeled into the Fortius clinic in West London for a consultation after the freak accident in Turkey 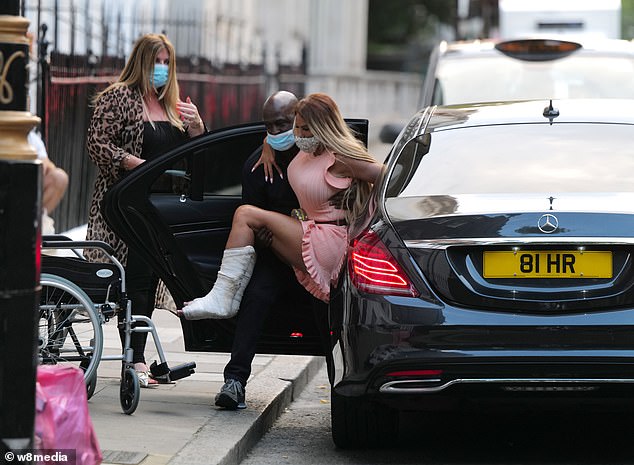 Difficult: She needed the help of clinic staff to be carried into the chair, after returning to the UK from her family holiday on Wednesday 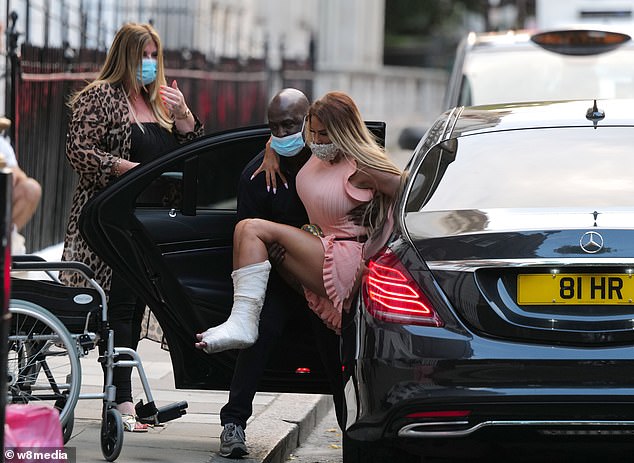 Ouch! Katie still managed to look effortlessly stylish in a coral frilled mini dress as she was carried to the waiting wheelchair 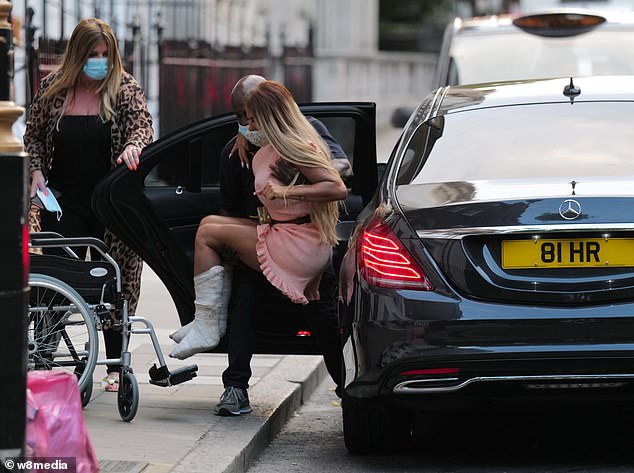 Difficult: The star has been left in agony after breaking both her feet in Turkey, and has been told she won’t be able to walk for three to six months

She still looked effortlessly stylish in a coral mini dress as she spent several hours visiting a specialist before leaving with her new boots.

Clearly disheartened at the slow progress of her recovery, Katie’s pals attempted to cheer her up by heading to out for dinner in a new pink wheelchair.

Katie was rushed to A&E in Turkey last week for emergency surgery after doctors realised the extent of her horrific injuries.

The TV personality had to spend a night in hospital after fracturing both ankles after she jumped off a wall at the holiday theme park, Land Of Legends.

The journey to recovery will be a long road for Katie as she won’t be able to walk for three to six months. 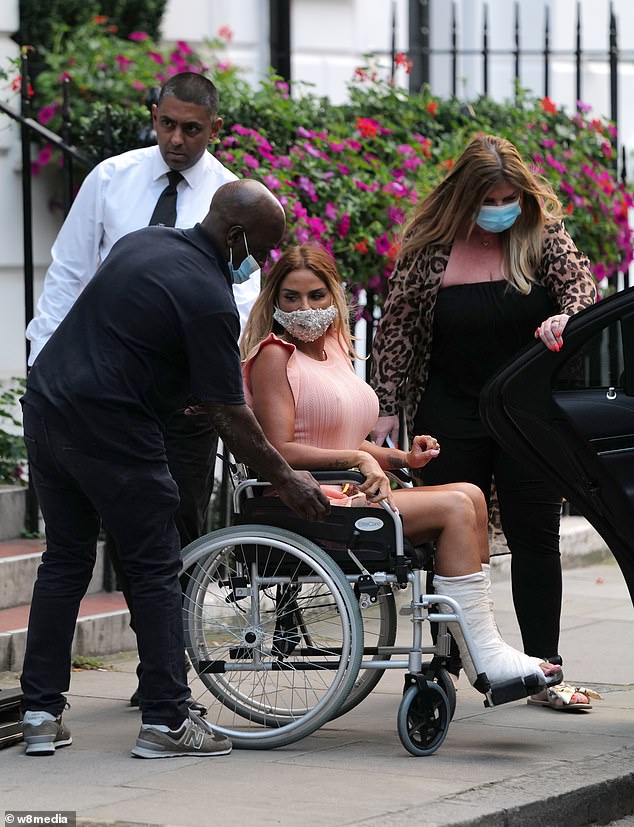 Protection: Both Katie and her entourage ensured they were wearing their protective face masks as she was wheeled into the clinic 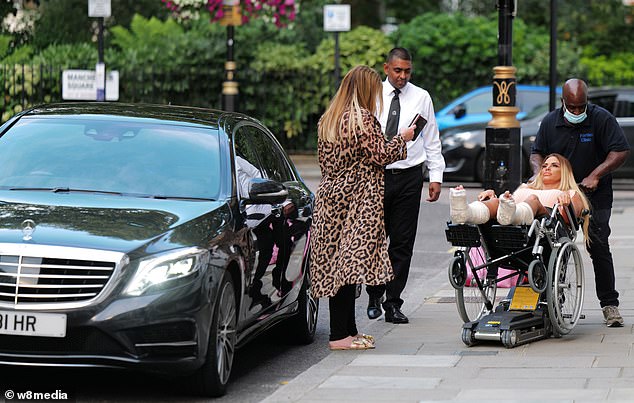 Challenging: The star was clearly disheartened by the outcome of her consultation, as she offered her fans an update on Instagram 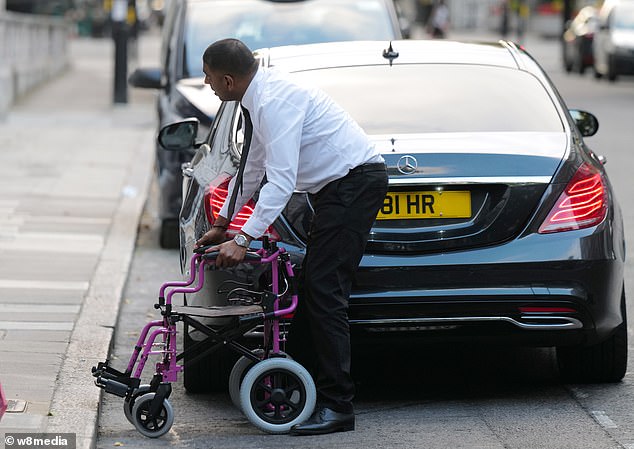 Funky: She still managed to put her own stylish stamp on things as her driver pulled out her own bright pink wheelchair

According to doctors, she will need pins in her feet which will undoubtedly be another agonising experience.

Katie thought she might have to cut her holiday short to head home with her Love Island beau, Carl Woods.

However, she decided to endure the pain and ride it out in Turkey for the sake of her children so that they could enjoy the rest of their holiday.

Carl has been by Katie’s side throughout the ordeal, and as they arrived back home on Wednesday it’s been revealed the smitten pair are planning to move in together. 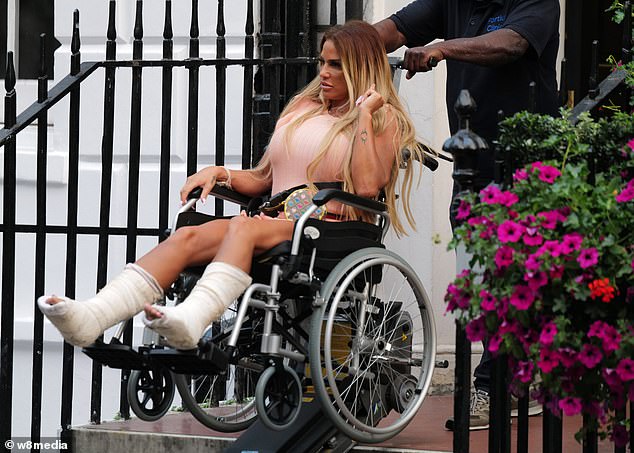 Off she goes! Several hours later Katie was wheeled out of the clinic following her consultation 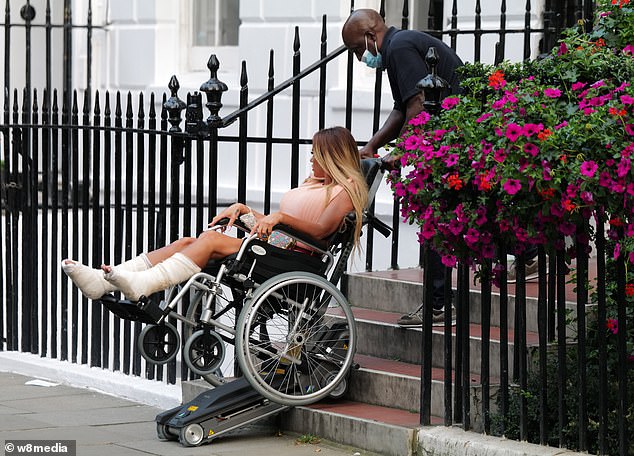 Steady now! She needed the help of an electronic ramp attached to the wheels to get her down the stairs 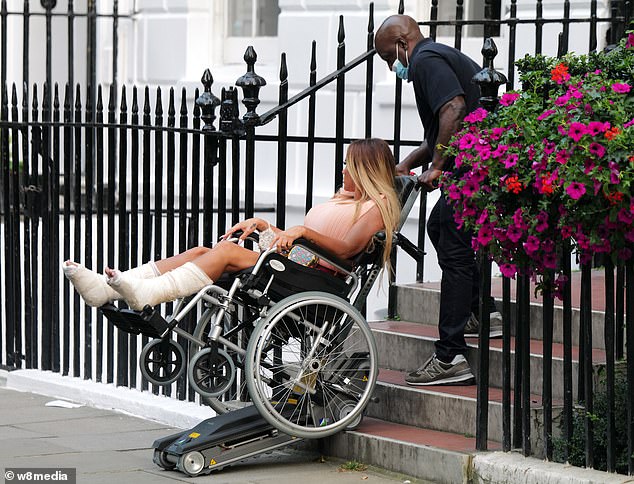 In pain: Katie has been left devastated by the injury, which happened following a ‘freak accident’ in Turkey 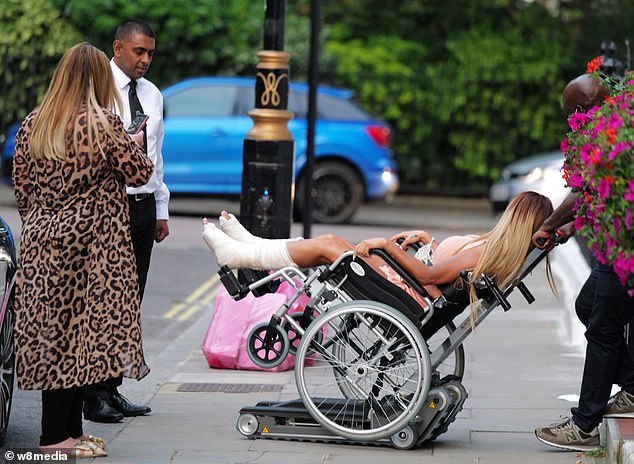 Supportive: Her pals ensured they were there to offer their support as she left the clinic with ‘absolutely devastating news’ 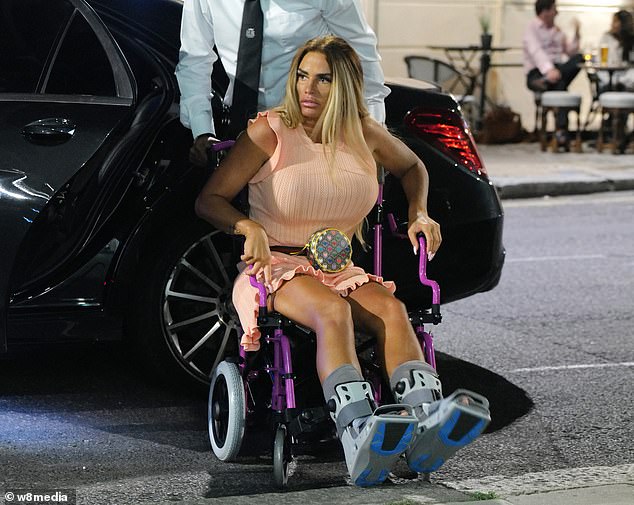 Feeling better? It later seemed that Katie’s friends were trying to lift her spirits as she was seen heading out for dinner in her pink chair

A source told The Sun: ‘She was talking about moving in with Carl before the holiday to Turkey, and being together 24/7 has only encouraged her to officially move in together.

‘They’re house-hunting together in Essex this week and can’t wait to live together. They’re extremely loved up and her kids have given him the thumbs up. She’s over the moon.’

A representative for Katie confirmed the plans, explaining: ‘As Katie is temporarily wheelchair-bound, something no one could have foreseen, she has voiced the possibility of looking for a property that would work better for her wheelchair access and mobility scooter.

‘Carl as Katie’s carer would be living with her. There is a lot to consider: Katie’s rehabilitation, the children, school, respective family, work commitments.

‘Essex would be a probable location – Katie however remains in her current rented property in Surrey.’ 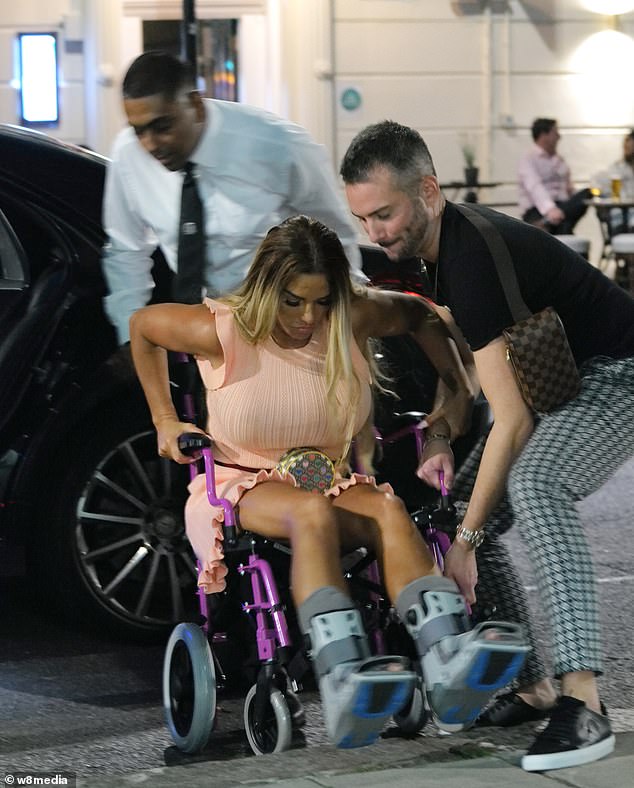 Friends: She needed her pal’s help to get over the pavement as she headed out for dinner in her stylish dress 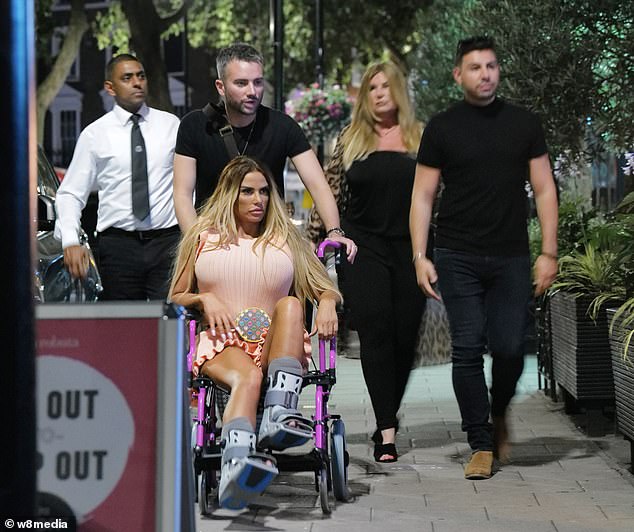 Difficult: Katie was rushed to A&E in Turkey last week for emergency surgery after doctors realised the extent of her horrific injuries 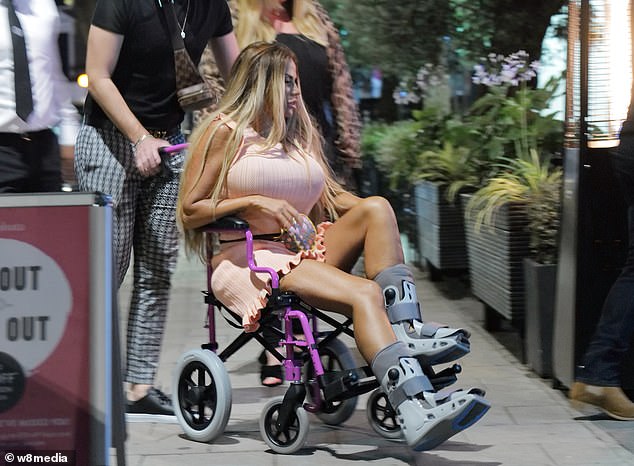 Scary: The TV personality had to spend a night in hospital after fracturing both ankles after she jumped off a wall at the holiday theme park, Land Of Legends

Earlier this week Katie slammed trolls who accused her of faking her injury – as her daughter Princess claimed her mother won’t walk properly for a year.

Taking to an Instagram video, the mother and daughter addressed those who have accused them of lying – after one troll claimed Katie was in fact abroad having bunion surgery.

‘By the way, someone said on my Instagram, ”Oh she has had bunions done on both feet!”

‘Well, when I have the X-rays and show you, I haven’t had bunions, I have never had bunions in my life!’ Katie insisted. 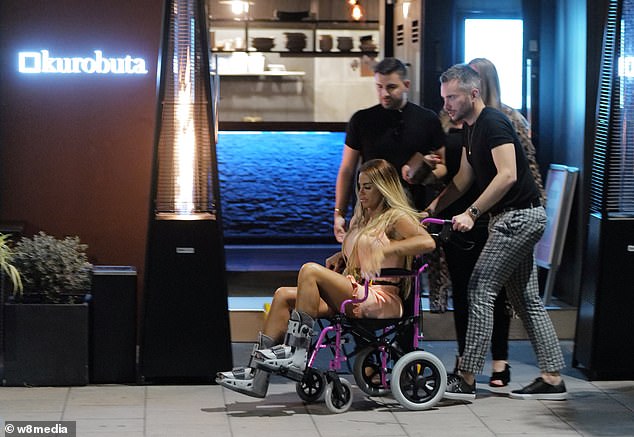 Angry: According to doctors, she will need pins in her feet which will undoubtedly be another agonising experience 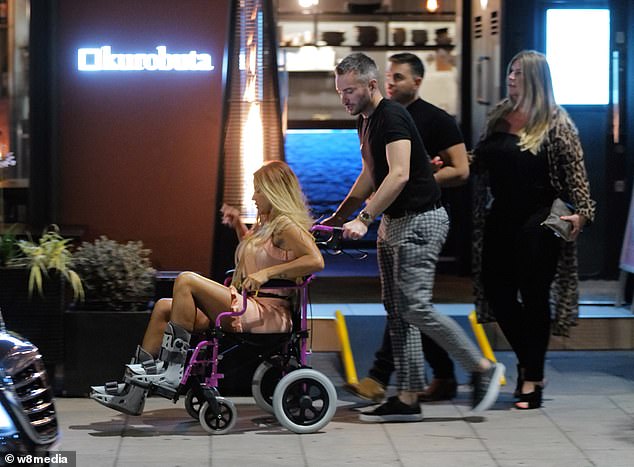 How long? Earlier this week Katie slammed trolls who accused her of faking her injury – as her daughter Princess claimed her mother won’t walk properly for a year

Princess then chimed in, saying: ‘She’ll be in a wheelchair for three to six months – but she won’t walk for a year!’

Attempting to explain the condition – which sees a painful bump appear where the toe and foot connect – Katie seemed unsure herself, saying: ‘Like, you know, the side where you get like… that is one thing perfect about me, my feet! But obviously they are not perfect now!

‘At least I am learning to use the wheelchair better now!’ 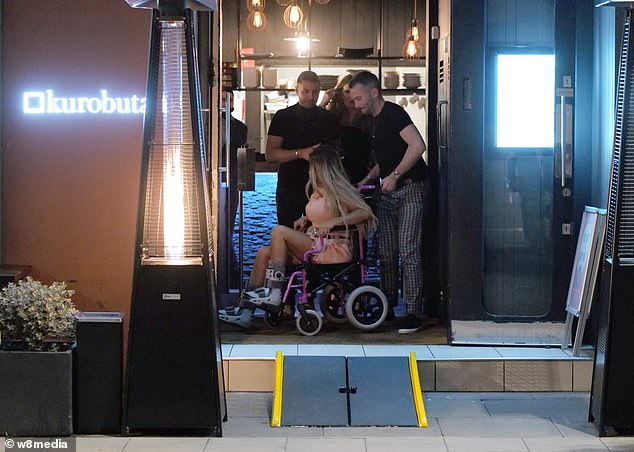 Jovial: Clearly hoping to lift her spirits Katie’s friends took her to dinner at Kurobuta after her disheartening consultation 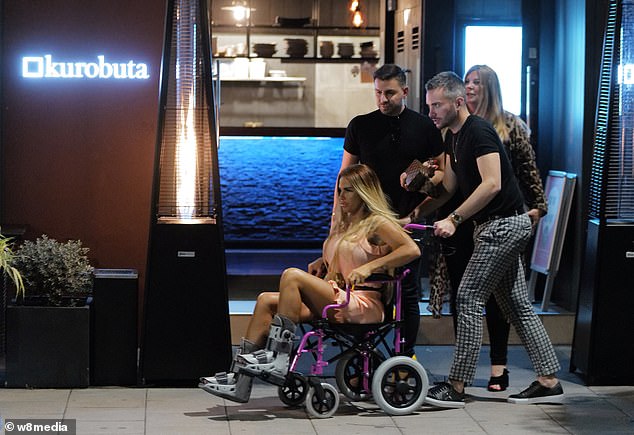 Worrying: It’s unclear what the prognosis for the star will be after seeing a specialist about her broken feet

Katie and the family travelled to Turkey for a relaxing getaway last week but things quickly turned to disaster when the mother-of-five broke both her ankles.

The reality star shared a clip of her trip to hospital on Monday as she writhed in agony and she cried out ‘it f***ing hurts’ and ‘someone help me’ as medics tended to her injured feet.

Katie posted a video online from her stint in hospital as she got her feet bandaged up by medical staff and she cried out from the horrendous pain.

As the doctor attempted to reposition her broken leg, the former glamour model yelled out ‘help, ouch, It’s hurting me,’ and pleaded with staff to operate on her. 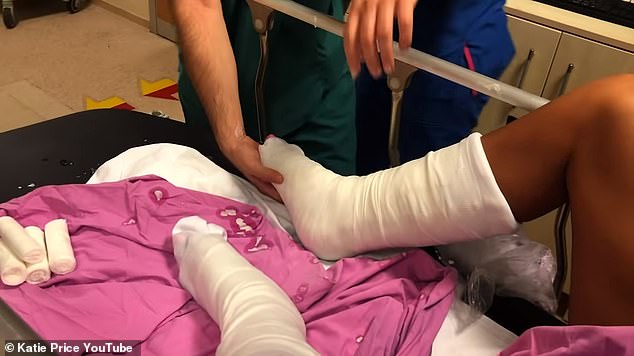 Agony: Katie posted a video on Monday of her experience at the hospital in Turkey as she fractured both ankles by jumping off a wall at a theme park on her holiday 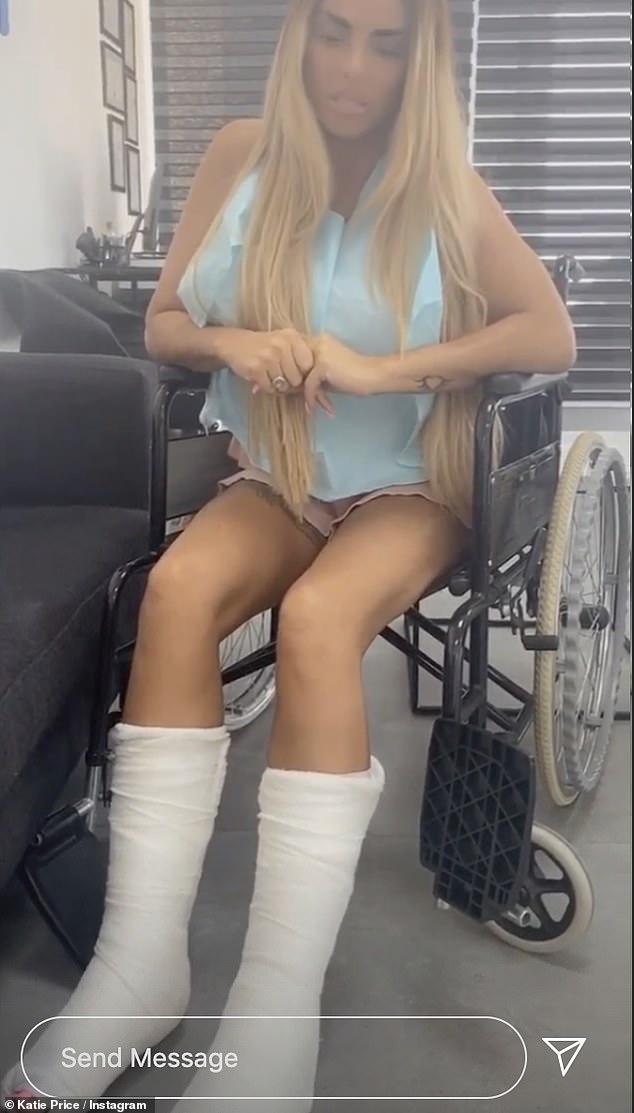 Soldier on: Katie decided to stay for the rest of her holiday for the sake of her children, Junior, 15, and Princess, 13, and has been getting around with the help of a mobility scooter

Coronavirus terror: Only HALF of Americans want to take vaccine as Trump ramps up pressure 0

Vitamin B12 deficiency: Experiencing this urinary problem could be a sign of a deficiency 0