They split in 2017 after welcoming two children together.And, Katie Price has reportedly fallen out with her ex-husband Kieran Hayler after he pose

American Idol alum Clark Beckham marries Chanlie Baker after five years together in Tennessee
Whitney Port is returning to fashion design after 6 years: 'I've just been itching to do this again'
Breakfast TV: How Sunrise became complacent and let Today catch up in the ratings


They split in 2017 after welcoming two children together.

And, Katie Price has reportedly fallen out with her ex-husband Kieran Hayler after he posed with their kids Jett, seven, and Bunny, six, and fiancée Michelle Penticost in a cosy magazine shoot, without her knowledge.

The glamour model, 42 – who is currently recovering from surgery on her two broken feet – is said to have been ‘livid’ that Kieran, 33, hadn’t given her a heads up that their kids would be included in the photoshoot. 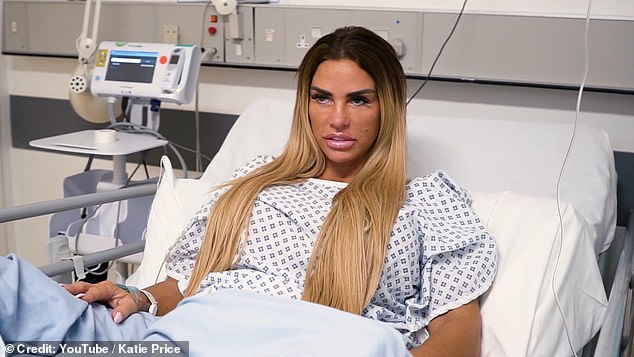 Livid: Katie Price, 42, has reportedly fallen out with her ex-husband Kieran Hayler, 33, after he didn’t give her a heads up that their kids would be included in a photoshoot with his fiancé

According to The Sun, Katie and Kieran were at loggerheads over the family snaps, which were published in New! magazine this week.

An insider told the publication: ‘She accused Kieran of not telling her it was coming. They normally operate on an amicable level but Katie said she felt totally out of the loop.

‘Katie is very protective over her kids and just likes to be across everything. She let rip at Kieran but after having it out they’ve drawn a line in the sand and have moved on.

‘Being a co-parent isn’t easy at the best of times but this was a step too far in Katie’s eyes.’ 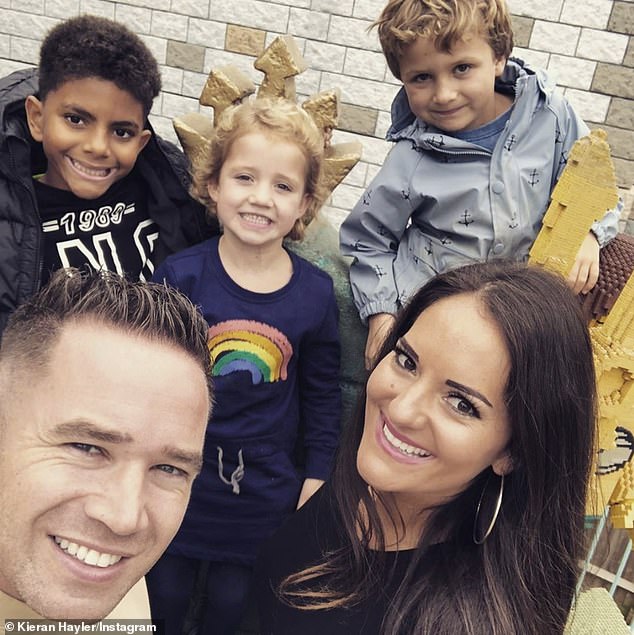 Cosy: The former stripper posed with their kids Jett, seven, and Bunny, six, and fiancée Michelle Penticost and her son Valentino, 10, in a cosy magazine shoot 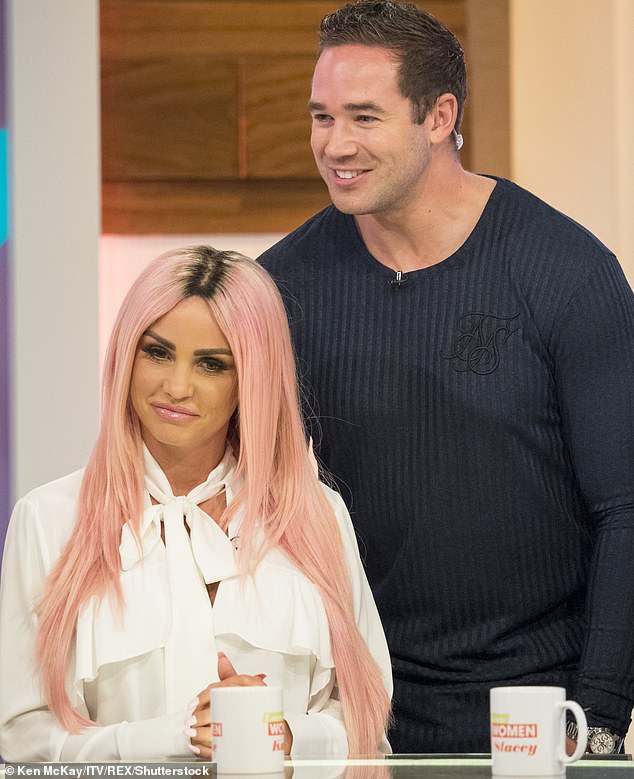 Amicable exes: ‘Being a co-parent isn’t easy at the best of times but this was a step too far in Katie’s eyes,’ an insider told The Sun (Pictured in May 2017)

Kieran embarked on a fast romance with Katie after they met on the online chat service, Blackberry Messenger, in November 2012.

They tied the knot just two months later during a holiday ceremony in the Bahamas, but their relationship came crashing down when it was discovered that he was having an affair with her best friend, Jane Pountney, and they embarked on divorce proceedings in 2019.

The former stripper is now engaged to mum-of-one Michelle Pentecost, while Katie recently embarked on a new relationship with former Love Islander, Carl Woods, 31, after her rocky relationship with personal trainer Kris Boyson ended earlier in 2020. 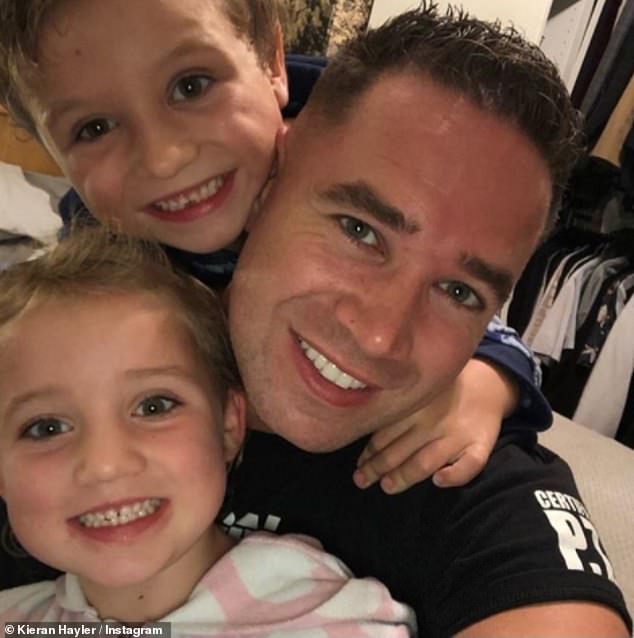 Breakup: Katie and Kieran got divorced in 2020 after they welcomed two children, Bunny, six, and Jett, seven

Reports of the exes’ recent argument comes after Kieran revealed he could be making his grand entrance on I’m A Celebrity, after the location for the upcoming series was officially changed from Australia to Wales.

The former stripper told New! magazine: ‘I’d love to go on I’m A Celeb.’ I think there have been talks but I don’t know for sure.’

‘I’d love to do it because I’m into the outdoors anyway so for me it would be really cool. I think it’s just the eating stuff I’d be a bit rubbish at – and it’s closer to home now I’ve heard!

The usual location, the Australian jungle, had to be changed by executive producers due to travel and filming restrictions surrounding the coronavirus pandemic.

Instead, the upcoming season is expected to take place in a ruined castle called Gwrych Castle, in North Wales. 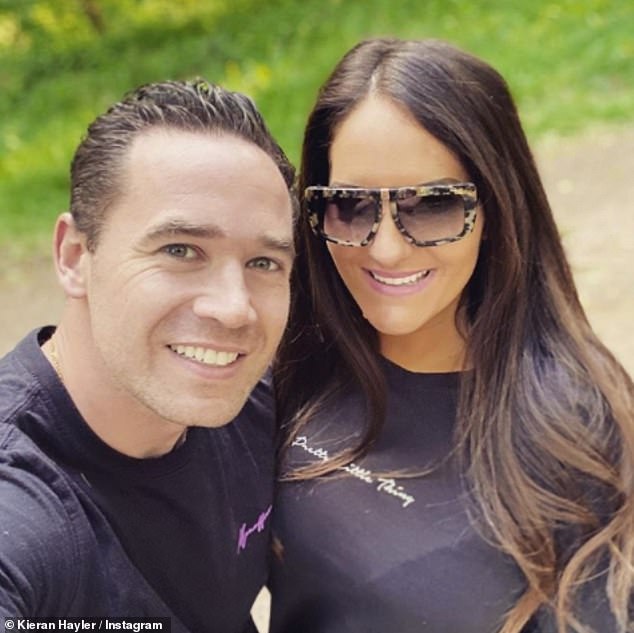 Loved up: The former stripper is now engaged to mum-of-one Michelle Pentecost 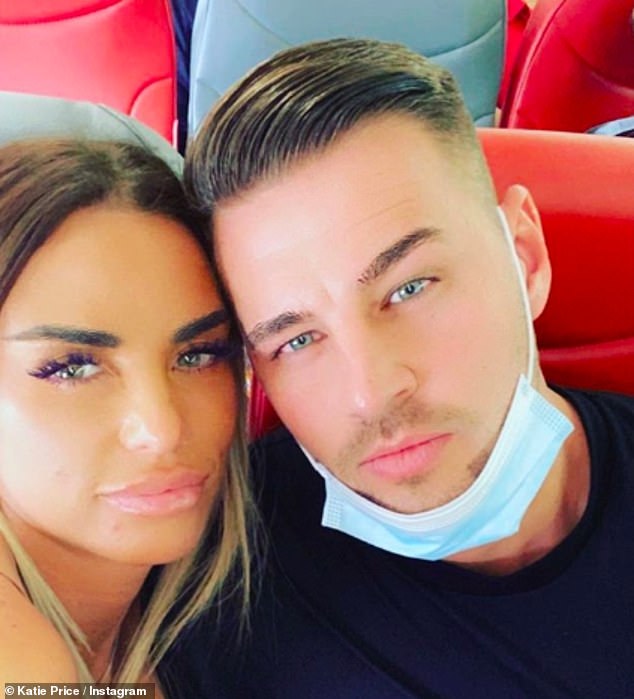 The former stripper would follow in the footsteps of his glamour model ex-wife and her other ex husband Peter Andre, 47, if he does sign up for the 2020 series.

Katie met her first husband Peter when they both appeared on the 2004 I’m A Celeb series and they now co-parent two children together, Junior, 15, and Princess, 13.

The glamour model and footballer Dwight Yorke, 48, dated in 2001 but split before Katie gave birth to her first child Harvey, now 18, born in May 2002.

Captain Sir Tom Moore: 'Things will get better… it's time to look forward' 0