She is expecting her first child with husband, Chris Pratt, in the coming months.

And Katherine Schwarzenegger hid her growing bump during her daily walk around her Los Angeles neighborhood where she met up with her dad Arnold Schwarzenegger, 72, and her sister Christina, 28.

The 30-year-old was all masked up and kept her look casual in activewear. 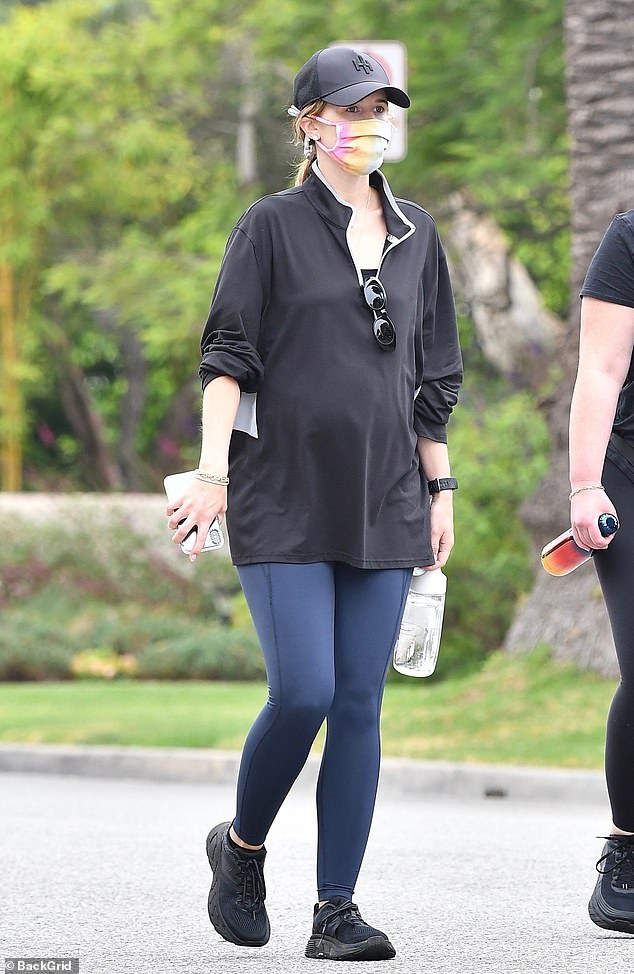 Covering up: Katherine Schwarzenegger was spotted hiding her burgeoning baby bump on Saturday morning when she stepped out for a walk with friends

Katherine stunned in an oversized long sleeved shirt the covered her burgeoning bump.

She teamed the look with a pair of navy colored full length tights and a pair of sneakers.

The beauty accessorised with a cap and a multi-colored mask. She appeared to be makeup free and styled her brunette hair back. 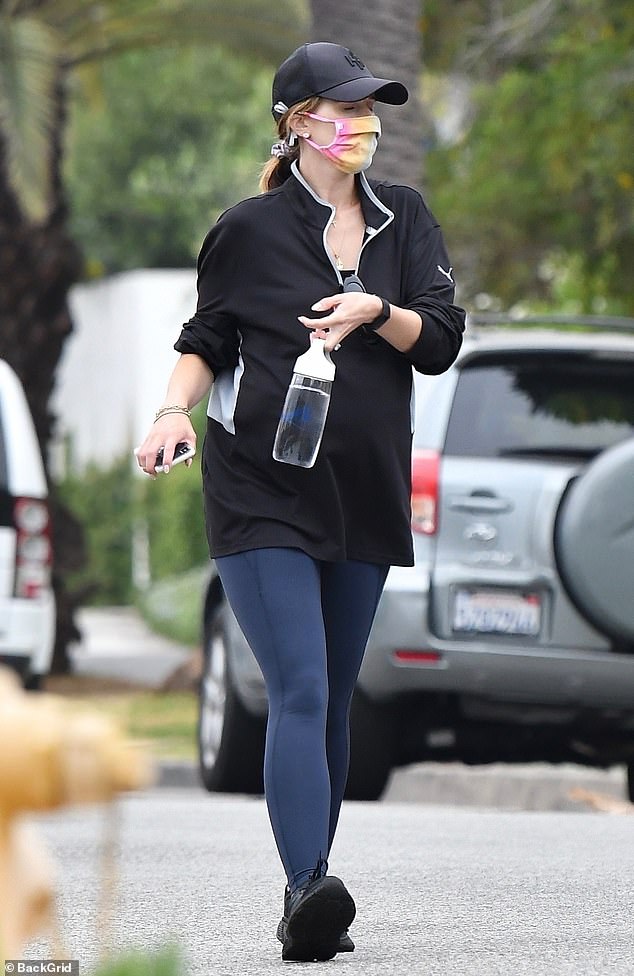 Hiding the baby: Katherine stunned in an oversized long sleeved shirt the covered her burgeoning bump 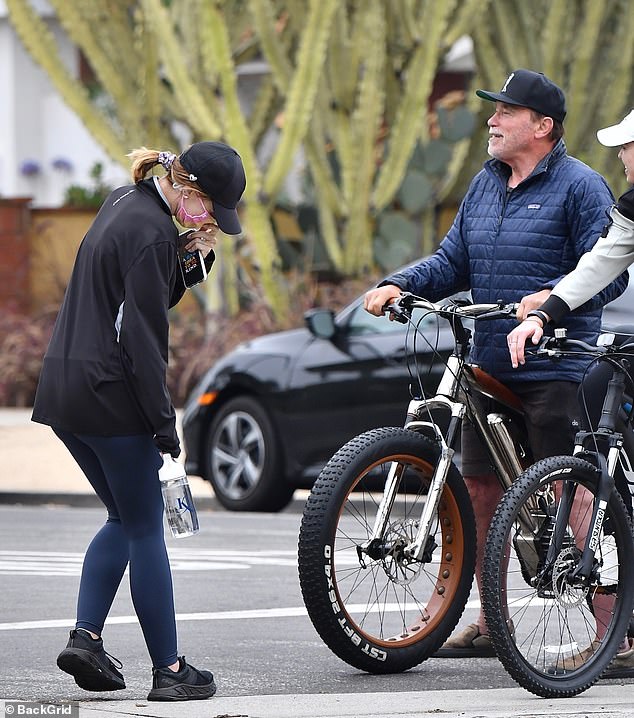 Family meet-up: At one point Katherine was seen laughing while catching up with her dad and sister

At one point Katherine was seen laughing while catching up with her dad and sister.

Arnold and Christina joined the-mom-to-be during their father-daughter bike ride around Los Angeles.

Arnold has continued to spend one-on-one time with his children during lockdown with bike rides around the city.

Also seen was his son, Patrick, 26, on a ride with his girlfriend, Abby Champion.

Katherine’s outing comes as the wife of Chris Pratt awaits the arrival of her first child, in the coming weeks. 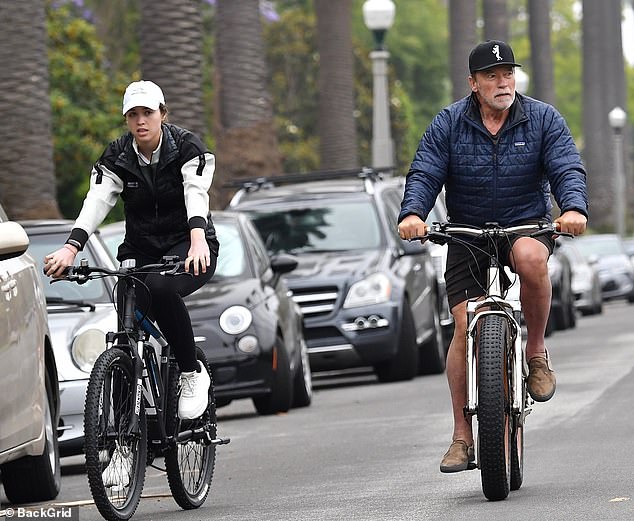 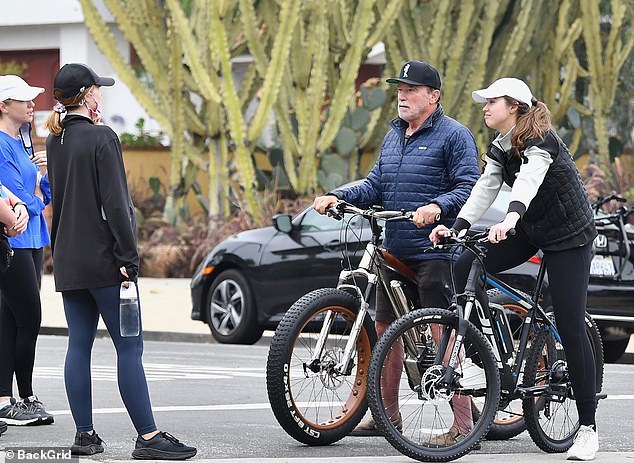 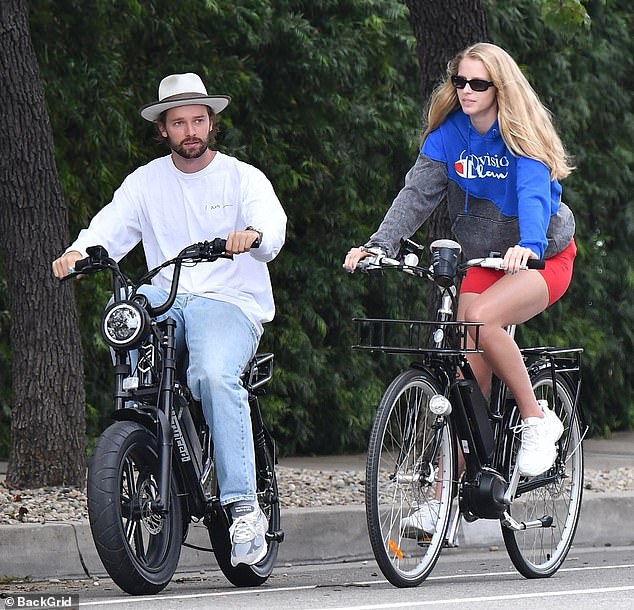 Family of bike riders! Also seen was his son, Patrick, 26, on a ride with his girlfriend, Abby Champion.

Dad Arnold Schwarzenegger, who was seen on his daily bike ride on Wednesday, shared his excitement over his first grandchild last month while speaking with Jimmy Fallon.

‘I mean, that is really exciting news that Katherine now, you know [to] be pregnant and have a baby—I don’t know when exactly. Sometime this summer,’ he dished.

‘And, inevitably, I’m really looking forward to playing around with whatever it is, she or he, and have some fun.’ 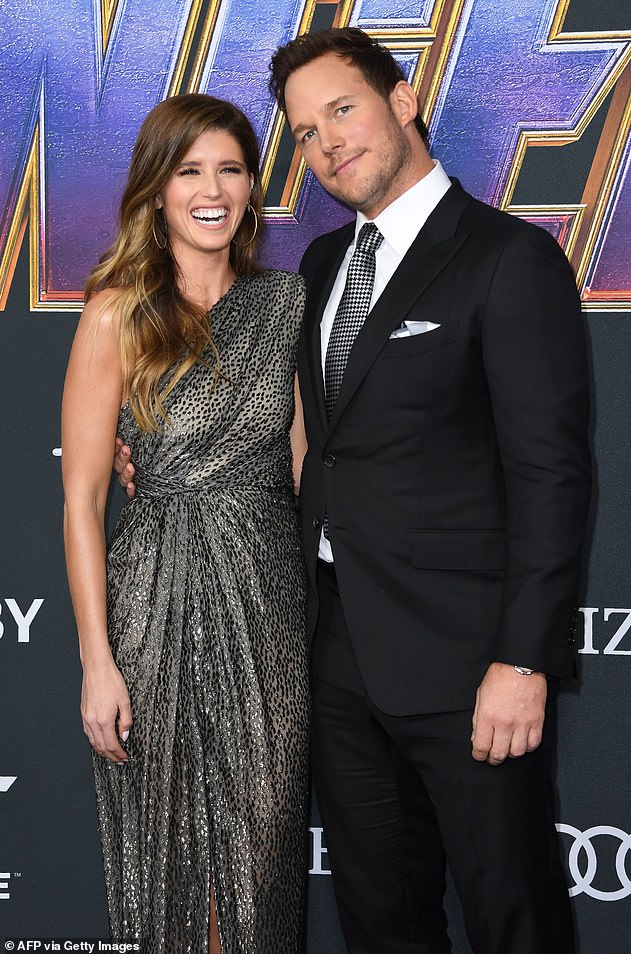 Nearly one year down! Chris and Katherine will be celebrating their one-year-wedding anniversary this week (pictured 2019)

Katherine and Chris began dating in 2018 and announced their engagement in January 2019.

They went on to marry in June 2019 and are said to be ‘getting more excited every day’ and ‘have been adding items to a baby registry,’ according to a People source.

This will be the actor’s second time as a father.

The Avengers star is already dad to seven-year-old son Jack, who he shares with ex Anna Faris. 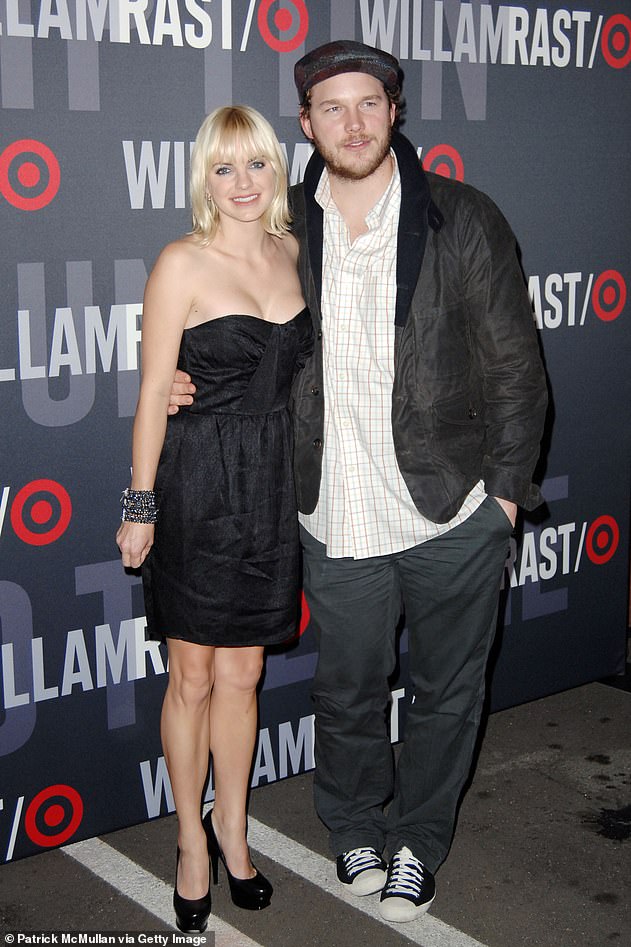 Former love: The Avengers star is already dad to seven-year-old son Jack, who he shares with ex Anna Faris (pictured 2010)

Tucker Carlson joins calls to reopen schools in the fall: 'Distance learning is not learning' 0

Ex-Panthers Spanish radio announcer, who tweeted on QAnon, says he was let go over Trump support 0