Josh Brolin's pregnant wife Kathryn announces family's move from their 'beloved' California to southeast region of US: 'The rest of th


Josh Brolin’s pregnant wife Kathryn announces family’s move from their ‘beloved’ California to southeast region of US: ‘The rest of the year brings a new adventure’

Kathryn Brolin broke the news she’s expecting her second child with husband and actor Josh Brolin back on July 7.

And now, some six weeks on, the 32-year-old actress took to Instagram to announce the family has picked up from California and moved to an undisclosed state back east.

‘The rest of the year brings a new adventure. Decided to skip out on our beloved Cali and move across the country,’ she captioned two photos showing herself and 21-month-old daughter Westlyn laying on the floor of their empty new home. 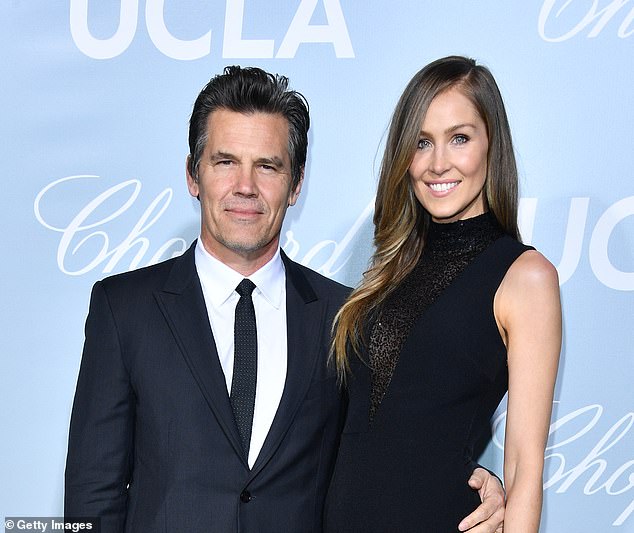 On the move: Kathryn Brolin announced she and husband Josh Brolin have moved from California to an undisclosed part of the east coast of the US

Kathryn did add a disclaimer about the move east by revealing: ‘We will be back’ to the Golden State.

‘In the mean time, we will settle in, eat take on the floor in our not yet furnished abode, wipe the sleep from our jetlagged eyes and dance along to Elmo in the kitchen,’ she added, which was a reference to the photos of their new house.

It turns out husband Josh has not yet made the move across country just yet. 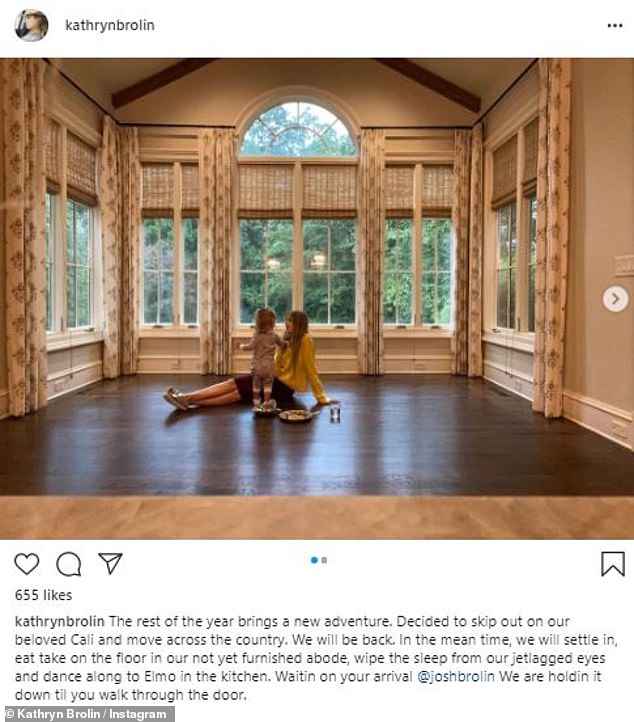 New digs: Kathryn, 32, revealed the family’s move in the caption of two photos showing herself and 21-month-old daughter Westlyn laying on the floor of their empty new home 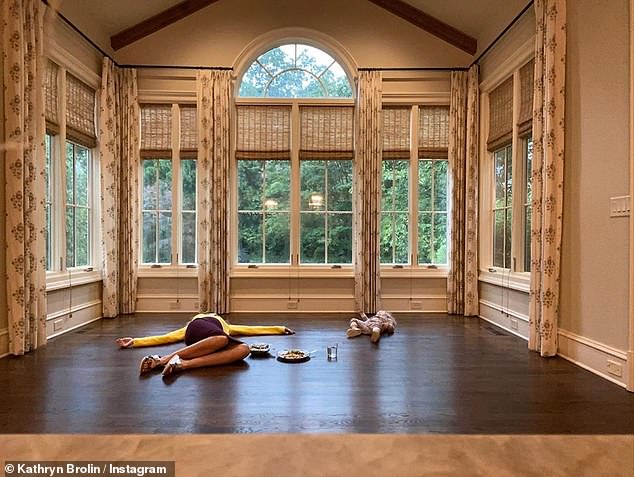 Holding it down: Kathryn said she and Westlyn are waiting on Josh’s arrival to their new home

‘Waitin on your arrival @joshbrolin We are holdin it down til you walk through the door,’ she gushed about her husband of almost four years.

Kathryn did reveal to her 126,000 followers that they moved to the southeast region of the US when she shared a couple of photos taken outside the residence on her Instagram Stories.

‘Oh the beauty of the southeast,’ she wrote across the pictures that showcased all the lush green leaves, brush and trees surrounding the house. 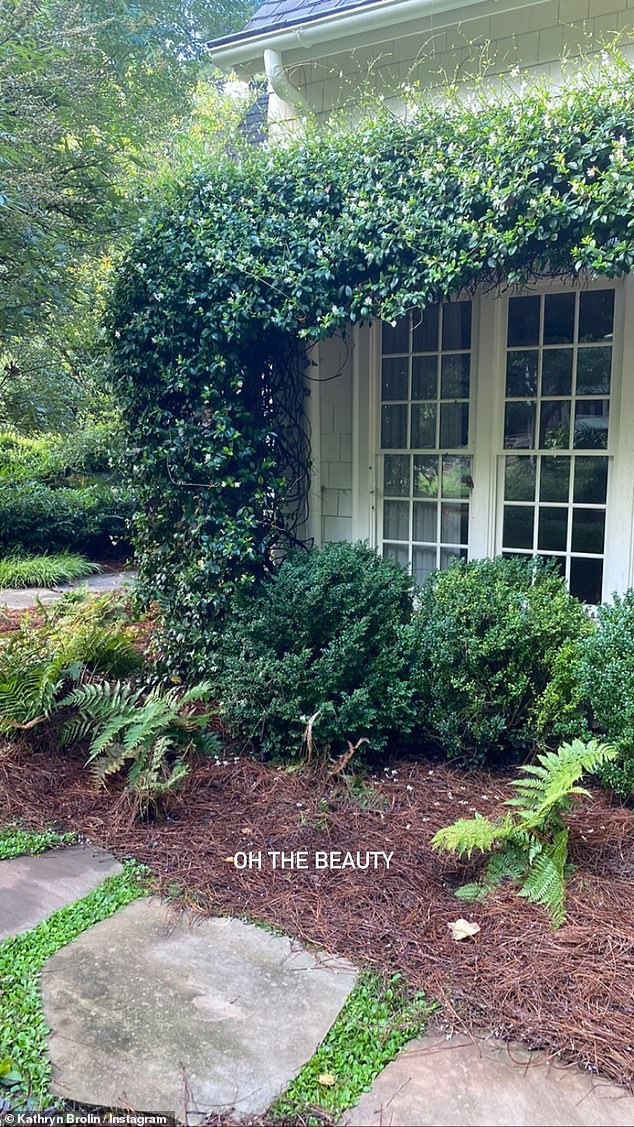 Hint: Kathryn did reveal that they moved to the southeast region of the US 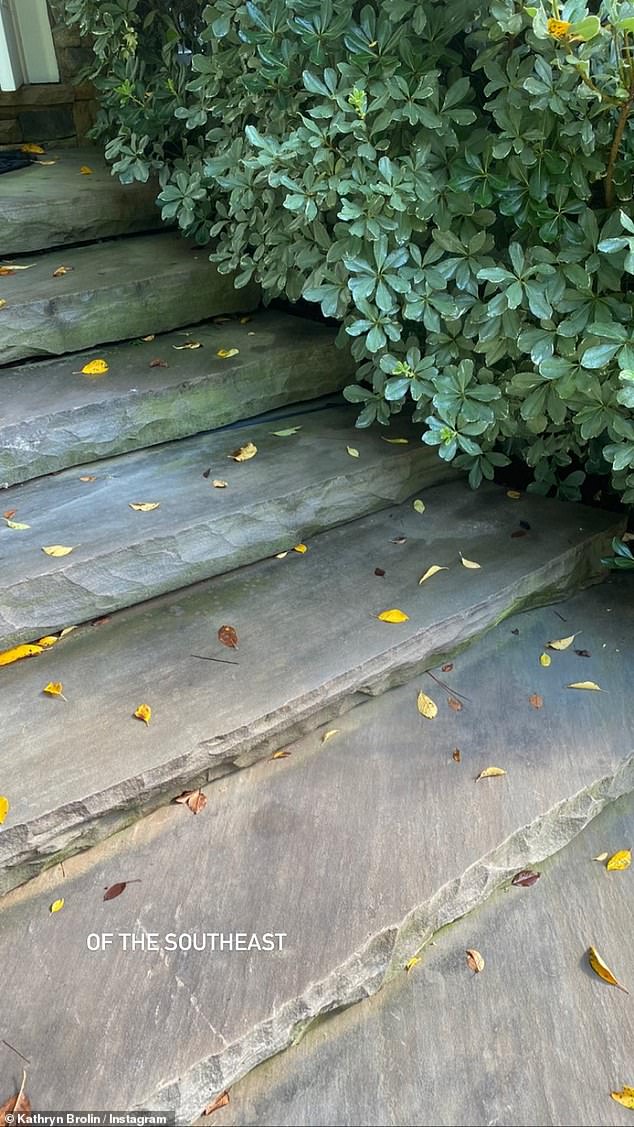 Gorgeous; The photos showcased the lush green brush and trees surrounding the house 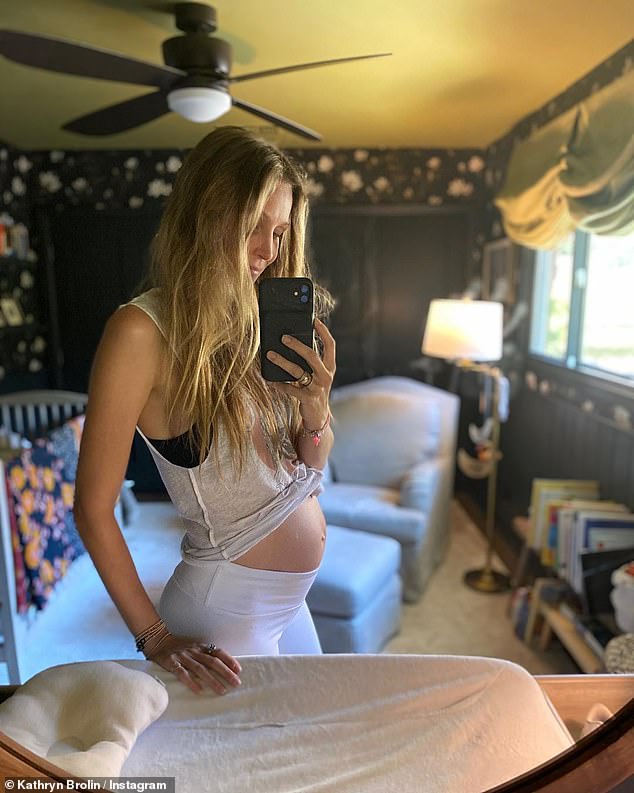 Baby #2: The actress, 32, most recently showed off her baby bump in a photo she posted on Instagram Wednesday,  August 12

Kathryn announced her pregnancy news in July by sharing a photo of herself baring her growing midriff in a crop top and denim shorts as she gave her daughter Westlyn a sweet smooch.

‘The Brolin’s are a growin’ !! Our little December babe is on the way….’ she wrote in the caption, which referenced the due date of their pending baby.

The couple, who celebrate their fourth wedding anniversary in September, welcomed daughter Westlyn in November 2018.

Josh also shares son Trevor Brolin, 32, and daughter Eden Brolin, 26, with his first wife Alice Adair, who were married from 1988 until 1994. 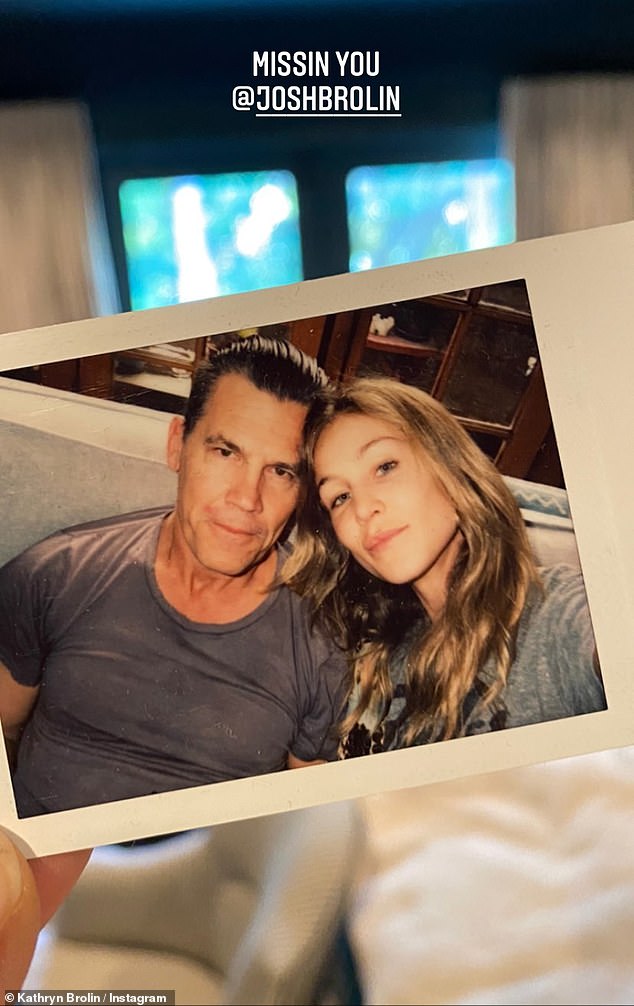 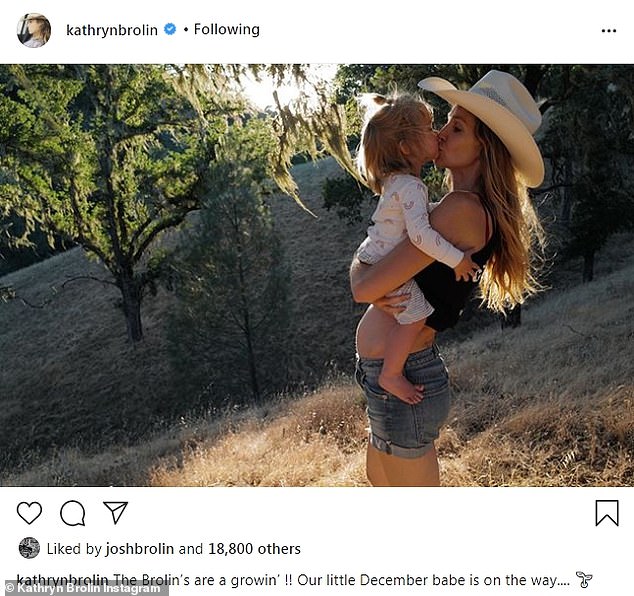 Lovely: The Brolins announced they were expecting their second child together along with a photo of Kathryn showcasing her mini baby bump as she gave Westlyn a sweet smooch