Jessica Alba was spotted arriving at her office in Los Angeles on Thursday morning.

The 39-year-old actress appeared to have just arrived at her workplace after making a quick pre-work coffee run. 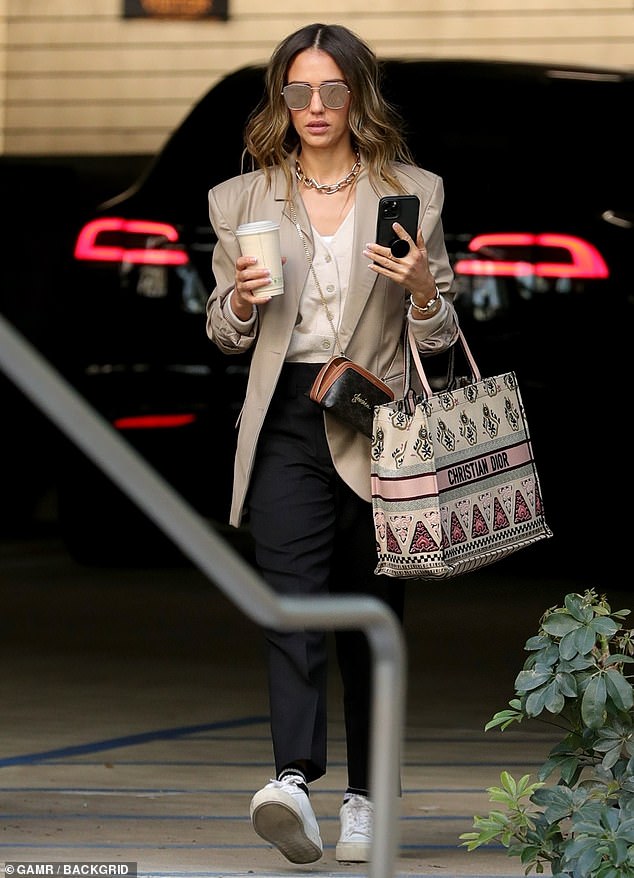 Looking good! Jessica Alba set a new standard for workplace chic while arriving to her office in Los Angeles on Thursday morning.

Alba was dressed in a tan wide-shouldered jacket with Eighties style pads; she rolled her sleeves up before arriving at her office.

She wore a button-up white blouse underneath her top, which was contrasted with a pair of black chino pants.

The actress also wore a pair of stark white sneakers and a set of multicolored socks.

The businesswoman’s partially dyed hair was allowed to cascade onto her shoulders as she arrived at her office. 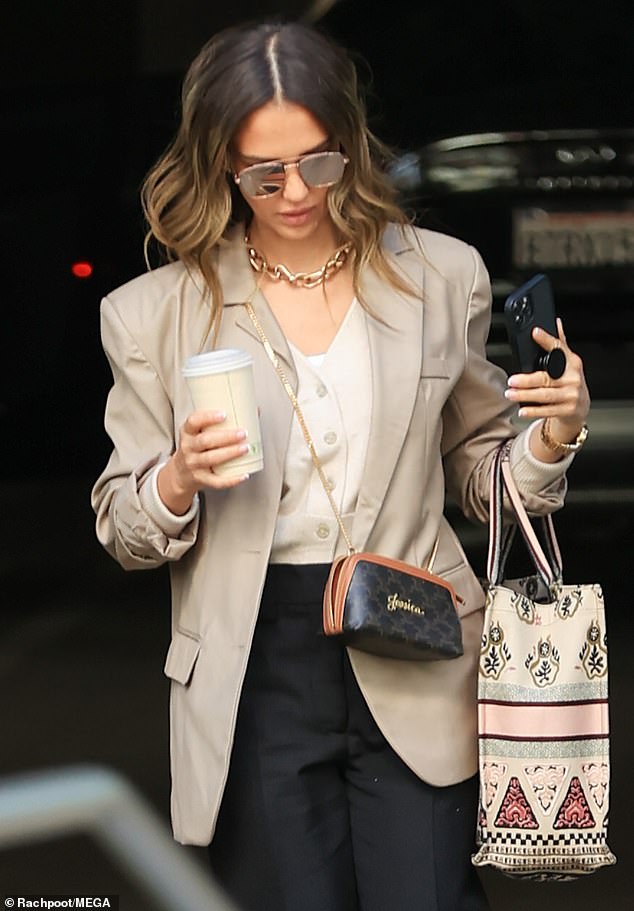 Great outfit: The Machete actress wore a tan wide-shouldered jacket; she had rolled up her outer layer’s sleeves 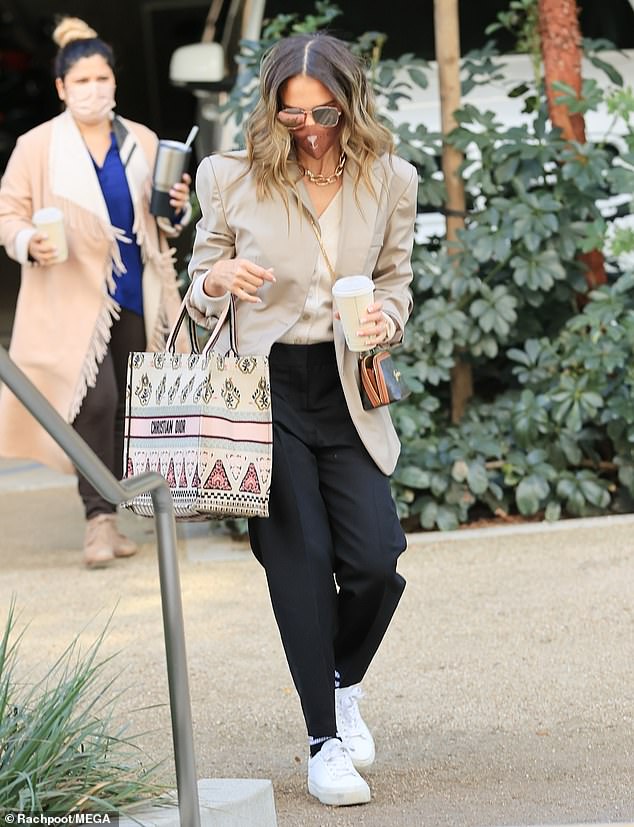 Contrast: Underneath her top choices, Alba wore a pair of black chino pants and white sneakers along with a set of multicolored socks

Alba was spotted carrying a large patterned Christian Dior bag with her, as well as a smaller purse featuring her first name emblazoned across its front.

The actress accessorized with a pair of reflective sunglasses as well as a gold chain necklace and a watch.

At certain points during her outing, the Machete actress was seen wearing a large brown cat print facial covering to keep herself safe amid the global pandemic. 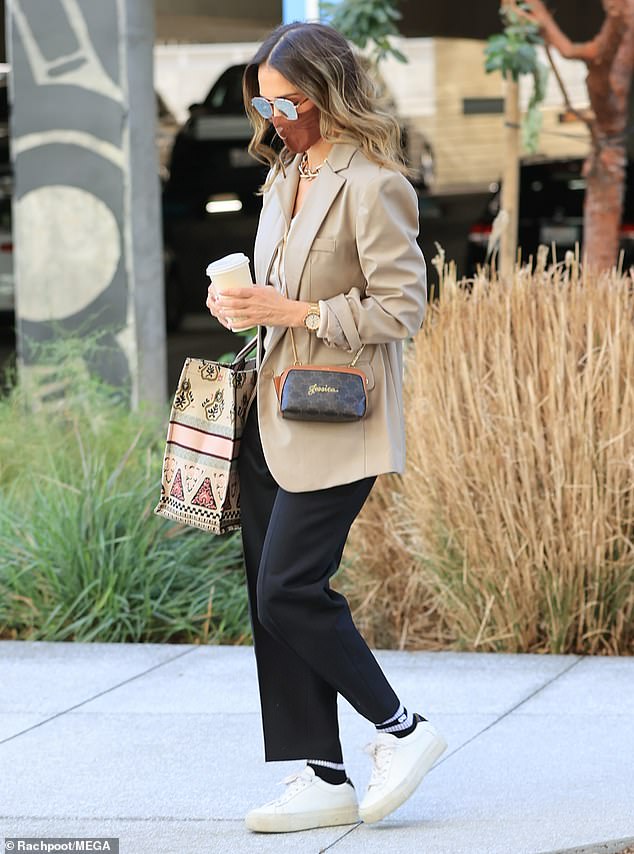 Extra storage: The businesswoman also carried a large Christian Dior bag with her, as well as a smaller purse featuring her first name emblazoned across its front

Apart from her career as an actress, Alba has maintained an interest in the retail sector and founded The Honest Company in 2011.

The brand was founded with the intention of distributing everyday products that were not created with toxic materials.

The Honest Company was valued at just under $1 billion in 2017, and Bloomberg recently reported that the brand’s heads were preparing to confidentially file for an IPO.

Branching out: Apart from her acting career, Alba is one of the founders of The Honest Company, which offers retail products that are not created with toxic materials. During an interview with Elle, the actress expressed that The Honest Company has made a point of ‘taking care of our employees’ mental health’ during the global pandemic

Earlier this month, Alba spoke to Elle and remarked that, even in the midst of a global pandemic, she was making sure that The Honest Company’s employees maintained a positive state of mind.

‘As a business owner, the thing that has made the most impact is taking care of our employees’ mental health and being there for them… it allows everyone to show up and be happy and be productive,’ she said.

During the interview, the actress also noted that her children often interrupted her business meetings and that she had to get used to them being around for any virtual call she may have.

Alba stated, ‘My kids are running in the middle of meetings and asking me to help them work or argue about something. There is no separation of work life, home life anymore.’ 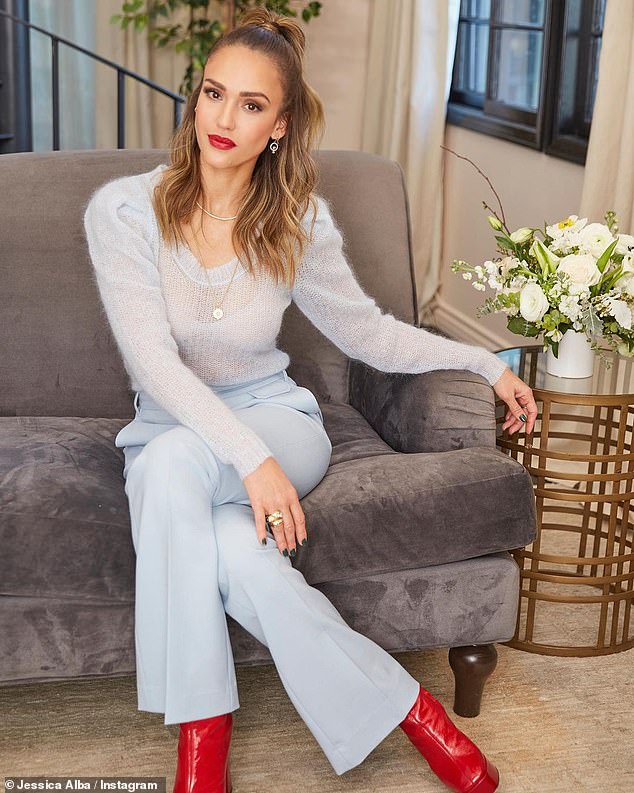 Don’t be negative: Earlier this month, Alba spoke to Elle and remarked that, even in the midst of a global pandemic, she was making sure that The Honest Company’s employees maintained a positive state of mind