They've spent June enjoying the sunshine and some quality time together on her father's £28m yacht in Croatia.And Jay Rutland made sure his wife Ta


They’ve spent June enjoying the sunshine and some quality time together on her father’s £28m yacht in Croatia.

And Jay Rutland made sure his wife Tamara Ecclestone’s birthday got off to a good start on Sunday by sharing a sweet of snap of them with their daughter Sophia, six.

The doting husband posted a stunning image of his family in front of a sunset in Hvar Town, alongside the caption: ‘Happy birthday Tamara, we love you very much.’ 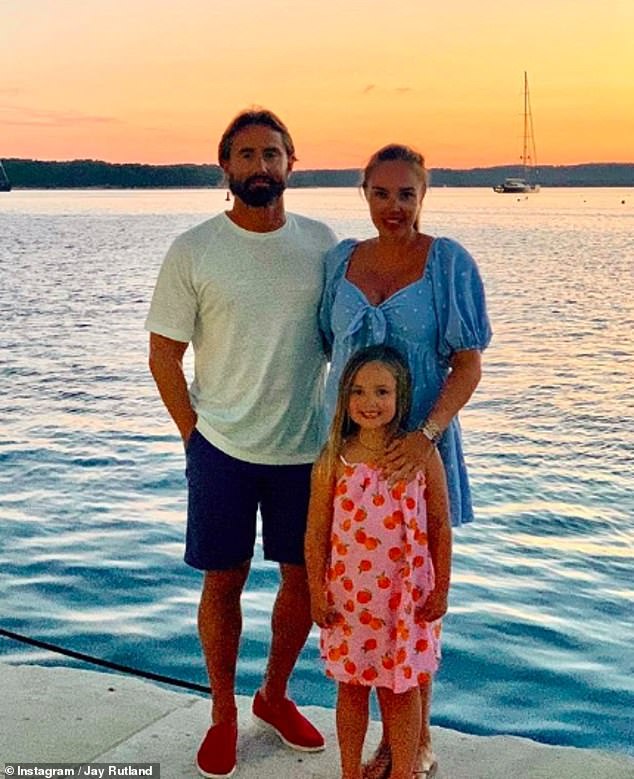 Happy birthday! Jay Rutland, 39, shared a sweet family snap to celebrate his wife Tamara Ecclestone turning 36 on Sunday while they are in Croatia with their daughter Sophia

Businessman Jay opted for a laid-back ensemble in the sun-soaked snap, donning a white t-shirt and navy shorts.

While birthday girl Tamara cut a fashionable figure in a blue polkadot dress which plunged at the front and boasted puff-sleeves.

Their little girl Sophia, who is also called Fifi by her family, looked sweet in a pink sundress with orange fruits all over it.

For the past month Tamara and her family have been spending time on her father Bernie’s yacht. 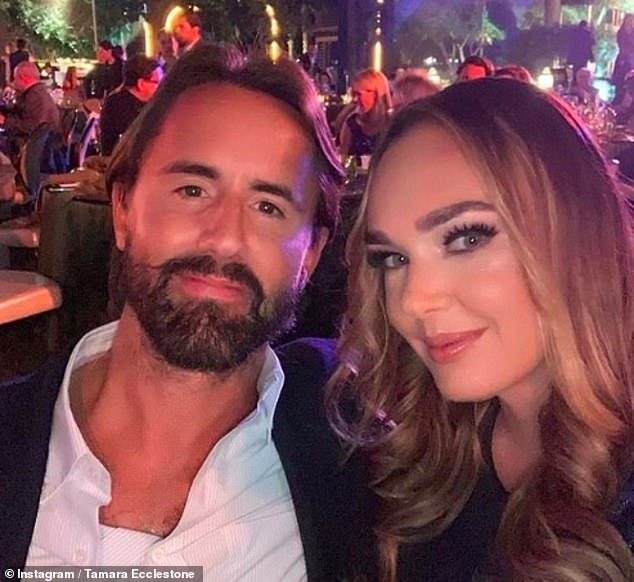 Happy times: The couple, who married in 2013, have been enjoying lots of family time during lockdown

During their time abroad they have shared several snaps of Sophia enjoying a dip in the sea and them exploring Croatia together.

However it has not all been plain sailing and the family have had to deal with Bernie facing criticism for comments he made about black people which later sparked controversy with F1 Champion Lewis Hamilton.

And earlier this month, the star hit out at her critics after being slammed for taking her family to Croatia amid the coronavirus pandemic. 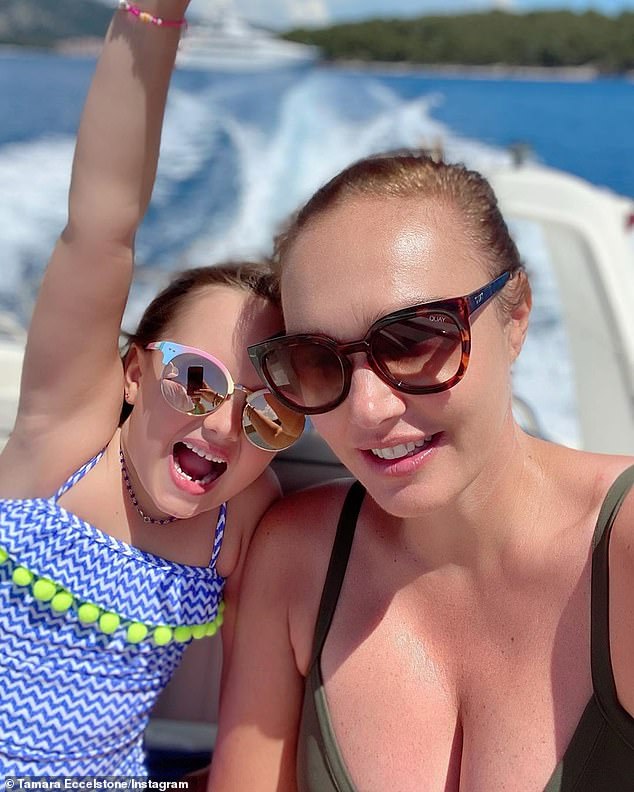 Having fun: Tamara (pictured with her little girl Sophia) spent the final weeks of being 35 on her father Bernie’s £28m yacht 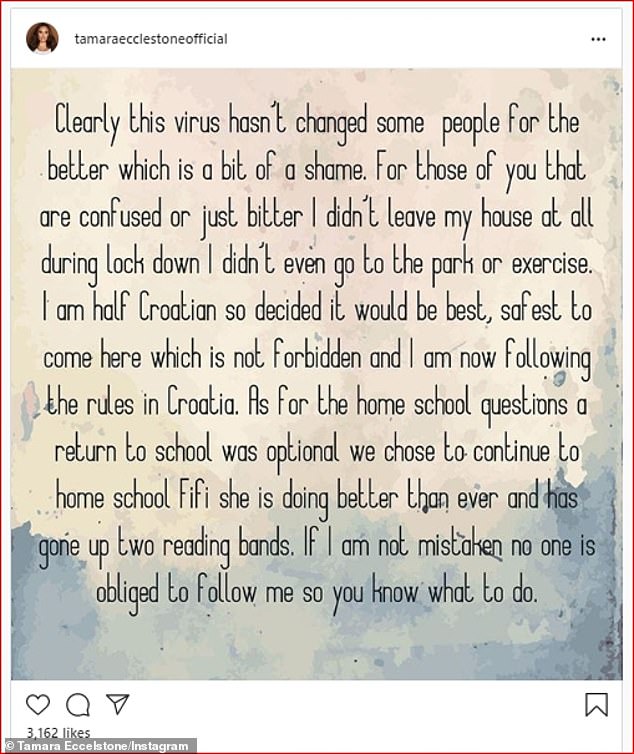 Defending: Since they went to the yacht, Tamara’s social media has seen a surge of criticism – leading to her staunch defense in a lengthy Instagram post

The heiress arrived in her mother’s native country alongside her husband, daughter Sophia, her sister Petra, 31, Petra’s fiancé Sam Palmer and her four children.

Since the family were seen luxuriating on the sisters’ father Bernie’s £28m yacht, Tamara’s social media has seen a surge of criticism – leading to her staunch defence in a lengthy Instagram post.

Tamara, Jay and Sophia have been joined by Petra, Sam, Petra’s daughter Lavinia, seven, and twin boys Andrew and James, five, who she shares with her ex-husband James Stunt, and her and Sam’s newborn daughter.

The duo were lucky enough to have their father’s yacht at their disposal. The 176ft yacht, which boasts six cabins, is named Petara – after Bernie’s daughters – with her name being an amalgamation of the Petra and Tamara’s name. 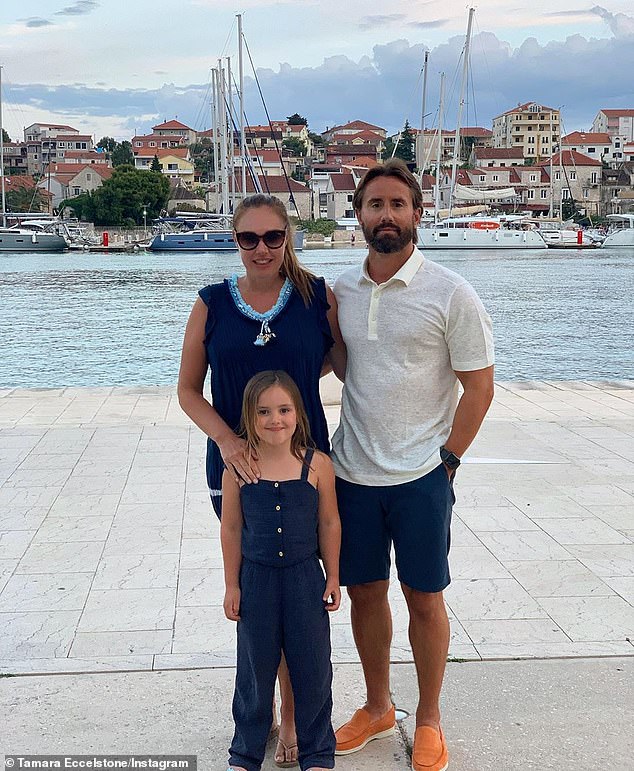 Don’t come for me! It appears Tamara has been met with wrongly-placed criticism for taking Sophia out of school, endangering the public – leading to her clarification

It appears Tamara has been met with wrongly-placed criticism for taking Sophia out of school, endangering the public – leading to her clarification.

Tamara penned a lengthy caption reading: ‘Clearly this virus hasn’t changed some people for the better which is a bit of a shame. For those of you that are confused or just bitter. I didn’t leave the house at all during lockdown…

‘I didn’t even go to the park or exercise. I am half-Croatian so decided it would be best, safest to come here, which is not forbidden and I am now following the rules in Croatia. As for the home school questions, a return to school was option…

‘We chose to continue to home school Fifi she is doing better than ever and has gone up two reading bands. If I am not mistaken no on is obliged to follow me so you know what to do.’

Last month, Krunoslav Capak, the director of Croatia’s Institute of Public Health, said there would be ‘no bans, just precautions’ on the country’s beaches. 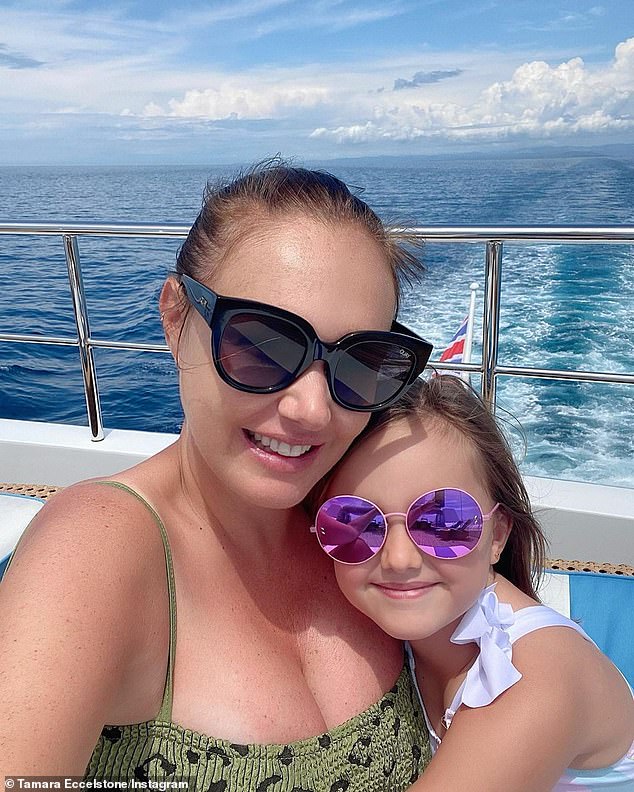 Look-a-like: Tamara has shared several sweet selfies with her beloved little girl during the trip

Dry skin amid the coronavirus pandemic, winter: Tips to avoid making it worse 0

Should NFL set moratorium on hirings until after Super Bowl? 0