Jake Quickenden and girlfriend Sophie Church have announced the birth of their first child, a baby boy.

An ecstatic Jake took to Instagram, where he told fans: ‘ITS A BOY….. meet Leo Oliver Quickenden. I am so overwhelmed right now, but first I want to say sophie you’re amazing and watching you during all this made me love you even more. 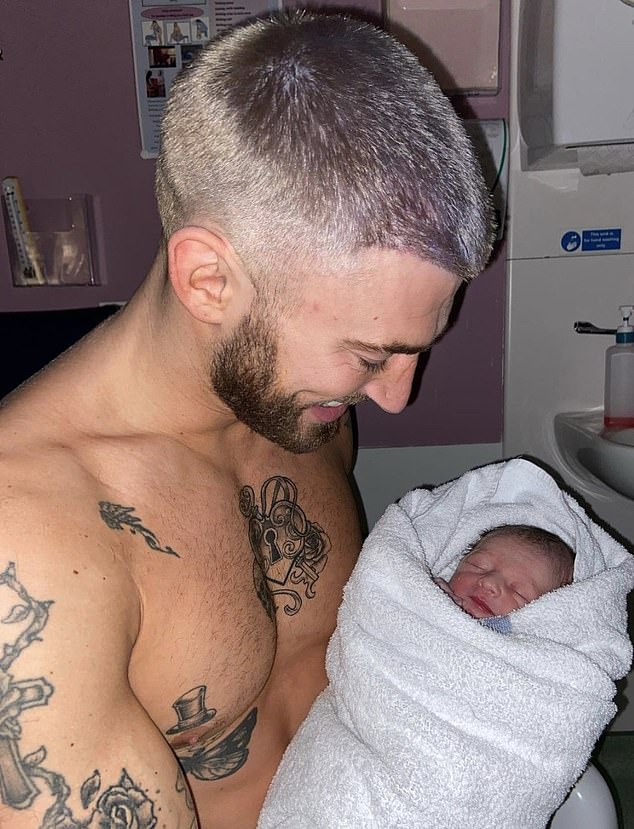 ‘I already know you’re an amazing mum and cannot wait to raise this beautiful little baby with you!! I also have such a mixture of feelings, I’m so so happy but also feel a little sadness my dad and brother are not around to meet my baby!!

‘I promise to be a great dad, I will make mistakes but promise I won’t make the same one twice, I will learn on the job like most parents and will do everything in my best interest for you.

‘The most beautiful thing in the world. All very tired but that’s obviously expected! Much love. The birth was beautiful and really quick!!! Well done @sophie__church

The pair had been left ‘disappointed’ as they tried to grow their family for a year and a half, but doting boyfriend Jake reassured Sophie by insisting they should ‘stop putting pressure on themselves’ and declared ‘it will happen when it’s meant to happen’. 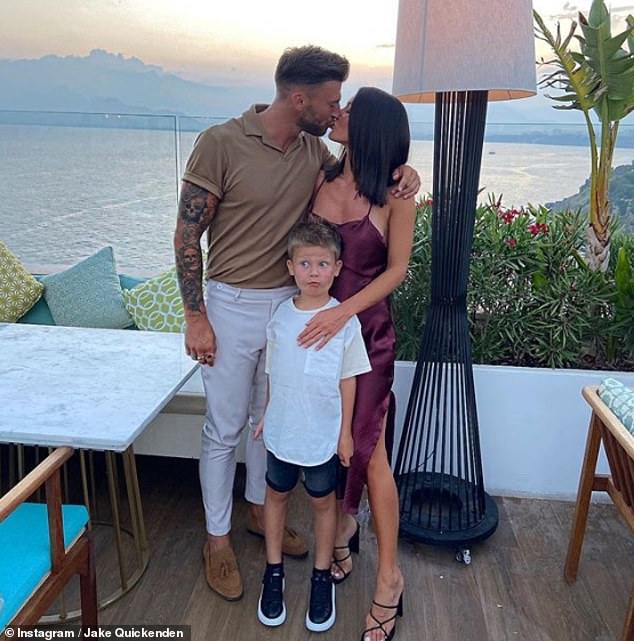 So happy: The happy news comes little more than a year after the couple suffered a heartbreaking miscarriage when beautician Sophie was six weeks pregnant

Speaking to HELLO! magazine in September, Sophie said:  ‘Even though I was only six weeks pregnant it really hit me hard. With this pregnancy we still carry that worry, so it was nice to have the scan and know that everything is okay.

Jake, who started dating Sophie after splitting with ex Danielle Fogarty three years ago, admitted he couldn’t wait to be a hands on dad.

He told the publication: ‘I’m excited for everything, apart from the nappies! It’s something I’ve always wanted to do and I feel completely ready for it.’

The media personality also detailed his relationship with his stepson, adding: ‘Freddie is a little legend. He’s like my best mate. I met him when he was four, but I don’t say that I’m his dad because I’m not and he’s already got a really great dad. He’s got me used to being around kids and it will be so nice to have my own child, too.’ 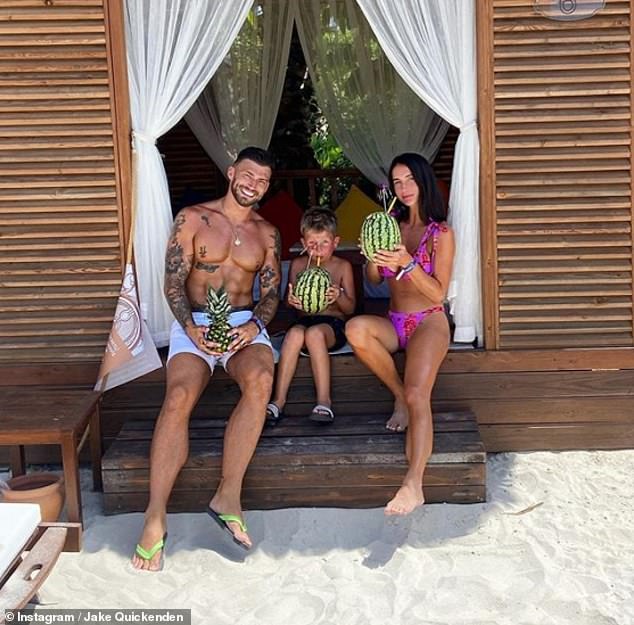 Proud mother:  Sophie is already a parent to six-year old son Freddie from a previous relationship

Jake confirmed Sophie’s pregnant with Instagram followers in September while sharing a sweet caption about following in his late father’s footsteps, who passed away from bone cancer in 2008.

He wrote: ‘I AM GOING TO BE A DAD!! I can’t believe it , we are going to have a little Jake or little sophie causing mayhem!!

‘My dad was the best dad in the world and I also have an incredible step dad, I wish my dad was about to see how I will be a role model to this baby, Fred’s super excited as well. 2021 is going to be the biggest test yet, but I’m so excited for it!’ [sic] 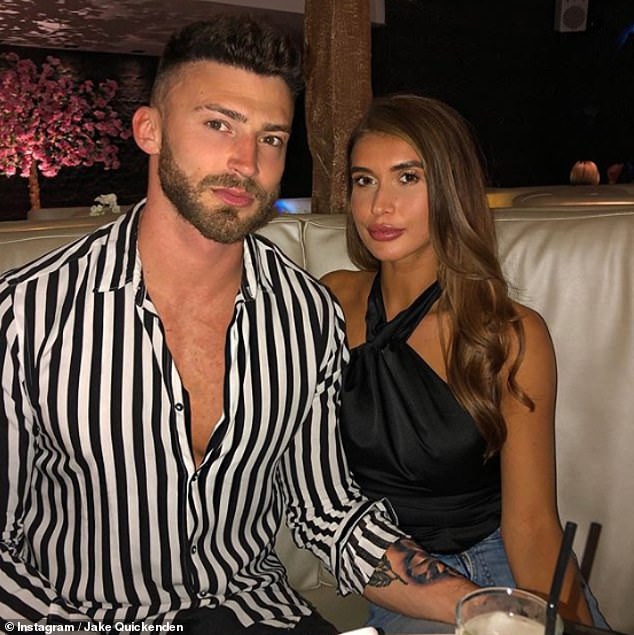 Looking ahead:  Jake, who started dating Sophie after splitting with ex Danielle Fogarty three years ago, recently admitted he couldn’t wait to be a hands on dad

Earlier this year, Jake told Lorraine viewers about life in lockdown with Sophie and Freddie, revealing: ‘We’re either going to be together, or I’m going to be single by the end of this lockdown, I’ve been winding her up.

‘Little Freddie comes jogging with us, we also play in the garden while Sophie works from home. If we all stick together, we will be stronger in the end.’

Jake was previously engaged to ex Danielle, who he split from in April 2018.

They were said to have been at the centre of much tension following the influx of female attention he has received from his stint on Dancing On Ice.

The former couple had been dating for three years but called it quits just seven months after he proposed to her. 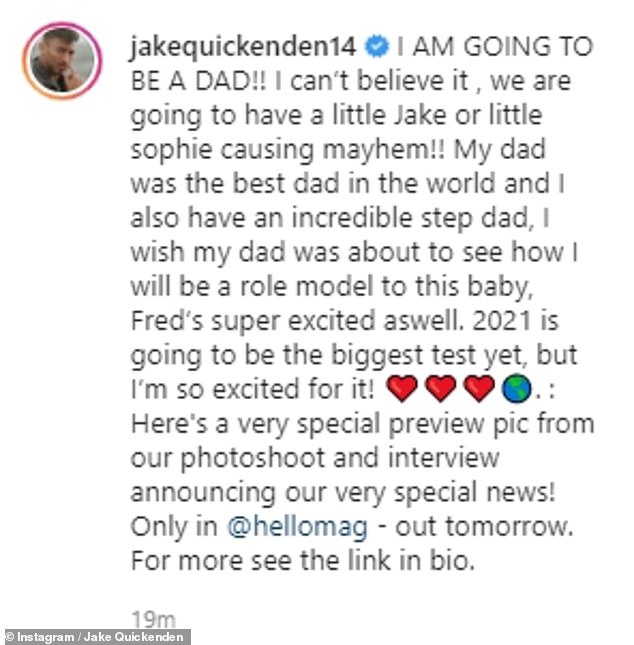 Delighted: Jake confirmed Sophie’s pregnant with Instagram followers in September while sharing a sweet caption about following in his late father’s footsteps 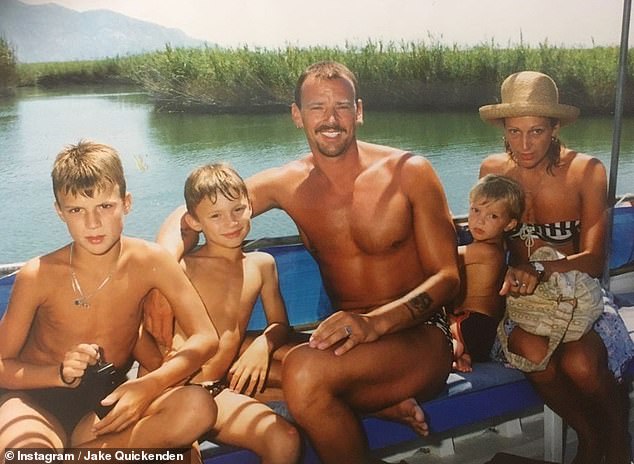 Double loss: Jake tragically lost both his father and brother to bone cancer (Jake pictured when he was a child, alongside his two brothers, mother and father)

Dia Mirza Is Craving Cake, Thanks To This Adorable Throwback Picture! 0

Weight loss myth: Eating late at night does not make you put on weight says expert 0