Jada Pinkett Smith was joined by her children at a rally at Kentucky State Capitol in Frankfort on Thursday to demand justice for Breonna, who was

Jada Pinkett Smith was joined by her children at a rally at Kentucky State Capitol in Frankfort on Thursday to demand justice for Breonna, who was shot dead by Louisville police officers while sleeping in her apartment in March.

Jaden Smith, Jada and husband Will Smith’s 21-year-old son, posted an portrait of himself with his mother, 48, and younger sister Willow, 19, at the rally.

He including the caption: ‘No Justice, No Peace. This Is Going To Be A Life Long Battle For Our Generation, Buckle Up, and get ready to vote. #justiceforbreonnataylor’ 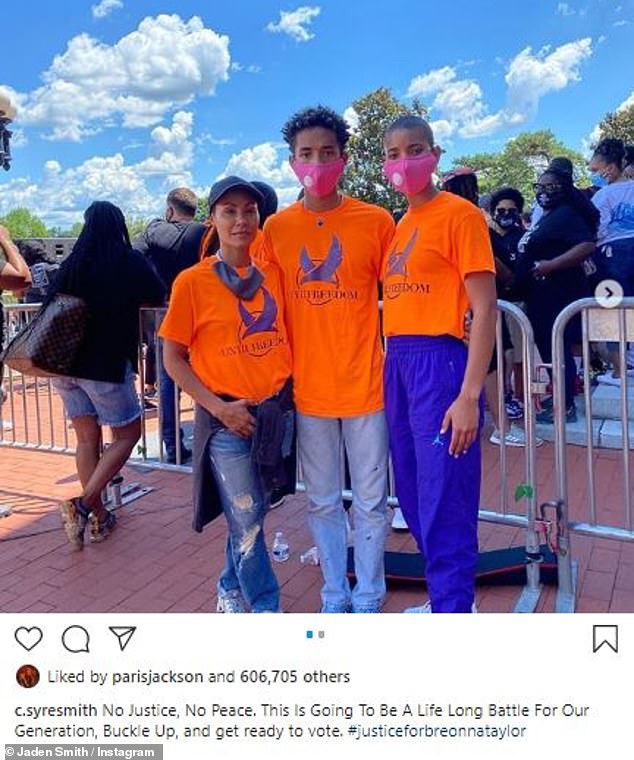 Showing up: Jada Pinkett Smith was joined by her children Jaden Smith and Willow Smith at a rally at Kentucky State Capitol in Frankfort on Thursday to demand justice for the March killing of Breonna Taylor 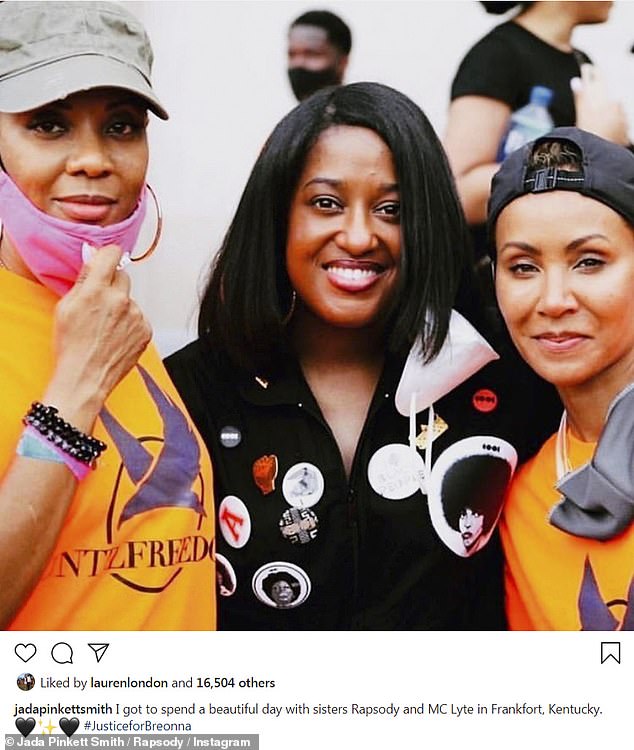 Moments in solidarity: Pinkett Smith was also joined by rappers MC Lyte and Rapsody at the demonstration

At the demonstration, dubbed the Until Freedom rally, Jada spoke to hundreds of people who gathered at the capitol to demand action in the investigation of the officers involved in the fatal police shooting now that over three months have elapsed since Breonna’s death.

‘One thing I want you to know is that it does not go unseen that the revolution stands on your shoulders. I want you know that we want to say thank you, because it is you standing out here that’s gonna keep shining a light on Breonna’s name.

‘And, what we need is justice for our sister Breonna and that’s why we are here today’ Pinkett Smith continued. ‘And that’s why my family is here today. From one family to another – to Tamika [Palmer, Breonna’s mother], we wanted to come here, show her love and amplify your voice and amplify the life of your daughter.’

The Matrix Revolutions actress also took to social media to document the moment, posting a photo of herself with rappers MC Lyte and Rapsody at the rally.

Jada’s words come as other celebrities from Janet Jackson to Amy Schumer continue to speak up on social media regarding Breonna’s death, with Tiffany Haddish asking in a post on Thursday, ‘How are you showing up for Breonna Taylor?’ 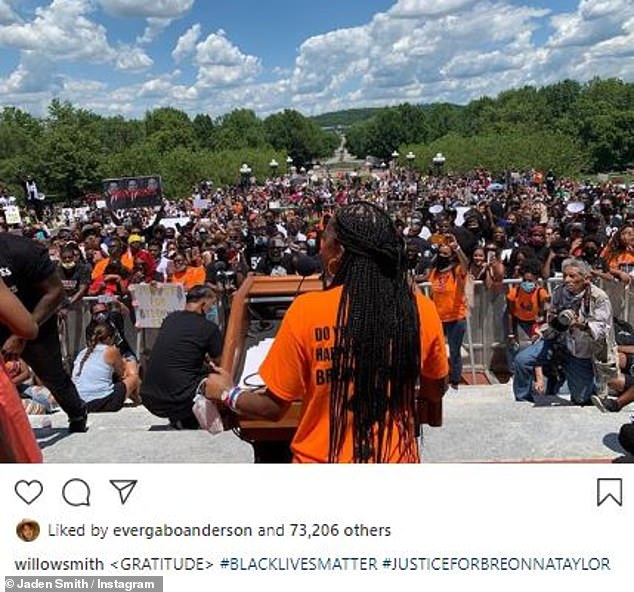 Power in numbers: Willow and her brother also posted this visual from the event 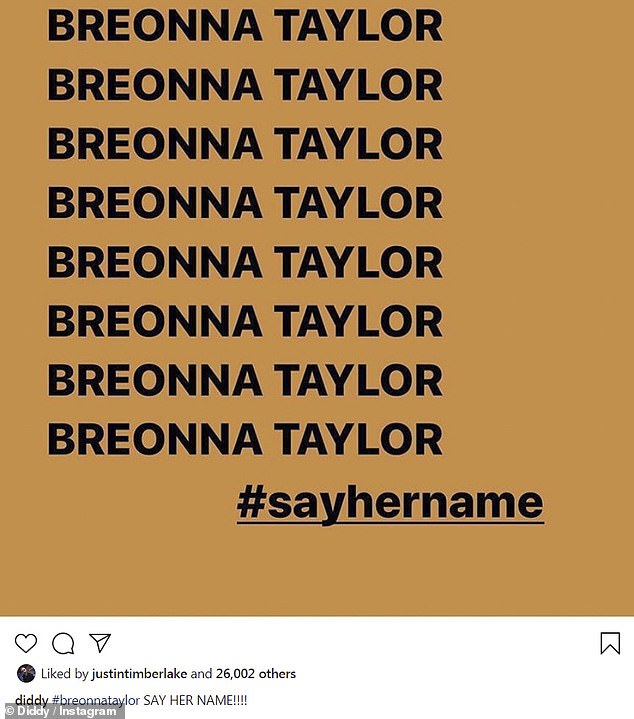 Speaking out: The rally comes as other celebrities like P Diddy continue to speak up on social media regarding Breonna’s death

Tiffany Haddish asked in a post on Thursday: ‘How are you showing up for Breonna Taylor?’ 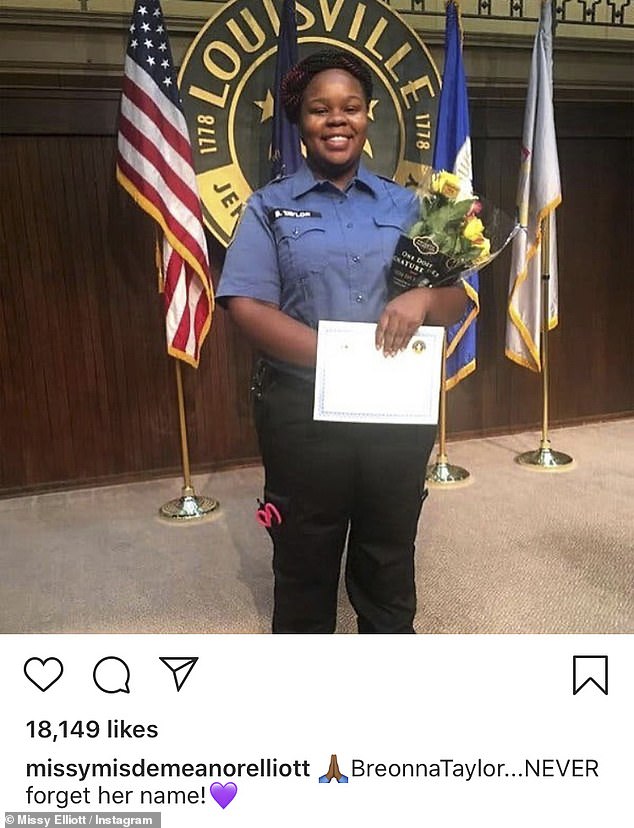 In remembrance: Missy Elliott took to her social media with a stock photo of Taylor, adding in the caption, ‘NEVER forget her name!’

In the caption, Haddish wrote, ‘It’s been 100 DAYS and still no justice!’

Taylor was an EMT who was killed on March 13th when her boyfriend, Kenneth Walker, awoke in the night to find three cops who had walked in with a no-knock search warrant, leading him to assume they were intruders.

Gunfire ensued from both Walker’s firearm as well as those of the police officers, with over 20 shots fired – including eight hitting Kenneth’s sleeping partner Breonna. 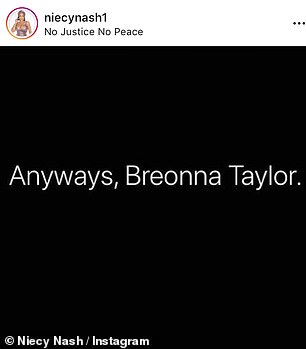 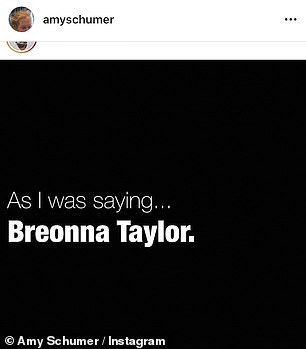 Enough is enough: Celebs from Niecy Nash to Amy Schumer are speaking up on their platforms to demand justice, urging authorities to fire, arrest and convict all officers involved

The warrant to search Taylor’s home was in connection with a suspect who did not live there, and no drugs were found inside.

To date, only one of the officers involved, detective Brett Hankison, has been fired.

Posts from Zoe Saldana, P Diddy and others demanding justice were timed with the rally on Thursday in Kentucky, where rapper Common spoke in addition to Pinkett Smith. 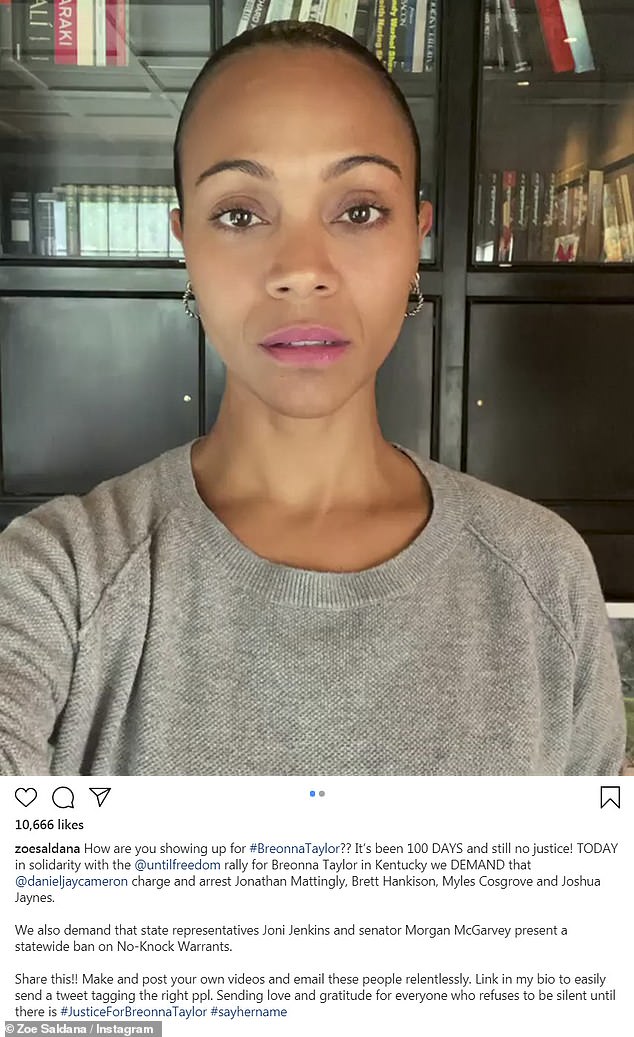 She ‘refuses to be silent’: Posts from Zoe Saldana and others demanding justice were timed with the rally on Thursday in Kentucky 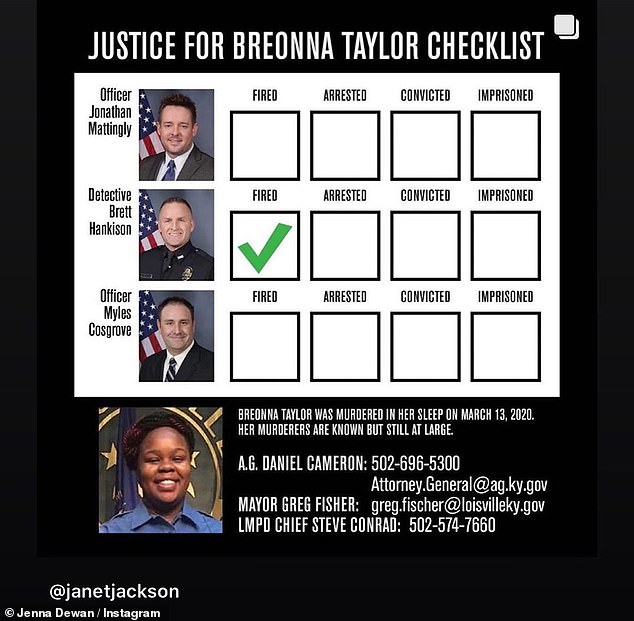 Using her platform: Actress and dancer Jenna Dewan reposted this informative visual shared by Janet Jackson which shows how much more needs to be done in seeking justice for Breonna

Common wrote on Instagram alongside a video of his speech, ‘Justice For Breonna Taylor Rally … We flew out to #Kentucky earlier today to demand justice for Breonna Taylor at a special rally that was organized by @UntilFreedom and Breonna’s Family.

‘It has now been more than THREE months since she was murdered by police in her own home and still no justice,’ he continued. ‘We must continue to speak out and speak up. For the rally, I wrote a poem dedicated to Breonna and Black Women everywhere. We Love you Breonna.’

Taylor’s family, hip hop artists and civil rights lawyers addressed the large crowd on the steps of the capitol to mark 100 days since she was killed. 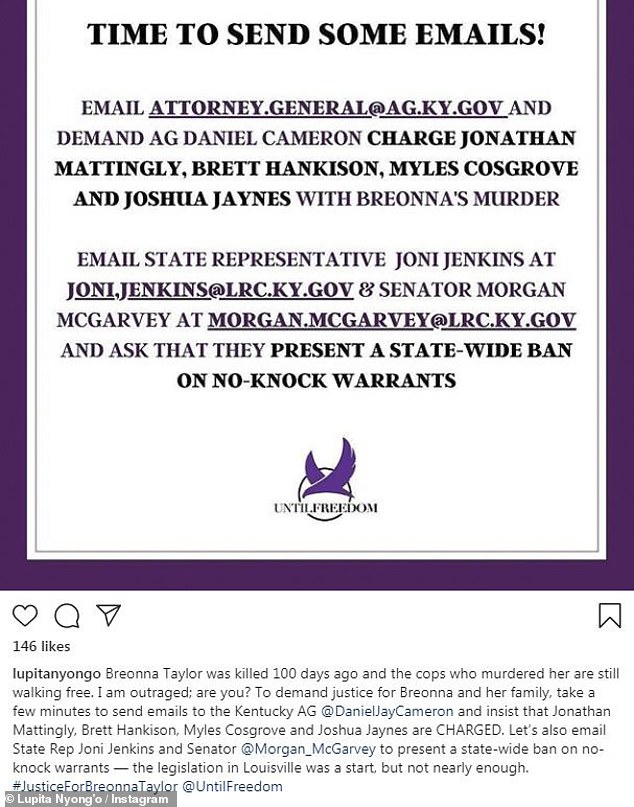 Impassioned: Lupita Nyong’o posted this call to action on Thursday, writing in the caption, ‘I am outraged; are you?’ 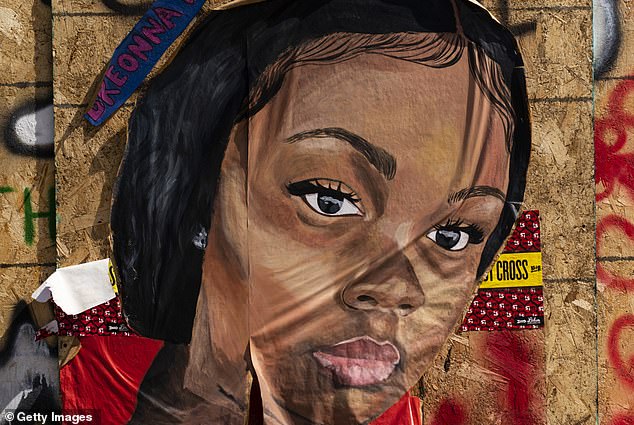 In Minneapolis: A portrait of Breonna Taylor is pasted to a building on Thursday as protests and calls for police reform have been ongoing across the country

On Thursday afternoon, Taylor’s mother Tamika Palmer thanked the crowd for their support for her daughter.

‘Without you all, I swear I don’t know where I would be right now, probably crying at home still by myself,’ Palmer said. ‘Know that she was full of love, full of life. Know that if it was one of you all, she would be out there [protesting].’

While Louisville police have fired one of the three detectives who served the warrant at Taylor’s home, protesters at demonstrations around the country as well as those on social media are demanding that the three be criminally charged.

Taylor was killed ‘in the sanctity of her own home,’ said civil rights lawyer Benjamin Crump, who is representing Taylor’s family, at the rally. ‘If you can´t be safe in your own home, where can you be safe?’ 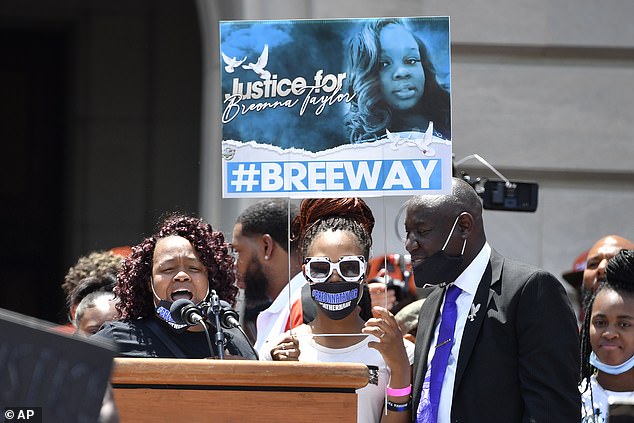 Grieving: Tamika Palmer (left), the mother of Breonna Taylor, addressed the crowd gathered on the steps of at the Kentucky State Capitol in Frankfort, Ky., on Thursday 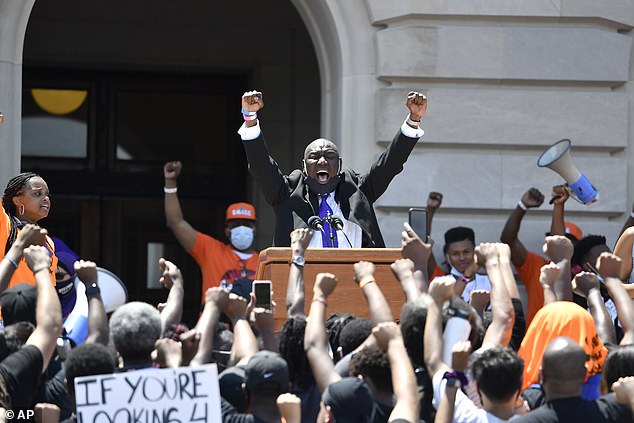 Speech: Taylor was killed ‘in the sanctity of her own home,’ said civil rights lawyer Benjamin Crump, who is representing Taylor’s family, at the rally

The rally was organized in the state capitol to call attention to Daniel Cameron, Kentucky’s first Black attorney general, whose office is reviewing the police investigation of the three officers. Many of the speakers urged Cameron to charge the officers Myles Cosgrove, Brett Hankison and Jonathan Mattingly.

Last week, Beyoncé wrote an open letter to Cameron, urging him to move swiftly. Cameron has urged patience while a large-scale probe is being carried out. The FBI is also investigating the shooting.

Walker, Taylor’s boyfriend, also appeared at the rally. Walker was originally charged with attempted murder after he fired a shot at one of the officers who came into the home. Walker has said he thought he was defending from an intruder.

The no-knock search warrant that allows police to enter without first announcing their presence was recently banned by Louisville’s Metro Council. 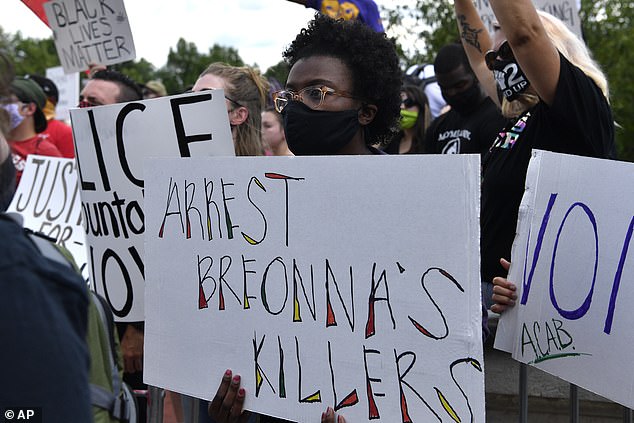 Clear message: The rally was organized in the state capitol to call attention to Daniel Cameron, Kentucky’s first Black attorney general, whose office is reviewing the police investigation of the three officers 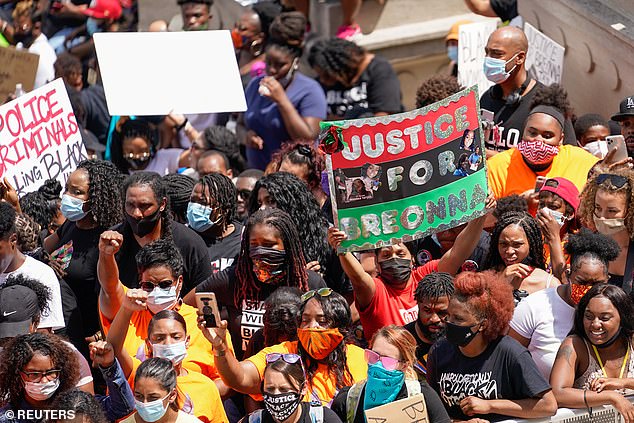 Taking a stand: Protestors gathered on Thursday, which was also one month to the day after the police killing of unarmed black man George Floyd in Minneapolis 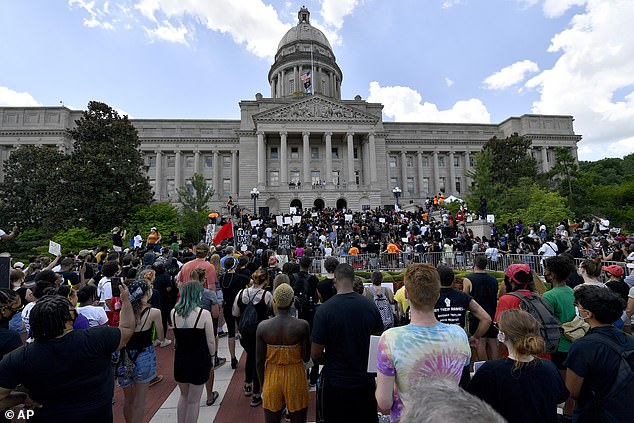 Some progress: The no-knock search warrant that allows police to enter without first announcing their presence was recently banned by Louisville’s Metro Council

'This is me': Mrs Hinch displays her scar from excess skin removal surgery 0