Jacqueline Jossa hosted an agony aunt session on her Instagram stories on Thursday, during which she helped fans with their relationship woes.The E


Jacqueline Jossa hosted an agony aunt session on her Instagram stories on Thursday, during which she helped fans with their relationship woes.

The EastEnders star, 27, dished out advice to some of her 2.8million followers on the photosharing site, with queries including help with escaping an unhappy marriage and tips on catching a cheating partner.

Her Q&A session comes after Jacqueline overcame her own struggles in her marriage to Dan Osborne, after the duo were plagued with infidelity claims and rumours of a rift and subsequent split in recent months. 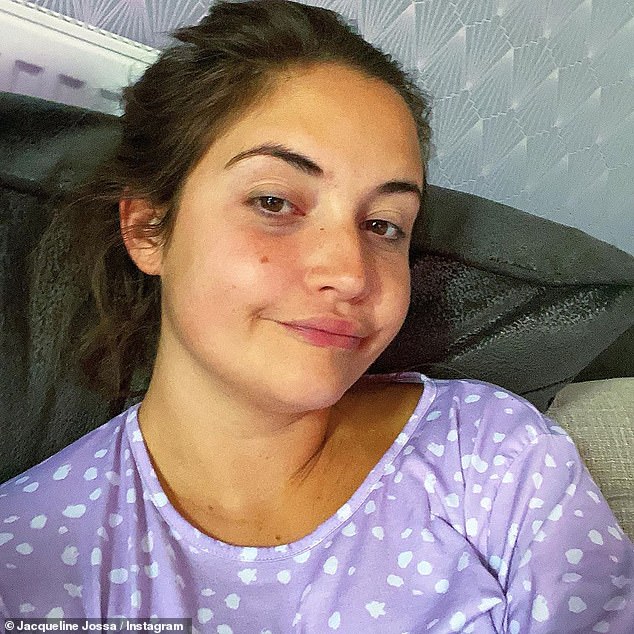 Helpful: Jacqueline Jossa hosted an agony aunt session on her Instagram stories on Thursday, during which she helped fans with their relationship woes

Jacqueline and Dan tied the knot in 2017 at Cheshire Manor House, two years after he proposed in Greece. They share daughters Ella, five and Mia, two.

The soap star did not directly reference the scandals in her latest videos, yet helped out a fan who admitted to concerns that their partner was playing away.

The fan wrote: ‘What should I do if I think my partner is cheating but I have?’ 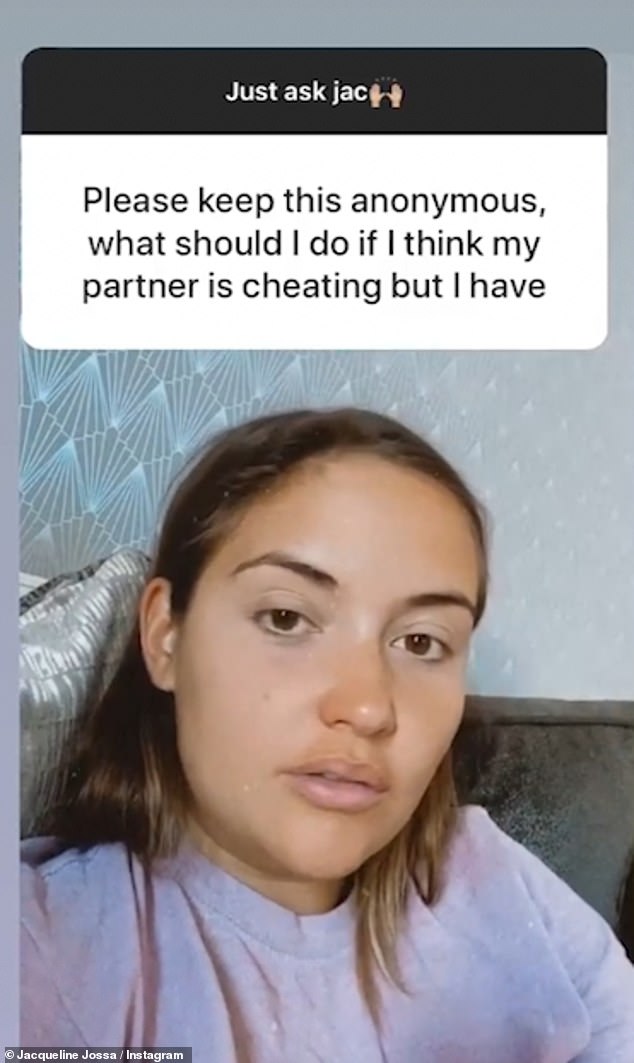 A helping hand: The EastEnders star, 27, dished out advice to some of her 2.8million followers on the photosharing site, with queries including help with escaping an unhappy marriage and tips on catching a cheating partner

Jacqueline said: ‘You could do some spying I suppose or could just cut to the chase and ask him. But its not I did this so you did that and tit for tat. just because you made a mistake it doesn’t mean he’s allowed to.’

Elsewhere, in an emotional plea, one of Jacqueline’s followers penned: ‘I really want to leave my partner but I have no money and we have two kids.’

The query seemed to touch Jacqueline as she said: ‘This one makes me totally totally sad. I think you have to find a way to make it happen if you’re not happy… 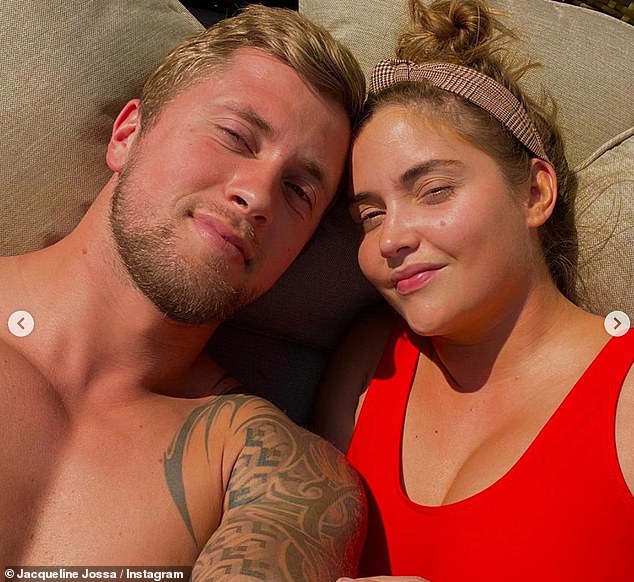 Tough: Her Q&A session comes after Jacqueline overcame her own struggles in her marriage to Dan Osborne, after the duo were plagued with infidelity claims and rumours of a rift and subsequent split in recent months

‘I’m sure you have many people who love you. Open up. It won’t be the end of your life. You’ll be able to smile again. If you’re not happy and you’re in a really unhappy relationship, you shouldn’t wait. Start something for you…

‘It’s really great either way whether you’re happy or not, you have something for you so you never feel stuck, create a business or find a way to make your own money. Start a business so you’re never in that position again.’

When a fan revealed she did not feel supported by her husband, Jacqueline said: ‘Your husband has to support your business. Like I said, You need your own money. You need your own passion and outlet and something that makes you happy.’

When asked: ‘How do I stop feeling mum guilt?’, Jacqueline said: ‘We all suffer with mum guilt. You have to be your best self to be the best mother you can be 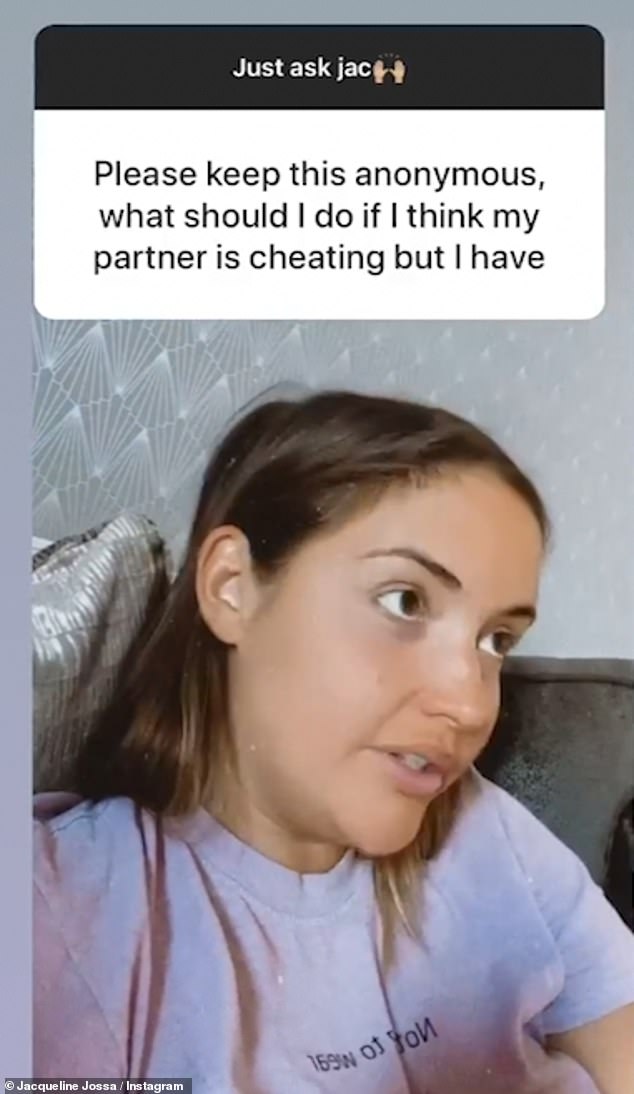 Help me out! She was assisting concerned fans with her outreach

One of her fans sought Jacqueline’s advice as they work with their ex. to which she offered her help saying: ‘[That’s] super awkward. Think if you love your job and would you quit if you didn’t work with him?’

Back in May, it was reported that Dan ‘begged’ Jacqueline to return to their marital home after she moved out amid their marriage issues. She revealed she had moved back into their abode part-time amid claims they had been ‘fighting non-stop’.

It was then reported that Dan ‘begged’ Jacqueline to come home and she is adamant they can ‘make it work’ as they make a ‘good team’.

The actress was said to have missed her husband and wants to take things ‘really slowly’ now she has returned part-time. She will split her time between their marital home and her parents’ house. 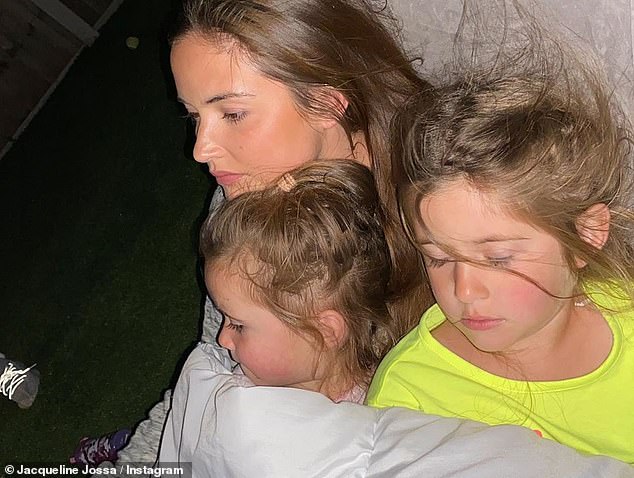 Her loves: Jacqueline and Dan tied the knot in 2017 at Cheshire Manor House, two years after he proposed in Greece. They share daughters Ella, five and Mia, two

A source said: ‘Dan begged her to come home and she’s admitted she missed him. They had been fighting non-stop but together they make a good team. It won’t be easy but Jacqueline’s sure they can make it work. She wants to take it slowly.’

MailOnline contacted Jacqueline and Dan’s reps for comment at the time.

The couple’s relationship has been plagued with cheating allegations and tensions between the pair have reportedly been taking their toll.

But Jacqueline recently took to Instagram to clear up the rumours, stating: ‘I need some time. There is no split. No divorce. We are working together not against each other’, before she returned to their home, where they now remain. 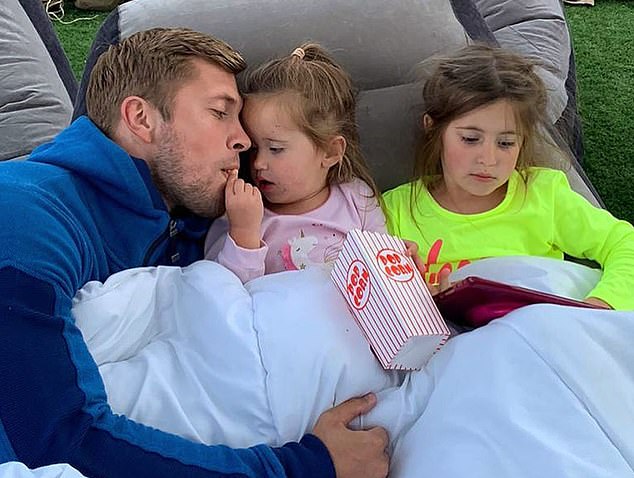 Great dad: Dan and Jacqueline are back living under the same roof

It has been suggested that Jacqueline and Dan will ‘reassess’ their relationship once the lockdown period is over and normality resumes.

The couple were thought to be giving their romance a fresh start after Dan apologised for doing things he wasn’t proud of in the relationship.

Dan lamented his past behaviour, which he did not specify, in a candid post reflecting on the last decade and seemingly referencing his recent cheating scandal.

2013: Jacqueline and Dan spark up a romance after meeting at an awards ceremony, while his ex Megan Tomlin is still pregnant with his son Teddy

June 2015: Dan proposes to Jacqueline on a romantic getaway to Greece

June 2017: Jacqueline and Dan tie the knot at Cheshire Manor House with many of her EastEnders co-stars in attendance

April 2018: Jacqueline and Dan briefly separate after he is accused of cheating with Love Island’s Gabby Allen, which they both deny

May 2018: The couple announce the birth of their second child Mia

March 2019: Dan is hit by claims he kissed Love Island’s Alexandra Cane in a nightclub, which both denied

December 2019: Dan apologised to Jacqueline for mistakes that ‘almost cost his marriage’ in a lengthy social media post after they reunited following her winning stint in the I’m A Celebrity jungle

January 2020: The couple’s romance seems to be back on track as they jet to Dubai for a romantic getaway

May 2020: Jacqueline announces a break from social media, days before reports she and Dan have split

High blood pressure: The major warning sign which lies in a sensation in your head 0

CNN avoids on-air coverage of Biden's 'Are you a junkie?' remark about taking a cognitive test 0

Michelle Bridges shares an uplifting selfie with her son Axel, four, amid woes 0

Kilmeade rips Fauci as COVID cases rise in parts of US: 'How much more sacrifice do we have to make?' 0