The campmates were warned not to use any bad language because they were live on ITV for their Love Island themed trial, but the 56-year-old clearly forgot.

As he got ready for the challenge, he could be heard saying “where is my s**t”.

While the hosts Ant and Dec didn’t seem to hear his expletive, those watching at home did and they took to Twitter to discuss it.

One person shared a gif of someone looking shocked and wrote: “When it’s live and you hear Ian swear #ImACeleb #imaceleb #imacelebrity.”

Another tweeted the amusing exchange: ” ‘You are live on #ImACeleb, please do not swear’ Ian Wright: Ok, where’s my s**t man???” 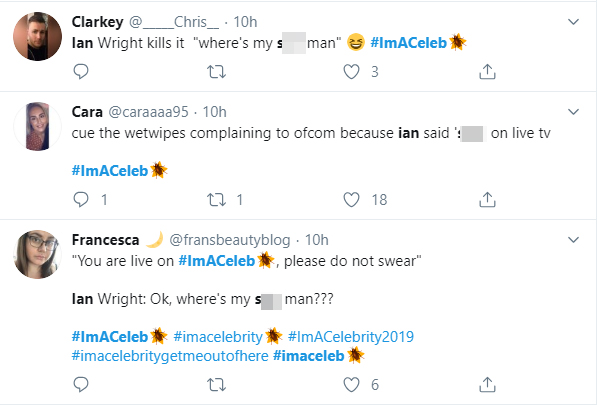 While someone else added: “‘Where’s my s**t man’ Ian Wright is killin me on this show #ImACeleb.”

Meanwhile it was a dramatic episode for Ian as viewers saw him undertake not one but two trials.

In the first one the terrified sports star had to crawl into a series of tunnels full of water and various creatures – such as water dragons and crocodiles.

The second one saw him down a glass of blended pig’s penis in an attempt to win a Sunday lunch, which he didn’t end up getting.

And he was embroiled in the first proper row of the series as Andrew Maxwell accused him of shouting at him.

Most Read In TV & Showbiz


Nicole Scherzinger, 41, shows off incredible abs as she parties with Thom Evans

Tensions were high as everyone was asked to order the campmates from one to 12, with the higher numbers making it more likely they will be awarded a roast dinner in the live Bushtucker Trial.

However, after the heated debate, Andrew told Jacqueline he didn’t like the way Ian kept speaking to him.

Andrew then stood up and said: “You keep shouting at me Ian.”

Ian replied: “Who is shouting, when did I shout?” Andrew says: “Just then.”

Ian then snapped: “What are you talking about, I didn’t shout at you.”

Andrew then said he was tired and couldn’t remember what had been said.

He decided to apologise to a baffled Ian and said: “You’re my pal and I’m just really sensitive.”

Huntingdon races live: Trackman has the latest betting, news and results from Huntingdon on Friday afternoon

9am Arsenal news LIVE: Arteta keen to be next manager, Tottenham and Man Utd...

Comic Ben Miller says parents MUST read to their kids as he backs our...

You can weigh in on Fat Bear Week

Katie Price turns to psychic Sally Morgan to help her find love – and...

KATIE Price has called in celeb pal Sally Morgan in a desperate attempt to find out what the future holds for her love...

Huntingdon races live: Trackman has the latest betting, news and results from Huntingdon on...

HUNTINGDON stages a cracking seven-race card this afternoon, featuring the Listed Lady Protectress Mares’ Chase. As ever, our man on the ground Trackman will...

MANCHESTER UNITED are set to make a last-ditch attempt to persuade Angel Gomes to a sign new treble-your-money contract. The 19-year-old attacking midfielder is...

The new details about alleged Iranian ties to the American Herald Tribune shed light on how the country has attempted to run a...

THE deadly coronavirus which has killed 26 people in China could’ve jumped from bat soup to humans, experts have claimed. Scientists in China believe...

Three parent fertility ‘not as ethically horrific as it sounds’

Katie Price turns to psychic Sally Morgan to help her find love – and...

Huntingdon races live: Trackman has the latest betting, news and results from Huntingdon on...