Home News ‘I felt like a human fireball, I could see my own skeleton...

AS a nuclear bomb exploded into the heavens, RAF squadron leader Erin Danson fired up his plane, took a deep breath and disappeared into the mushroom of toxic smoke.

The year was 1958, and Danson’s job was to test the radiation levels of the 1958 bomb Grapple Y – Britain’s largest ever atomic blast – by flying into the middle of it while carrying an x-ray.

Aged just 26, he’d been told it was a safe mission – but within hours of landing he began violently vomiting.

Weeks later painful rashes appeared on his chest and he became crippled by searing headaches and depression.

Eighteen years later, he took his own life – leaving behind his wife and four children.

The veteran is just one of the 20,000 brave British servicemen who were used as “guinea pigs” to test radiation levels during the Cold War.

What is a nuclear bomb and how do they work?

Atomic bombs are weapons of mass destruction, and are produced by nuclear fission.

This is when the nucleus of an atom is split into two smaller fragments by a neutron, usually by using isotopes of uraniaum or plutonium.

Hydrogen bombs, meanwhile, are made by fusing together two smaller atoms (nuclear fusion), and are more powerful than atomic bombs.

If used, nuclear weapons are incredibly destructive, reaching temperatures of several million degrees centigrade at their core and spreading over huge areas.

Those affected who are not instantly vapourised can be crippled by the radiation over decades.

Atomic bombs were most famously used in Hiroshima and Nagasaki, Japan, at the end of the Second World War, killing between 129,000 and 226,000 people.

As the UK raced to become a nuclear superpower, countless soldiers who had been involved in tests were struck by cancer and blood disorders after being forced to fly, sail and crawl through contaminated sites with barely any protection.

Yet their bravery has never been acknowledged.

Shockingly, the trauma is still being felt today – by the soldiers’ children and grandchildren.

Around 155,000 descendants of those contaminated are suffering from illnesses such as breathing problems, infertility, repeated miscarriages and severe birth defects like heart and spinal deformities.

‘You could see your bones through your skin’

The most infamous British blasts were carried out off the coast of Australia in the late 1950s.

Lured by the promise of exotic postings, troops were sent on dangerous nuclear missions with no idea of the risks they’d be taking.

Fearing the loss of its international power after World War Two, Britain had embarked on a quest to build the nuclear bomb.

Codenamed High Explosive Research, it started with the UK’s first successful mission, Operation Hurricane, in 1952, and led to a series of four groundbreaking tests called Operation Grapple between 1957 and 1958.

While pilots like Danson were ordered to fly into mushroom clouds with X-ray badges to test radiation levels, others were stationed at sea – with the rate of damage found in 2007 to be the same as the Chernobyl clean-up team.

“It was utter devastation,” David Hemsley, who was just 18 when he witnessed his first test, told Vice.

Being so close to the explosions, he explained, could turn your skin translucent “like x-rays”.

“If I was looking at you now, I would see all your bones. All I saw was this rising, colossal fireball going up and thunder, lightning, you name it.

“I think it was too much for some people—some of them were crying, asking for their mum.”

All I saw was this rising, colossal fireball going up and thunder, lightning, you name it

During the notorious Castle Bravo detonation in March 1954, sailors were told they would be observing from a safe distance – with some dressed in little more than sandals and shorts.

However, an unexpected reaction meant the power of the blast was more than double what scientists had expected.

The crew were suddenly left facing “the end of the world” as orange clouds hung above them, fireballs screaming into the ocean below.

Though they survived the ordeal, in years to come many saw their children ravaged by disease and early death.

On the ground, meanwhile, the clean-up operation saw troops having to crawl through heavily-contaminated sites to collect precious equipment.

Raymond Webber, 81, recalls the shocking health and safety lapses he experienced as a 21-year-old driving into detonation areas on Christmas Island, near Indonesia.

He told the Mirror: “It was a huge truck, kicked up tons of dust and we had the windows down because it was so hot.

“When we left there was a mobile decontamination point that they had to go through, and they had shower after shower because their readings kept showing radiation.

“They washed me down too but we all put our uniforms back on, which must have been contaminated.”

For the estimated 1,500 “guinea pigs” who have survived to this day, life has come at a price.

Bob Fleming was an RAF serviceman when he witnessed a detonation in 1956. Now 83, he fears his family has a “genetic curse” – with sixteen of his 21 descendants suffering from health problems.

His youngest daughter, Susanne Ward, who has severe breathing problems and whose teeth fell out prematurely, told the BBC :“It just gets worse as the next generation comes along.

“Our grandchildren have similar problems. My dad blames himself, but it isn’t his fault.”

Derek Hickman, who was drafted in for Operation Hurricane, Britain’s first atomic bomb, says the job cost him his marriage after rendering him infertile.

He told the Mirror: “My wife wanted children and in the end I walked away from the marriage. She never blamed me but I’ve regretted it ever since. It’s always there at the back of my mind.”

Most Read in News

ROOM WITH A VIEW

HOW DID SHE LIVE?

In the USA, 45,000 survivors were awarded £2billion in compensation, but the UK government has so far refused to pay out.

A new policy announced by Labour this week would award ex-servicemen £50,000 each in compensation.

Campaigners like Mr Fleming have called for DNA testing to prove the link between the tests and soldiers’ deteriorating health, while Mr Danson’s widow Shirley and the British Nuclear Test Veterans’ Association continue to call for justice.

However, a 2012 bid was struck out in the Supreme Court after veterans were told there would be great difficulty in proving a link between their illnesses and the tests.

Their hunt for recognition after decades of pain goes on.

The tense history of the nuclear arms race 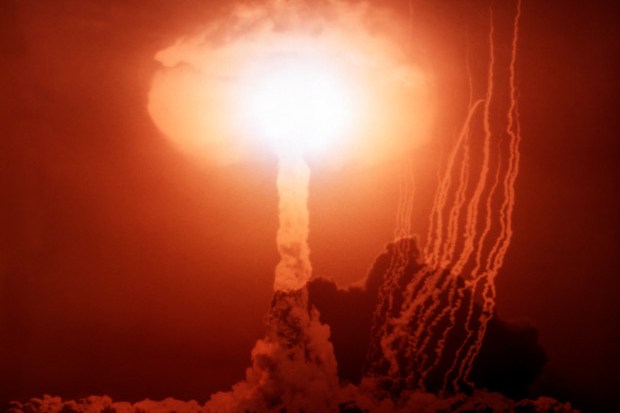 The arms race began after the US exploded two nuclear bombs over Japan to end World War Two.

But it really got under way when the Soviet Union exploded its first bomb in 1949.

Washington then stepped up its development of nukes, exploding a much more powerful “thermonuclear” weapon over the Pacific atoll of Eniwetak in 1952.

The Soviets exploded their own version in 1955.

By the 1960s each side had enough nukes — and missiles to launch them — to create a sitation chillingly known as Mutually Assured Destruction (MAD).

Should one side attack, the other would strike back and cause equal destruction.

The prospect of this arguably acted as a deterrent throughout the Cold War.

Still, the risk to the world was deemed too great. So in 1972 the United States and the Soviet Union signed the first comprehensive nuclear arms reduction treaty.

The most significant agreement, which is widely thought to have ended the Cold War, was the 1987 Intermediate-range Nuclear Forces Treaty (INF).

The treaty bans land-based missiles with a range between 310 and 3,400 miles..

Essentially this ended the threat of a surprise attack as either side would have little warning.

The two countries were allowed to inspect each other’s installations.

Veterans on Christmas Island, where troops were sent into heavily-contaminated areas in trucks with the windows open[/caption]

I’m A Celebrity 2019 catch up: What happened in the jungle last night?

Air Force fronts up to Iran threat with huge display of fighter force as...

WWE legend Paige says it’s bittersweet for her that fans want her to return...

WWE legend Paige has poured cold water on the rumours that she could be about to make a shock return to wrestling at...

Alexa Chung reveals she met Next in Fashion co-star Tan France when she was...

ALEXA Chung described the hilarious moment she met new co-star Tan France when she was sozzled and “screamed in his face.” She gave the...

THE Royal Rumble is here this weekend! WWE starts the year with a bang with their annual men’s and women’s over-the-top-rope extravaganzas to see...

It came as more cities were locked down and Lunar New Year celebrations cancelled. The first 17 killed were 13 men and four women,...

The eyes of punters will be on Cheltenham on Saturday, but they’d be wise to at least keep one on Town Moor. The Sky...

Harrowing footage shows ‘starving pigs eating each other alive’ at a...

WWE legend Paige says it’s bittersweet for her that fans want her to return...

Alexa Chung reveals she met Next in Fashion co-star Tan France when she was...