A SUPER TYPHOON could rip through England’s Pool C decider against France — and turn the Rugby World Cup upside down.

Weather bomb Hagibis has been upgraded from a tropical storm into a Category 5 super typhoon, with winds of up to 160mph. 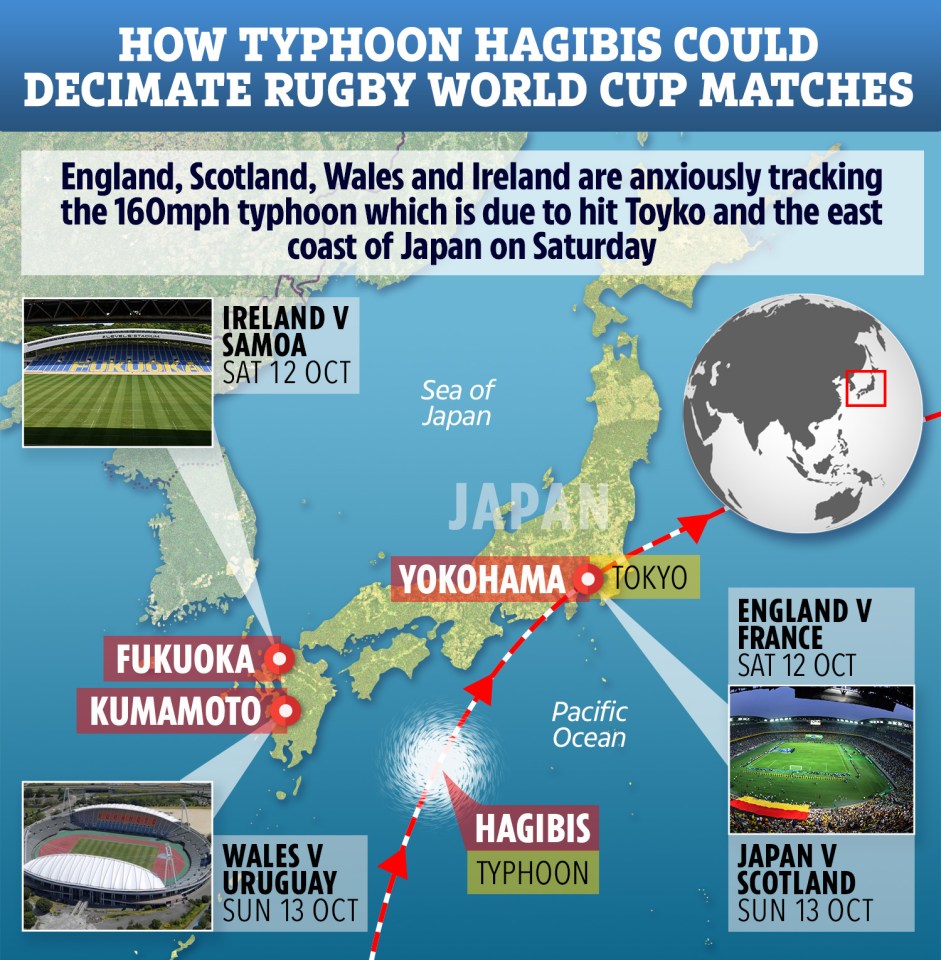 After becoming one of the most dramatic intensifications of tropical cyclones since records began, Hagibis is due to smash its way through Tokyo on the weekend.

Initially it was due to threaten Ireland’s crunch fixture against Samoa in Fukuoka on Saturday.

But the predicted path has swung east and as it stands it is due to hit the capital and Yokohama where England are playing on Saturday.

If the game is called off then it will be marked down as a scoreless draw.

But with Pool C toppers England and Les Bleus already through, it would have no impact on the standings.

However, an unlikely scenario with Hagibis could put huge pressure on Wales to score a bonus point win against Fiji on Wednesday.

If their final game with Uruguay is called off and declared a 0-0 draw, they could be in a situation where two teams have the same points in Pool D, but Australia win the pool on points difference in games.

And if the Dragons fail to score a bonus point against Fiji and their final game is called off, they will almost certainly finish second in the pool.

It would bump Wales into second, meaning they would face Eddie Jones’ Red Rose in the quarter finals.

Currently, Kumamoto Stadium, where Wales play Uruguay, is expected to be OK. 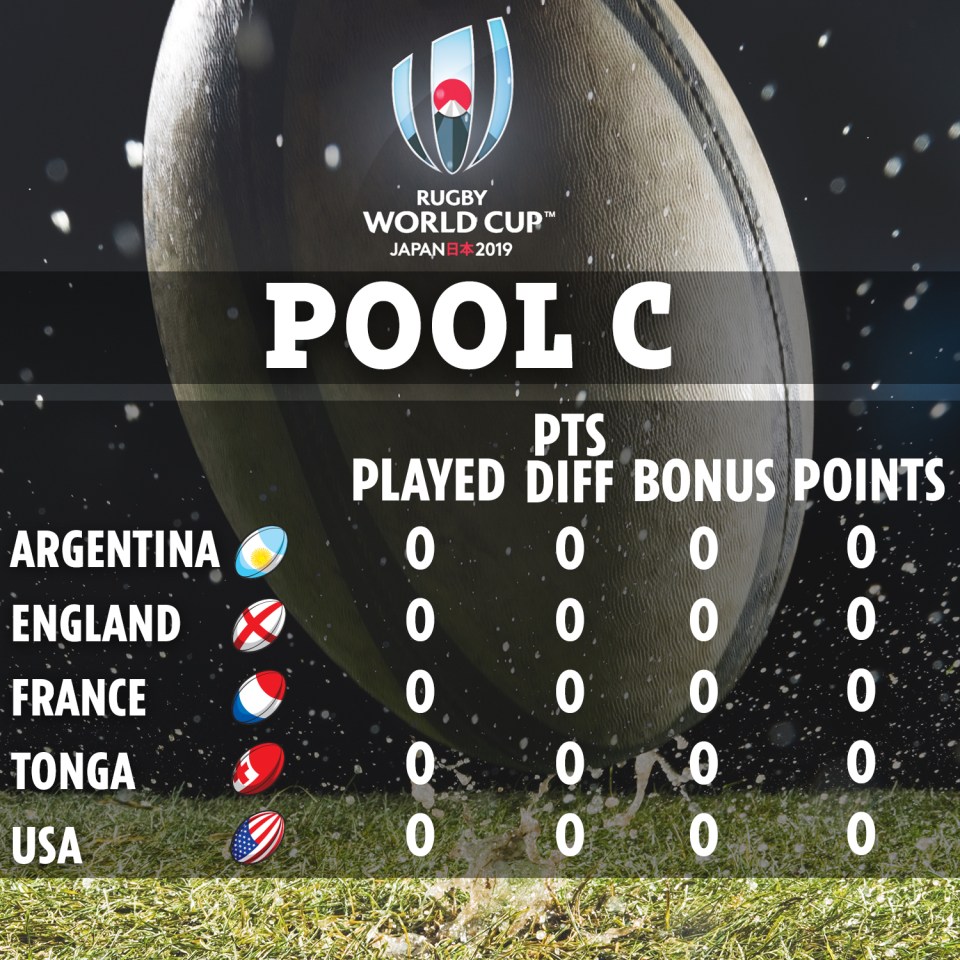 Left: Typhoon Faxai, which left a million homes in Japan without power for weeks, just a month ago

England attack coach Scott Wisemantel said: “We have no control over the weather and we have to prepare for the game and see how it goes.

“Regarding the permutation around the game and shared points, we are just concentrating on playing to win.”

“One thing I have learnt in Japan is that they prepare for the worst and then usually it doesn’t eventuate.”

Tournament organisers World Rugby are expected to give an update on the weather problems later tonight.

But late on Monday they said: “We are monitoring Typhoon Hagibis, which is currently developing off the south coast of Japan.

“The latest modelling from our weather information experts and the Japan Meteorological Agency, indicates that the typhoon is tracking in a north-westerly direction and could bring high winds and heavy rain to southern Japan on 12 and 13 October.


Utd unravelling, Ole has hairdryer on full blast but team don't get his plan


The Prem table if VAR errors hadn't cheated Utd, City, Spurs and Co out of points

KING OF THE RING

GIFT OF THE GAB

“While it is too early to determine the exact trajectory and impact, if any, of the typhoon at this early stage, as per previous typhoon warnings, we have a robust contingency programme in place in the event adverse weather looks likely to impact fixtures.

“We will continue to closely monitor this developing situation in partnership with our weather information experts, local authorities, transport providers and the teams, and will provide a further update tomorrow.

“Fans are advised to monitor official Rugby World Cup channels for any updates.” 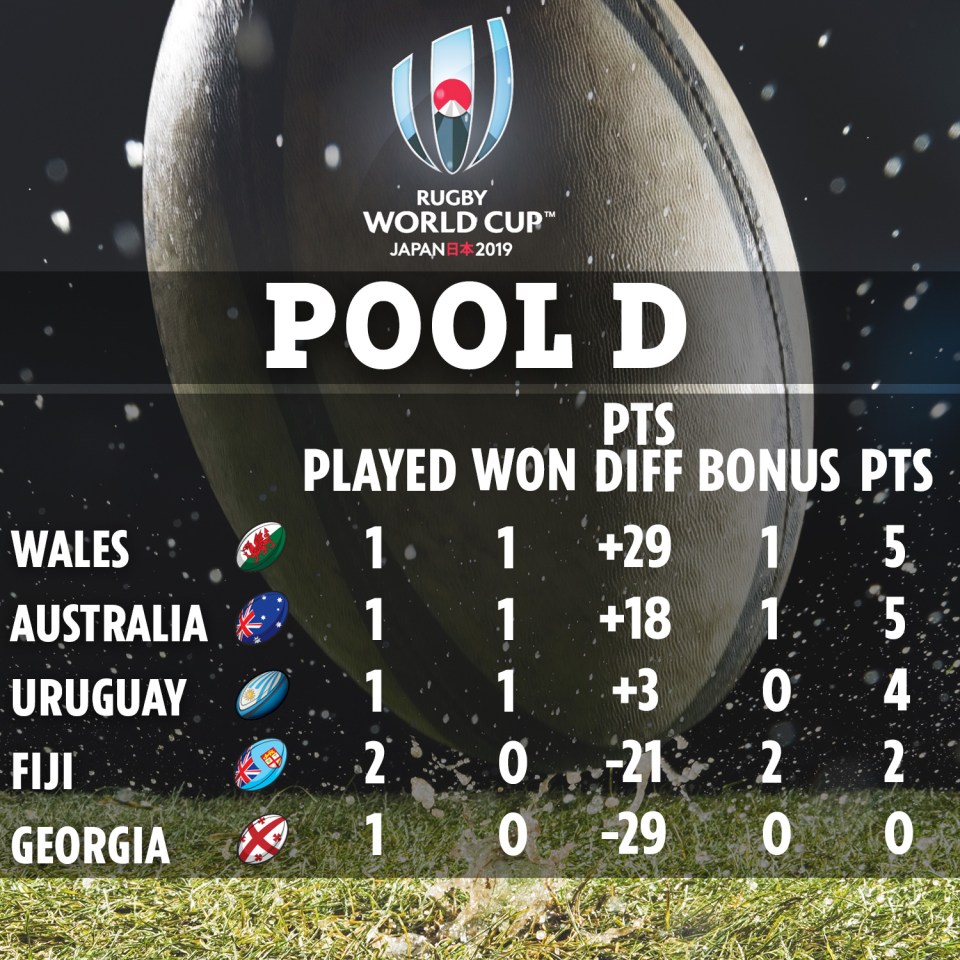 ‘Neo-Nazi’ soldier, 27, who ‘recruited for hate group’s “race war”‘ arrested with two others ahead of Virginia gun rally

More than 200 terror suspects and extremists could be banned from cities such as...

Meghan Markle and Prince Harry ‘clash with Palace over big-money deals’ and talks could...

PRINCE Harry and Meghan Markle’s getaway deal is expected to “take up to six months to get over the line” according to sources. Senior...

Chelsea verdict: Blues have no defence during brutal cross examination in...

What does impeachment mean and which US presidents have been impeached?