Holly Hagan has lashed out at weight loss jabs while recounting her less-than-satisfactory experiences with the product.The Geordie Shore star, 27,


Holly Hagan has lashed out at weight loss jabs while recounting her less-than-satisfactory experiences with the product.

The Geordie Shore star, 27, took to her Instagram account on Wednesday to speak candidly about the pens, as she vowed never to promote them on social media.

Admitting that she resorted to using the pens back in 2018 because she was ‘desperate’ to lose weight, Holly revealed she’d spent more than £1,000 on them. 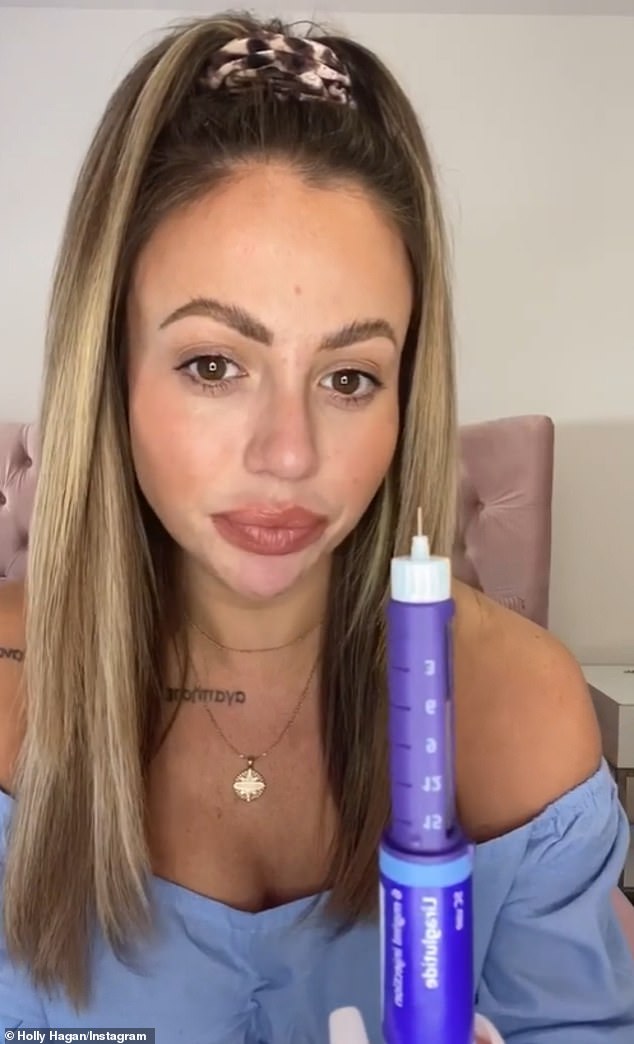 Captioning the nine-minute video, she said: ‘Back in 2018 I found out about these skinny pens. I was asked to promote them multiple times for free pens worth £250 each but it wasn’t something I felt comfortable promoting.

‘So instead I paid and spent over 1000 pound desperately hoping this was going to be the weight loss secret I’d been hoping for. Spoiler alert.. it wasn’t.

‘Not only are these companies actively seeking out young vulnerable girls with weight issues on social media, they are offering these products totally free in exchange for reviews.

‘This is a dream come true for young girls with self esteem issues who cannot afford £250 per pen. I have confirmation that these pens are being prescribed to my own friends with a bmi of 22!’

Directing her followers to sign a petition linked to her profile, she concluded: ‘We must call out these companies there is not enough regulation around things like this and it is so damaging to people’s mental and physical health.’

In her video, the reality star declined to directly name the company whose jabs she used, but she did reveal that it contained Saxenda, the commercial name of Liraglutide, used to treat type two diabetics and those with a BMI of 27 and over.

Of the first she used it, she said: ‘Instantly I noticed I felt really sick and I didn’t want to eat so for me at the time I thought oh my god this is absolutely amazing, this is something that is going to make me stop eating.’ 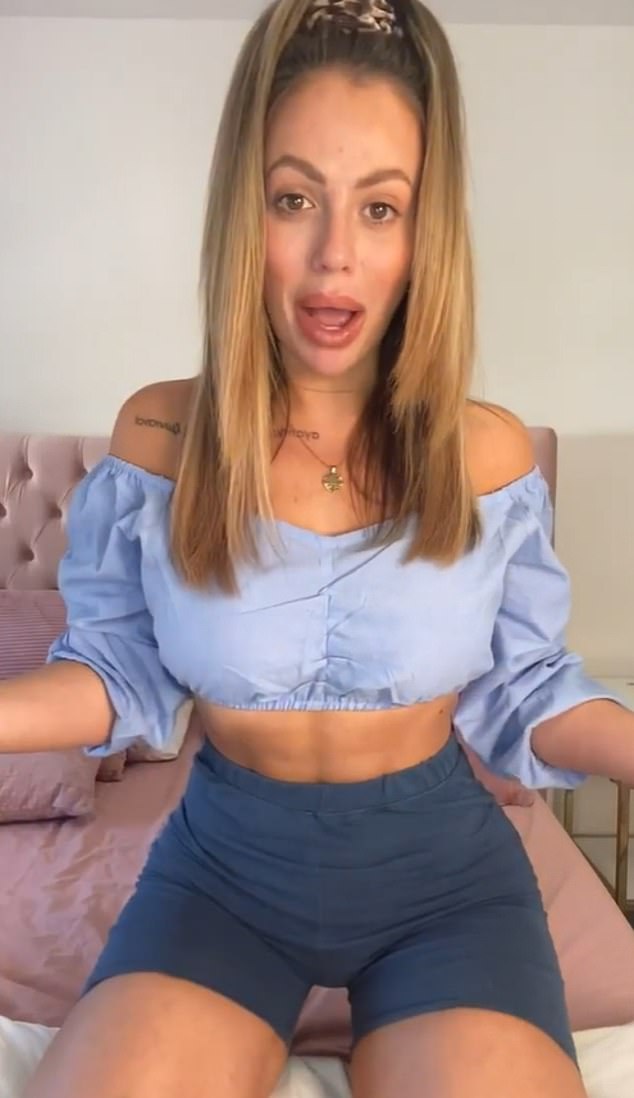 However, after losing three pounds, she found that she was gradually increasing her dose until she was at the maximum. She then started to take two injections a day.

She recalled: ‘I’m injecting copious amounts of this stuff, I’m sometimes injecting it twice a day to try and get the same hit as day one, and it just wasn’t working for me anymore.’

After she stopped taking the jabs, she said that she was contacted by SkinnyJab to promote them on social media, in exchange for free product.

While she said that she refused their offer, the company has been promoted by such celebrities as Gemma Collins and Kerry Katona.

But Holly is now insisting that her followers no the downsides of using such products, particularly with so many impressionable youngsters on social media.

‘That’s dangerous and the fact that celebrities are endorsing this and it’s being allowed to be promoted on social media and Instagram where young girls can actually see it it’s horrendous.’

Of the firms selling the pens, she continued: ‘They’re looking for people who have got problems who are desperate and that’s what I was at the time.

‘I was completely desperate to lose weight and I thought being thin would be the thing that made people stop trolling me.’ 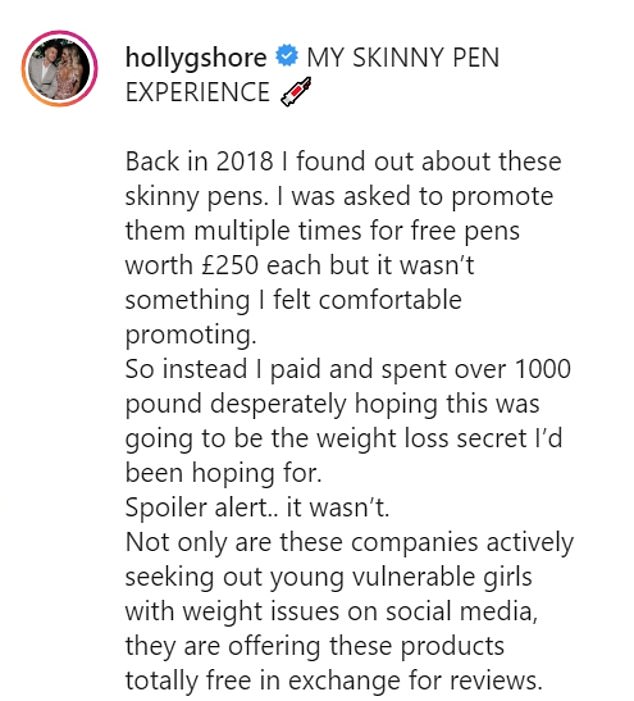 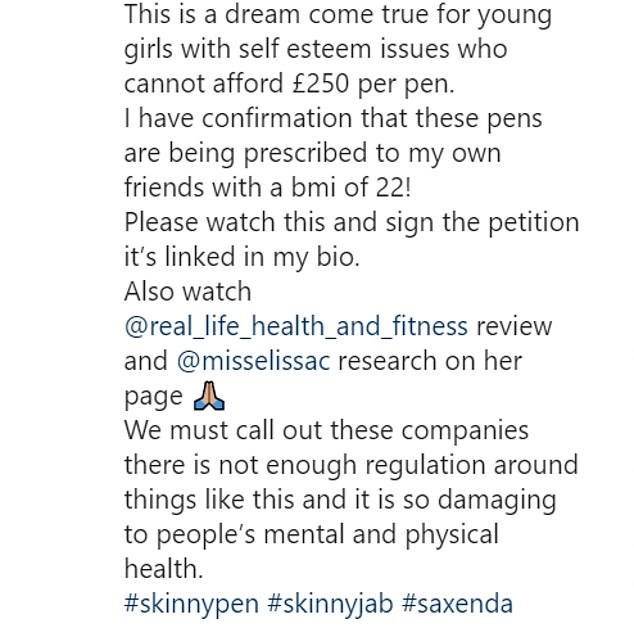 She concluded: ‘If I can stop somebody going through the absolute torture of the last ten years I’ve had then that’s worth it to me.’

MailOnline has contacted a representative for SkinnyJab for comment.

Holly’s impassioned post comes weeks after she reflected on her quick fix cosmetic procedures, as she shared a series of posts about her body image.

In an Instagram Q&A, she spoke candidly about her journey to self acceptance, confessing that although she has no regrets, she is in a better place now. 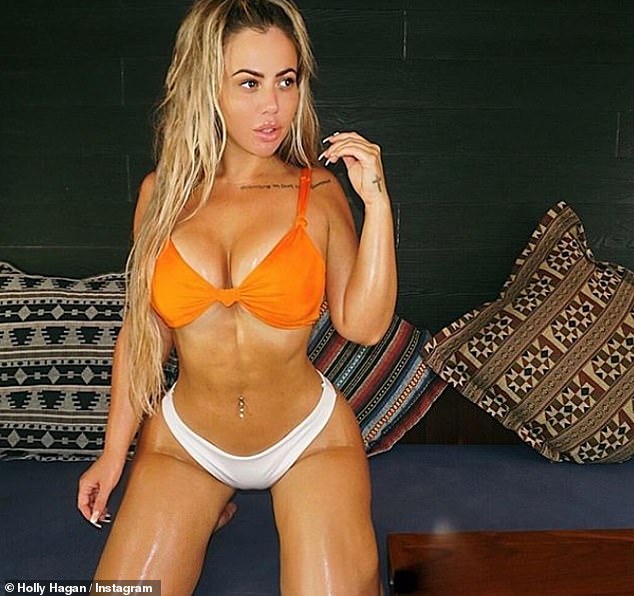 Speaking out: Holly Hagan reflected on her quick fix cosmetic procedures on Tuesday, as she shared a series of posts about her body image

Asked how she copes with ‘not feeling good enough’, Holly mused: ‘I found it really hard.

‘Throughout the early years of GShore I was always told I wasn’t a “worldie” and it sticks in my head the boys constantly looking out for “worldie” girls. They would describe them and they’d be the opposite to me.

‘I spent so many years just desperate to be classed as one for the approval of boys. It’s so sad that I based my worth off that.’

Holly was just 18 years old when she made her debut on MTV party show Geordie Shore in 2011. 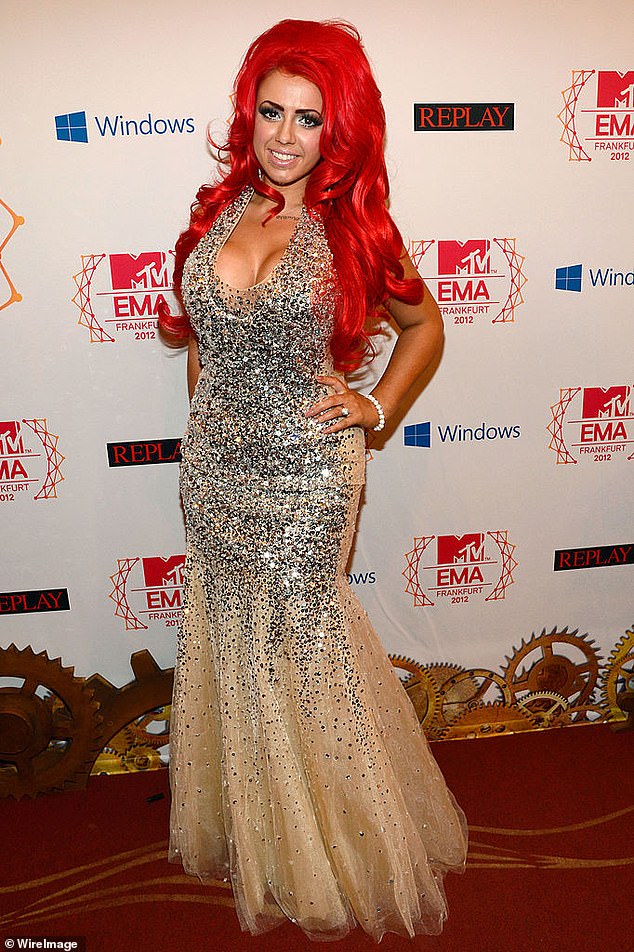 Party girl: Holly was just 18 years old when she made her debut on Geordie Shore in 2011. She joined the cast after having a boob job and went on to have more cosmetic procedures

The reality star joined the cast shortly after having a boob job, and proudly boasted in the opening credits, ‘I’m fit, I’m flirty and I’ve got double Fs.’

Asked how her love of cosmetic surgery affected her mindset, Holly revealed: ‘Surgery made my body image 1000 x worse. I went in with the expectations that I was going to finally be happy and have the perfect body after.

‘Not only have I end up heavier than I’ve ever been after two months, but I was twice as wide too. I looked awful and it was upsetting.

‘I had so much guilt and shame that I spent so much money and looked worse than before.’ 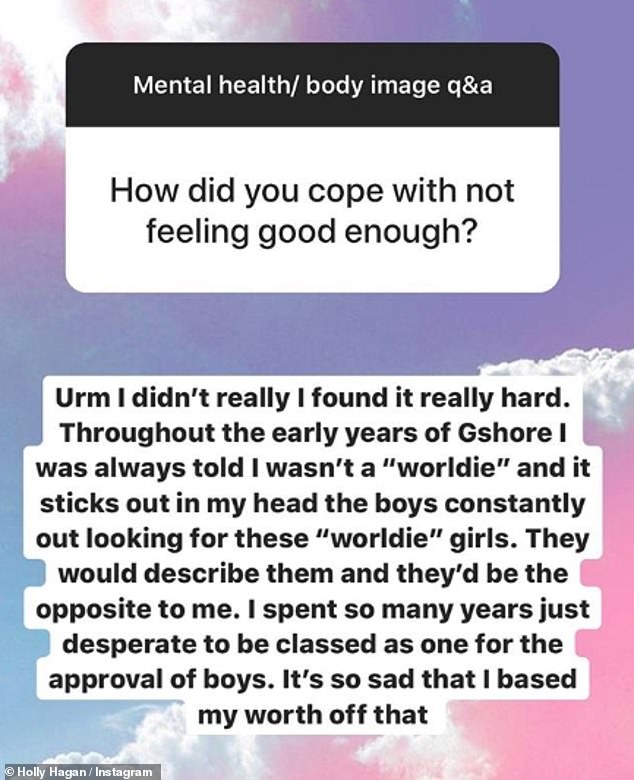 Candid: In an Instagram Q&A, the Geordie Shore star, 27, spoke candidly about her journey to self acceptance, confessing that although she has no regrets, she is in a better place now 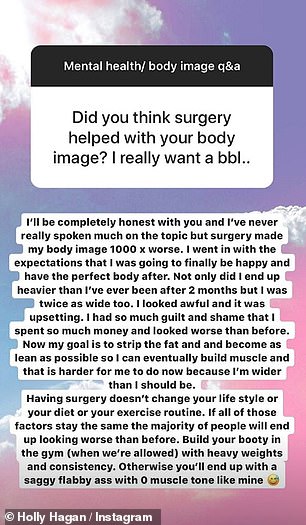 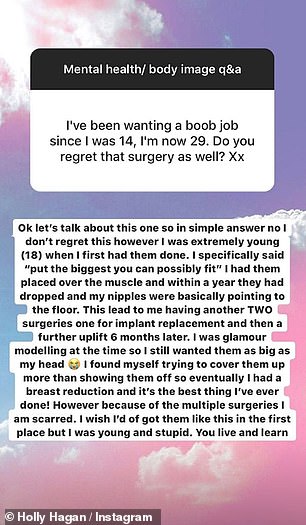 Candid: Holly has had lip fillers, Botox injections, breast operations, jaw fillers, nose fillers and a non-surgical bum lift and spoke about her decision to go under the knife

She continued: ‘Now my goal is to strip the fat and become as lean as possible so I can eventually build muscle and that is harder for me to do now because I’m wider than I should be.

‘Having surgery doesn’t change your lifestyle or your diet or exercise routine. If all of those factors stay the same, the majority of people will end up looking worse than before.’

Holly has left many of her fans in awe with her new figure after ramping up her fitness regime.

This time around, Holly has lost the weight safely, after years of yo-yo dieting and looking to quick fixes. 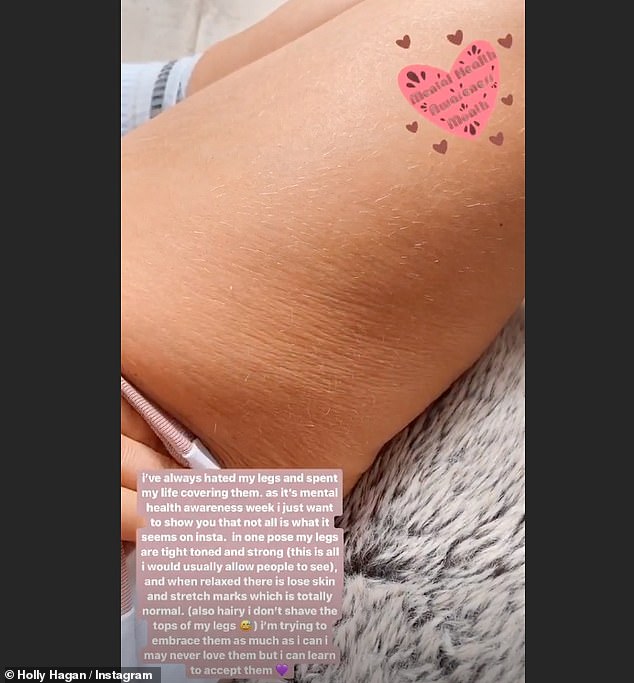 Confession: Holly has left many of her fans in awe with her incredible new figure after ramping up her fitness regime but admitted she still has her own hang-ups 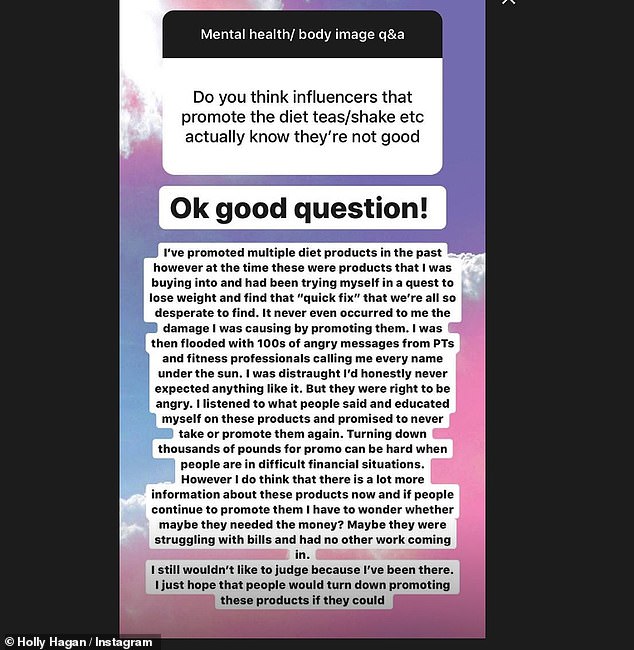 No more: This time around, Holly has lost the weight safely, after years of yo-yo dieting and looking to quick fixes, and has vowed not to slip back to bad habits

Asked about influencers that plug diet teas and shakes, that many body confidence campaigners have labelled harmful, Holly mused: ‘I’ve promoted multiple diet products in the past.

‘However at the time these were products I was buying into and had been trying myself in a quest to lose weight and find that “quick fix” that we’re all so desperate to find.

‘It never even occurred to me the damage I was causing by promoting them.

‘I was then flooded by 100s of angry messages from PTs and fitness professionals calling me every name under the sun. I was distraught I’d honestly never expected anything like it.

‘But they were right to be angry. I listened to what people said and educated myself on these products and promised to never take or promote them again’.

Holly found fame in the inaugural series of Geordie Shore back in 2011 and remained a cast member until 2016, later making cameo appearances.

The former call centre girl is now engaged to footballer boyfriend Jacob Blyth and the couple plan to wed in Ibiza before starting a family. 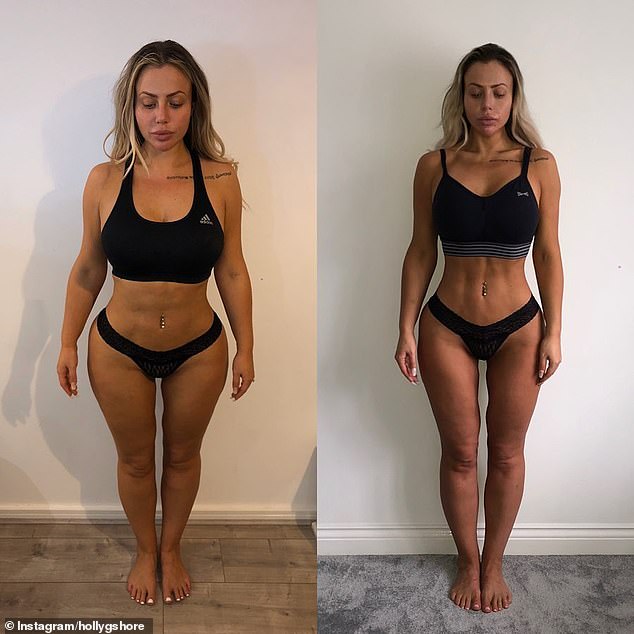 Overhaul: Holly has been showing off her body transformation after looking at sensible ways to change her diet and fitness regime

Rob Gronkowski on lack of production in first 2 games with Buccaneers: 'I came here to block, baby' 0