Hailey Bieber left her home in Los Angeles in search of some colder weather.

The 24-year-old model was seen enjoying a snowy day in New York City as she grabbed lunch with her best friend Justine Skye.

Looking very cozy in her winter garb, the wife of Justin Bieber was ready to dine in style before doing a little shopping. 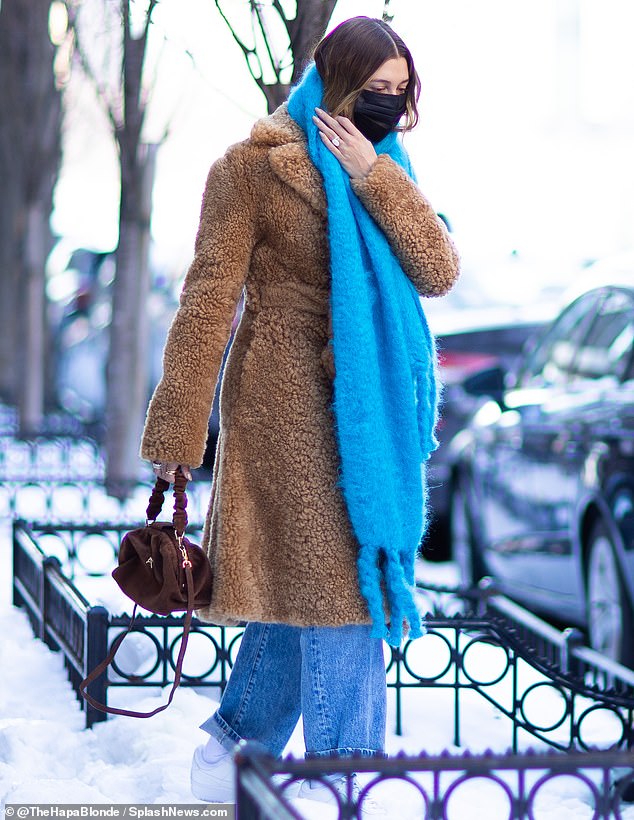 Cozy couture: Hailey Bieber, 24, stepped out in NYC with good pal Justine Skye, doing lunch before a little shopping. She bundled up for chillier temperatures in a plush brown coat and eye-catching blue scarf

Hailey’s plush brown coat looked soft enough to be a blanket as she walked out of a building.

She continued to prioritize comfort as she draped an equally fuzzy scarf around her neck in a luscious shade of blue.

Going basic with the rest of the look she sported simple oversized jeans and some white sneakers, as she carried a micro suede bag. 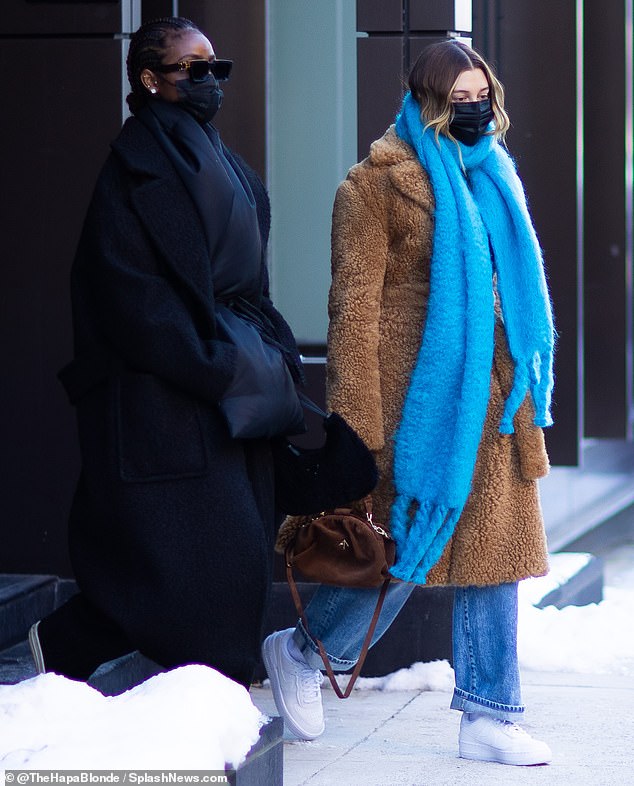 Besties: The longtime friends looked keen to be spending a relaxing Sunday together in the city 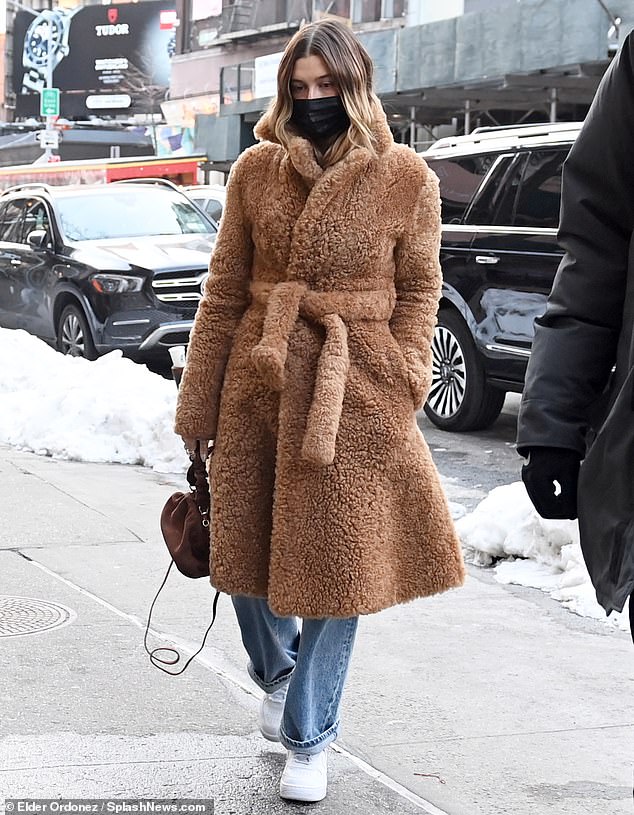 Bear-y warm: The brown coat looked soft enough to be a blanket as she walked out of her SUV

She wore an oversized down coat with a puffy wrap around her neck, dressing up the look with a stylish pair of sunglasses.

The ladies were seen making their way around SoHo as they avoided piles of now melting snow.

Both kept safe in face masks as they briskly strolled through the city before making their way to an SUV. 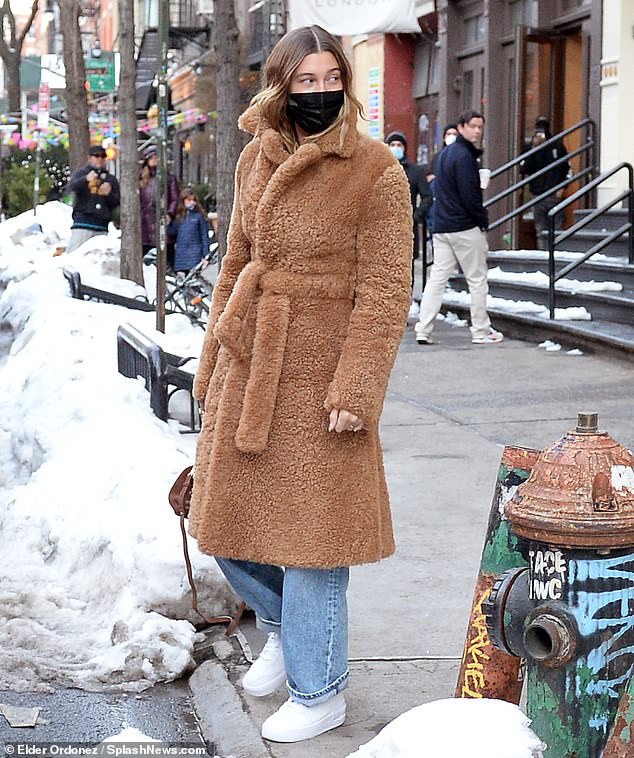 Watch out: Hailey was seen gingerly avoiding getting her fresh white sneakers covered in any unwanted snow while strolling

Her famous friends were quick to gush over their friends vocal capabilities and her catchy new song, Intruder, as both Bieber and Jenner shared her music to Instagram.

No stranger to having musicians in her close inner circle, recently Hailey accompanied husband Justin to a private listening party for his upcoming album which he called ‘the best night of my life.’

Afterwards she and the Yummy singer were seen grabbing brunch in Beverly Hills before making their way to one of their homes.

Also a working woman Hailey’s been busy on the modeling front, recently appearing in Vogue, a new Versace campaign, and additionally as a face of Beyonce’s line Ivy Park. 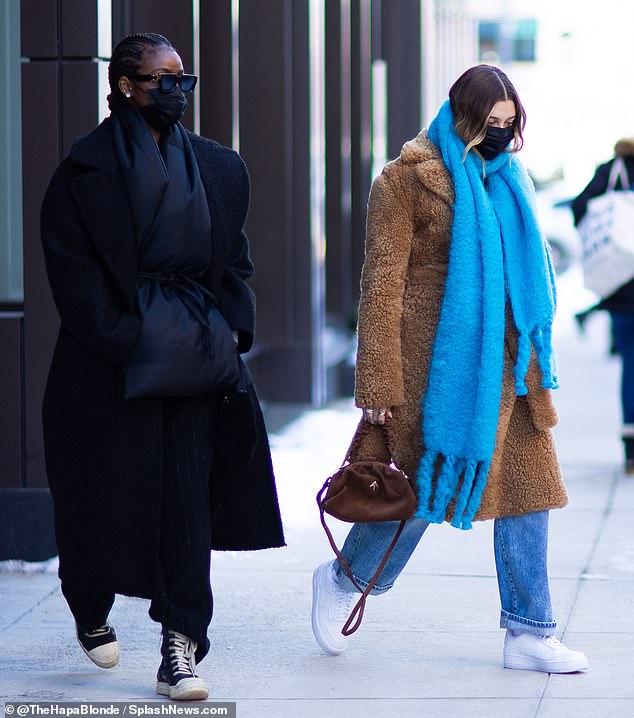 On the go: The model’s life has been full of work obligations, recently appearing in Vogue and additionally as a face of Beyonce’s line Ivy Park Music muse: The daughter of Stephen Baldwin has many musicians in her close inner circle including husband Justin’s heavy hitting group of friends

The couple of two plus years recently sold their Beverly Hills home for just shy of $8M, but still have a large real estate portfolio that includes a $26M mansion in LA and another grandiose home in Justin’s native Canada.

A serious taste for the finer things in life as afforded by his immense stardom, recently Bieber splashed out on a custom Rolls-Royce that was three years in the making.

He was seen being virtually brought to tears after seeing just one of his many visions come to life, this time in the form of a one of a kind ride.

Though he was not present during Sunday’s girl’s afternoon, he continued to show he had Hailey on his mind as he shared a photo of them in matching sweatshirts – one reading ‘Hubby’ and another reading ‘Wifey.’

Demi Lovato could not deny the sweet photo as she commented ‘this is stupid cute.’ 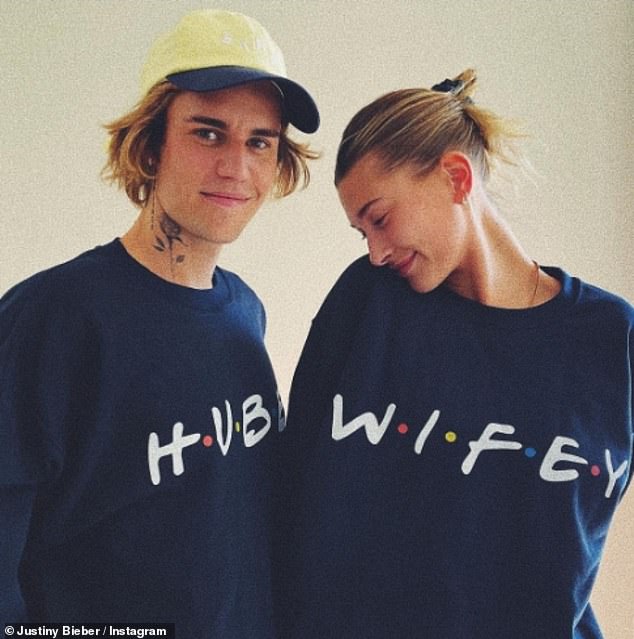 Perfect pair: The smitten couple showed off their new matching sweatshirts with their marital titles written on them as Demi Lovato commented ‘this is stupid cute’; pictured Sunday

Artificial Intelligence breakthrough: Most videos to be made by AI in 'less than a decade' 0