Gwyneth Paltrow, 47, looks sensational as she shows off her bikini body in the Hamptons

She's the poster girl for healthy living in Hollywood, thanks to her wellness brand Goop.And Gwyneth Paltrow certainly lived up to that reputation


She’s the poster girl for healthy living in Hollywood, thanks to her wellness brand Goop.

And Gwyneth Paltrow certainly lived up to that reputation on Sunday, as she showed off her incredible bikini body at the beach in the Hamptons.

The 47-year-old Iron Man star looked flawless, displaying her fit and toned physique in a striped two-piece, as she took to the waves to splash about. 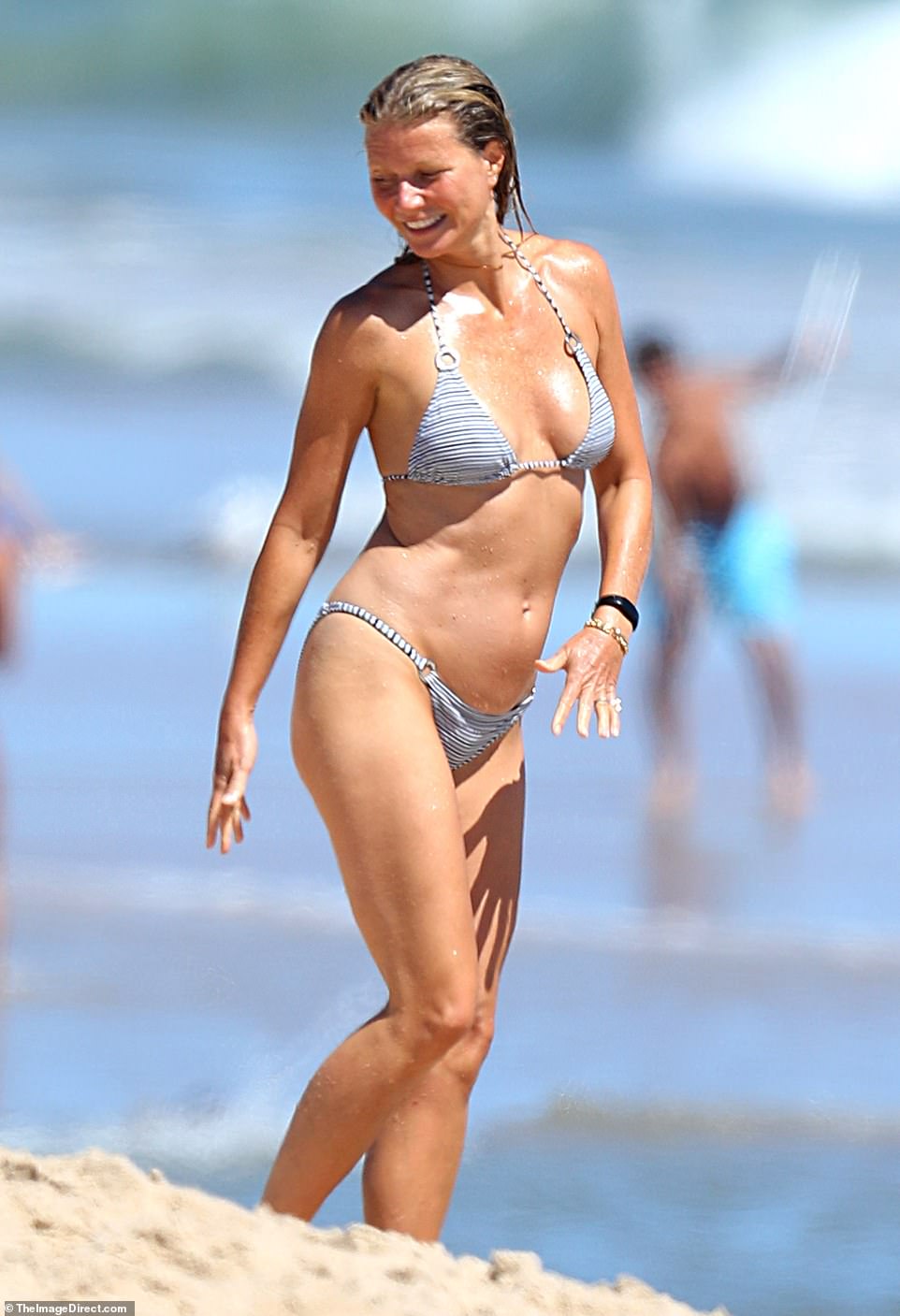 Stunning: Gwyneth Paltrow shows off her incredible bikini body while relaxing with pals for a beach day on Sunday in the Hamptons

It appeared that the mother-of-two had arrived for a relaxing beach day with pals, as she was seen with a beach bag, a sun hat, and a book to read.

Gwyneth is famous for eating a clean diet and doing grueling workouts with celebrity trainer Tracy Anderson, and prior to her beach day, had been spotted taking in some cardio around town.

Over the weekend, the Oscar-winning actress was pictured on a number of occasions going for a jog while out on her own. 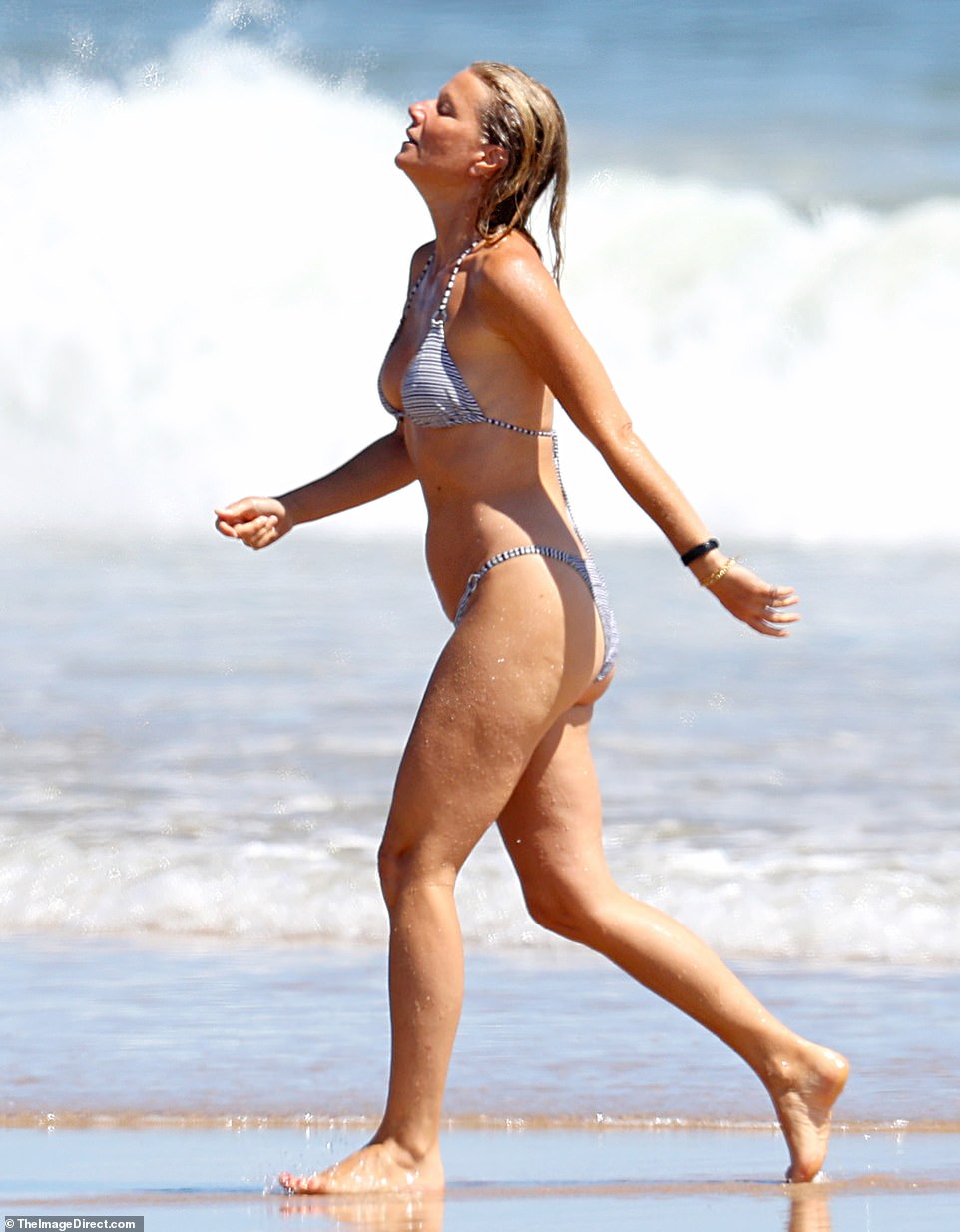 Splashing around: The Oscar-winning actress enjoyed a beach day in the sun with her pals on Sunday

Also spotted there recently has been the likes of Sarah Jessica Parker and Matthew Broderick, Andy Cohen and Jennifer Lopez.

Gwyneth is believed to still reside in her Hamptons home in Amagansett, which she bought for $5,400,000 with her Coldplay ex-husband Chris Martin. 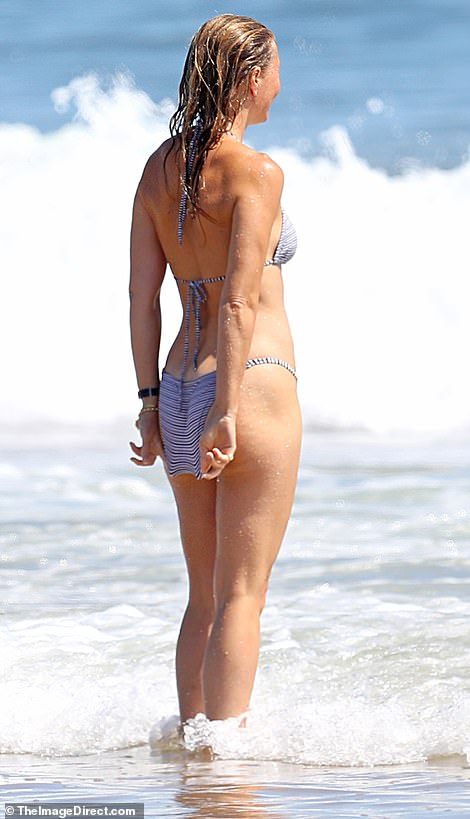 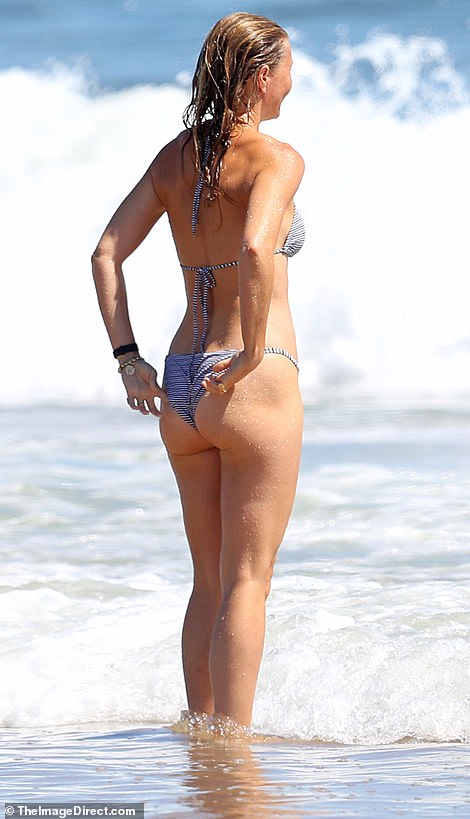 Cheeky! The star was seen pulling her bikini bottoms down as she looked out onto the ocean 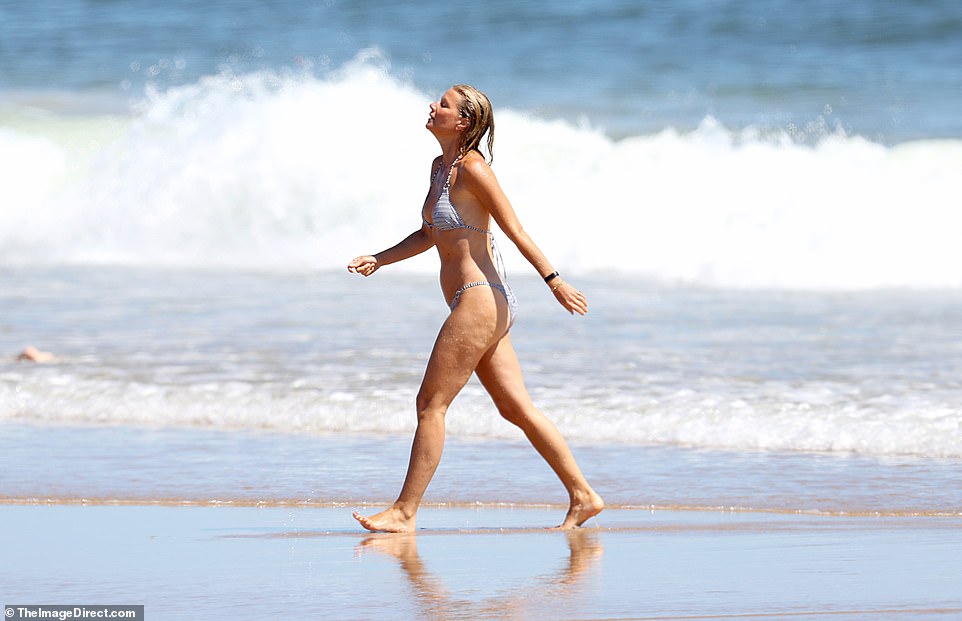 And breathe: The health-conscious star appeared to be in a relaxed state of bliss while walking across the sand 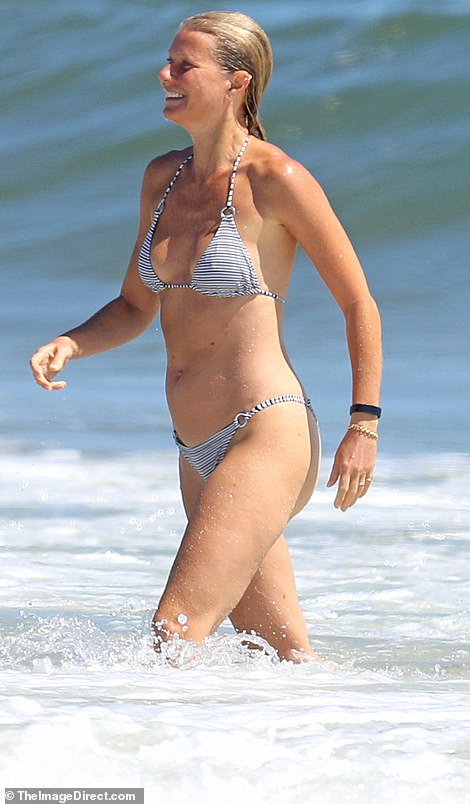 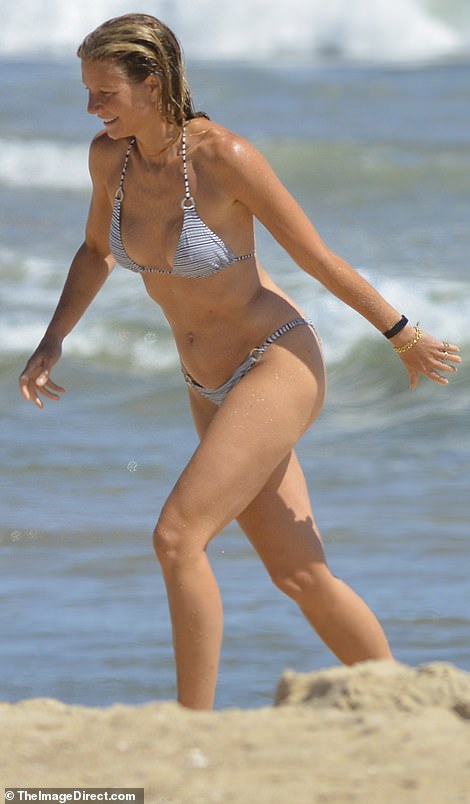 Home away from home: Gwyneth is believed to still reside in her Hamptons home in Amagansett, which she bought for $5,400,000 with her Coldplay ex-husband Chris Martin 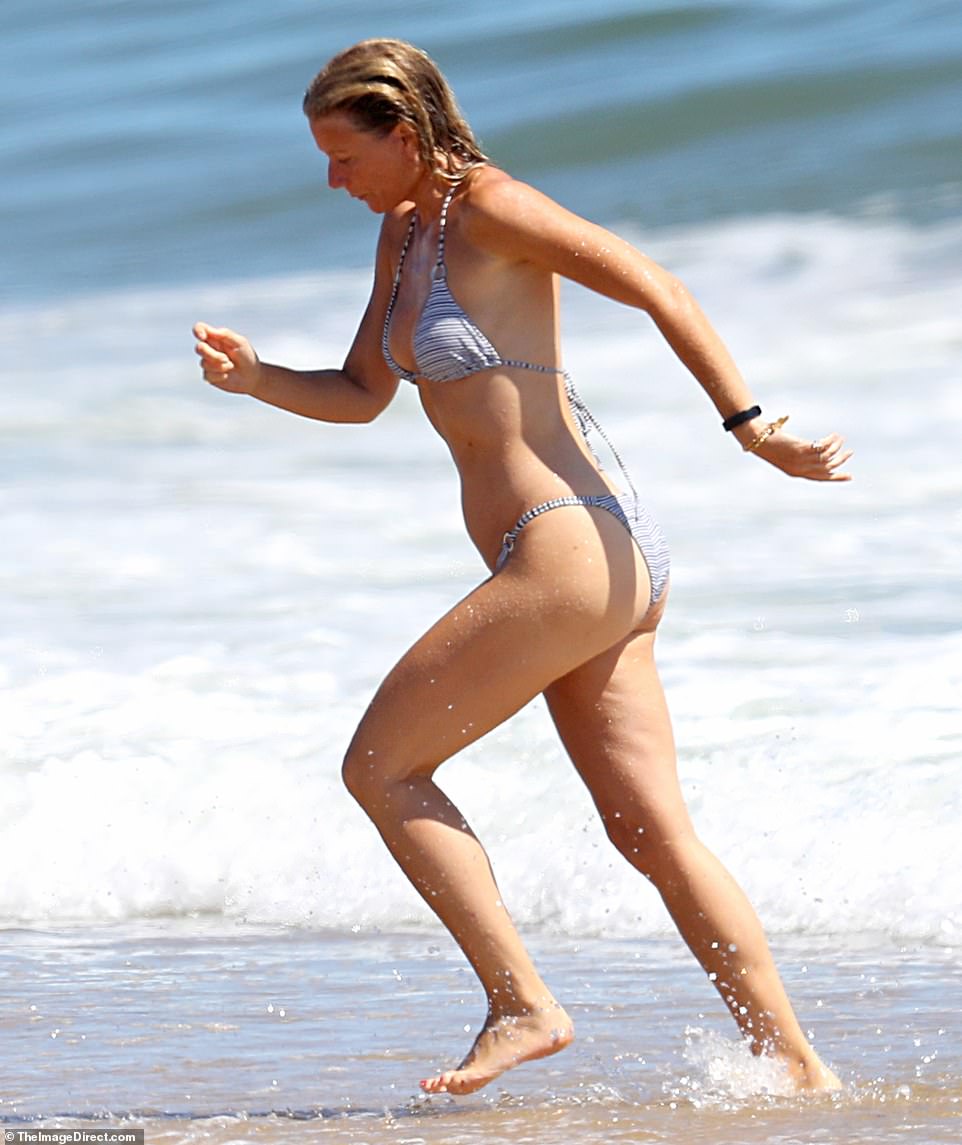 On the run: Gwyneth displayed her athletic physique while running out of the water to the beach

The 6,800 square feet home boasts five bedrooms and have 7.5 bathrooms.

Earlier this month, the movie star was joined by her mother Blythe Danner, 77, and daughter Apple Martin, 16, to talk about two new products from her company Goop in a video shot by husband Brad Falchuk.

The trio sat down in Gwyneth’s garden at her home for the conversation about skincare and ageing. 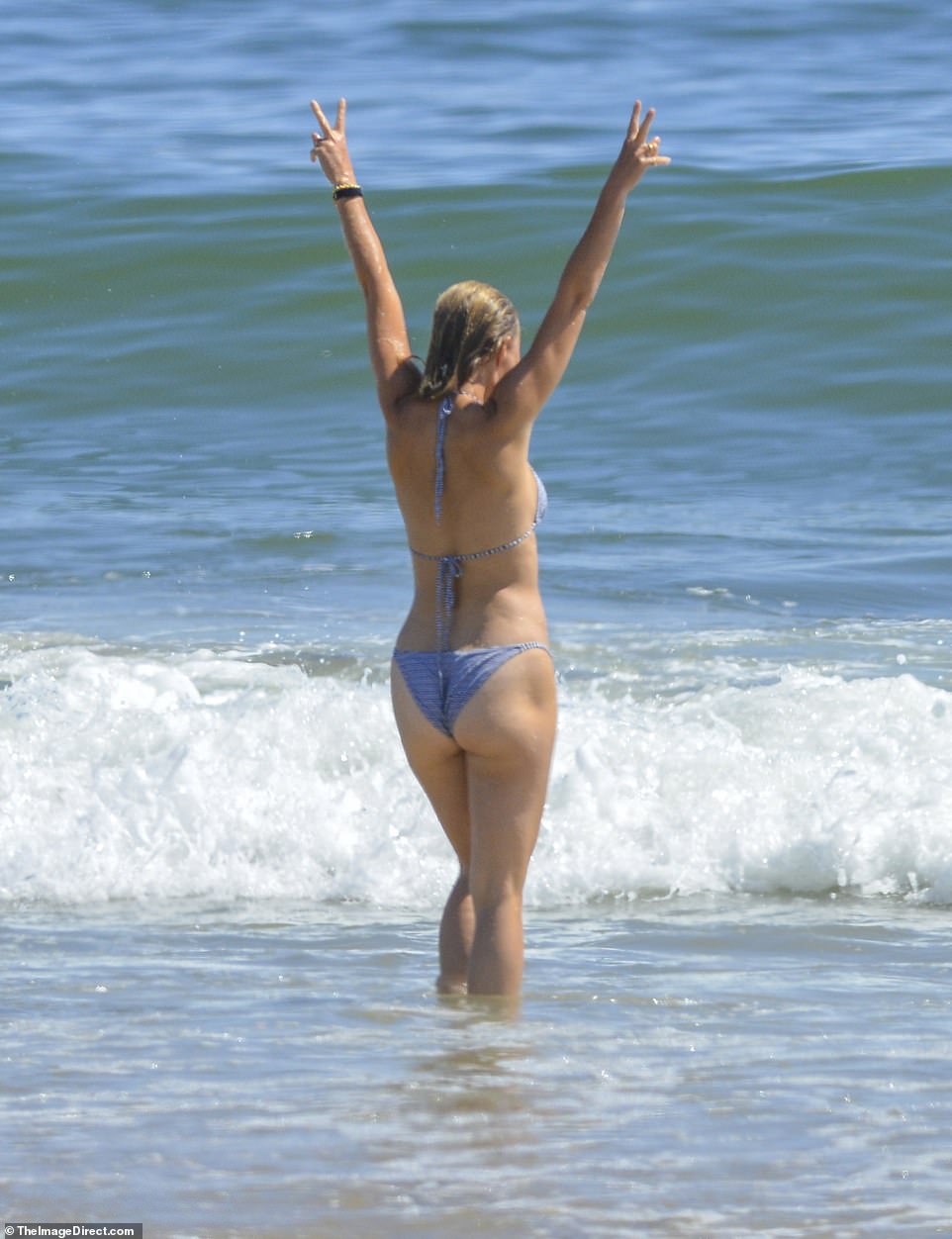 Coming soon to Instagram? The actress appeared to be posing for a photo as she flung two peace signs up in the air 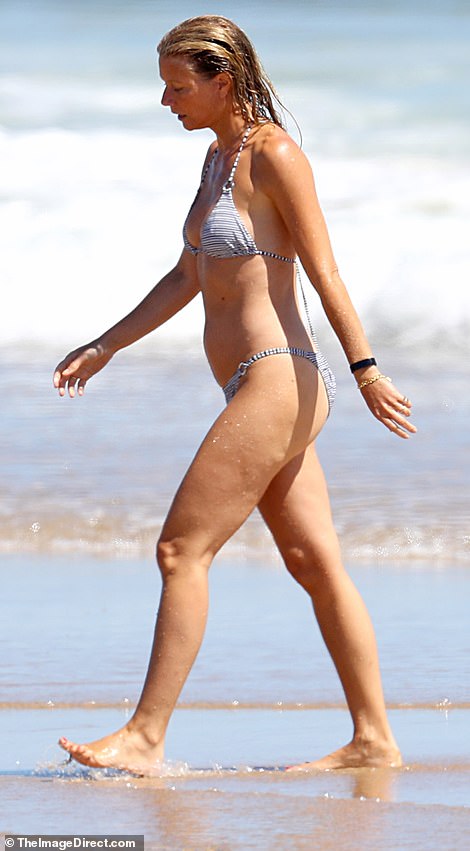 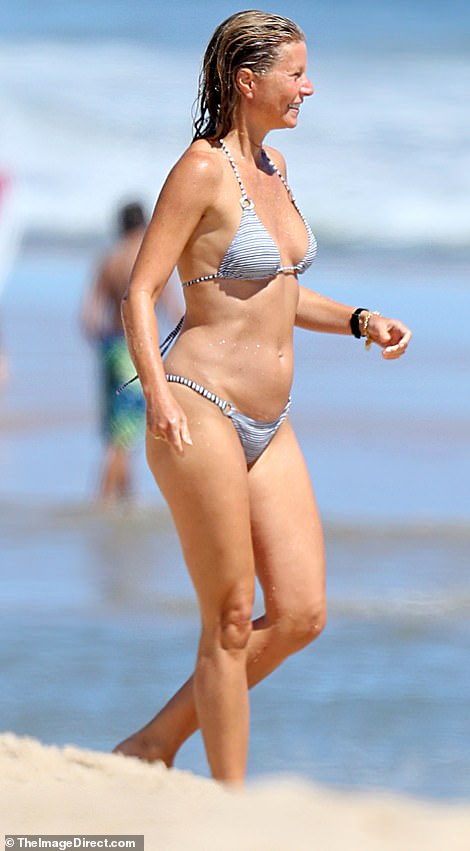 Healthy living: It’s comes as little surprise to know that Gwyneth is famous for her positive attitude towards diet and fitness 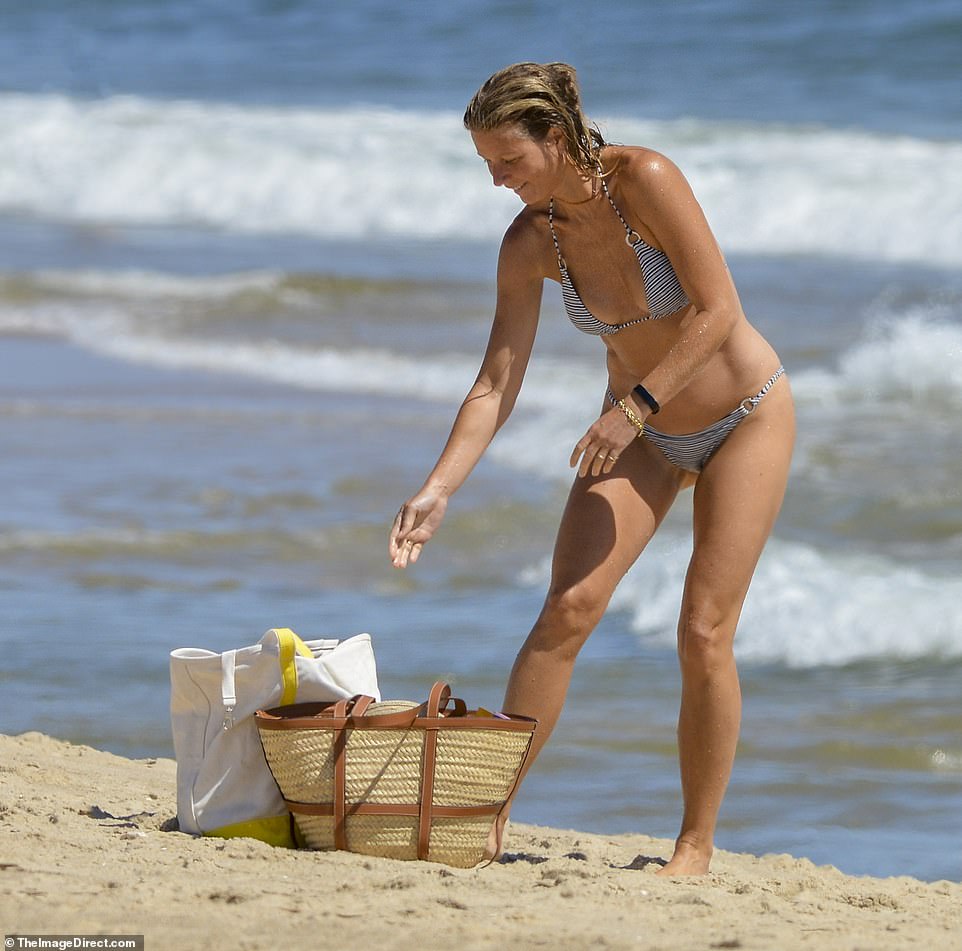 Perfect day: The A-Lister had brought a few beach bags along with a sun had and a book for her day out 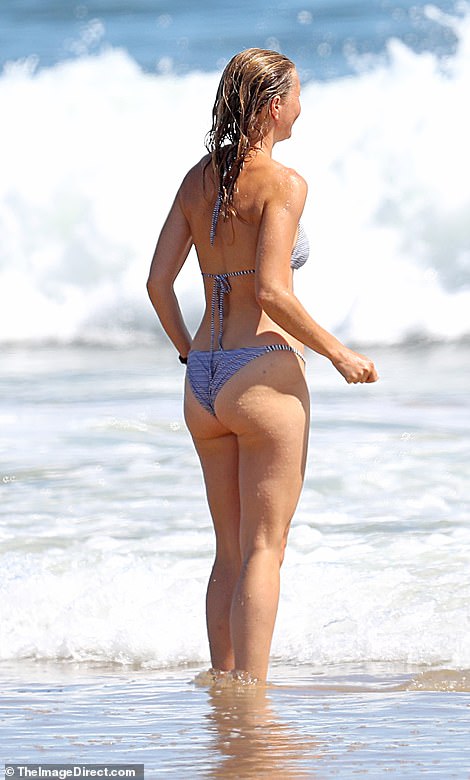 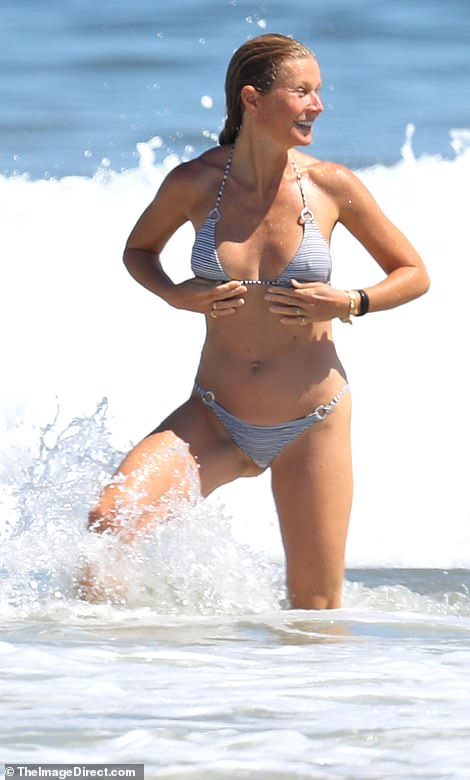 Working it: Gwyneth is famous for eating a clean diet and doing grueling workouts with celebrity trainer Tracy Anderson, and prior to her beach day, had been spotted taking in some cardio around town 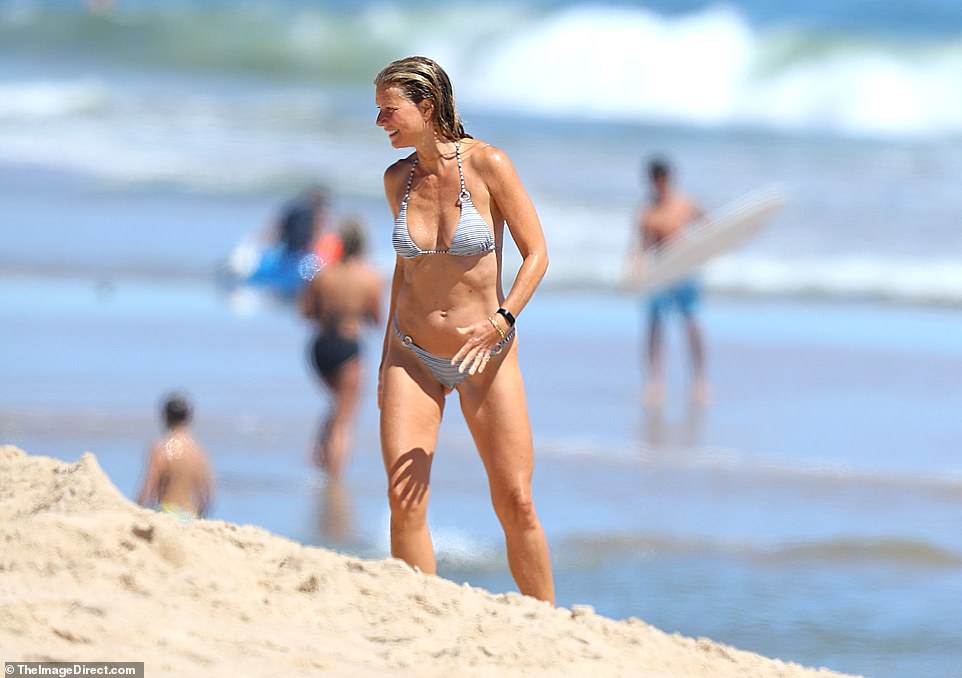 On good form: The lifestyle expert and actress impressed passers-by with her incredible shape

Apple asked grandma Blythe and mother Gwyneth a series of questions, with the first being: ‘What advice would you give your younger self?’

Blythe cheekily answered: ‘Grow up,’ and Gwyneth quipped: ‘Get your s**t together man!’ 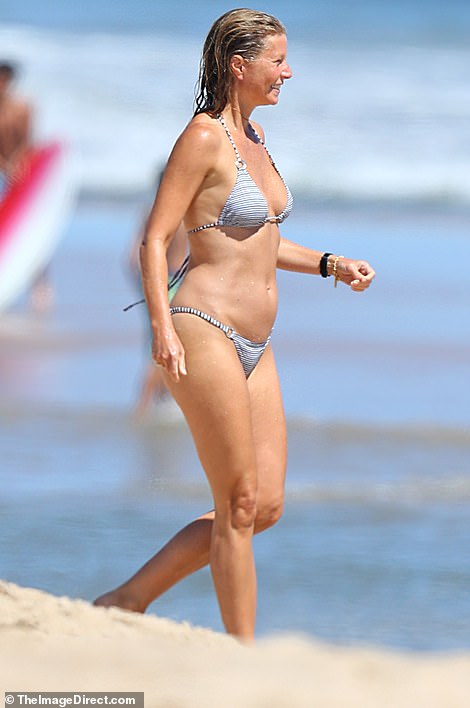 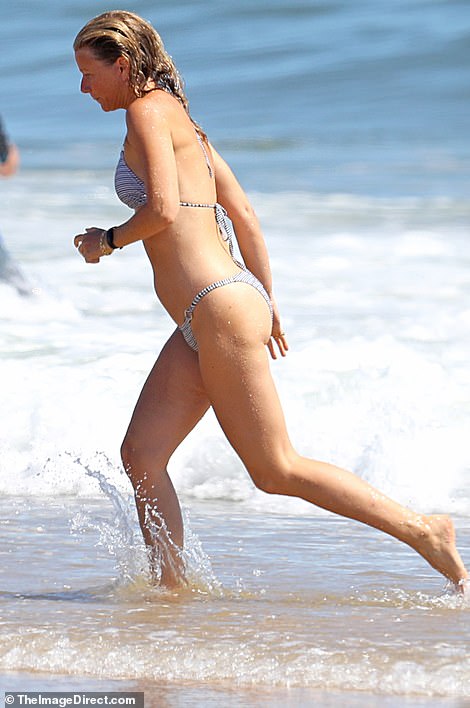 In good company: Gwyneth’s Coldplay ex-husband Chris Martin has also been spotted in the Hamptons recently 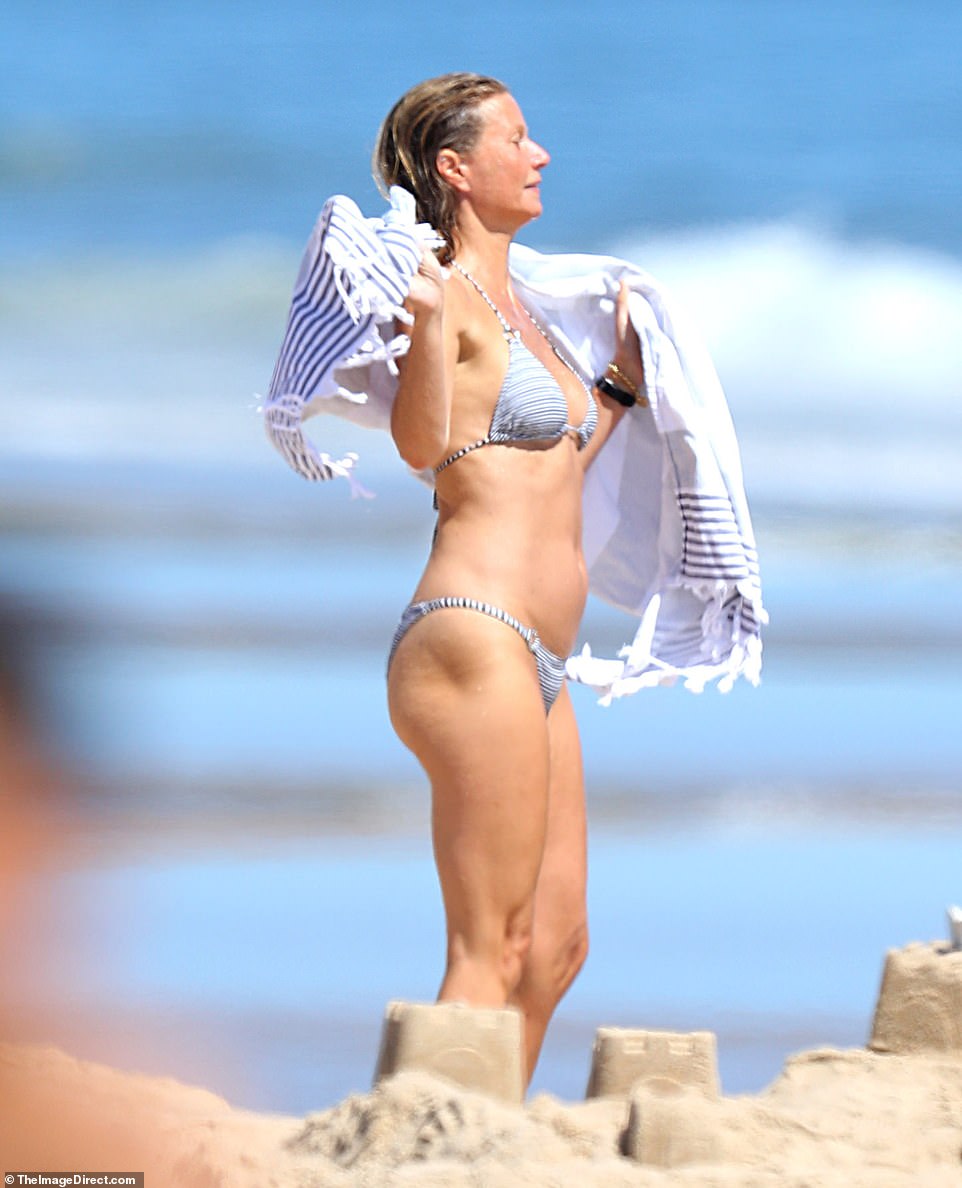 Drying off: Later, the star was seen getting back to her spot on the beach after splashing around

Blythe added: ‘I just put Goop on my lips,’ to which Gwyneth said: ‘Well perfect then you’re in the right place.’

The actress founded Goop in 2008 and it has since gone on to have its own Netflix series called the The Goop Lab With Gwyneth Paltrow and wellness summits.

Dementia: Do your gums look like this? It could increase risk of progressive condition 0