BRAD Pitt weighed in to one of the most controversial movie moments of all time on Sunday at the Golden Globe Awards.

The 56-year-old actor – who opened his stage turn with a joke about being an ageing actor on the way out, was on fine form as he then ribbed his Once Upon A Time in Hollywood co-star Leonardo DiCaprio.

Referring to Leonardo’s iconic drowning scene in 1997 movie Titanic, Pitt quipped: ” I would have shared the raft.”

The blink-and-you’ll-miss-it moment happened as he won the trophy for best supporting actor in a musical or comedy for his role in Quentin Tarantino’s Once Upon a Time in Hollywood.

He spoke warmly of his co-star, revealing his nickname for him, saying: “I want to thank my partner-in-crime, LDC.”

He continued: “You know, before The Revenant, I used to watch, year after year, his co-stars accept awards and get up and thank him profusely. I know why. He’s an all-star, he’s a gent, and I wouldn’t be here without you, man. I thank you.”

“’Still, I would’ve shared the raft.’ – Legend Brad Pitt to Leo DiCaprio re: TITANIC controversy- and thus proving why he’s a legend,” @Lulamaybelle wrote on Twitter. 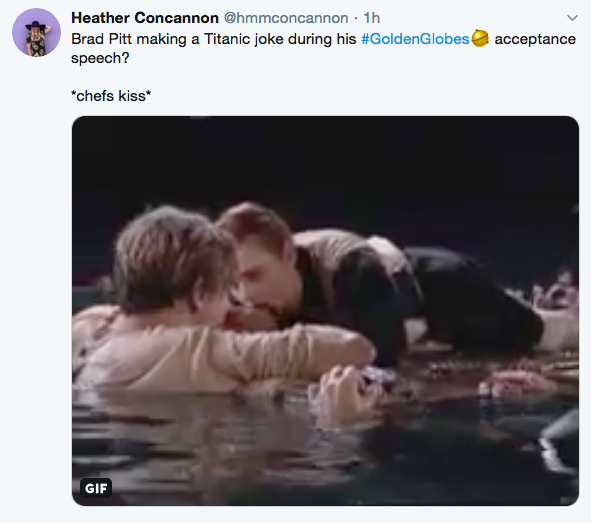 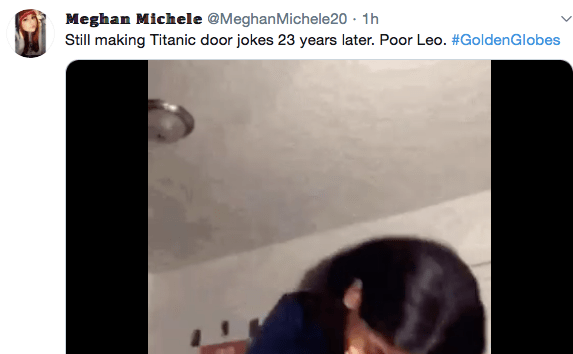 most read in TV & showbiz

Rolling in the dough

Pitt also acknowledged his own parents. “They’re back in the Ozarks,” he said. “I wanted to bring my mom but I couldn’t because any woman I stand next to they say I’m dating, and it would just be awkward.”

The camera panned straight to his ex-wife Jennifer Aniston, to see her reaction to the joke – who laughed.

Aniston and Pitt were married for five years from 2000 to 2005. Aniston split from Justin Theroux in 2017, and Pitt divorced Angelina Jolie in 2016.

“Thank you to the camera person who panned to Jennifer Aniston during this Brad Pitt line,” one delighted fan wrote.

Google Santa Tracker is live NOW – how to follow Father Christmas on a...

Sadistic stepdad forced boy, 8, to kneel on buckwheat so long it grew in...

AN American Airlines flight dramatically turned back with a full tank of fuel less than an hour after taking off from Heathrow Airport. Flight...

BRUNO FERNANDES treated his Manchester United team-mates to dinner as the team prepare to face Chelsea on Monday night. The Portuguese star, 25, headed...

REAL Housewives of Orange County star Vicki Gunvalson continued to shade her former co-star and enemy Kelly Dodd despite being fired from the...

Pregnant Lucy Mecklenburgh thought she’d be induced at 37 weeks after hospital visit but...

LUCY Mecklenburgh has revealed she thought she’d be induced at 37 weeks but has been sent home from hospital to rest as her...

CANCER describes what happens when abnormal cells divide in an uncontrolled way in the body. There are more than 200 different types of...

WhatsApp had a bug that let hackers take over phones with...