Sophie Kasaei was rushed into hospital on Friday to treat her gastroenteritis after falling ill following her recent trip to Italy.The Geordie Shor


Sophie Kasaei was rushed into hospital on Friday to treat her gastroenteritis after falling ill following her recent trip to Italy.

The Geordie Shore OG, 30, returned to the UK on Thursday in excruciating pain and is now bed-ridden following the diagnosis by doctors.

She took to Instagram to reveal the terrifying ordeal, and explained to fans why she had to take an emergency trip to the hospital. 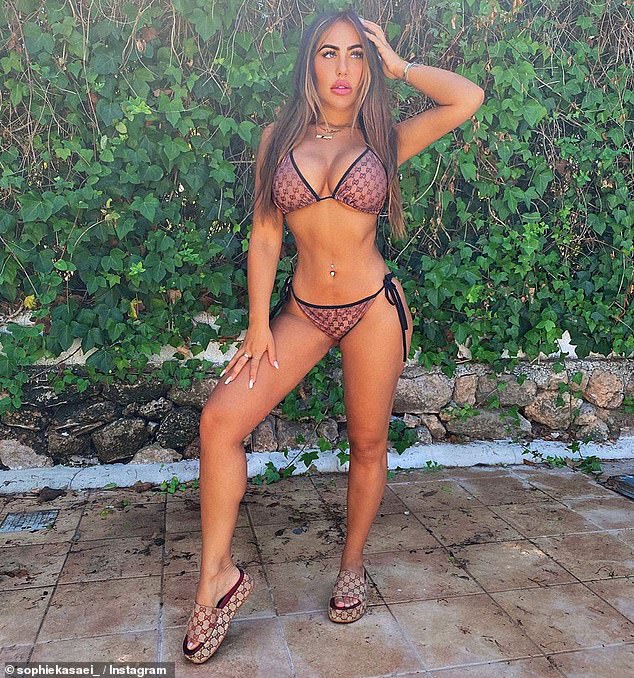 Holiday horror: Geordie Shore’s Sophie Kasaei was rushed to hospital on Friday to be treated for gastroenteritis after falling ill following her holiday in Italy

She returned from her extended vacation in Italy and Spain on Thursday where she partied alongside fellow Geordie Shore cast-mate, Abbie Holborn.

During her return to British soil, she began suffering from incomparable stomach pain that would return ‘in waves’.

In her video she revealed her NHS wristband and hospital PJ’s as she detailed what had happened: ‘Well this morning was eventful. Honestly I’ve never felt pain like that. 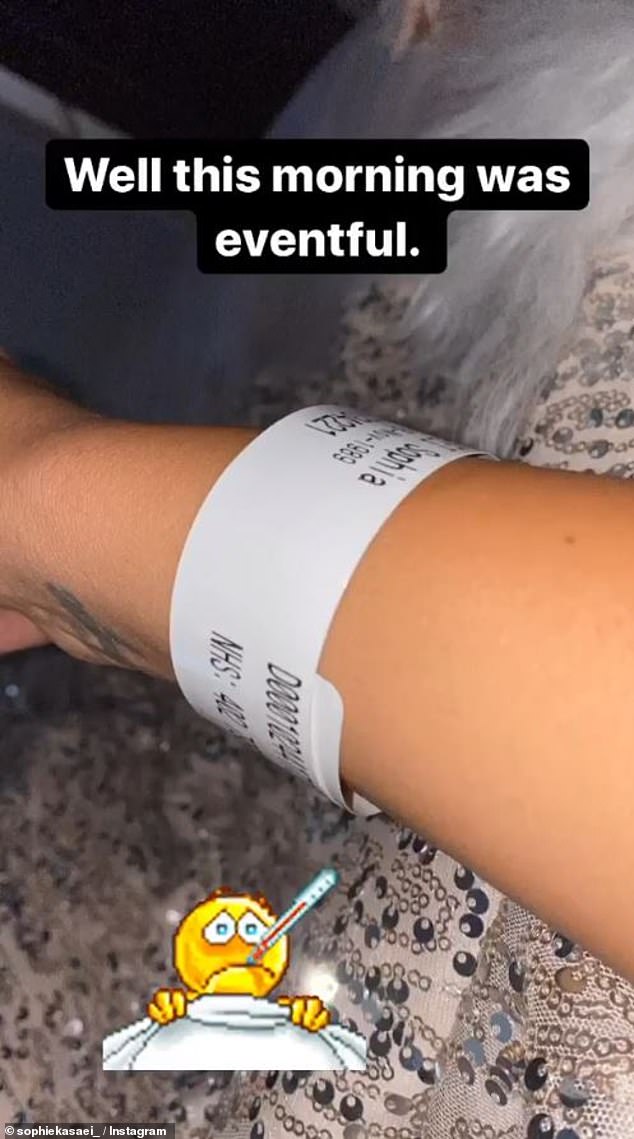 Medical emergency: The Geordie Shore star, 33, revealed that she has ‘never felt pain like that’ after originally brushing off her stomach pain and assuming it was due to a hangover

‘Yesterday when I was away I started feeling this awful pain in my stomach and I thought it was just a hangover, so I brushed it off, and then the pain started getting worse and worse, to the point where I was like “nah something isn’t right here.”

‘It came in waves and then I started being sick and it’s just awful, so then the doctors were like “you need to go to hospital.”

‘If anybody else has had it they will understand the pain, it comes in waves and overtakes, it’s like acid coming up.’ 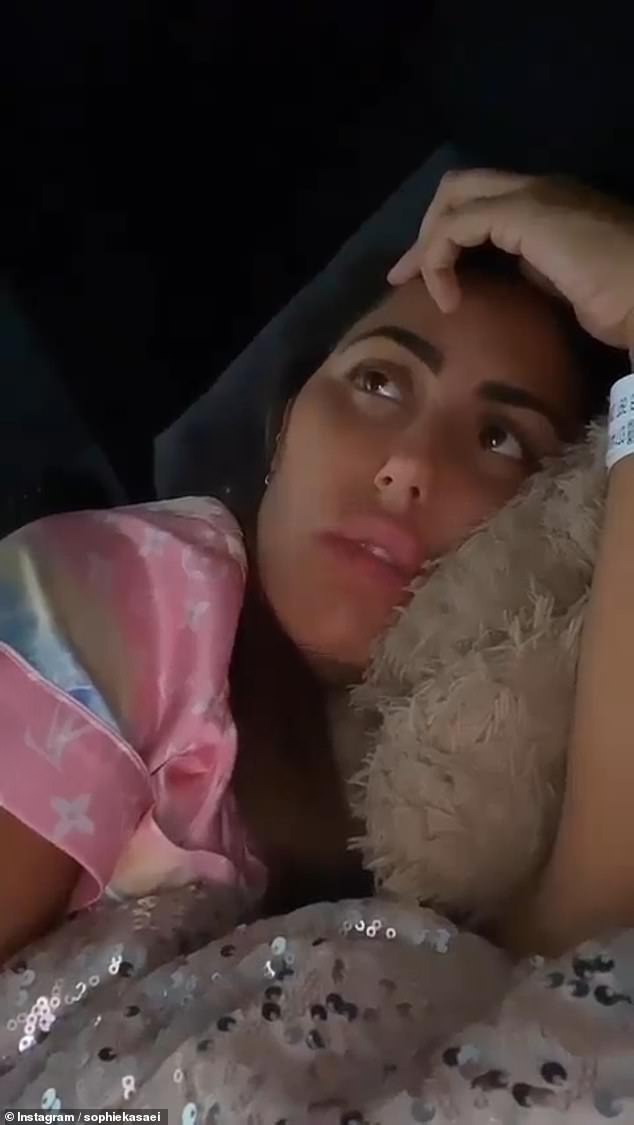 Unbearable: Sophie told her Instagram followers on Friday: ‘If anybody else has had it they will understand the pain, it comes in waves and overtakes, it’s like acid coming up’

She finished her message with a drowsy farewell: ‘Honestly I’m done. Ciao.’

Gastroenteritis is the inflammation of the stomach and small intestine.

There are a variety of symptoms including diarrhoea, fever, vomiting and extreme abdominal pain, and cases usually last under two weeks. 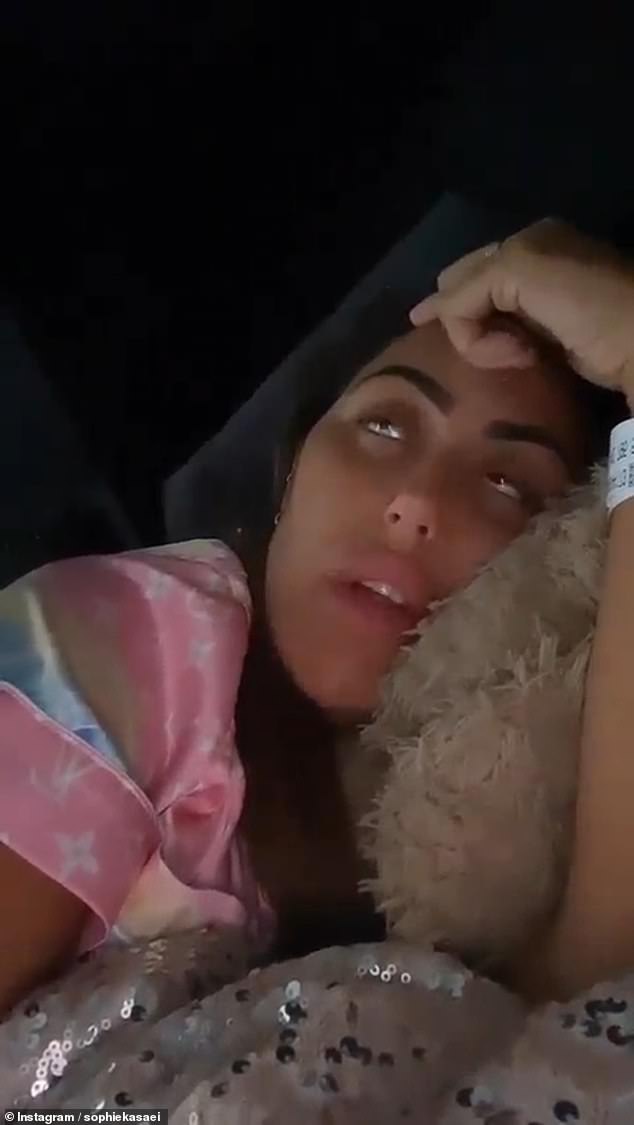 Gut feeling: Gastroenteritis is the inflammation of the small intestine and stomach and symptoms include diarrhoea, fever, vomiting and extreme abdominal pain

It was only in July that Sophie divulged her excruciating battle with endometriosis.

The MTV beauty compared her horrendous ordeal to someone ‘stabbing you in your ovaries’ when she shared her experience with her followers.

Endometriosis is a condition resulting from endometrial tissue outside the uterus which causes pelvic pain and is often related to menstruation.

The condition affects women of all ages with some of the main symptoms being pelvic pain, period pain and pain during or after having sex.

According to Sophie, she had been experiencing a flare up which resulted in extreme bloating and pain to the point that she couldn’t perform her daily routine.

She had to use peppermint and ginger tea to heal her bloating, but to no avail, as the star was left distressed by the ongoing ordeal.

Endometriosis occurs when cells in the lining of the womb are found elsewhere in the body.

Each month, these cells react in the same way as those in the womb; building up, breaking down and bleeding. Yet, the blood has no way to escape the body. This causes pain and scar tissue to build up.

Symptoms include pain, heavy periods and fatigue, as well as a higher risk of infertility, and bowel and bladder problems.

Its cause is unknown but may be genetic, related to problems with the immune system or exposure to chemicals.

Sophie revealed that she had to leave a personal training session and come home because the pain became so unbearable and she let her followers know how she was feeling.

She said: ‘I want to say to anyone who suffers from endometriosis, like it is so painful! I literally was just fine and I’ve started to cry again.

‘I’ve just done a PT session and I had to leave because the pain that I just felt driving home, honestly I can’t describe that pain.

‘It’s the most excruciating pain, it’s like someone’s got a knife and is just stabbing you in your ovaries.’

Sophie disclosed her struggle as she nestled into the sofa and her mother comforted her with a hot water bottle.

The TV personality vowed to help other girls who are suffering from the condition, after announcing that she suffers from endometriosis earlier this year.

‘I’m literally still shaking because it’s so painful and I just want to talk about endometriosis because it is so painful when you are on your period.

‘I’m usually alright in the month when this time comes, but I wouldn’t wish this upon anyone.

‘I can’t wait to just get this sorted.

‘I just need the COVID thing over so I can get this sorted because I can’t live with this pain.’ 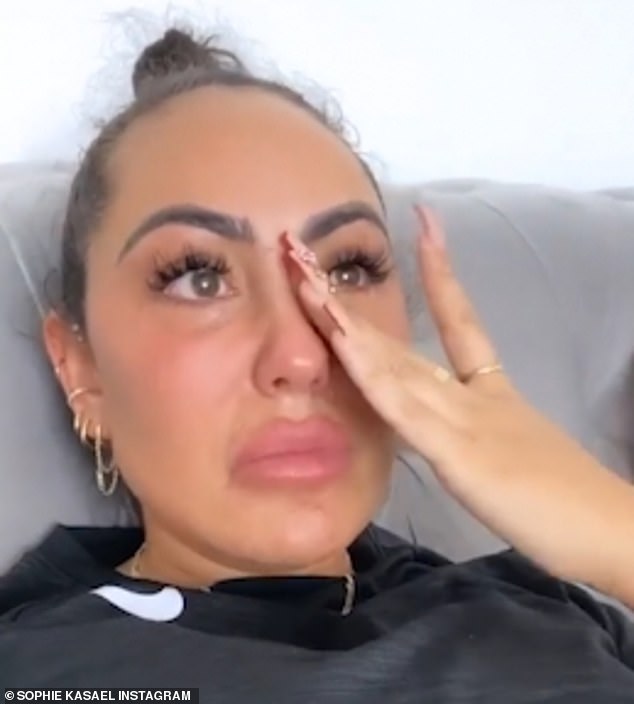 Health battle: Sophie revealed in July that she suffers from endometriosis which is a condition where endometrial tissue outside the uterus cause pelvic pain especially during menstruation

Tesco: How to access free food via app and make huge savings on groceries 0